Georgia Tech head coach Geoff Collins doesn’t believe in looking back — at least no further back than the previous game film so as to make corrections.

He’s laser-focused on moving ahead and knows you can’t see what’s ahead if you’re looking behind you.

“We don’t worry about what happened yesterday, we don’t worry about what happened an hour ago,” said Collins in his postgame comments following last Saturday’s overtime loss. “Every single day matters in the maturation of this program and these guys have so much room to get better and they will. They’re committed and they have the right mindset to do it.”

There are plenty of positives off which to build:

But most important was the players’ excitement in taking head on the challenges of the upcoming bye week.

“The first thing we need to do is watch the film and correct the things that we messed up on,” said Camp (three receptions, 71 yards, first collegiate touchdown – pictured below). “The next step is to focus and stay optimistic on what we still have to come.” 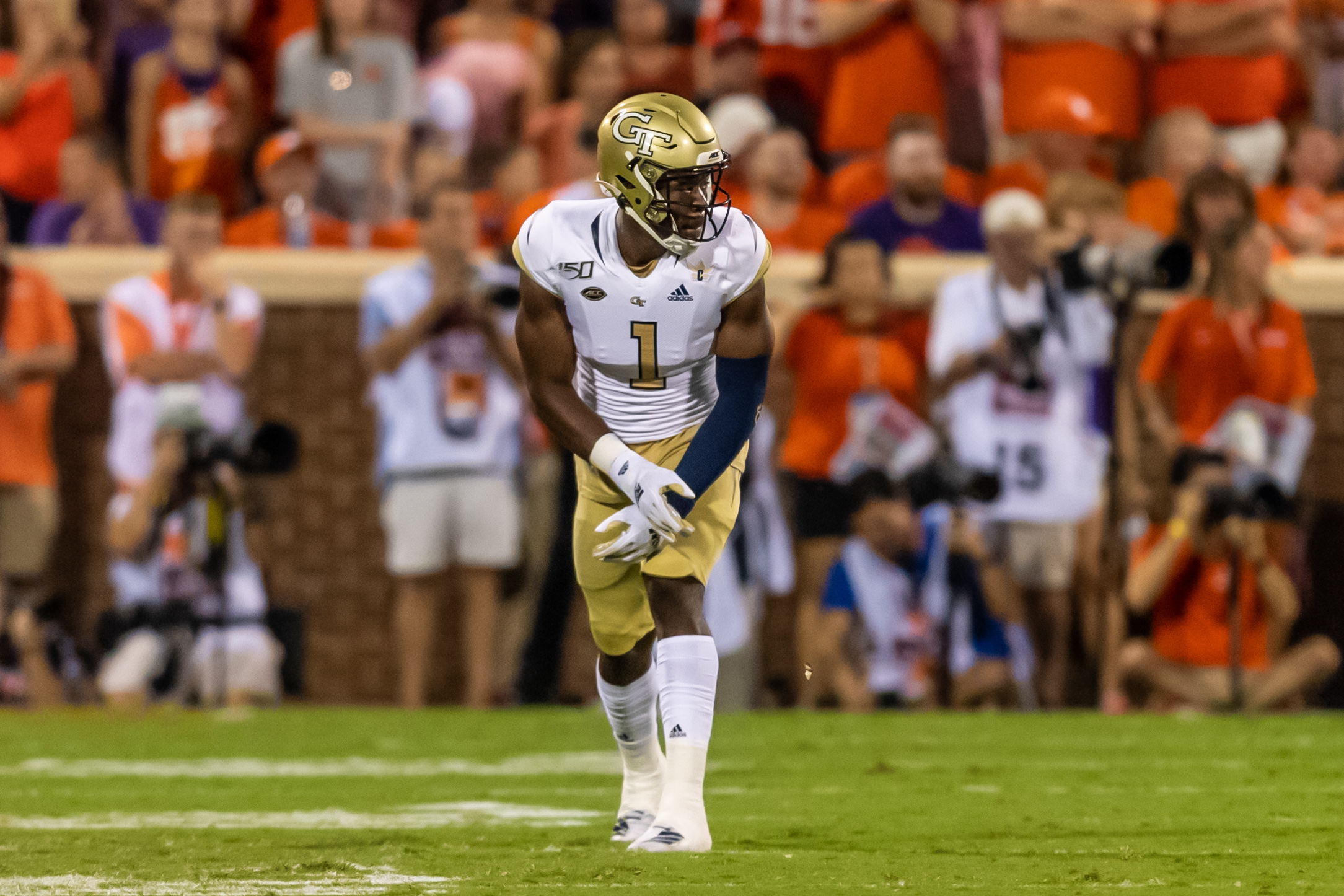 What’s to come includes next Saturday’s visit to Philadelphia to face Temple, Collins’ former team, which he built into the big brother college football-wise in the City of Brotherly Love, and, loaded with his recruits and players he helped develop, is coming off a 20-17 win over No. 25 Maryland.

Collins is just beginning putting the Jackets on the same path that he put the Owls on and expects a similar ascension.

“We had a really good run (at Temple),” he recalled. “We inherited a very young program when we took over, that didn’t have a lot of seniors — very similar to what we have now — and the first year we won four of the last five, the second year we won eight of the last 10, six of the last seven, and got better every single week. We were recruiting at a high level. I’m looking at the two-deep and over half the guys that are players on the team we recruited, developed the rest of them. Just turning on the film, you’re proud of them.”

Collins sees a parallel with the Jackets and is already seeing a positive results on the recruiting trail.

“We finished strong recruiting in January. A lot of the guys that got here mid-year are actually playing a lot for us right now,” he said. “We’ve had a lot of elite players decide to come back home … (Florida transfer) Antonneous Clayton, (Notre Dame transfer) Derrik Allen, (Michigan transfer Myles) ‘Spider’ Sims, (Miami transfer) Marquez Ezzard. We’re excited about them and then we’re actively recruiting a really, really strong class to fill a lot of needs that we have around the program.”

One area where the Yellow Jackets excel is the attitude in the locker room and on the practice field, where an invigorated and united group took the field this week and took the next steps in its improvement. Motivation and energy was not a problem.

“We talk all the time about being actively engaged in the success or positively affecting the guys around you,” he added. “You look at the guys that have worn the jersey No. 90, obviously in honor of Brandon Adams. Nathan Cottrell, Chris Martin and Tyler Cooksey exemplify what we look for in this program. They’re not playing a ton offensively or defensively but just their impact on this team through their play on special teams is really special.”

Collins is proud of guys who have gone out of their comfort zone or went above and beyond in displaying energy and effort.

He pointed out the unselfish play Camp made with his block on the perimeter that freed up Mason for a game-tying 25-yard touchdown run in the fourth quarter last Saturday.

On special teams, Collins raved about the contributions of Cottrell.

“He’s the first guy down on kickoff coverage, he’s the enforcer for us into the boundary, flying down out of the end zone on every single one,” Collins said. “He’s running close to 23 miles per hour on each one, and then he’s the gunner on the punt team and making key stops for us, downing the ball inside the 10 yard line, making key coverage tackles or setting up someone else to make a big-time play. It’s who he is every day in the locker room, who he is, sideline demeanor, the work ethic, the attitude. Everything that you want in a college football program, in this program, is exemplified in Nathan.” 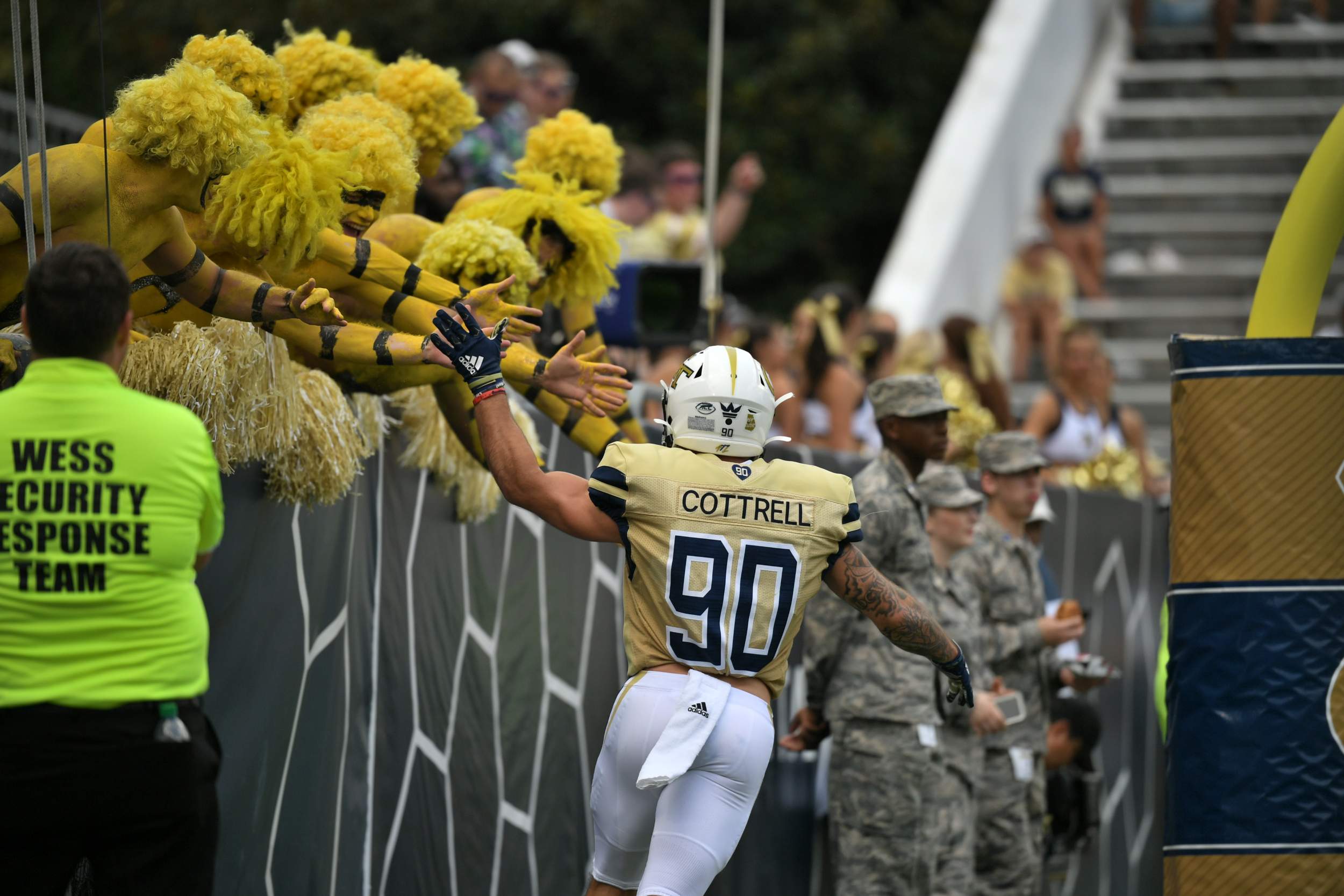 The Jackets’ unleashing of Oliver in the role of kickoff returns spoke not only to Collins’ and his staff’s ability to think outside the box, but also of the sophomore’s willingness to do whatever it takes for the greater good. Oliver was electrifying, taking a pair of kickoffs 96 yards, including a late 52-yarder that set up the overtime-forcing field goal.

Collins stated that Oliver being back there at all is a credit to his taking the initiative in pre-practice special teams warmups, where he brought his returning talent to light.

“Part of our process every single day in spring ball and every single day during the week in preseason, while everybody’s getting to the practice field, we go out to Rose Bowl practice field and we have a specialists’ period, where our punters and kickers kick to the returners every single day before practice,” Collins said. “Tobias invariably gets there early, he catches about 5-to-10 kicks then runs back and does quarterback-center exchanges, while we’re getting ready for our special teams walk-throughs. He has a knack for it and, obviously, he’s a tremendous athlete and we’re going to use all of our guys the best way we can in every phase.”

Development of players’ skill sets is paramount, but so is the development of the players’ physically. Collins pointed to the job that strength and conditioning coach Lewis Caralla has done in transforming Georgia Tech’s bodies. Last year, the Yellow Jackets ranked 115th out of 132 teams nationally in average weight for players on the field at any given time (second-lightest among Power 5 programs, according to SportsSource Analytics). After nine months of the “Lew Effect,” as Georgia Tech players often call it, the Jackets’ bodies have transformed. For example, last year, Tech’s offensive line averaged 6-4, 283 pounds per man. This season, the o-line checks in at an average of 6-4, 310.

“The importance of development, Lew Caralla, has done a great job with the guys,” Collins said. “We’ve talked about the offensive line and getting them up to the level that they need to be at. The work in progress is every single day in every phase of the program. We’re blessed to have a lot of great young men that come to work every single day with an unbelievable attitude to try to get better. The key piece of it is the young men that we have. They’ve got the right attitude to get better, to pour everything into improving in every phase of the program.

“We’re building a program,” he added. “These guys work so hard and the future is bright. We’re going to keep coaching, keep developing, keep recruiting at a high level so that as we move forward in this program, it’s all something we’re going to be very, very, very proud of.”

Director of athletics Todd Stansbury already is. He shares Collins’ vision and his message to any doubters is to simply look at his track record.

“In watching (Temple) play last year and the history of (Collins’) teams, they get better,” said Stansbury. “What he’s done in the past shows our future is bright.”