THE FLATS — The long ball, especially the home run, was the hallmark of Georgia Tech’s 2019 season.

It was such a big factor that they were 13-3 in games they homered once and 16-3 they went yard at least twice. More telling was that they were only 12-11 when not hitting a home run.

But this is the postseason. It’s a new season and you can throw regular-season trends out.

On Friday night in its NCAA Regional Opener against Florida A&M, No. 3 Georgia Tech banged out 15 hits, 14 of them singles, the other a double. Still, the top-seeded Yellow Jackets had little difficulty disposing of the Rattlers, taking what was given to them all game, and using it to score early and often quite often late to pull away, winning 13-2. 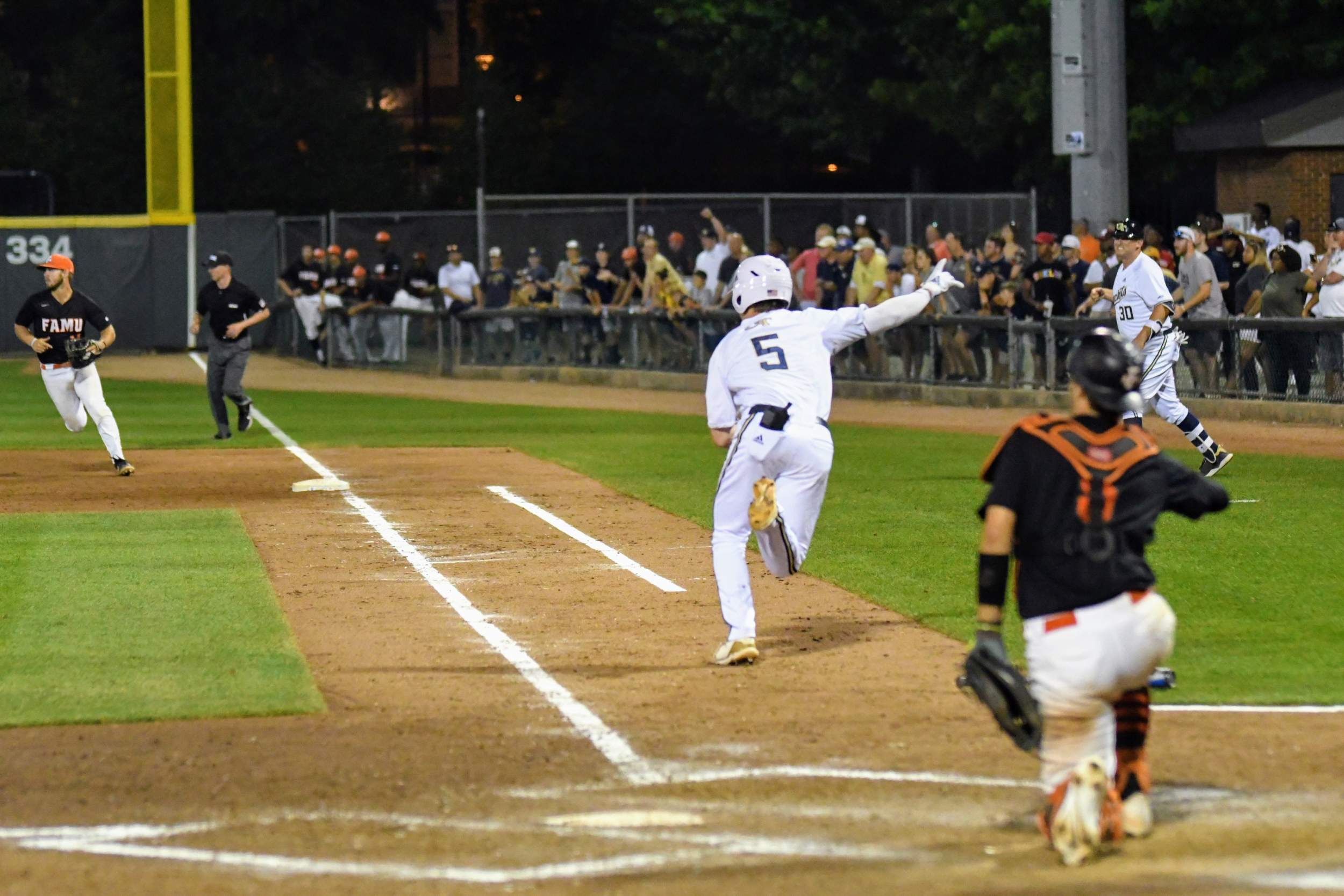 Playing small, more station-to-station might be different for this team, but the method was not.

“I would say that kind of speaks towards what we do as a team — we see pitches, we grind at-bats and we try to get on base any way possible. Today it was a lot of walks and singles,” said first baseman Tristin English, who went 4-for-4 (his second four-hit game of the season), with a season-high-tying five RBIs, including the Jackets’ lone extra-base hit, an eighth-inning three-run double that closed out the scoring. “Their pitchers threw a lot of pitches right down the middle for us to punish but credit to our hitters and myself for sticking to the game plan, staying up the middle, not trying to hit the long ball and take what the pitchers give us.”

Colin Hall added three hits including a two-run single, and Michael Guldberg, Kyle McCann and Austin Wilhite each had a pair of hits for the Jackets.

Rattlers pitchers appeared rattled right off the bat and Tech cashed in. 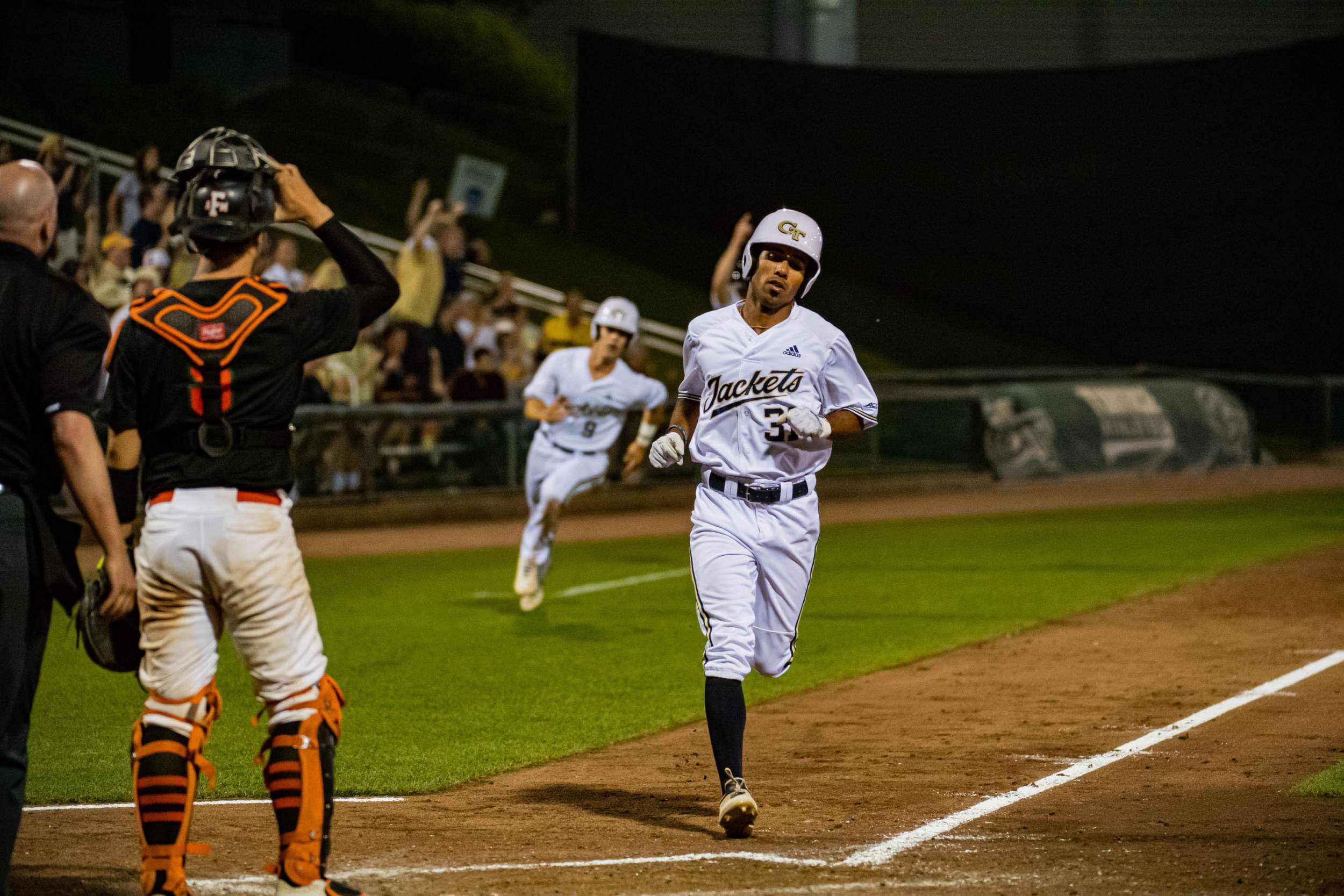 FAMU starter Kyle Coleman (6-6) walked the first two batters he faced in each of the first two innings and all four came around. Catcher Kyle McCann had an RBI hit in the first and shortstop Luke Waddell did so in the second as GT built up a quick 4-0 lead after two. Hall led off the third with a single and came around to score to make it 5-0. He’d add a two-run single to cap off a five-run seventh.

The seventh-inning knock, which gave him his sixth three-hit game of the season, typified the Jackets’ grit, as he fouled off four pitches at 3-2 before singling up the middle.

“I got into a deep count and just kept fouling off fastballs,” he said. “I knew (Coleman) would make a mistake eventually and miss over the middle and I got a barrel on it.”

Starter Amos Willingham (8-2) was the beneficiary of the offense and was quite stingy in his own right, allowing two runs on six hits over six-plus innings, striking out four while walking two (he also hit two batters). While he had only one clean inning, Willingham made big pitches, inducing inning-ending double plays in the second and third innings — key shutdown innings for the Jackets — and only faced more than four hitters in the two-run fifth.

“I was proud of Amos to just give up two runs,” said Jackets head coach Danny Hall. “He was in some tough spots but made his pitches when we needed him to keep that lead. (I’m) happy to win and move on to get a chance to play Auburn in the winner’s bracket game tomorrow.”

Willingham, who left after allowing a leadoff double in the seventh, was a little less than satisfied with his outing, the fifth time he’s pitched at least 6.0 and the second straight start allowing only two runs over six (he did the same to Notre Dame in the ACC Tournament opener).

“I would say I was a little disappointed in myself, just the way I didn’t command the baseball,” he said. “They did a good job of not helping me out when I did throw pitches that were close to the plate. As a pitcher, you’re not going to have your best stuff every day and you just have to work with whatever you have. So I tried to attack their guys with my fastball and my curveball.” 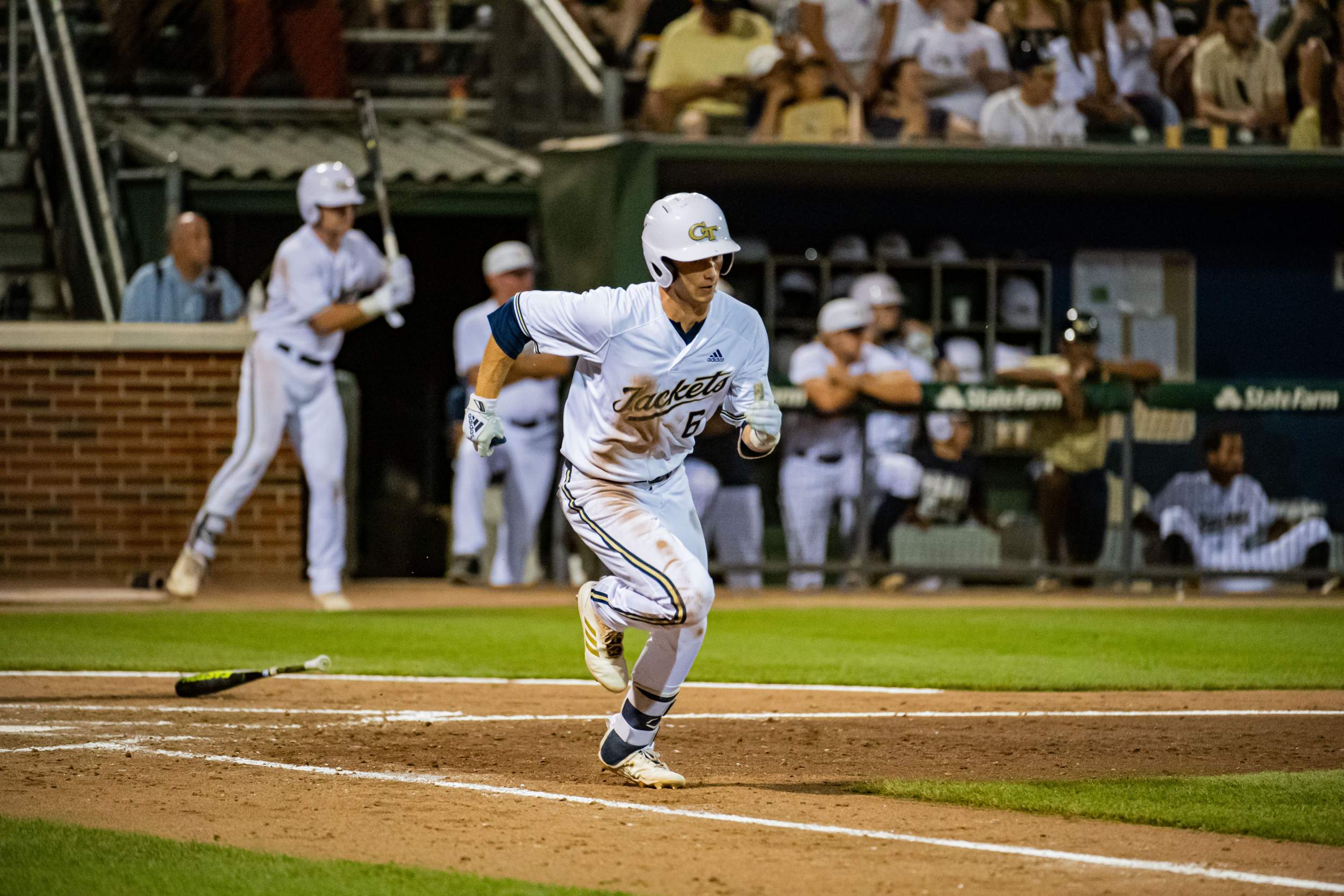 Jonathan Hughes retired the side in order in the seventh then Jake Lee and Robert Winborne each threw a scoreless frame to close it out.

Georgia Tech finally broke things open, plating five in the seventh and three more in the eighth. They, again, got help from FAMU pitchers, with three straight walks loading the bases in the seventh, and two walks helping load them in the eighth, when they finally got their extra-base hit, the bases-clearing double by English, which closed out the scoring.

The Jackets advance in the winner’s bracket and will play Auburn Saturday night at 7 p.m. The Tigers, who the Jackets swept during the year, 9-3 on April 2 in Auburn, then 11-6 two weeks later at Russ Chandler, littered the basepaths in their 16-7 rout of Coastal Carolina, earlier Friday.

The Jackets are not counting on getting the same kind of assistance from Auburn that they got from FAMU — 13 walks, four error.

They also aren’t counting on being held to one extra-base hit — something that has now occurred in back-to-back games for the first time since February 23 and 24, the final two games against UCLA, and 26th, the ensuing midweek game against Georgia State — although the Tigers held the Jackets without a homer in their two meetings — one of only two teams to do so which has met Tech more in than one game (Virginia Tech was the other).

Then, again, it’s the NCAA Tournament. You move on in whatever style you need to. 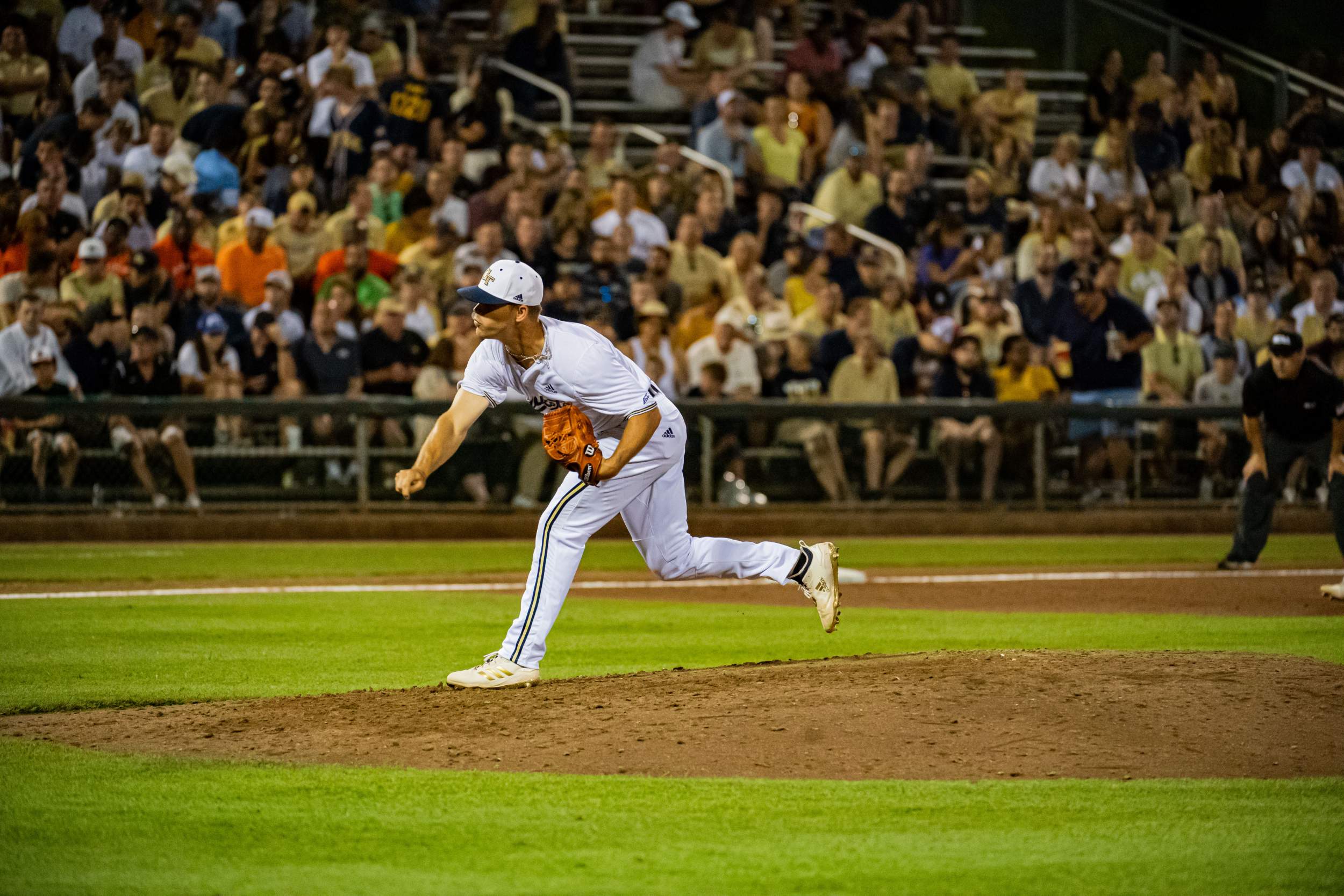 Tech’s resilience may be further tested if Waddell is unable to play. He left in the sixth after getting twisted up on his swing, but Hall said there’s nothing structurally wrong and is something he’s seen before.

“It’s the third time it’s happened this year, so I know some of the guys here have seen him do it,” he said. “It’s just weird. I don’t know what happens, but structurally his knee is fine. He was walking around after the game, so we’ll see how he feels tomorrow and see if he can go.”

Freshman Charlie Benson, who took over for Waddell mid-at-bat in the 6th and finished the game at short, performed admirably in his postseason debut.

Regardless, Hall expects a challenge against an Auburn team he knows very well that opened very, very well.

“I thought they played really well today. I thought they swung the bat well and probably (had) some guys they’d been counting on all year to have a big year for them, [Steven] Williams being one of them,” he said. “The way they played today, they are capable of putting runs up on the board. The ball does carry a little differently at night time as opposed to daytime here. They’ve got a good guy going on the mound (Tanner Burns) and we’ve got a good guy going on the mound (lefty Connor Thomas, (9-1, 3.28). So it should be a heck of a ballgame.”