#TGW: Back to Front

Cross country is unique as it provides participants extended time alone with their thoughts, something other sports simply don’t allow.

Confidence and a positive mindset can get runners through levels of pain that are inconceivable when not competing, and can lift them up to greater heights and lower times.

Yet time to think can as easily be a double-edged sword that can cut harshly and be detrimental.

Nicole Fegans is running with that positive mindset. It’s something she’ll run with on Friday as she leads Georgia Tech into the ACC Cross Country Championships on the Buford Meredith Cross Country Course, on the campus of Virginia Tech (They’ll start at 11 a.m. The men go off at 10 a.m.).

Being on the right side mentally is refreshing and certainly nicer than where Fegans had been, and traveling the road she took to get to this point.

“I just have a lot more confidence in myself than I have in the past,” said the junior from Douglasville, Ga., who starred at Landmark Christian. “Freshman year, all of it is new and overwhelming. Last year I wasn’t as happy with my season and had troubles with my confidence.”

It took digging deep and coming back from being hurt to get her mind right.

“Last year at the end of the season I ended up fracturing my foot and I think that really woke me up to, ‘Okay, get out of your head,’” she said. “You feel like you’re not running your best, you’re not getting the results you want, but it’s just about taking a step back and realizing you have the opportunity of a lifetime to be running in college, at Georgia Tech, and you’re lucky to have teammates who are there cheering you on.” 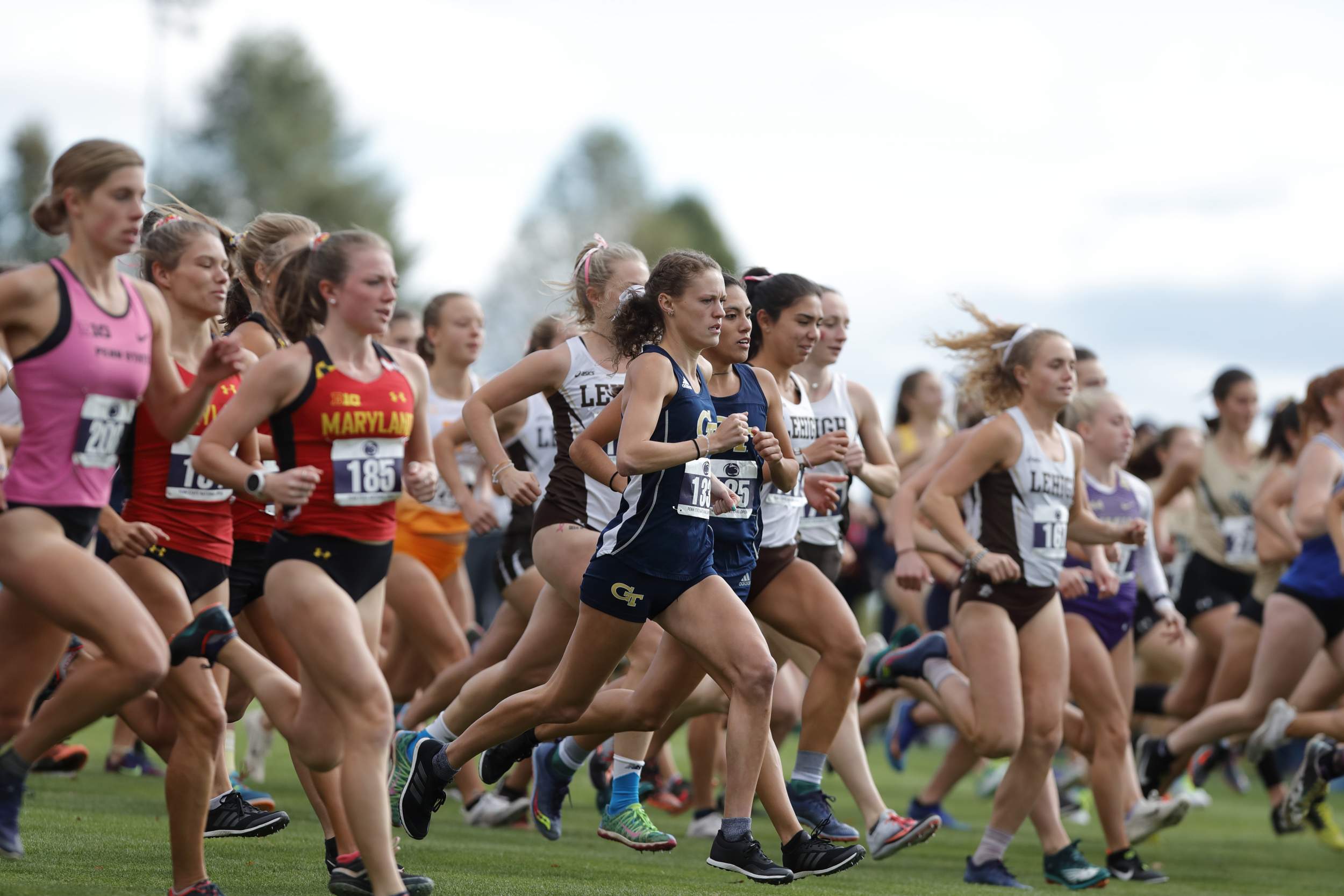 Fegans has taken full advantage of that opportunity this season, as she’s led the Jackets in all three meets, while finishing in the top five overall each time out — first at the Bulldog Invitational, fifth at the Battle in Beantown and second at the Penn State National Open — and has helped the Jackets finish top-five in all three — first in Athens, fifth in Boston, second in Happy Valley.

“Nicole is very talented and is really starting to find herself as a collegiate athlete. She did well her first two years but I think is finding out that she can run with almost anybody in our conference and will put herself out there,” said head coach Alan Drosky. “She was very talented in high school, but you come into college and college running is so high-level. There’s just very talented women all across the country and certainly in the ACC, so it’s stepping into those races and stepping into the competition confident of where you need to be, and I think it’s taken her a little while to kind of figure that out. I think we have a women’s team that is pretty focused and pretty confident in their abilities across the board.”

Confidence is the difference.

“It’s definitely the highest it’s ever been,” she said. “It’s taken a long time to get here but I’m really thankful for it.”

That confidence runs throughout the team, starting with Fegans at the top. Everybody on the roster feels she can be in the top five on any given day and that’s pretty much what has happened. The Jackets have had six different runners finish in their top five — grad. student Kim Hallowes, seniors Mary-Claire Solomon and Ellen Flood, junior Liz Galarza and sophomores Mary Kathryn Knott and Claire Moritz — with Galarza, Solomon and Knott each taking a turn coming in behind Fegans.

“We go back I’d say at least eight, maybe even nine or 10 where any one of those athletes can be in our top five on a given day,” Drosky said. “That’s one of the strengths of our team is that we’ve got great depth. They’re all capable of contributing. So I think that’s a huge positive for us.”

Making that positive even bigger is that junior Hana Herndon has not been one of those runners, and that the group has responded the way it has as Herndon progresses in returning from her injury. 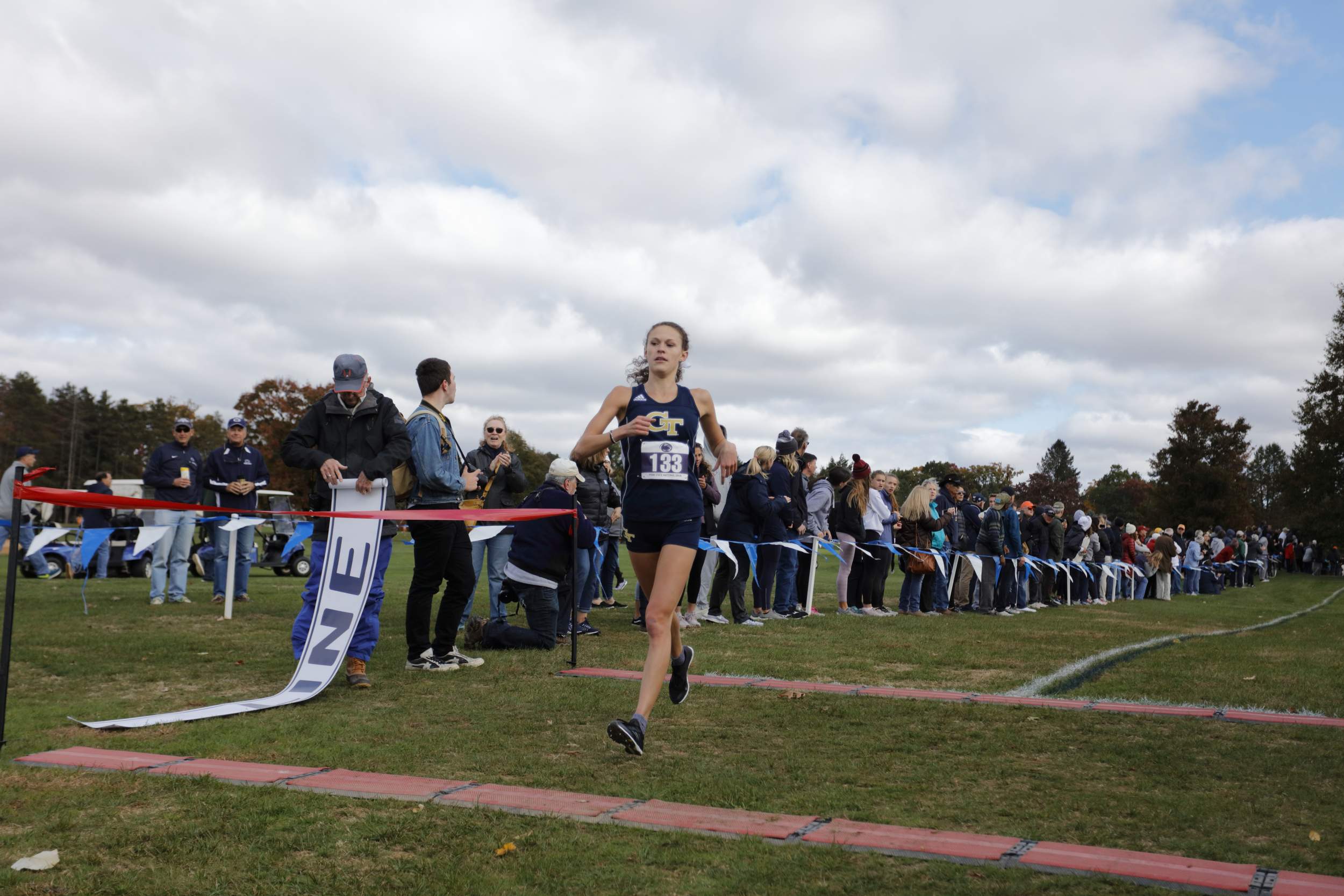 Fegans isn’t surprised about the way the team has stepped up and about how Herndon continues to come back. She points to a positive vibe surrounding the team which she, too, has felt and by which she’s been affected.

“This year I’ve had a mental change and the team has been so helpful and encouraging,” she said. “It’s definitely made me feel a lot more confident knowing I have them cheering me on and that they’re trying just as hard as I am.”

The results are showing, as the Jackets began the season No. 3 in the South Region – its best pre-season ranking in program history – and have since moved up to No. 2. They’re also receiving votes nationally and are on the cusp of cracking the top 30. A good performance Friday would be another big step forward toward the NCAA Championships on Nov. 23 in Terre Haute, Ind., with the NCAA South Regional still to be run on Nov. 15, in Tallahassee.

“We’re trying not to get ahead of ourselves,” Drosky said. “I think all of those things are good but at the end of the day it’s about being focused, having some poise in the competition itself and focusing on executing the race that you need to run and not get too caught up in worrying about where anybody else is, where any other teams are. Just kind of run the race that we’re capable of running and the rest will take care of itself.”

While no one’s looking ahead, they do know where they want to be on the 23rd. That’s at Nationals. It’s a place they hadn’t been in 17 years prior to getting there last season. They are determined to make it a streak.

“Our confidence as a team is higher because we know that we are capable of these things,” Fegans added. “The pressure on the outside, especially when it’s negative, has helped make us want to prove them wrong because no one’s expecting a team from Georgia Tech to come back again. It’s kind of cool, now we’re beating teams we didn’t realize that we could beat. It’s pushed us to want to do better and keep proving people wrong. We are as good as we think we are.”