The college tennis career of Andres Martin is off to a pretty fine start, and it looks like the Georgia Tech freshman needed to get his butt kicked for that to happen.

He’s 6-3 this fall, with wins over three nationally-ranked opponents and a competitive loss to the No. 6 player in the land. So, he’ll be better prepared to play when some – not all – of the Jackets play in the ITA Regional Championships at the University of Florida beginning on Thursday.

Coming from Flowery Branch, Ga., where Martin home schooled through the Georgia Connections Academy while concentrating equally on the sport he wants to make a career, he arrived on The Flats accustomed to great success. His junior career was highly accomplished.

So, he came out of the blocks fast. At the first tournament at Georgia, in late September, he beat Robert Loeb – a fixture in the highly-ranked Bulldogs’ lineup last season — 6-3, 6-2, and felt good about that.

He then tripped, falling 6-4, 6-3 in the quarterfinals to Joshua Goodger of Florida. But that didn’t feel too bad because, well, he’s a freshman and that was the No. 68 player in the country. Plus, Goodger was, “this lefty guy from Florida in the second round, and I was there. It was an even match and all of a sudden he just took control.”

No shame in that. That was a ranked player with a weird lefty style. Next time, he’d be ready for that. So, Martin was feeling a bit like a peacock ready to strut, a young guy in position to move on up.

Then, “The same day I got destroyed 2&1 by a Tulane guy. Going into the match I was pretty cocky,” he recalled of the mid-September match in Athens. “I was like, ‘I should beat this guy.’ And then I got destroyed and I was like, ‘Man, what just happened?’”

He got his butt kicked; that’s what happened.

Tulane’s Hamish Stewart, ranked No. 110 at the time, beat him 6-2, 6-1. It wasn’t close. It was an awakening. These players are better than most of the folks he practiced against while growing up in Flowery Branch, and then for the final two years of high school while he was boarding at the Smith-Stearns Academy in Hilton Head, S.C. 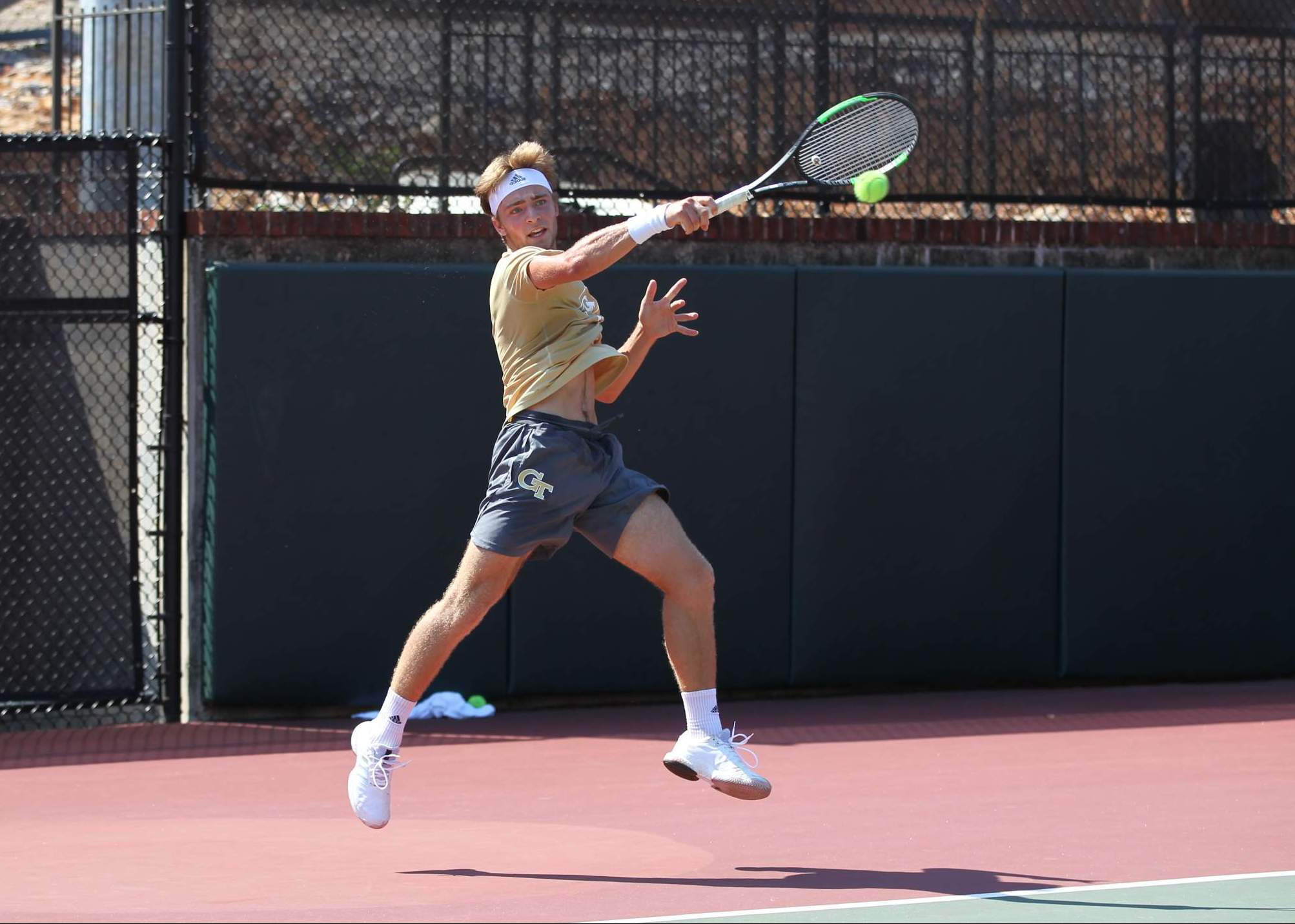 “In college, you start learning quickly that if you’re not ready to play, anybody can step up and beat you,” said head coach Kenny Thorne. “I think that match . . . until you get humbled, it had a deeper impact.”

He beat Evin McDonald of Texas in his final match in Athens, and then a couple weeks ago won three qualifying matches at the ITA All-American Championships in Tulsa to earn a berth in the main draw. That included wins over No. 76 Melios Efstathiou of Wake Forest and No. 58 Bradley Frye of USC.

Martin has been working on being more aggressive, particularly in attacking second serves. And that match against Tulane’s Stewart was an eye opener.

Combine all that, and he got himself on a roll.

“I was definitely humbled. I didn’t play very well, and he didn’t let me do anything,” he said. “It was definitely different. I feel like everyone has a relative level in college tennis. No one is to a point where you can’t beat them, but you can’t sleep on anyone.”

“Everyone’s beatable, but you’ve got to be on your game. I think I was on top of it always in Tulsa. I was more mature in Tulsa.”

Martin found tough sledding in the second round of the ITA All-American Championships in Tulsa, but he represented squarely.

The young man works. And he seems to be growing off that Tulane match.

“The great thing about ‘Dre is he’s willing to go back to work and he’s coachable,” Thorne said. “He’s going to do what it takes to improve. That was a good match for him to get a little taste of college tennis.”

This is a big deal for the Yellow Jackets, who have an especially large freshman class with Keshav Chopra, Marcus McDaniel and Brandon McKinney in addition to Martin.

McKinney is redshirting with roster management in mind.

Martin is quite content with his decision to attend Georgia Tech.

“As a junior (player), I wasn’t that good and then I got pretty good as I began high school. Tech was always an option because I’m from Georgia,” he said. “I really only visited two schools, Tech and UGA. I like the coaches here, and it was a better education.”