There was a sweet start, a bit of a hobbled mess, and a bull rush to the finish.

Georgia Tech’s Jackets won the season opener at NC State, 82-81, in overtime by way of last-second free throws by senior center James Banks III, and then whipped Elon at home.

Tech would finish 17-14 with an 11-9 record in the conference – the most ACC wins for the team in 24 years — and finished in fifth place in the ACC after being predicted No. 12 in the preseason. The Jackets won six games away from home, including five in the ACC, won at Clemson for the first time since 2004, won in Chapel Hill for the first time since 2010, won at NC State and at Wake Forest.

So, what was different over the last two months of the season when the Jackets won nine of their final 12 games – including a victory over No. 5 Louisville — because after those first two games, a wide crater opened before Buzz’s bus.

The Jackets changed their offensive strategy, point guard Jose Alvarado returned to health, several players developed exponentially and all parties banded together so that Tech played hard. Six times the Jackets went to convenience stores after road wins to gather snacks on their coach’s nickel.

Tech lost at Georgia in game three on Nov. 20, as Alvarado’s sprained ankle benched him, and the Jackets fell again at home to Arkansas on a buzzer-beating shot from half court.

Head coach Josh Pastner suggested that Alvarado wasn’t likely to return to action until the turn of the calendar because his ankle was really, really wrenched.

So were the Jackets.

Without Alvarado, Tech beat under-talented Bethune-Cookman and Nebraska squads at home before the bottom fell out. The Yellow Jackets forged ahead with sophomore Michael Devoe and junior Bubba Parham, and even sophomore forward Khalid Moore, handling point guard duties.

At home and still without their point guard, the Jackets were soundly beaten by Syracuse and Ball State with a competitive loss at Kentucky in between.

That’s when Pastner made a change. There would no longer be a mandate that the offense work through the high post, specifically Banks. He wasn’t the passer that his predecessor, Ben Lammers, was, nor was he a jump shooter of same level.

So, the ball started moving more, snapping around the court.

The payoff for these moves was graduated after Pastner tweaked the offensive philosophy before the team‘s trip Honolulu for three games in the Diamondhead Classic. It helped as well that Alvarado returned to action earlier than expected.

“After Ball State . . . we made changes going to Hawaii, and it resulted in us being better. Part of it, we had Alvarado back,” the coach said. “We really took away playing through James at the elbow . . . and we were shooting the ball better. Our offensive rebounding was better. I think some of the adjustments we made were strictly offensive based.”

Tech won twice in Hawaii, losing only to Houston, which was ticketed for the NCAA Tournament before it was called off.

“I thought since Christmas, we made some adjustments, we had some course correction,” Pastner said. “Us losing Jose, our record would have been different if we had Jose. It really hurt us without Alvarado. At the end of the year we were healthy, and we got better.”

And it wasn’t just because Alvarado returned. The Jackets became ferociously competitive as the season wore on, and they bonded to create a greater chemistry.

Plus, several players grew. That’s a simple way of saying that many Jackets got better through maturity and coaching. 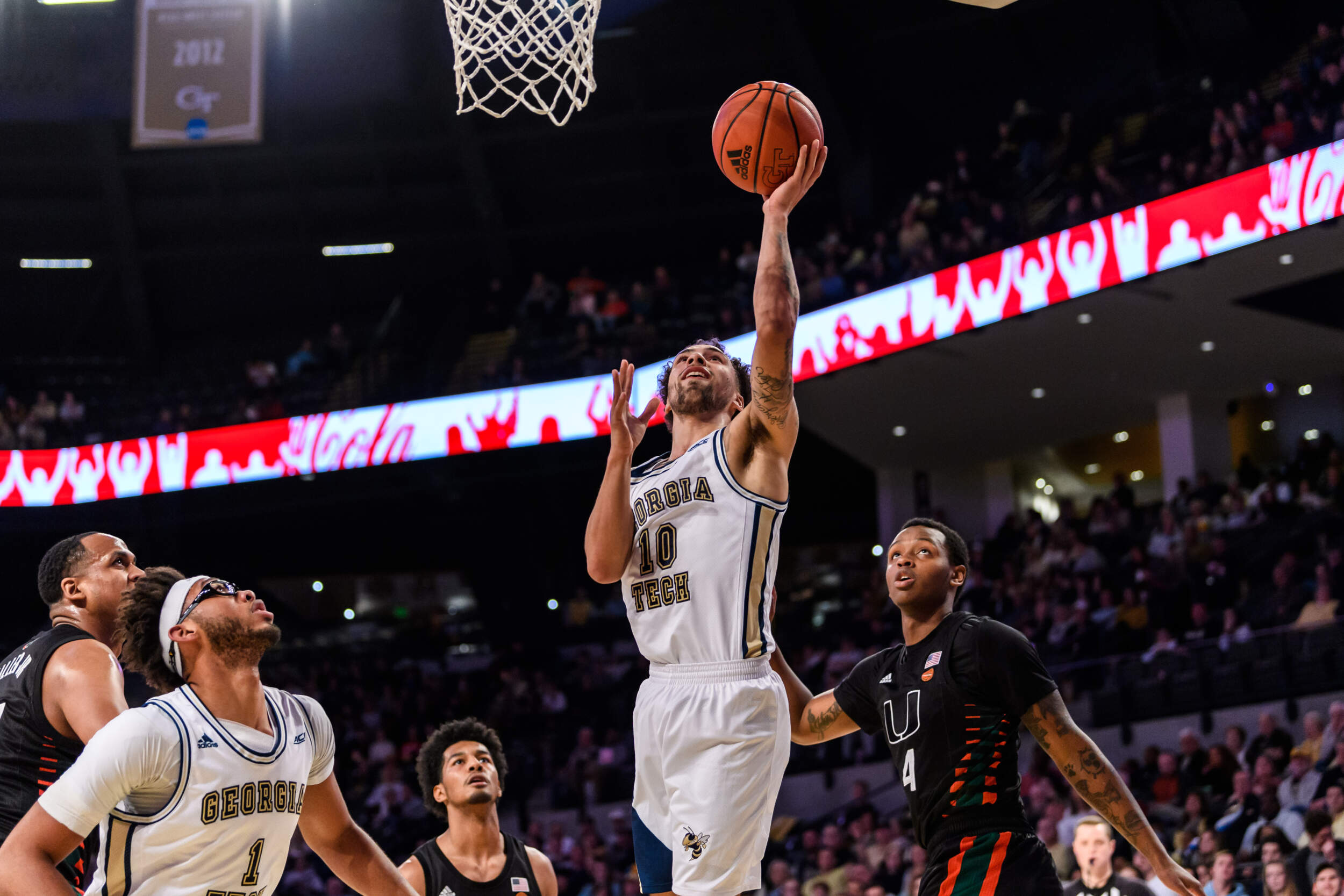 He was barely recruited out of high school, where he played just one year of organized ball. Possessed of significant jumping ability and a knack for getting up and off the floor quickly, Wright is like a human spring who can dunk and dump shots into the goal while within the paint.

When he scored a career-high 33 points at Syracuse on Feb. 22 on 14-of-17 shooting, it was an official birth. He finished sixth in the ACC’s Most Improved Player voting, which is an absurdly low rung on that ladder. He averaged 13.0 points per game, on 53.1 percent shooting and 7.0 rebounds after last season averaging 6.7 points and 3.7 rebounds while shooting 47 percent. He was even better in ACC games.

“A year ago against Syracuse, he couldn’t even get in the game. He wasn’t good enough. Two years ago, I couldn’t put him in the game against North Carolina. He played 20 seconds, and I had to yank him out,” Pastner said. “A year later he scored 33 at Syracuse. He has improved. Moses deserves a ton of credit.”

Wright was not alone in improving, to be sure.

Junior Jordan Usher, who became eligible shortly before Christmas one year after transferring from Southern California, moved immediately into the starting lineup in December. From the jump, he was Tech’s most athletic player. But he played maniacally. He tried to make every steal and dunk every shot.

By late January, he found a rhythm. Before that, Pastner said he was receiving e-mails from fans asking what in the world he was doing playing Usher.

The coach stuck with him in the lineup, and Usher became a steady factor down the stretch.

Pastner runs the macro on this team and trusts the micro to assistants Eric Reveno, Anthony Wilkins and Julian Swartz.

Yet he bumped in on Usher, and talked to him straight up.

“I said, ‘What are you doing? I believed in you based on your motor, and you’re going away from your bread and butter,’” the coach recalled. “You’re trying to be cute, cool and casual and you’re no good at cute.” 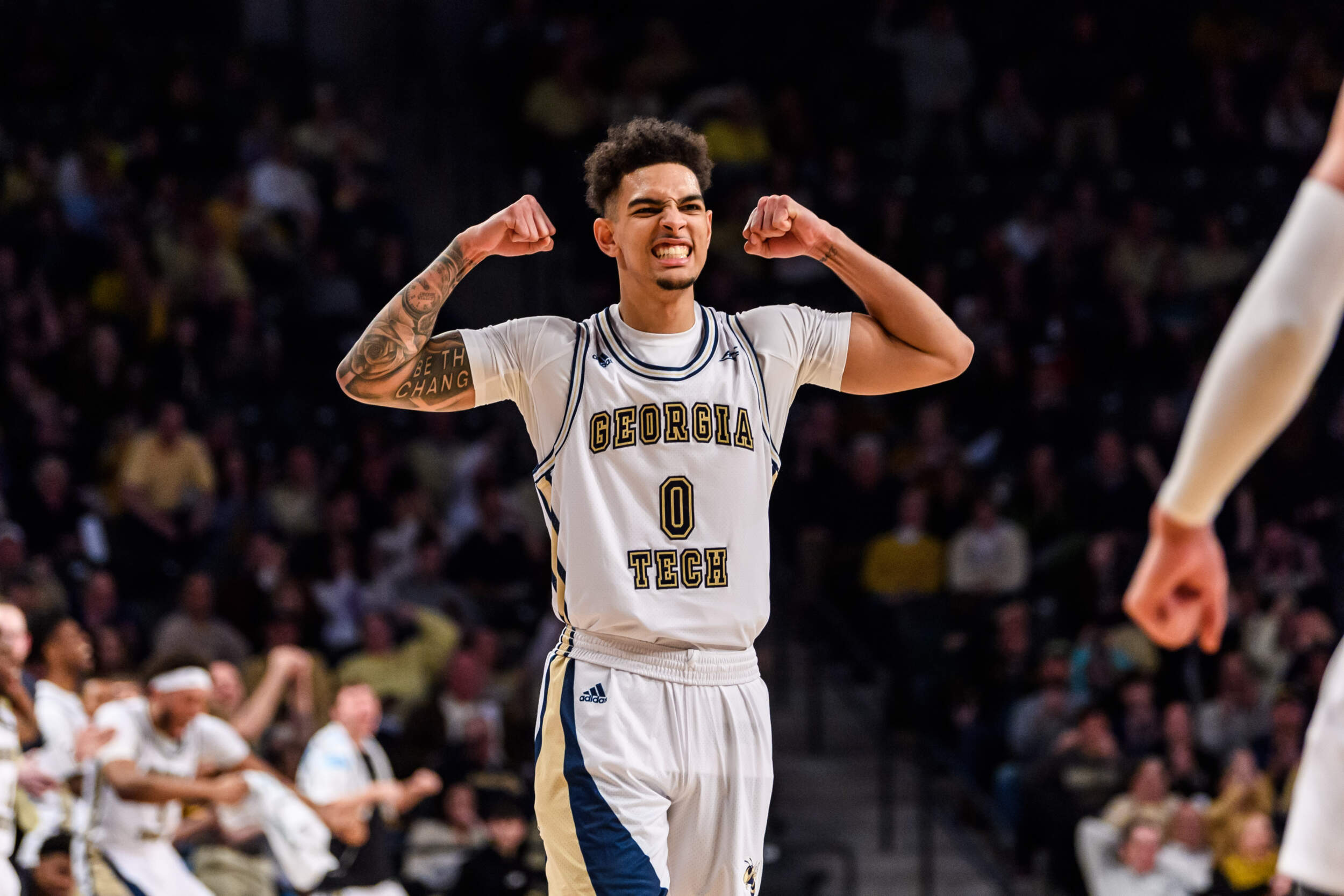 Michael Devoe was one of the most improved players in the ACC, earning honorable mention all-conference honors after ranking in the league’s top 10 in scoring and field goal percentage. (photo by Danny Karnik)

Usher became an efficient passer, somewhat new for him, continued as a fantastic finisher and pesky defender, and Alvarado played like crazy. Evan Cole played seriously effective minutes off the bench, and Khalid Moore became a dependable player on the defensive end of the court.

“We haven’t signed the five-star, elite recruit, so we have to be perfect with five-star development,” Pastner said. “Our guys have gotten better. There’s no denying that, and it’s not just because they’re older. You can absolutely see the difference between one year and the next. That’s really a credit to my staff. The assistants get the guys better and they deserve all the credit.”

Devoe rallied from a midseason foot injury and finished off a stellar season in which he averaged 16.0 points on 47.6 percent shooting. He hit 42.7 percent of his 3-point shots. That’s all good, great if you consider that as a freshman he averaged 9.7, 40.1 and 39.3.

Player development will remain a bedrock in Pastner’s program.

Upon opening the offense with the decision to not force through the high post, the Jackets became considerably more efficient with the ball in their hands. They finished in the top third of multiple offensive categories within the ACC. That’s new.

Banks was voted to the All-ACC defensive team again, and Alvarado led the conference with 2.21 steals per game. He earned third-team All-ACC honors, and Devoe was tabbed honorable mention. 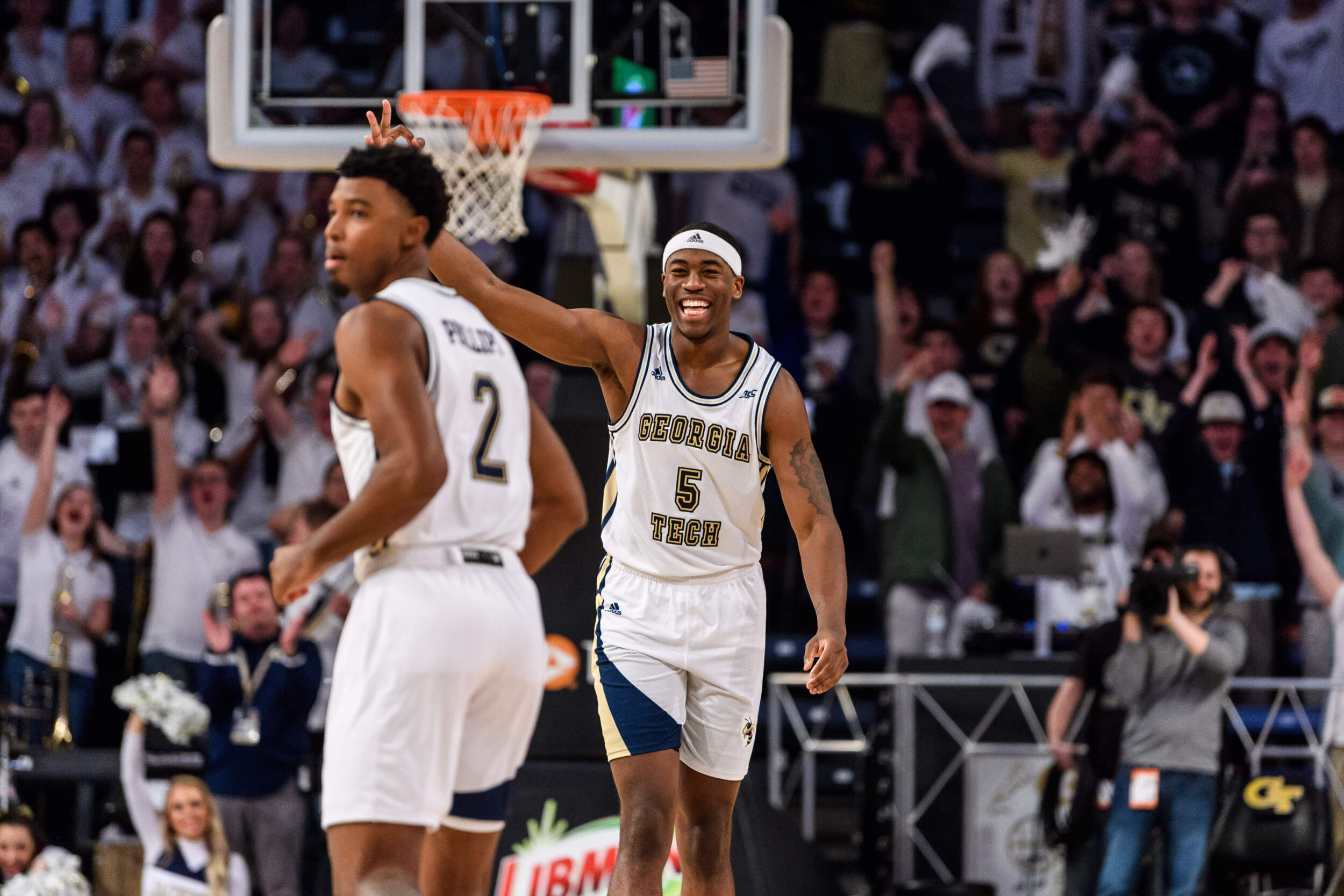 Moses Wright (5) was the only Yellow Jacket to start every game of the 2019-20 season, establishing himself as one of the ACC’s most improved players and a dependable scorer and defender. (photo by Danny Karnik)

Pastner said early in the season that he was tilting more practice time toward offense, and that appeared to pay off.

In the most obvious way, this showed up in the final home game, March 4, against Pittsburgh, when senior Shembari Phillips started on senior day.

“I thought our chemistry was really at a high level; you can’t manufacture it,” Pastner said.

No, a coach can’t. He can schedule bonding events, like bowling or team meals, but a team needs to have players who care. That fit the Jackets.

“Jose is very selfless. I haven’t started seniors in my 11 years as a head coach on senior day. I always start a normal starting lineup ,” Pastner said. “They all came to me and said, ‘we want to start Shembari.’ I said, ‘You guys have earned the right because you’ve played so dang hard. I’ll do it, so who’s not starting?’ They all looked around, and Jose said, ‘Don’t start me, coach.’

“The best thing about our team is we always play hard, even when things weren’t going well. A great example is the last week of the season when they had nothing to play for other than the name across the front of the jersey and each other.”

The Jackets closed the season by defeating the Panthers at home, 73-57, and then winning 65-62 at Clemson on March 6. It’s been 15 years since the Jackets won at Littlejohn Coliseum, and since the Jackets did not participate in the postseason, it meant Tech finished its season with a victory for the first time in 42 years.

Four starters are slated to return. Banks and Phillips will graduate and move on.

Tech has momentum. There is a solid recruiting class signed, although there is transition to be addressed as Cole, Kristian Sjolund – a sophomore who redshirted — and freshman Asanti Price have entered the NCAA transfer portal.

“We wish them nothing but the best, but we’re also going to be involved with some great prospects in the portal to come here,” Pastner said. “I didn’t want anybody to leave. This is college basketball. Right now, I’m planning on all three not coming back. If I fill two spots and somebody says I’m back, I’ll cross that bridge when I cross that bridge.”