When Georgia Tech began 1-3, head coach Paul Johnson calmly sat at the microphone on Tuesday morning, Sept. 25, and talked about filtering out noise as the Yellow Jackets prepared to host Bowling Green.

His message didn’t change on Tuesday morning, Oct. 30. After going 3-1 over its last four games — with all three wins coming in dismantlings, including last Thursday night’s 49-28 road throttling of Coastal Division leader Virginia Tech — the Jackets (4-4, 2-3) prepare to go on the road to take on North Carolina (1-6, 1-4).

While the noise is different, there is still noise to filter out. This week, the noise concerned the quarterback position and who should start: TaQuon Marshall or Tobias Oliver? Did Oliver topple Marshall to earn the starting spot following his brilliant game at Virginia Tech?

It had all the potential makings of a major headline grabber.

In less than 20 minutes, the controversy was rendered a non-troversy.

“Tobias played a really good game against Virginia Tech,” Johnson said. “[But] some people have very short memories. TaQuon played a really good game against Louisville. TaQuon was pretty good against Bowling Green. He’s been pretty good in a lot of games. I base it off of what we see in practice every day. I base it off of experience. Are they both very capable? Absolutely. I like both those guys. I wish we had the same kind of depth at every position that we have there. It would be a good problem to have.

“Now, having said that, when Tobias has gone in he’s done some really, really good things. So he deserves a chance to play, too,” he continued. “So at some point, they’re both going to play. But I’m not going to take a senior captain on the team, who’s a starter, and sit him down because Tobias played really great against Virginia Tech.”

For his part, Johnson preferred a ‘Vive la difference!’ with his two quality QBs.

“They’re similar and there are some things that each one can do a little better than the other one. They both have their strengths. They both can do some things that are positive ,” he said. “If you’d asked us before the season started, ‘Who are your three or four best players on the team?’ I don’t think anybody would have left TaQuon out, right? Tobias has pushed himself up to the point where he’s played really well, too. So it’s a good problem to have. You have two good players.”

For their parts, the Marshall and Oliver have already shut out that noise.

“Tobias did an awesome job. I was super proud of him,” said Marshall of Oliver’s performance in last Thursday’s win at Virginia Tech. “I just tried to congratulate him every time he came off the field. There were some things that I saw on the side that maybe I could give him a few pointers on, to kind of help him throughout the game. I would let him know. But other than that, just talk about what he was seeing on the field and kept him encouraged and told him to keep balling out because he was doing an awesome job.”

Oliver confirmed how ultra-supportive Marshall has been.

“I couldn’t ask for a better older quarterback,” he said. “TaQuon, if he’s on the field, if he’s not on the field, he’s the same guy. He’s on the sideline, he’s tuned into the game 100 percent. He’s telling me what I need to do, he’s congratulating me when I do well. He’s a great guy. [At VT,] he was just telling me to be patient with my runs. A couple of times I got too fast and outran my blockers. He was just telling me to be patient.

“I want TaQuon to go out and do his thing just like he has been but I feel really good about getting into the game,” he added. “TaQuon and I were talking about this the other day. He was like, ‘It’s crazy how coming into this season you never knew that you were even touch the field. Now you’ve started a game, you have dang near better stats than me.’ It’s just crazy.”

Johnson credits Oliver for raising his game to the point where he can be considered competition for the starting job, and is comfortable with Marshall’s experience in the role. His answer for Saturday will be what it’s been all season.

“I don’t know that anything’s changed,” he said. “They’ve both played in every game they were available to play. So we’ll just play the game and see what happens. We’ll go practice, get a plan then go play the game. We don’t change a whole lot of what we’re going to do depending who’s at quarterback.”

There’s no need to change a whole lot, especially with the way the offensive line is playing. They paved the way for the Jackets to manhandle the Hokies, rambling for 465 rushing yards (6.0 yards per attempt).

“It was fun and very cold. I’m not usually that cold, but it was fun. We came out with the [W],” said offensive lineman Jahaziel Lee of the Blacksburg experience. “At first it was tit-for-tat, but we realized somebody’s got to break away. Somebody’s gotta step up and make something happen, make a play, make a block. We knew if we continued to do what we had to do and everybody controlled what they needed to control, then we weren’t going to be able to be stopped.”

Lee feels the unit has never been more cohesive and believes their success on gameday is a culmination of their work during the week’s other six days.

“From week to week, we’re just trying to get better and as the season has progressed, we just really just are bringing it,” he said. “We’re coming in on Sundays, when we’re off, working out, keeping our strength up. That’s a big help with us being able to stay healthy and be explosive from week to week.”

The execution up front led to big nights for Georgia Tech’s ball-handlers against Virginia Tech, and big smiles from them thinking about it this week. 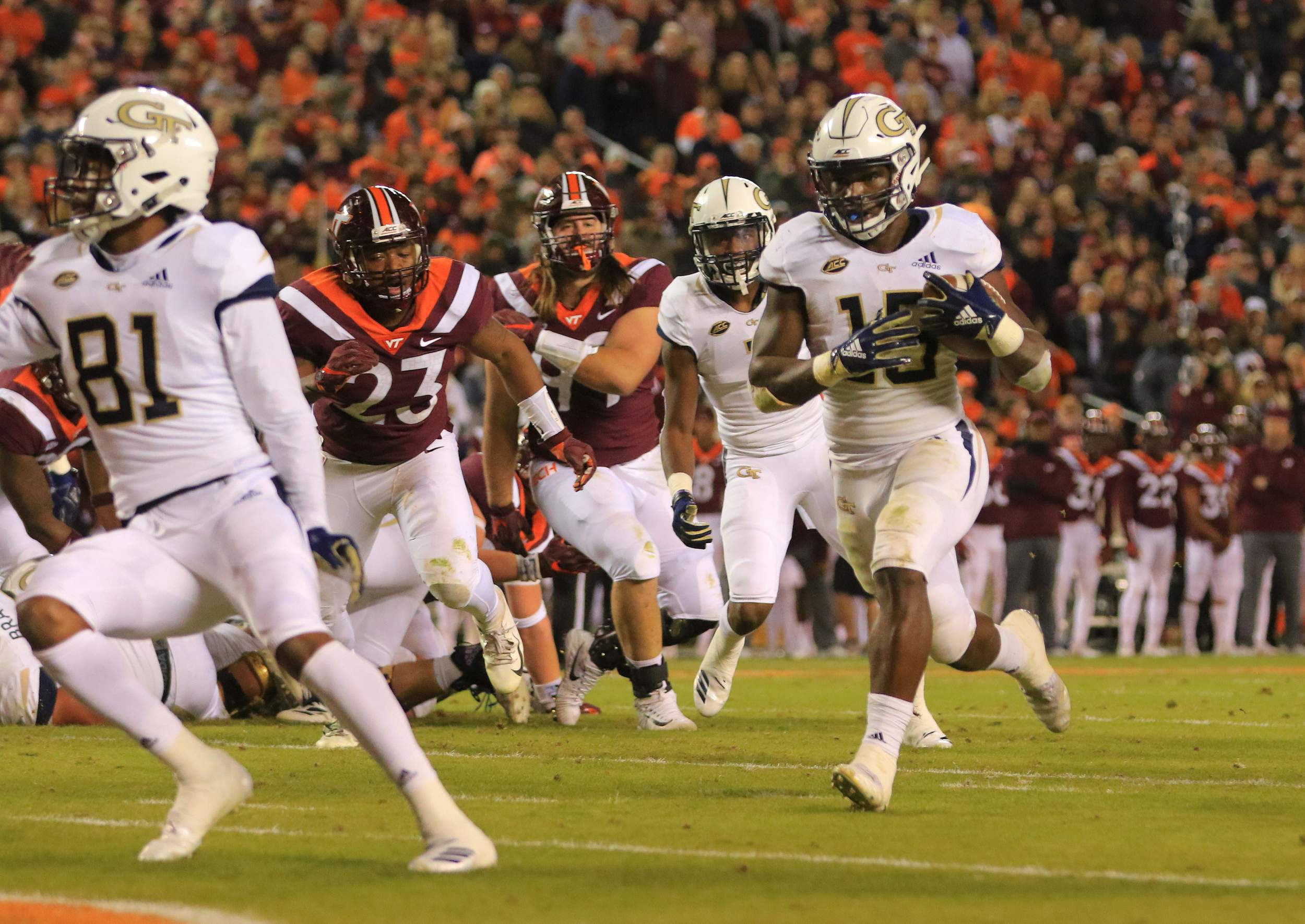 “The offensive line was aggressive. Everybody was aggressive,” said B-back Jerry Howard (above), who ran for 76 yards on 12 carries with a touchdown vs. VT. “I think we had like 98 defenders on the ground. I was like, ‘Wow!’”

“It was great. The offensive line dominated the line of scrimmage. They got push every play,” said Oliver, who ran for 215 yaards on 40 attempts with three scores. “A lot of people were saying, ‘Oh, they only had one pass attempt.’ We also had a lot of third-and-ones and second-and-ones. We didn’t really have a lot of pass scenarios because the offensive line just dominated.”

Knocking down defenders — especially the linebackers — will be a priority for the Jackets this Saturday.

“They’re experienced up front when they have all their guys. I think that they’ve got a lot of good athletes that can run, they’ve had a lot of success putting pressure on quarterbacks when you throw the ball,” said Johnson. “We’ve had a hard time getting on their linebackers the last couple of years when we played. They’ve kept them pretty clean.”

Marshall is determined to end the two-game losing streak at Chapel Hill. He sees an opportunity to get a third-straight win on the road — another noisy subject they’ve put to bed — and get their final third of the season off on the right foot.

“It’s a great opportunity for us to get to five and get closer to being bowl-eligible,” he said. “So it’s a really big game for us and we’re really focused on this one and this one only. So our goal this week is to go 1-0 and everybody will be locked in and ready to go on Saturday.”

“Certainly, the last four games are going to be tough games,” said Johnson. “But, as I’ve said all along, outside of Clemson, everybody in our league is pretty close.

Johnson’s even filtered out the noise of possible trick plays being pulled out by North Carolina head coach Larry Fedora.