THE FLATS – Georgia Tech junior defensive back Juanyeh Thomas (Niceville, Fla./Niceville) is one of 50 candidates on the official watch list for the 2020 Paul Hornung Award, presented by Texas Roadhouse. In its 11th season, the Hornung Award is given to college football’s most versatile player by the Louisville Athletic Commission. 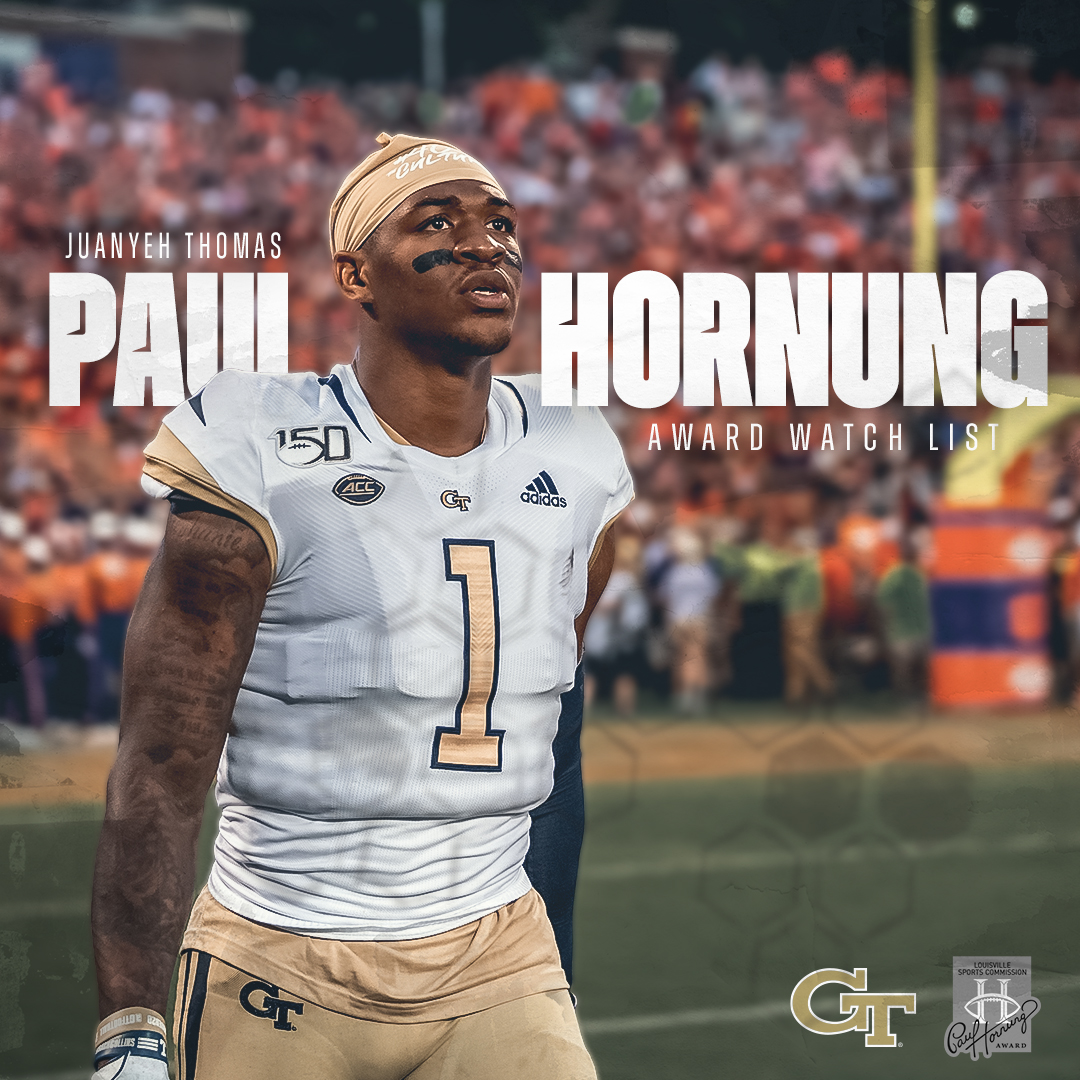 As a sophomore last season, Thomas ranked fourth on the team with 60 tackles, to go along with 2.5 tackles for loss, an interception and a forced fumble from his safety position. He has been tabbed a preseason all-Atlantic Coast Conference selection as a defensive back by Athlon and Phil Steele this summer.

As a kick returner, Thomas was a freshman all-American in 2018 after he set five school records in the role during his first season on The Flats. Most notably, he returned two kickoffs for touchdowns (77 yards vs. Virginia and 100 yards at Georgia), becoming the first freshman in school history and only the third Yellow Jacket overall to score two touchdowns on kickoff returns in a single season. He was limited to just seven kickoff returns last season due to a minor injury but is expected to be prominent in the role again as a junior.

The winner of the 2020 Hornung Award will be honored at the annual Paul Hornung Award dinner in March 2021 at the Galt House Hotel in Louisville.

Thomas and the Yellow Jackets are scheduled to open the 2020 season on Thursday, Sept. 3 with a primetime matchup versus defending national finalist Clemson at Bobby Dodd Stadium. 2020 Georgia Tech football season tickets are on sale now. The Yellow Jackets’ seven-game home schedule is one of the best in program history, featuring matchups at Bobby Dodd Stadium versus Clemson, Miami, Virginia and UCF, as well as the inaugural “Mayhem at MBS” showdown against Notre Dame at Mercedes-Benz Stadium on Nov. 14. Season tickets start at just $229 and include the Mayhem at MBS contest versus Notre Dame. For more information and to purchase tickets online, visit ramblinwreck.com/footballtickets.