THE FLATS – Three Georgia Tech football student-athletes – offensive tackle Zach Quinney (Savannah, Ga./Savannah Christian Prep), defensive end Jordan Domineck (Lakeland, Fla./George Jenkins) and quarterback Jeff Sims (Jacksonville, Fla./Sandalwood) – have all earned weekly awards from the Atlantic Coast Conference in honor of their performances in Tech’s 56-33 win over Duke on Saturday. Quinney was named the ACC co-Offensive Lineman of the Week, Domineck was recognized as the conference’s Defensive Lineman of the Week and Sims was tabbed as the league’s Rookie of the Week. 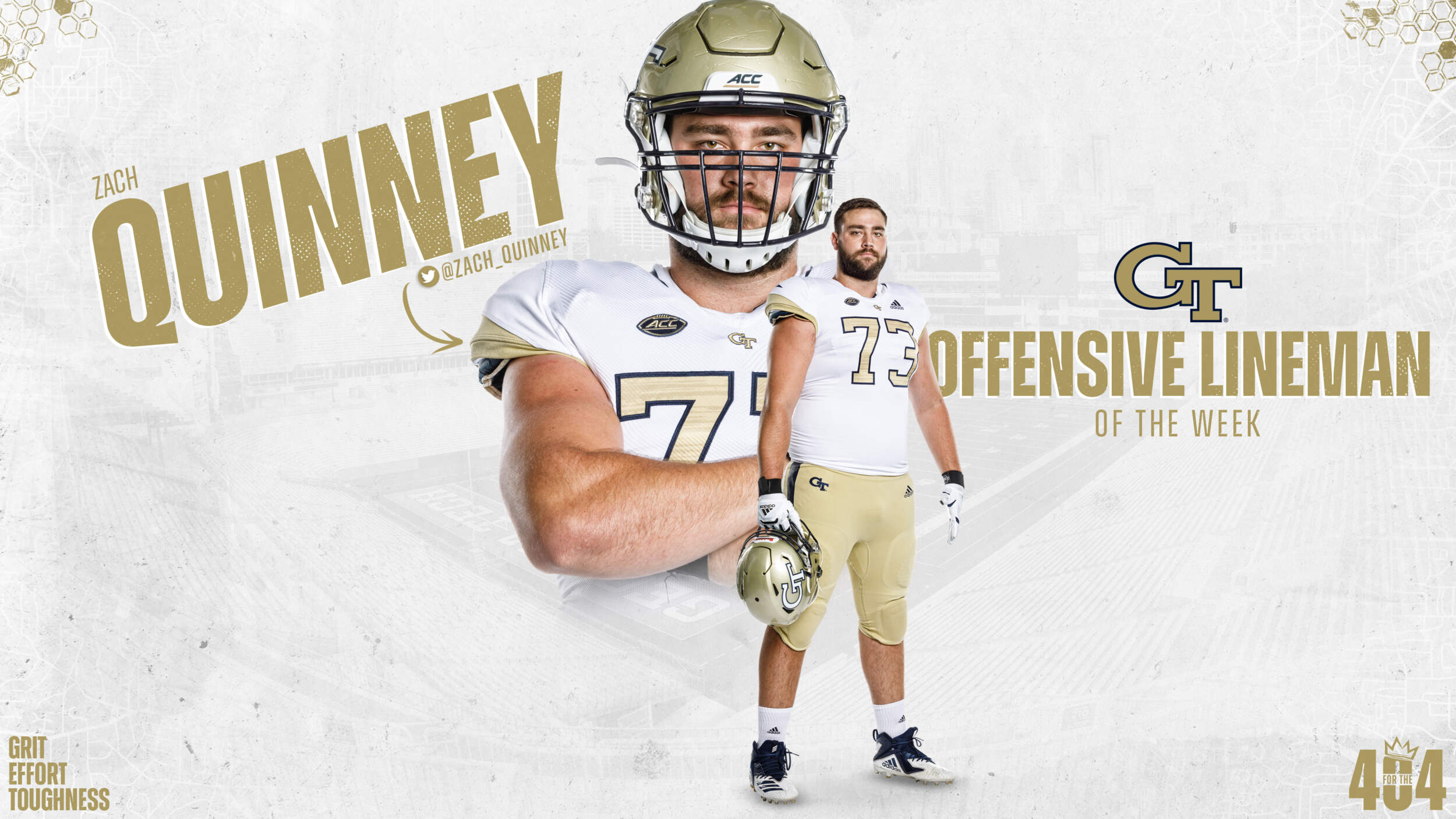 Quinney added to his all-ACC resume this season by helping pave the way for Georgia Tech to rush for 377 yards – the third-highest rushing total by a Power Five conference team this season – in the win over Duke. Behind Quinney and the offensive front, the Yellow Jackets posted their highest rushing- and total-yardage (523 yds.) outputs since Nov. 3, 2018 versus North Carolina and had three rushers with at least 90 yards – Sims (108), RB Jordan Mason (105) and RB Jahmyr Gibbs (91). Making Quinney’s performance even more impressive was the fact that he was primarily matched up with Duke’s Victor Dimiukeje, an all-ACC selection that came into the game with 7.5 sacks on the season, and limited him to four tackles (one solo), no sacks, no tackles for loss and no quarterback hurries. The ACC weekly honor is the first of the junior left tackle’s career. 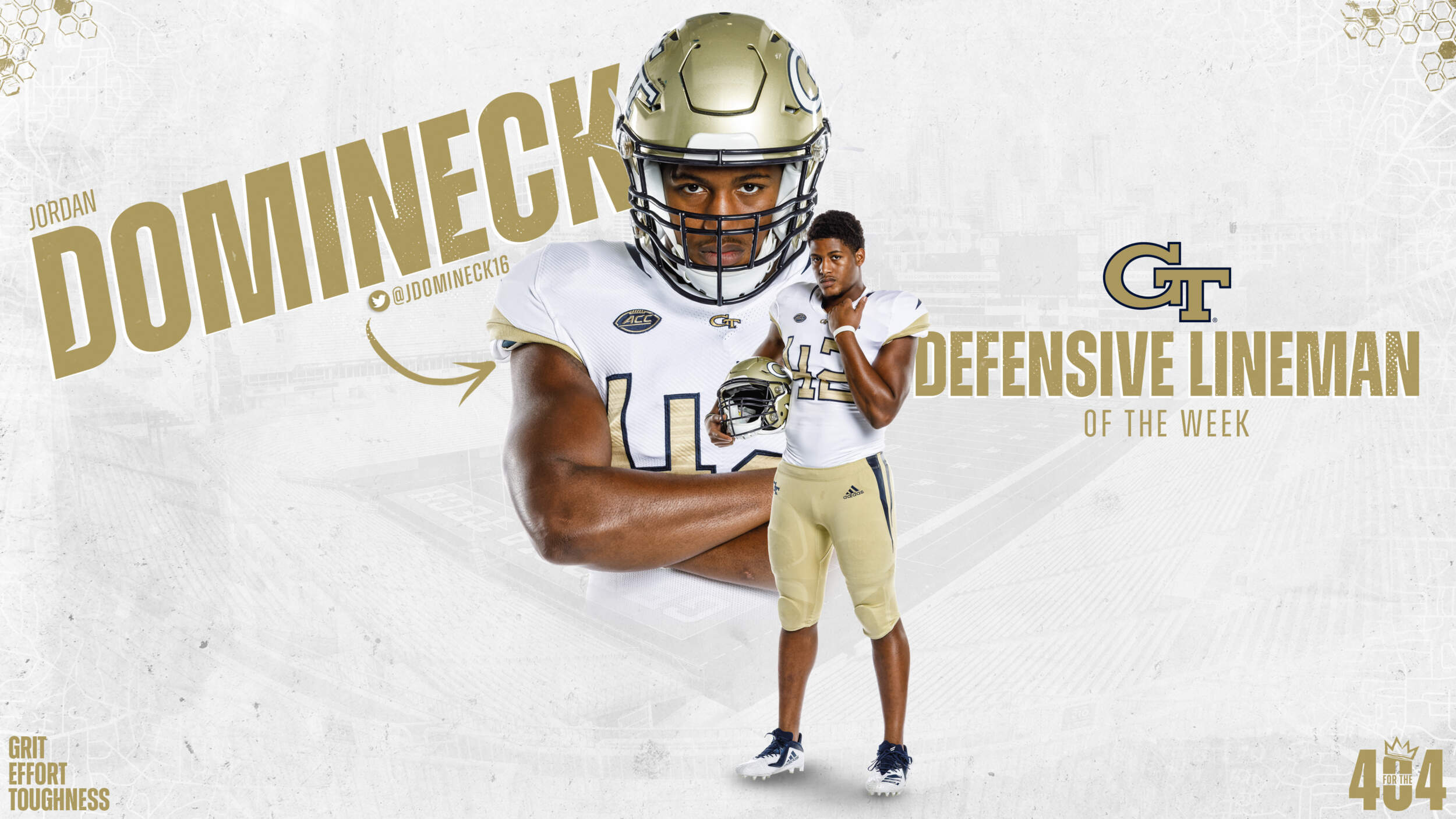 Domineck was named ACC Defensive Lineman of the Week for the second time in his career after a historic performance against Duke, which was highlighted by a pivotal strip sack and fumble recovery for a touchdown. Domineck finished the evening with two sacks and 2.5 tackles for loss to go along with the forced fumble on his sack of Duke quarterback Chase Brice and subsequent fumble recovery in the end zone that gave the Yellow Jackets the lead for good at 28-23 late in the first half. Domineck is the first Power Five player to record at least two sacks, 2.5 TFL, a forced fumble and a fumble recovery for a touchdown in a single game since NC State’s Brian Slay did it against Liberty on Sept. 3, 2011. Domineck is the first Power Five player to accomplish the rare feat against an NCAA Division I FBS opponent since UCLA’s Akeem Ayers versus Arizona State on Nov. 21, 2009. The sophomore was also named ACC Defensive Lineman of the Week following his performance in a 28-26 win over NC State on Nov. 21 of last season. 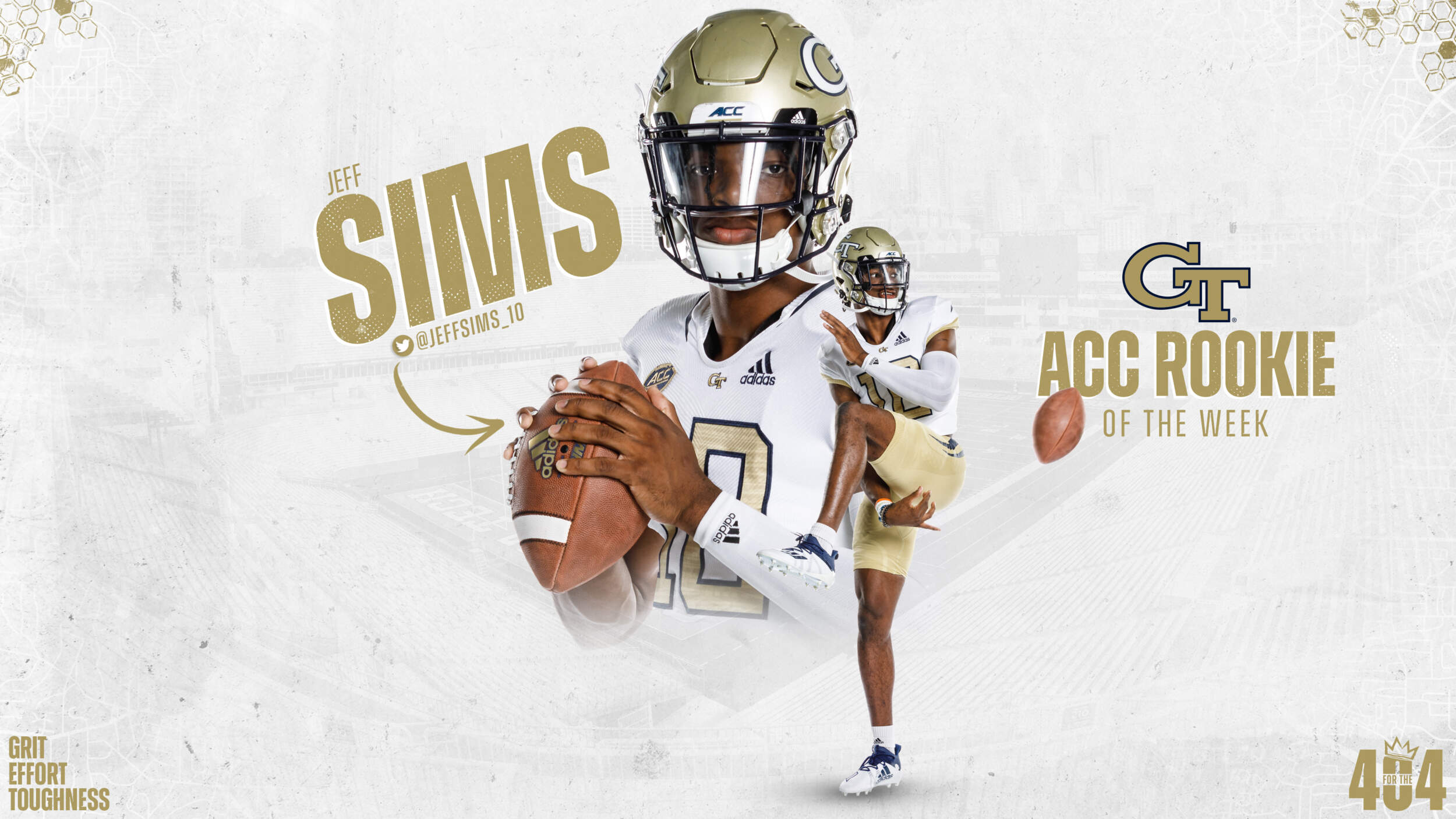 Sims was named ACC Rookie of the Week for the third time this season after the true freshman set career highs for rushing yards (108) and touchdown passes (3) in the win over Duke. In the process, he became only the ninth FBS player and first freshman (true or redshirt) to rush for 100 yards and throw for at least three touchdowns in a single game this season. He was especially impressive in the second half, as 107 of his 108 rushing yards and two of his three touchdown passes came after halftime to help turn a slim 28-26 advantage at the break into a decisive 23-point triumph. His 107 second-half rushing yards came on just eight carries (13.4 avg.). Sims was also named ACC Rookie of the Week following Georgia Tech’s wins over Florida State (Sept. 12) and Louisville (Oct. 9). He is only the second Yellow Jacket to ever be named ACC Rookie of the Week as many as three times, joining College Football Hall of Famer Calvin Johnson, who earned the honor four times as a true freshman in 2004.

Quinney, Domineck, Sims and the Yellow Jackets (3-5, 3-4 ACC) return to action this Saturday when they visit NC State for a 4 p.m. contest (TV: ACC Network).

Following Saturday’s game at NC State, Georgia Tech has a quick turnaround for its 2020 home finale versus Pitt, which will be played on Thursday, Dec. 10 at Bobby Dodd Stadium. An extremely limited number of tickets for the Senior Day game against Pitt are available and can be purchased online by clicking HERE. All tickets and Georgia Tech-issued parking passes that were distributed for the original date of the GT-Pitt game (Nov. 14) will be honored for the Yellow Jackets’ Dec. 10 game vs. the Panthers.