THE FLATS – Georgia Tech has agreed to future home-and-home football series with Alabama and Georgia State, director of athletics Todd Stansbury announced on Wednesday. The Yellow Jackets will renew their rivalry with Alabama on Aug. 31, 2030 in Atlanta and Aug. 30, 2031 in Tuscaloosa, Ala. The Jackets will face nearby Georgia State for the first time on Aug. 31, 2024 at Bobby Dodd Stadium before making the short trip to Georgia State Stadium on Sept. 19, 2026.

“We’re excited to announce the additions of Alabama and Georgia State to our future football schedules,” Stansbury said. “In addition to being one of the nation’s top programs, Alabama is one of Georgia Tech’s oldest and most frequently played rivals, so we are very proud to renew the series for the first time in nearly half a century and allow new generations of fans to enjoy the excitement of the rivalry.

“On the other hand, Georgia State is an opponent that we have never faced in football, despite the close proximity of our campuses and the relationship that we share as members of the University System of Georgia. It will be a lot of fun to square off in a neighborhood matchup and to give our fans another opportunity to come out and see the Yellow Jackets play right here in Atlanta.”

Georgia Tech and Alabama have played 52 times in a rivalry that dates back to 1902. With the exception of a four-year break during World War II (1943-46), the Yellow Jackets and Crimson Tide squared off annually from 1922-63 as members of the Southern Conference (1922-32) and Southeastern Conference (1933-63). The rivalry continued for one season after Georgia Tech withdrew from the SEC in 1964, then was renewed again with games in six-straight seasons from 1979-84. Georgia Tech defeated No. 19-ranked Alabama, 16-6, in the last meeting between the two programs on Sept. 15, 1984 at Grant Field.

Georgia Tech head coach Geoff Collins was Alabama’s director of player personnel in 2007, which was the first season under current Crimson Tide head coach Nick Saban. Collins played an integral role in putting together Alabama’s recruiting class of 2008, which is widely regarded as one of the best recruiting classes in college football history and included Mark Ingram, who went on to become the first Heisman Trophy winner in Alabama history in 2009, and current Atlanta Falcons star Julio Jones. 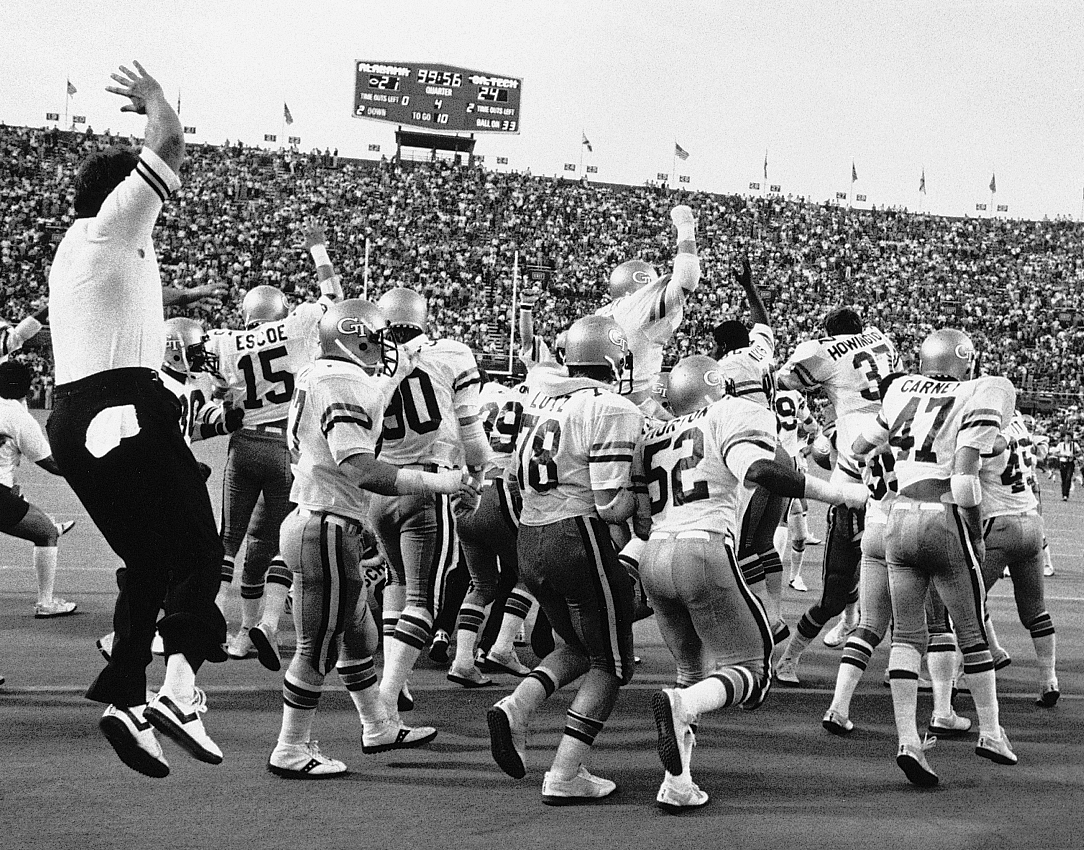 Georgia Tech has never squared off on the gridiron with Georgia State, which began its football program in 2010 and moved to the NCAA Division I FBS level in 2013. GSU’s inaugural coach was legendary Georgia Tech All-American and head coach Bill Curry, who coached the Panthers from 2010-12. GSU plays its home games at Georgia State Stadium, which was built as Centennial Olympic Stadium for the 1996 Summer Olympics and was known as Turner Field when the Atlanta Braves called the stadium home from 1997-2016. Georgia Tech’s Midtown Atlanta campus and Georgia State’s Downtown Atlanta campus are separated by less than two miles.

“These are two great home-and-home series for Georgia Tech football,” Collins said. “Obviously, Alabama is one of the most recognized and successful programs in college football. It’s a program that I have a firsthand knowledge of, having spent a year with Coach Saban helping lay the foundation for the great success that they have had under his leadership. It will be exciting for our players to be able to play the Crimson Tide right here in Atlanta and over in Tuscaloosa.

“It will also be exciting to play Georgia State for the first time. The proximity of our campuses makes for a natural matchup and it will be great for our players and fans to have the chance to play another game right here in Atlanta.”

Georgia Tech 2020 season tickets went on sale Wednesday. The Yellow Jackets’ seven-game home schedule is one of the best in program history, featuring matchups at Bobby Dodd Stadium versus Clemson, Miami, Virginia and UCF, as well as the inaugural “Mayhem at MBS” showdown against Notre Dame at Mercedes-Benz Stadium on Nov. 14. Season tickets start at just $229 and include the Mayhem at MBS contest versus Notre Dame. For more information and to purchase tickets online, visit ramblinwreck.com/footballtickets.