THE FLATS. – The Georgia Tech swimming & diving program inked 13 high-caliber student-athletes to the 2021 fall signing class and one to the 2021 spring signing class throughout the past week. The group includes four top-100 ranked recruits according to collegeswimming.com.

Among the four top-100 recruits on the men’s side are No. 17 ranked Mert Kilavuz & No. 62 Berke Saka, with the women signing No. 39 Defne Taçyildiz & No. 80 Zora Ripkova. The Jackets trotted the globe for the 2021 fall signing class as six of the 14 signees are international students. Notably the Turkey-GT pipeline that began with last year’s signee Batur ÜNLÜ, saw three Turkish nationals added to the Tech roster.

“I am so excited to welcome the class of 2021 to the Georgia Tech swimming and diving family,” said Toni M. and Richard L. Bergmark Swimming and Diving Head Coach Courtney Shealy Hart. “I am grateful to our coaching staff for their persistent work in recruiting these remarkably talented men and women! We recruited a diverse class from the state of Georgia, across the United States and from around the world.  We look forward to working with them to reach all of their goals both in and out of the pool in order to develop champions who will change the world.” 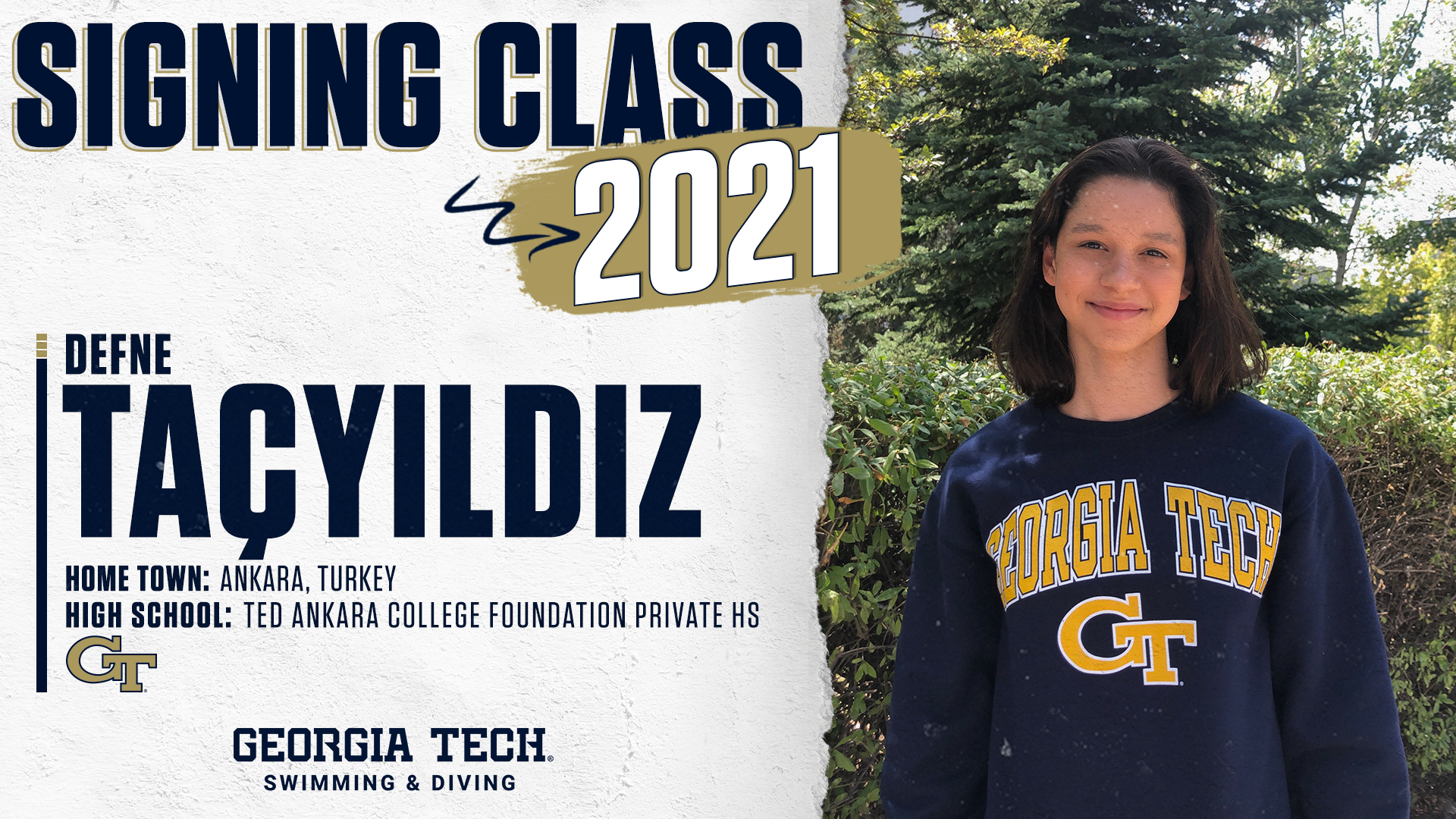 Defne comes to Tech from Ankara, Turkey. The FLY/IM swimmer ranks No. 39 overall women’s recruit in the latest collegeswimming.com rankings. Taçyildiz has been coached by Gjon Shyti throughout her four years at the high school level. She placed fifth at European Juniors in 2019 in the 200 Fly (2:12.09), seventh at World Juniors in the same event that year (2:12.72) and earned an Olympic B time in the 200m fly. All while setting multiple national age records. At the 2020 Turkish Spring Nationals in March, Tacyildiz won national titles in the 100 Fly (1:01.71) and 200 Fly (2:10.95), earning personal bests in both events. 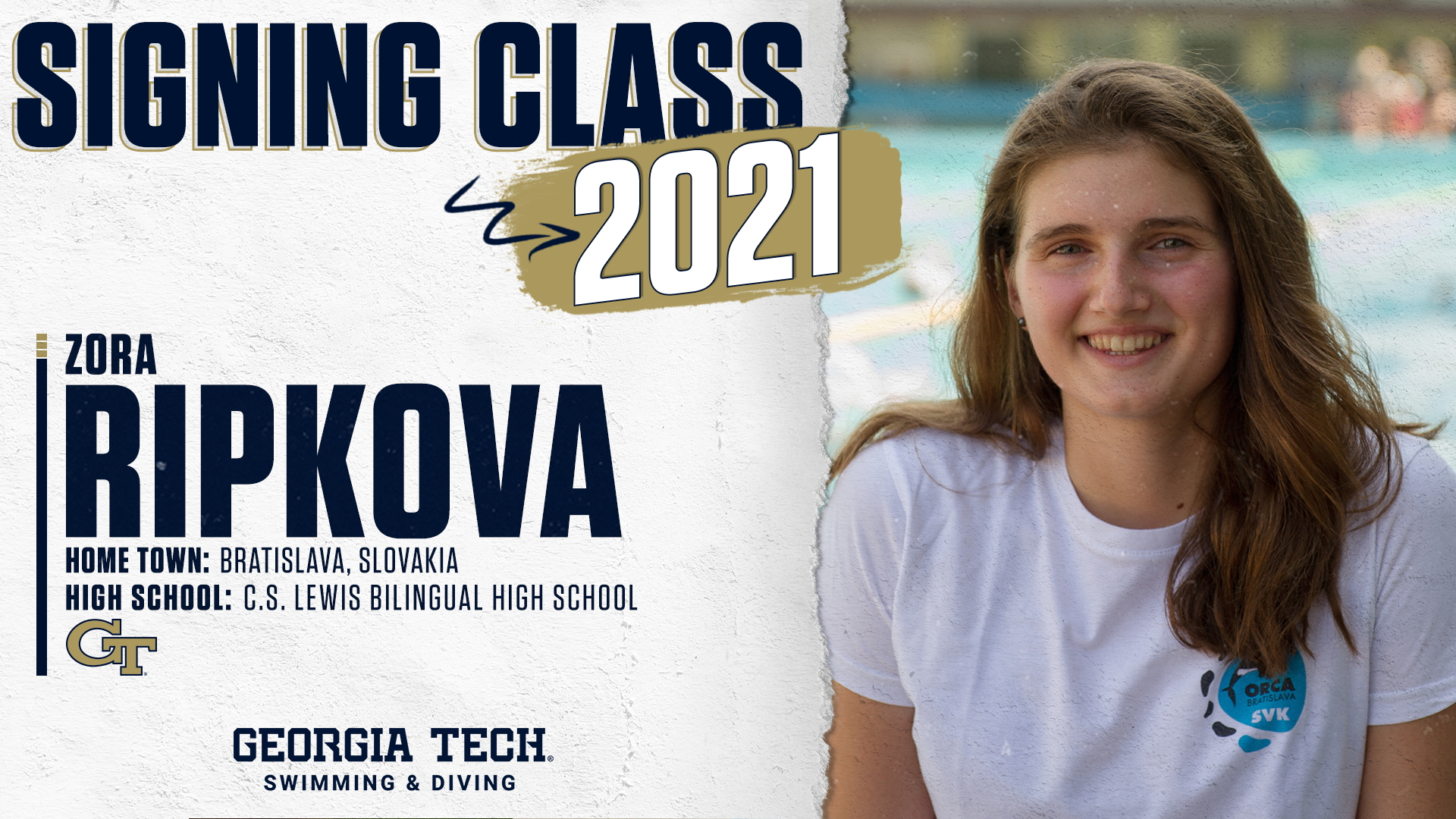 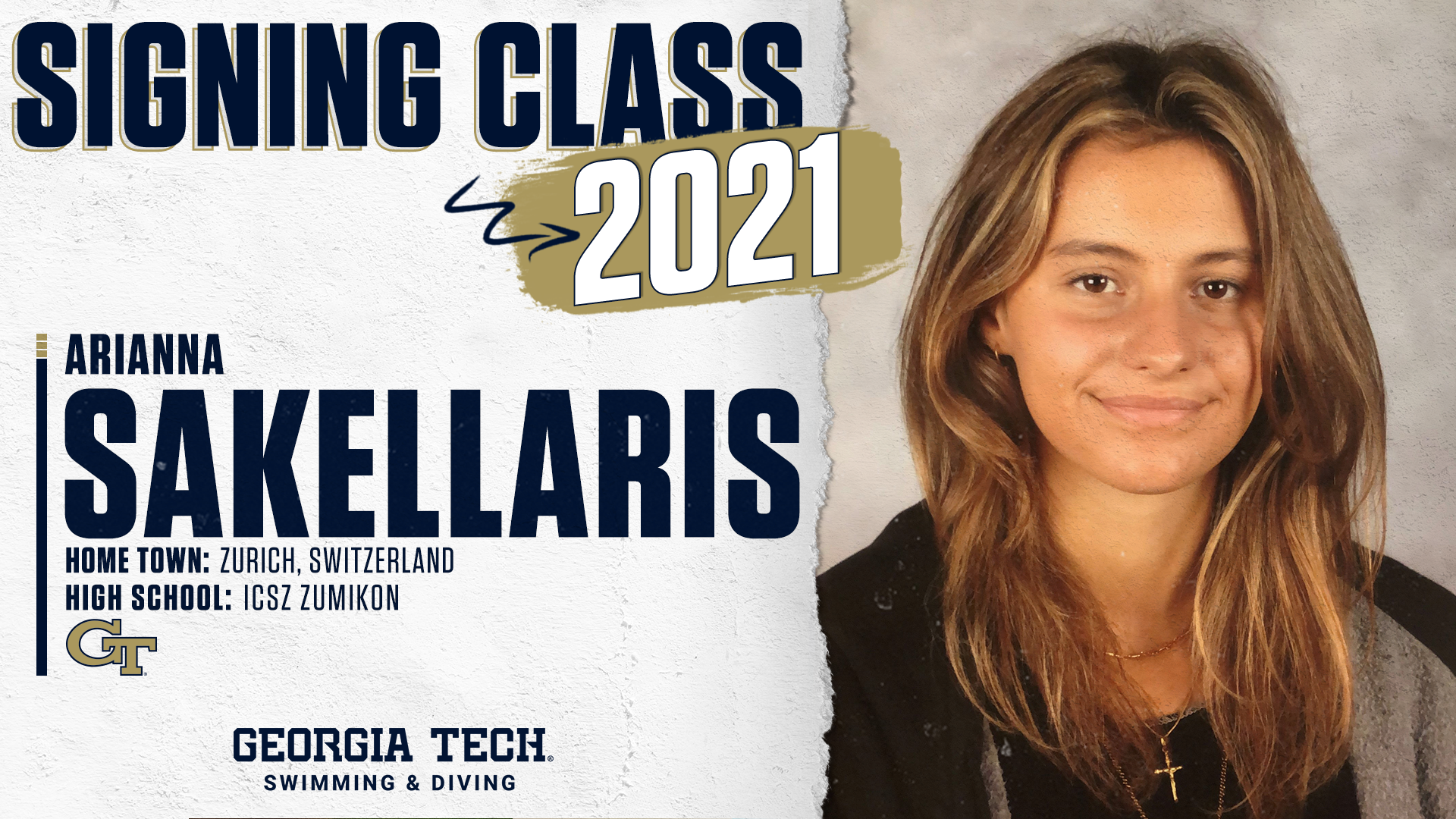 Arianna will join the Jackets in Spring 2021, hailing from Zurich, Switzerland. She attended ICSZ Zumikon in Zurich and specializes as a 200, 400 & 800 Free swimmer. In 2018 she helped set the Swiss national record in the 4×100 Free Relay at the North Sea Meet in Kristiansand, Norway, swimming for SC Uster Wallisellen. She was also a participant at the European Shortcourse Championships in Glasgow in 2019. 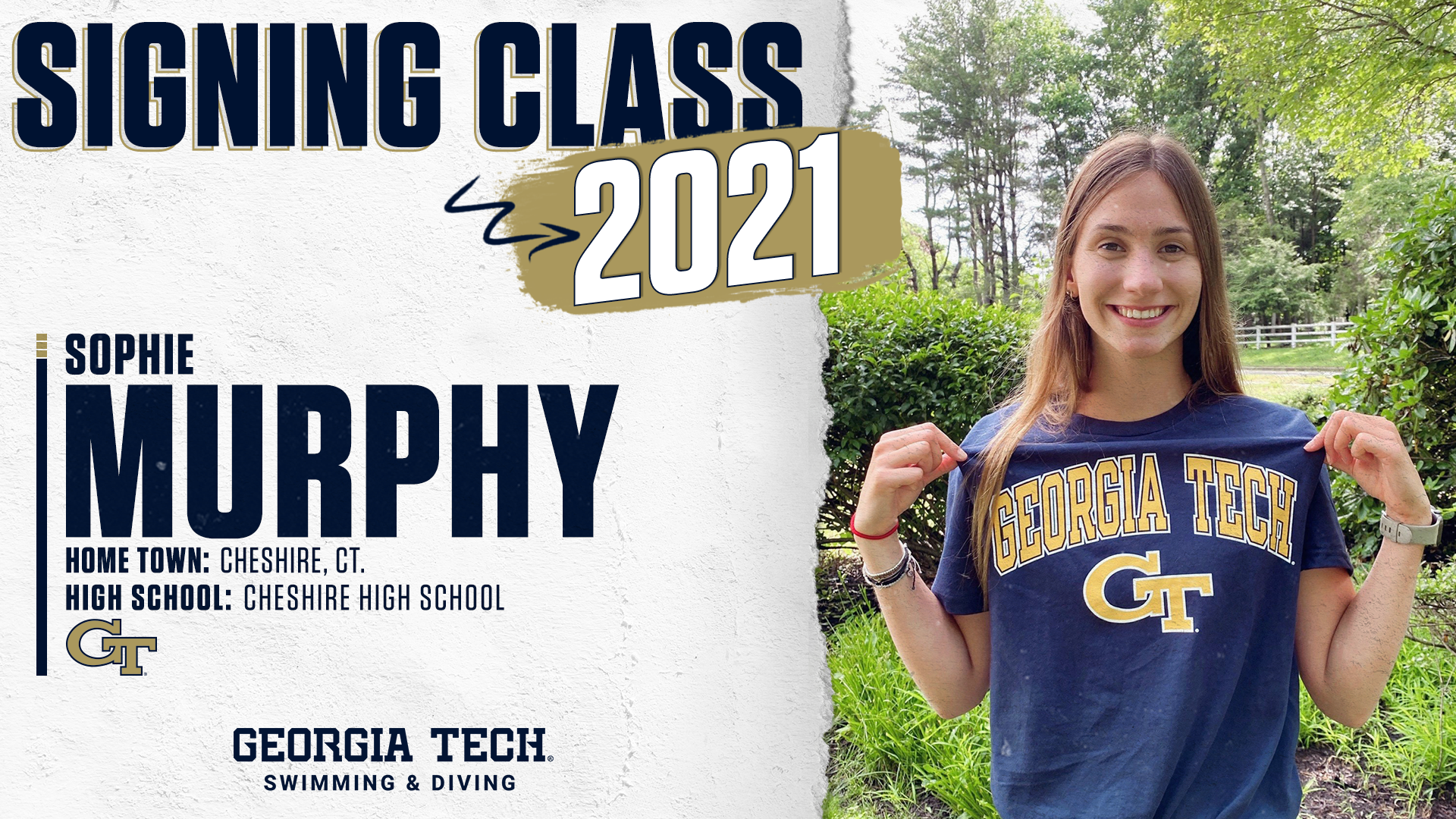 Sophie comes to The Flats from Cheshire, Ct., having competed with Cheshire Y Sea Dog Swim Club. She currently holds the U.S. Open cut in the 100 Free, as well as the Junior National standard in the 50 Free. Murphy went on to win each of those events at Connecticut Seniors. She also placed fourth at YMCA LCM Nationals in the 100 Free, while also taking sixth in the 50 Free at the same meet. Sophie is a USA Swimming Scholastic All-American. She won both events at the CIAC Open last season. 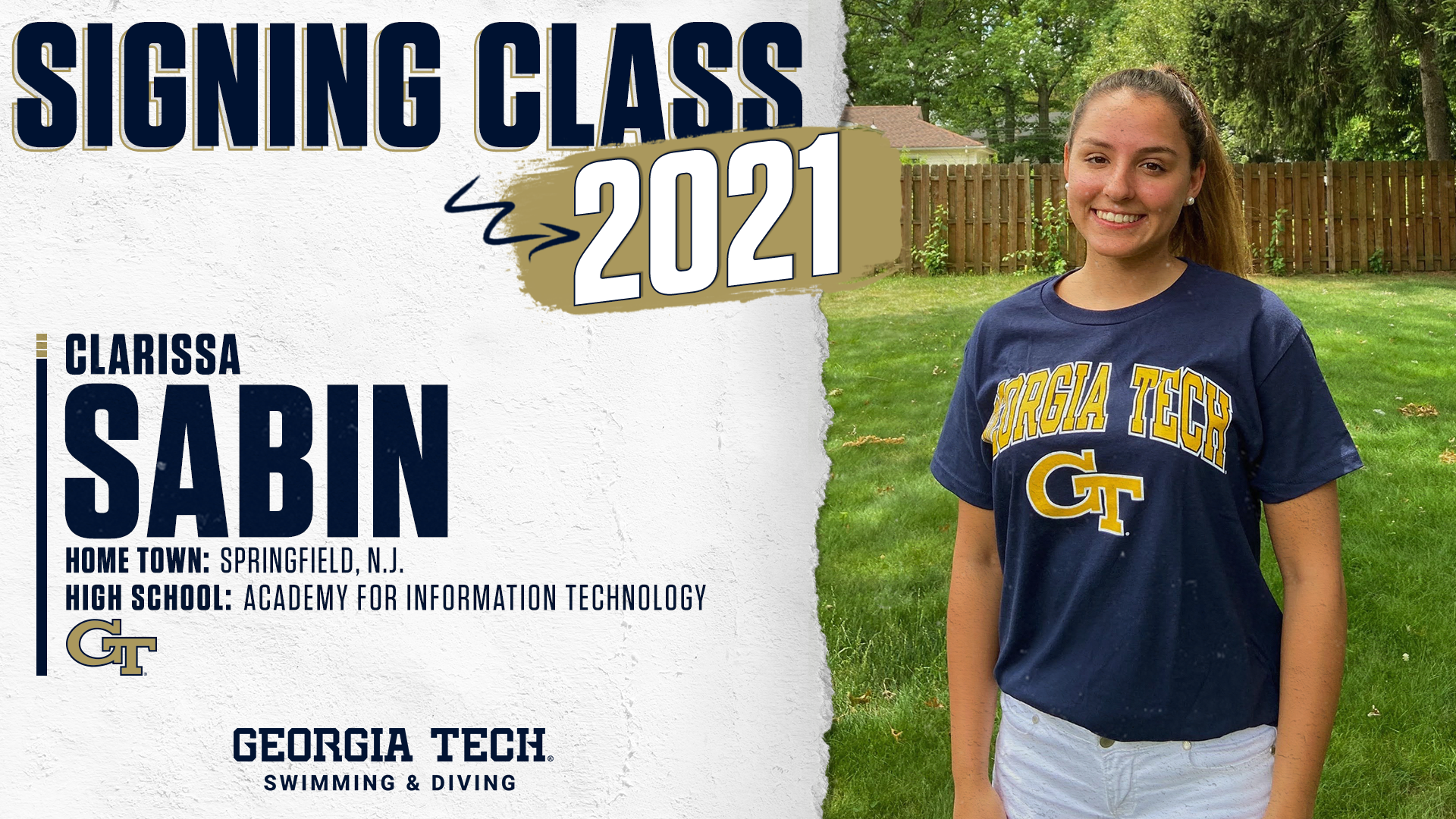 Clarissa heads to The Flats from Springfield, N.J., having spent her high school years at the Academy for Information Technology. She competes in the 100 & 200 Breaststroke, as well as the 200 & 400 IM. She has earned a pair of U.S. Open time standards and participates year-round with the Berkeley Aquatic Club. Sabin won all of her events at the PAC Christmas Invitational last December and earned four top-12 performances at Indianapolis Sectionals in 2019. Clarissa won the 100 Breast and 200 IM at Eastern Zone Seniors last year before taking 14th in the 100 Breast at Junior Nationals. She is a two-time US Swimming Scholastic All-American. 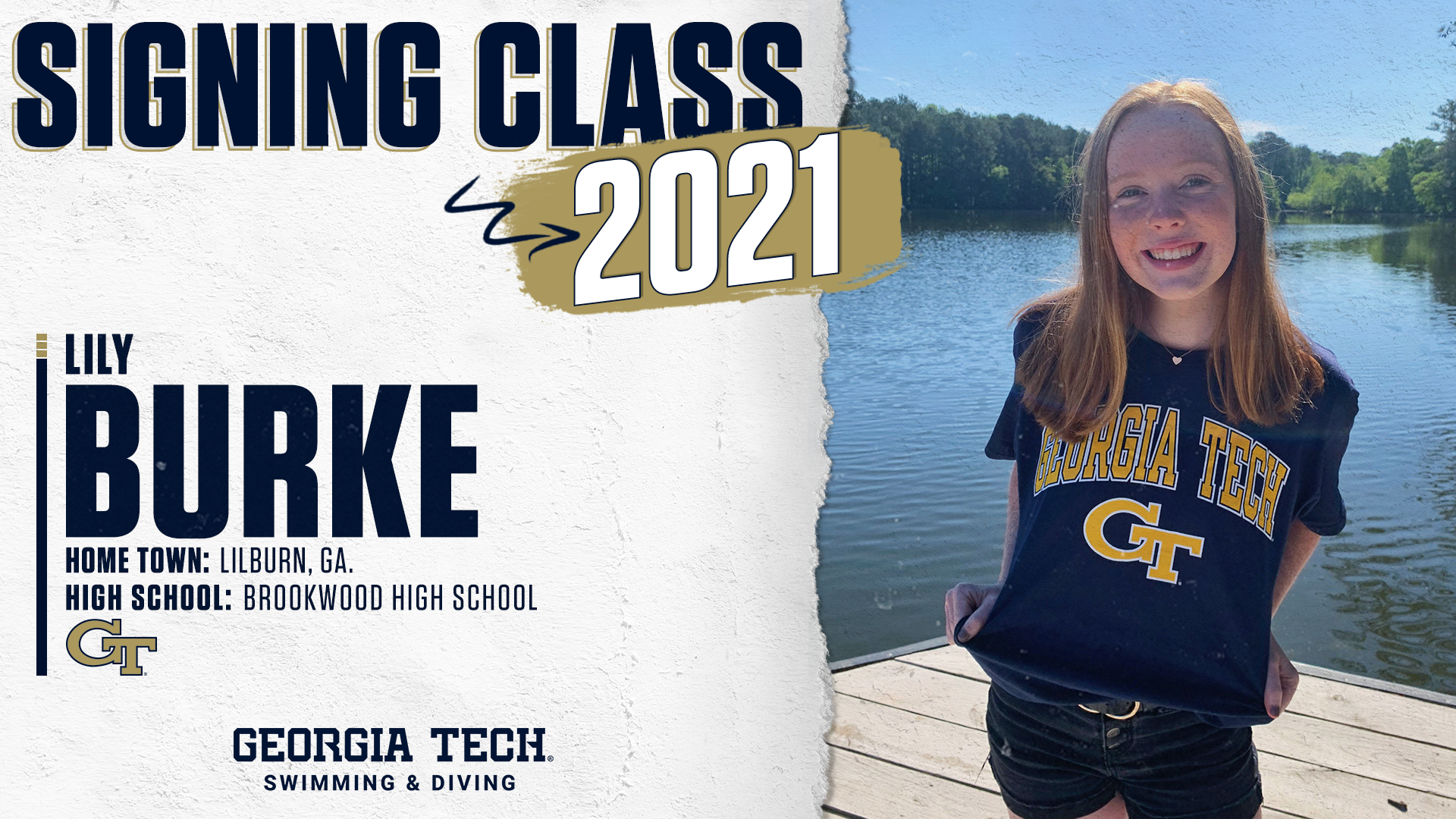 Lily arrives on The Flats hailing from Lilburn, Ga., where she attended Brookwood High School prior to signing with Tech. Burke has made a name for herself in The Peach State during her high school tenure as a six-time Georgia 7A State Championship finalist. Burke took home the Gold in the 100 Free and 200 IM events as a sophomore. Burke competes in club swimming with SwimAtlanta and has earned seven Junior National standards times. Lily won the 100 Free at the Georgia State Senior Long Course Championships last summer, having also earned a runner-up spot in the 50 Free, 200 Free, and 400 IM. 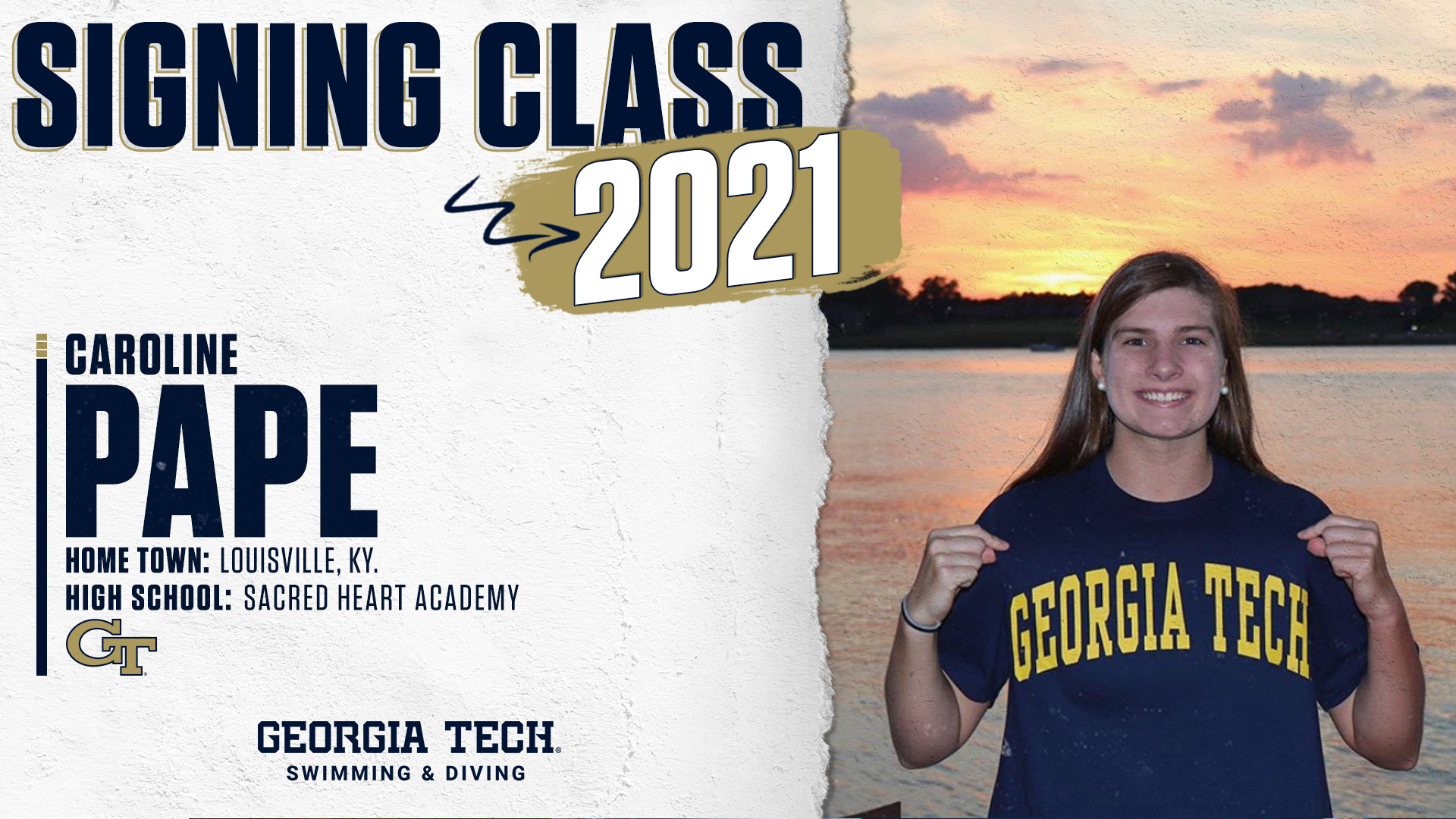 Caroline joins the Yellow Jackets from Louisville, Ky., where she attended Sacred Heart Academy since the start of her sophomore season. She competed during her time in high school for the Lakeside Swim Team. At the 2020 KHSAA State Championships Pape went 50.88 in the 100 Free and 1:50.57 in the 200 Free, finishing second in the 100 while taking the bronze in the 200. Pape was a key member of Sacred Heart’s state championship 200 & 400 Free Relay squads. She earned 2020 National Interscholastic Swimming Coaches Association All-American Honors in four separate events (100/200 Free, 200/400 Free Relay). In 2020 she also earned KHSAA Academic All-State and was picked as Sacred Heart Academy’s Most Improved Swimmer. In 2019 she earned National Interscholastic Swimming Coaches Association All-American Honors in the 200 Free Relay and was also a 2019 USA Swimming All-American. 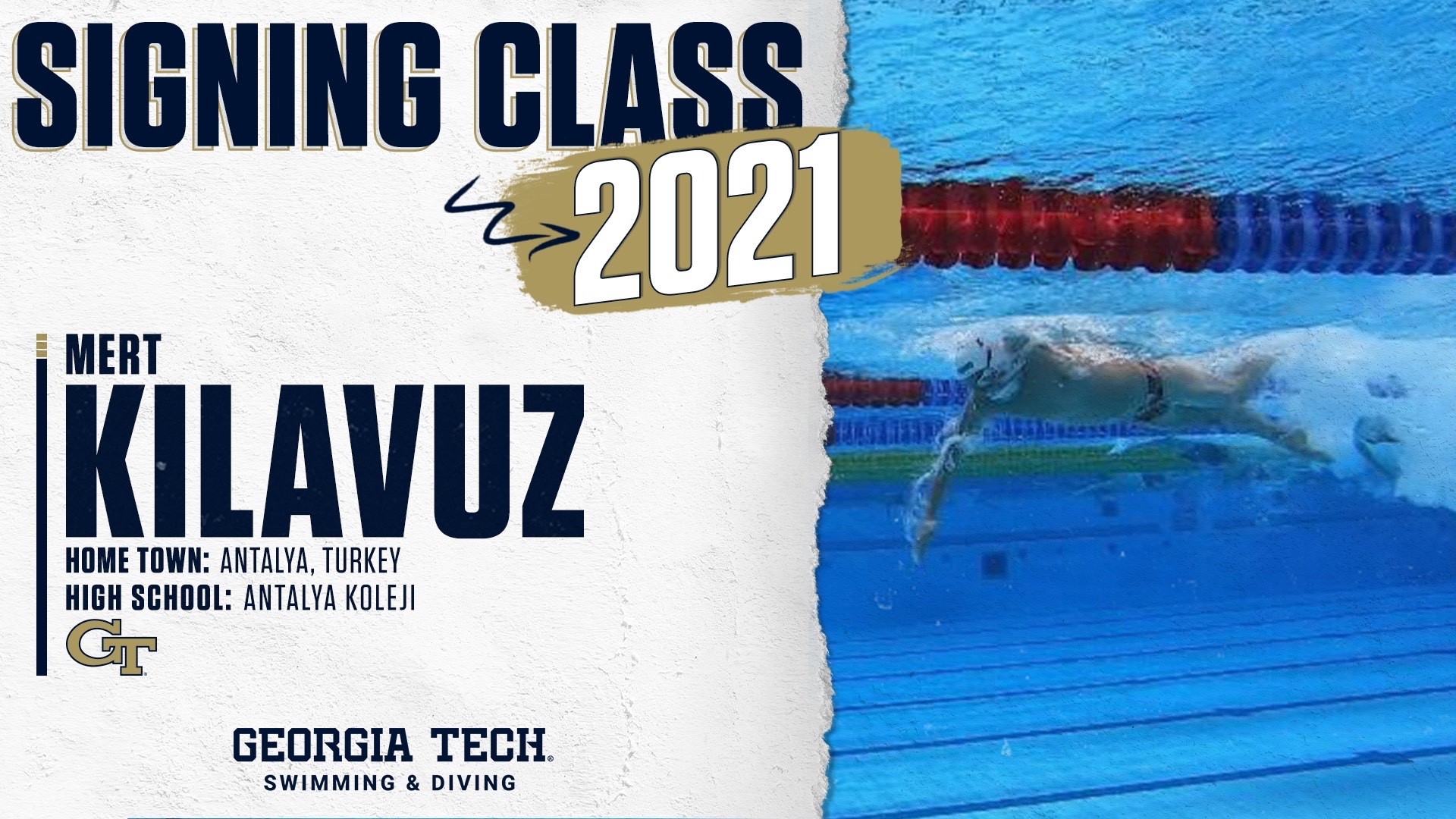 Mert arrives on The Flats from Antalya, Turkey, where he attended Antalya Koleji and is ranked as the No. 17 men’s recruit by collegeswimming.com. He is the Turkish 800 Free record-holder, having clocked in at 7:55.28 at the 2020 Greek Winter Championships. Kilavuz is a distance specialist, owning the 800 free national records in both long and short course. Mert finished seventh in the 1500 Free and 10th in the 800 Free at the 2019 European Championships. At the 2019 World Junior Championships he represented Turkey and took 21st-place in the 1500 Free. Kilavuz followed that up with a Turkish national title in both the 800 and 1500 Free events. 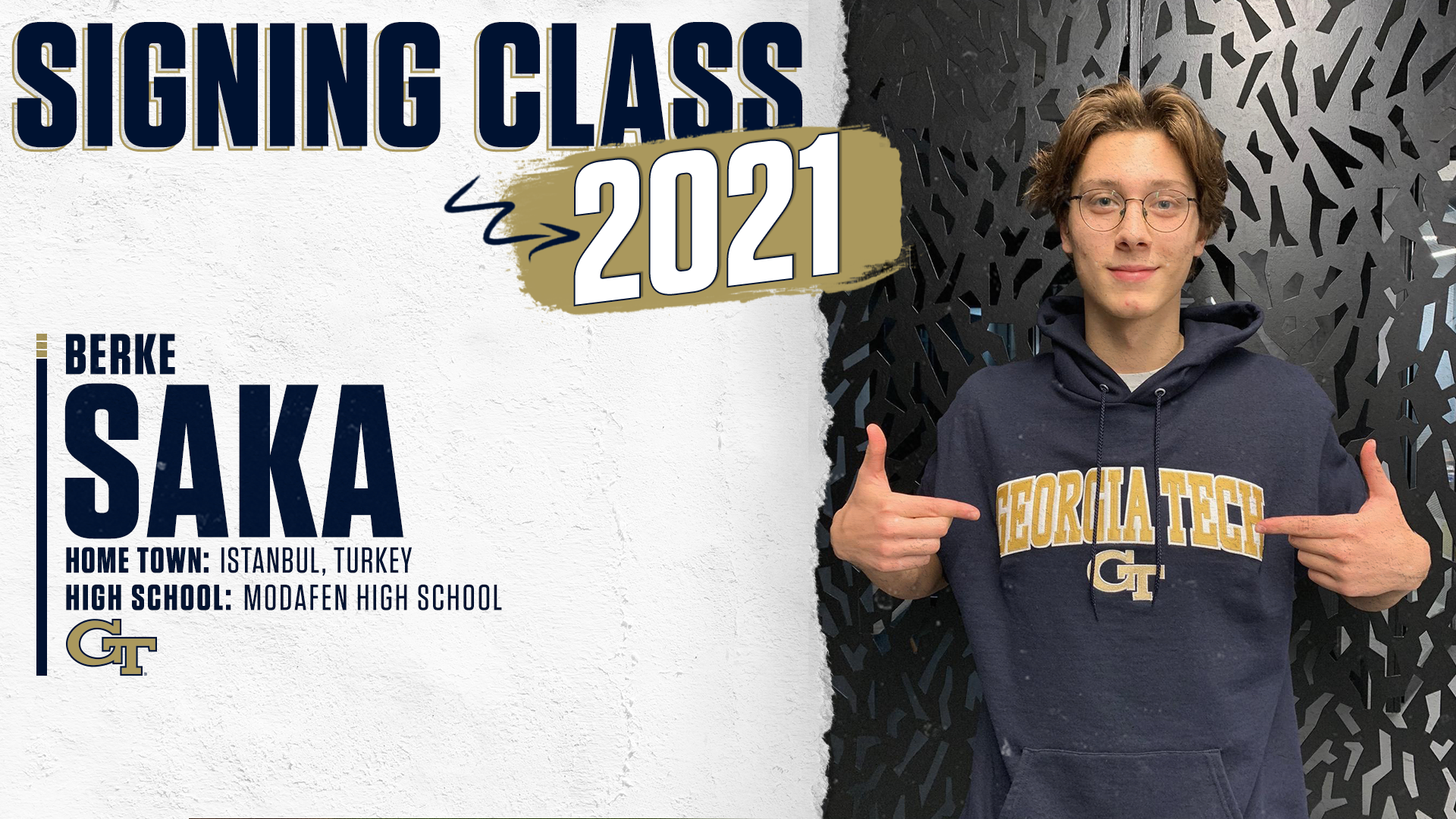 Berke heads to The Flats hailing from Istanbul, Turkey, where he attended Modafen High School making a name for himself as a Turkish National team swimmer. He was ranked as the No. 62 men’s recruit in the 2021 class by collegeswimming.com. In 2019 at the European Youth Olympic Festival in Baku, he took home the silver medal in the 200 Back (2:01.62), while also taking bronze in the 200 IM (2:03.25). Later that year he went on to compete at the FINA World Junior Championships in Budapest, competing in the 100 & 200 Back and 200 IM. This past March, Saka recorded new PR times in the 100 & 200 Back at the Turkish Championships in Edirne. 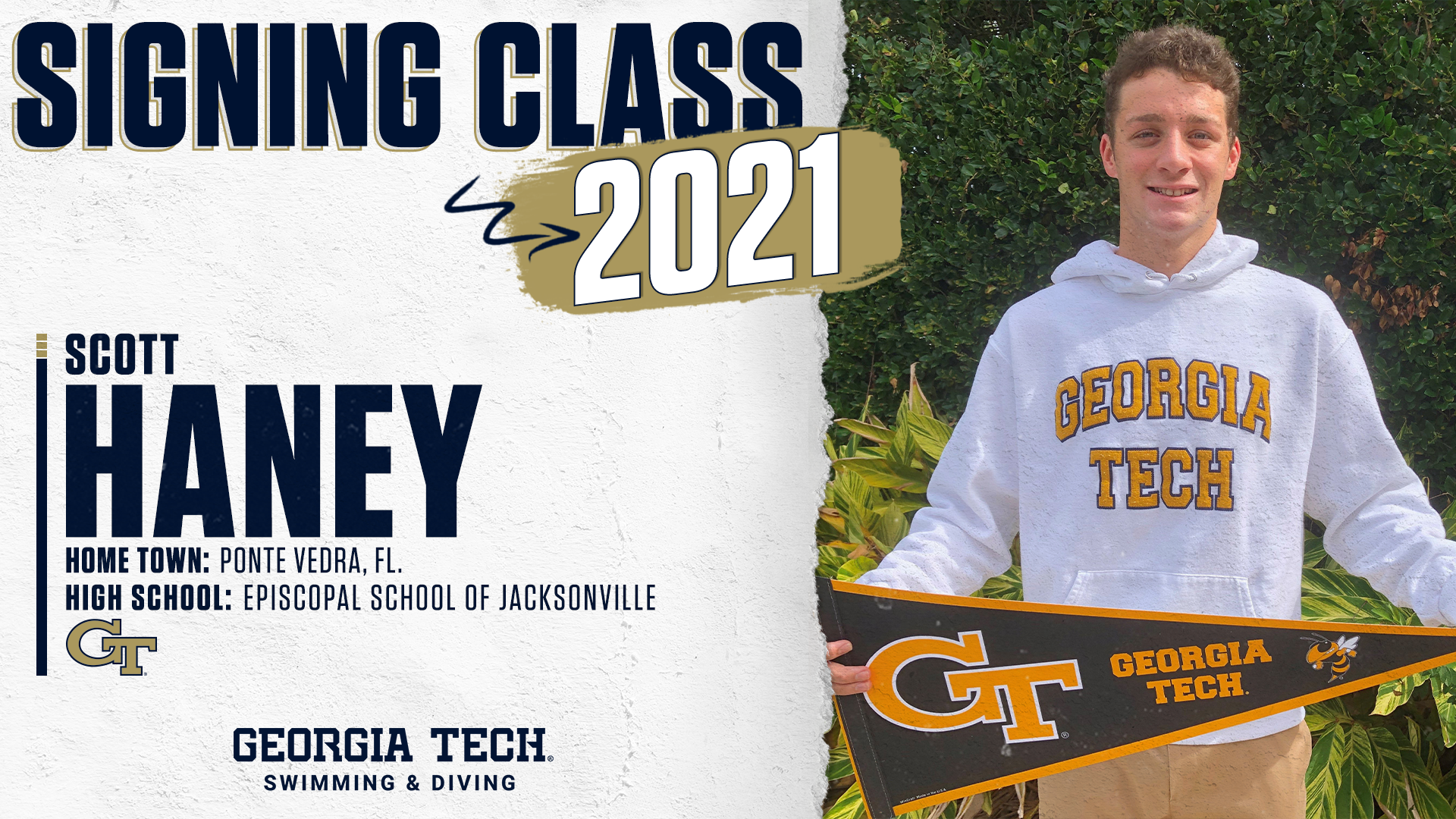 Scott joins Tech from Ponte Vedra, Fl., having attended the Episcopal School of Jacksonville, where he owns several school records. Haney, a freestyle specialist, holds two Winter Juniors cuts and competes year-round with Episcopal AmberJax. Recently, Scott placed eighth in the 200 Free at the Florida OT Qualifier as he earned two personal best times at Juniors East. When he was a junior Haney captured the silver medal in the 200 Free at the Florida 1A State Championships. In his sophomore and junior seasons, he was a key member of the men’s state runner-up squads. 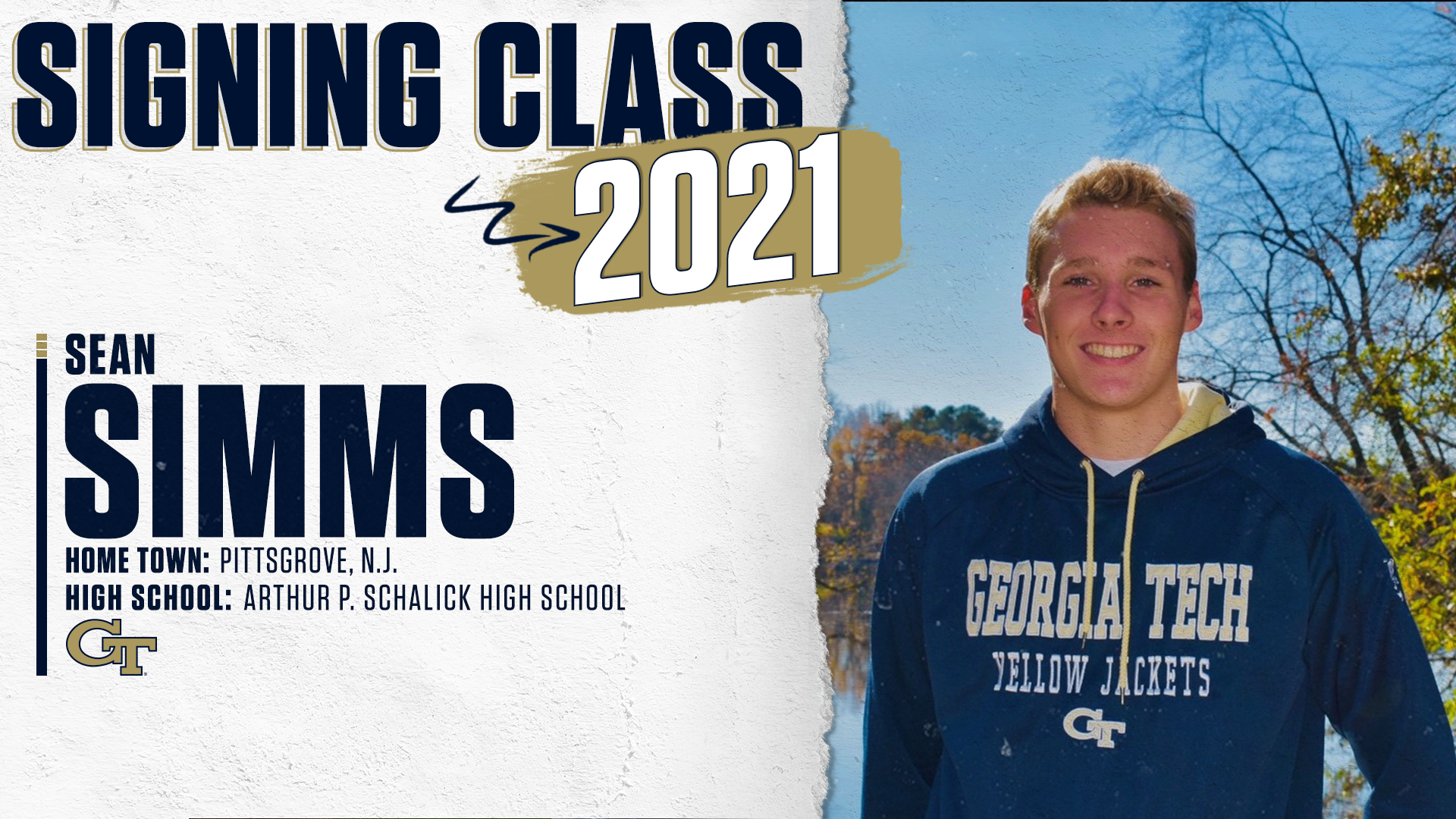 Sean comes to The Flats from Pittsgrove, N.J., where he attended Arthur P. Schalick High School, while also swimming competitively for the Philadelphia Aquatic Club. Simms placed 12th in the 1500m free at Geneva Futures this past summer after swimming for six best times at Mid-Atlantic LCM Seniors. Last winter, he competed in five events at NCSAs prior to grabbing two silver medals at Mid-Atlantic SCY Seniors. He took ninth in the 500 free at the New Jersey Meet of Champions during his sophomore season and has also earned USA Swimming Scholastic All-American honors. 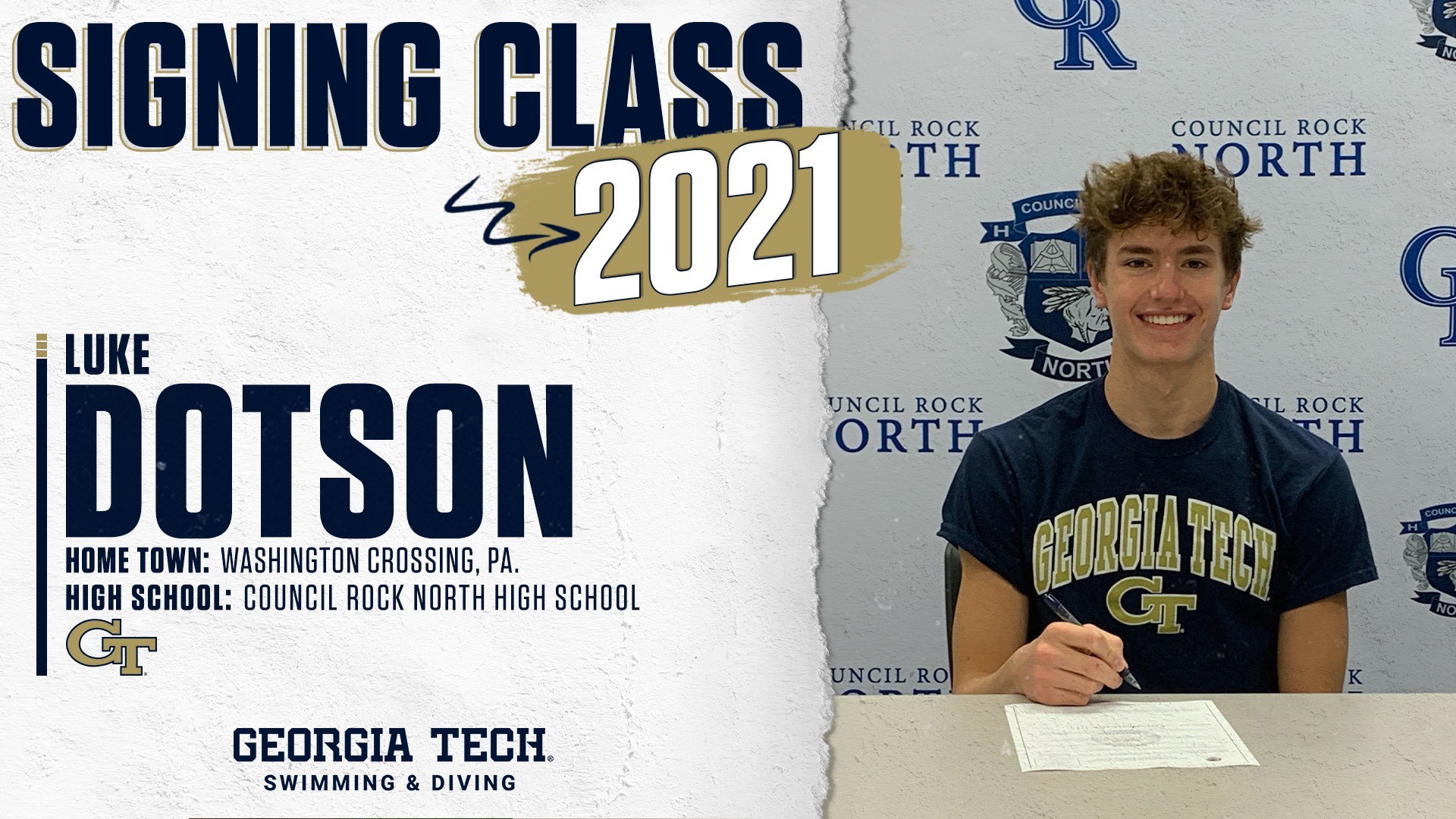 Luke arrives on The Flats hailing from Washington Crossing, Pa., where he swam at and attended Council Rock North High School prior to signing with Tech. In 2019-20 he was an NISCA All-American as a diver. In 2018-19 Dotson earned the Varsity Athletic Award while also being selected as the 2018-2019 MVP for Council Rock High School Varsity Boys Swimming and Diving. Dotson was a team captain for the CRNHS squad his senior year. He also competed with the LOB (Lord of Boards) Diving team during his high school tenure. 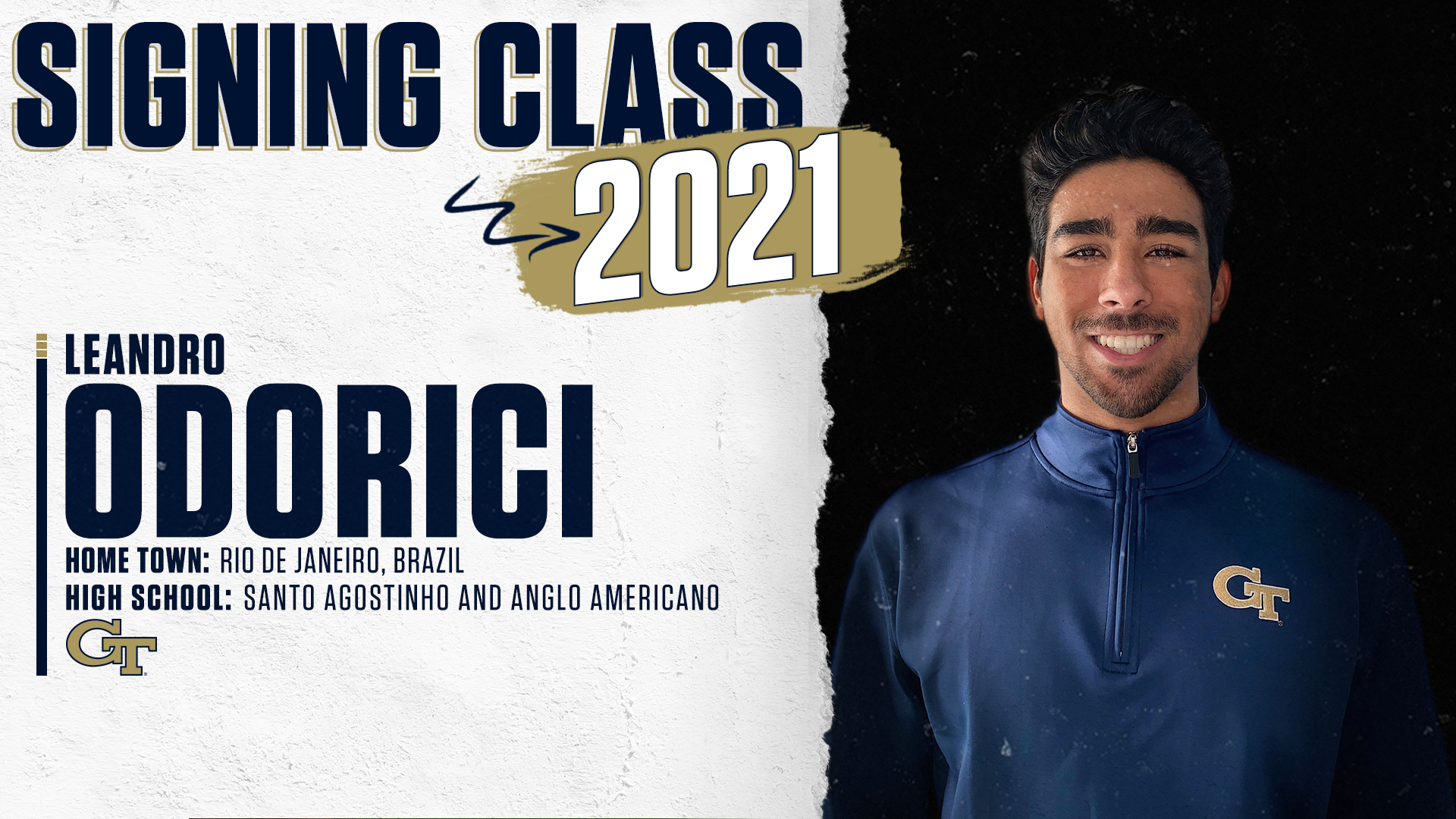 Leandro heads to The Flats from Rio de Janeiro, Brazil, where he attended the Santo Agostinho and Anglo Americano School. In 2018 Odorici won the Brazilian age group titles in the 50 Free and 100 Free. This past February he represented Brazil at the 2020 UANA Cup, where he captured Gold in the 50 Breast (29.56), earned second in the 50 Free and 100 Free, and finished third in the 100 Breast. He also hit a mark of 28.96 in the 200-Medley Relay during his Breast leg of the race to help the squad take the Gold, the first in team history. 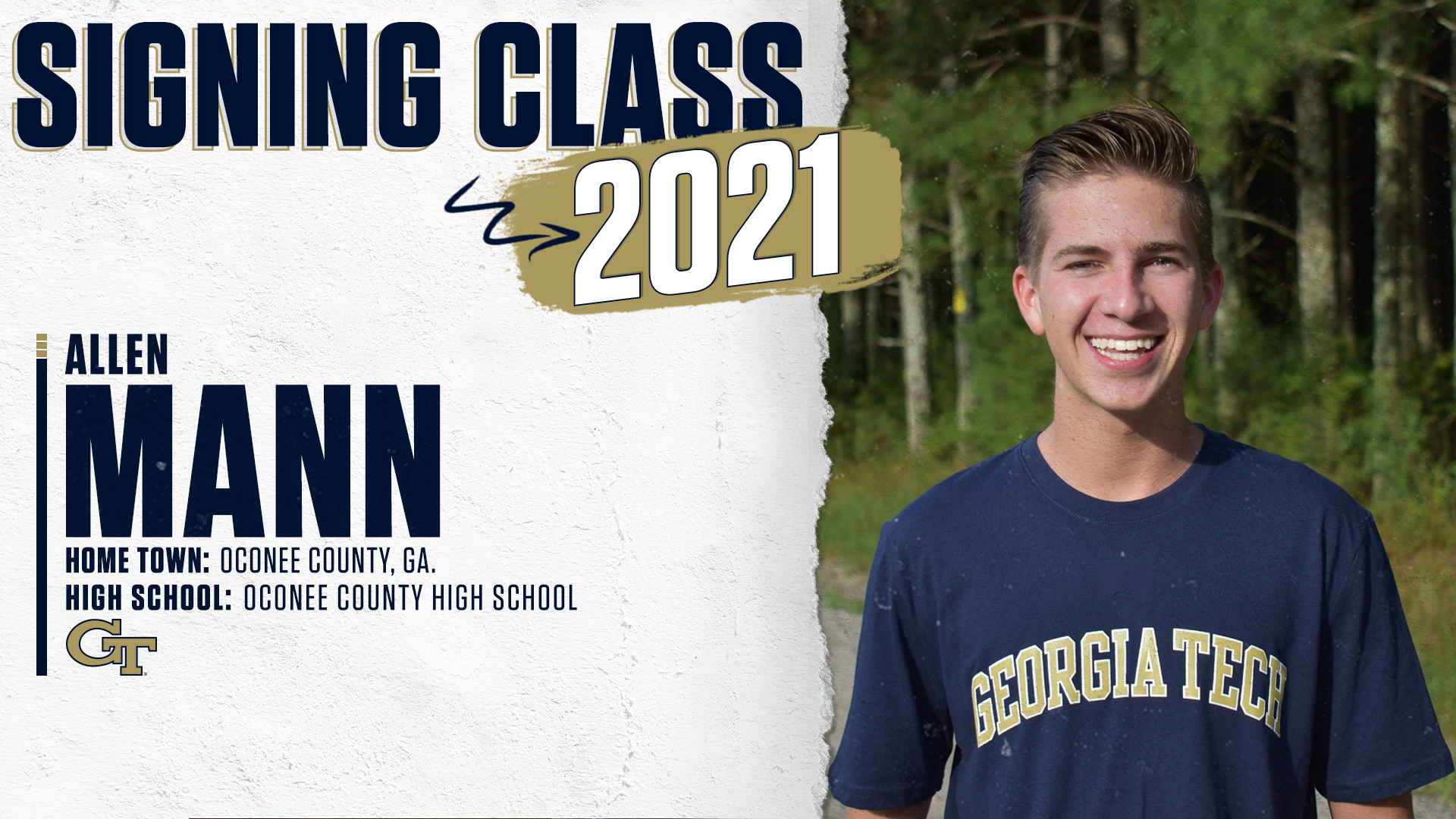 Allen joins Tech from Oconee County, Ga., where he attended and competed at Oconee County High School. Mann is a 2020 NISCA All-American in the 1m Dive. He gained the school record in that event at the 2020 GHSA State Championships. Allen was also a key member of the Atlanta Diving Association Club Team. From 2018-20 he was on the Academic Honor Roll.  His father competed in track & field at Georgia as well.