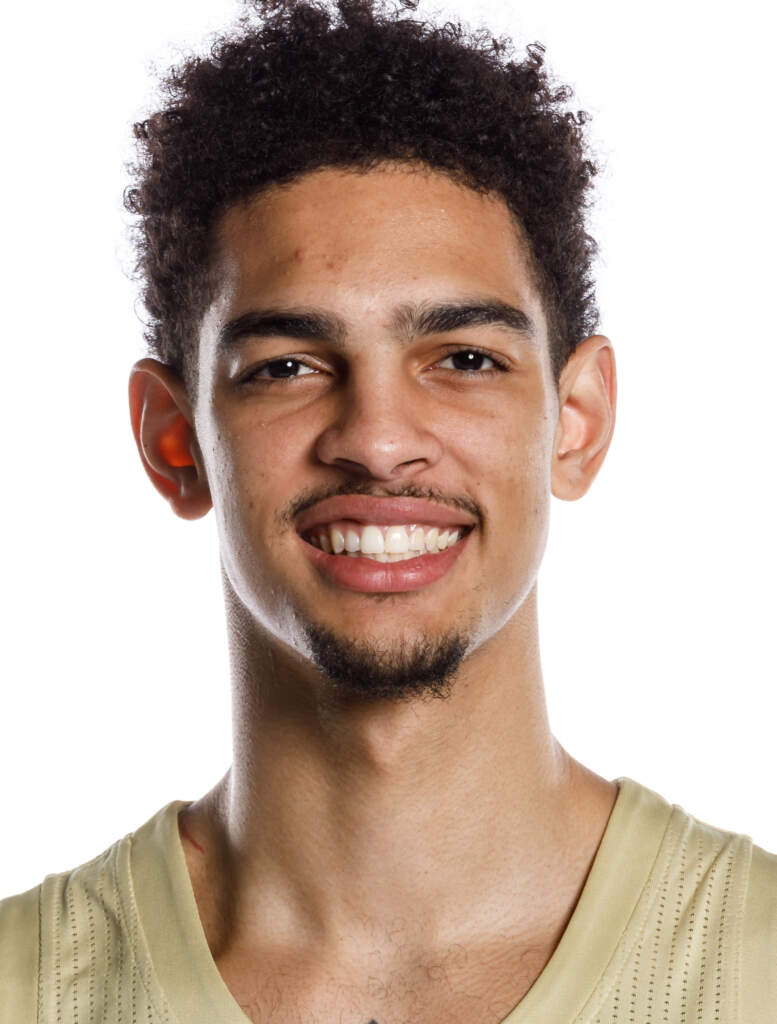 One of the most improved players in the ACC from freshman to sophomore seasons, improving his scoring average more than six points per game overall and four points per game in conference play … Earned honorable mention All-Atlantic Coast Conference honors … Standout guard from the state of Florida who moved into the starting lineup early in his freshman season, steadily improved as the season progressed, setting the stage for a breakout sophomore campaign … Left-handed guard with a high IQ, excellent playmaker and scorer with good positional size … Has developed into one of the ACC’s top outside shooters and scorers … Starred on a national powerhouse at Montverde Academy following an all-star career at Oak Ridge High School … His uncle played college basketball as South Alabama and professionally in Europe … Majoring in business administration.

Honorable mention All-ACC selection who got off to a fast start scoring and shooting the ball in Tech’s first six games, leading the ACC and sitting among the nation’s top five in scoring … AP named him to its All-ACC second team … Finished No. 7 in the ACC in scoring (16.00 ppg) and No. 5 in field goal percentage (47.6) … Hit 42.7 percent of his three-point tries, 44.2 percent in ACC games, the best rate for a Tech player since Anthony Morrow in 2007-08 … Missed three games (NC State, Morehouse, Notre Dame) with a bruised left foot, but averaged 15.7 points and 4.3 assists over Tech’s final 11 ACC games … Scored 22 points with seven assists at Pitt, 24 points with five assists at Wake Forest, 20 points at Clemson, including the game-winning field goal … Knocked down a three-pointer in nine straight games to finish the season, hitting 18-of-43 (41.9 pct.) over that stretch … No. 6 in the ACC in minutes played (35.14 mpg) … Scored 20 or more points five times in Tech’s first six games this season, 10 times altogether … Scored career-best 34 at Georgia with career-high nine rebounds … Added 27 against Bethune-Cookman, including the game-winning points on a layup and free throw with seven seconds left, and followed that with 26 vs, Nebraska … Played well in Tech’s August trip to Spain, averaging 12 points per game while hitting 8-of-19 shots from three-point range, 10 assists and one turnover.

Steadily improving combo guard with a high IQ who averaged 32.3 minutes per game … Ranked 11th in ACC in average minutes in conference games (35.4), and seventh among major conference freshmen … Entered the starting lineup Dec. 19 at Arkansas and started Tech’s last 23 games, consistently progressing after missing six weeks of pre-season practice with a right big toe injury … Tech’s third-leading scorer overall (9.7) and in ACC games (10.4 ppg) … Hit 43.8 percent of his three-point tries on conference play, best on the team and better than all but two of the qualifying ACC players in conference rankings (2.0 made per game minimum) … Connected on 32-for-68 three-point shots over Tech’s last 15 games (47.1 pct.), just 12-of-40 (30 pct.) in his first 17 games … Scored career highs in consecutive games with 18 at Notre Dame, then 22 at Virginia Tech (12-24 FG, 8-12 3pt combined) … Averaged 11.6 ppg in his last five games, including 20 vs. Boston College … Scored in double digits 15 times, including nine times in his last 14 games — had 13 at Miami, 10 at Virginia, 10 vs. Notre Dame in the ACC Tournament … No. 2 on team in steals (44), blocked 16 shots … Hit 71.0 percent from the foul line (66-of-93), second on team in FT and third in FTA … Made tremendous improvement in his rebounding, averaging 3.7 in conference play.

Consensus four-star prospect listed No. 43 nationally and No. 13 at the point guard position by Rivals; No. 45 overall and No. 9 at his position by 247Sports rankings … Attended and played his senior year for coach Kevin Boyle at Montverde Academy in Orlando, Fla., which compiled a perfect 36-0 record in 2017-18 and a claim to the Geico National Championship title … Ranked No. 1 by both USA Today and ESPN Fab 50 … Averaged 14,4 points, 2.8 rebounds and 3.6 assists per game while converting 63 percent of his field goal attempts and 52 percent of his threes (68 made) … Scored 21 points with three rebounds and three assists when Montverde beat Davie (Fla.) University School in the national championship game … Scored 11 points in the national semifinal, a 71-53 win over Findlay Prep (Nev.), a few months after hitting a buzzer-beating 3-pointer as Montverde edged Findlay Prep, 69-67 to win the Montverde Academy Invitational Tournament … Was named MVP of that tournament with 26 points in the title game … Prior to that, was a two-time all-area guard at Oak Ridge High School, which went 66-20 in his three seasons as a starter under coach O’Neil Lubin … Averaged 22.4 points, 6.9 rebounds and 4.8 assists as a junior for the Pioneers … Also was an honor roll student with a 4.5 GPA.