With its seventh-straight victory, No. 4 seed Georgia Tech (16-8) advances to face top-seeded Virginia (18-6) in Friday’s ACC Tournament semifinals. Tipoff is set for 6:30 p.m.

Georgia Tech’s triumph over 13th-seeded Miami did not come easy, as the Hurricanes shot a 52.5% from the field while limiting the Yellow Jackets to 39.3% shooting in the first half to take a 33-29 halftime lead. The Jackets’ misfortune in the first half was punctuated by a scary knee-on-knee collision between Miami’s Isaiah Wong and Tech’s Jose Alvarado that required Alvarado to be carried to the locker room for observation late in the opening period.

Miami (10-17) extended its lead to seven points at 41-34 less than two minutes into the second half but Tech responded with an 11-3 run, kick-started by a 3-pointer by Moses Wright and capped by a driving layup by Jordan Usher that have the Jackets their first lead of the second half at 45-44.

The Hurricanes regained a four-point advantage but Tech took the lead for good with a 14-2 run midway through the second half that turned the four-point deficit into a 61-53 lead with 7:19 to go in the ballgame. Alvarado – who shook off the knee bruise to return to the game at the start the second half – scored five points during the run, including a 3-pointer that extended Tech’s lead to four points and a layup that capped the spurt and gave the Jackets an eight-point advantage.

Alvarado also made perhaps the game’s biggest play in the waning moments. With Georgia Tech clinging to a 68-66 lead following a 3-pointer by Miami’s Kameron McGusty with 32 seconds to go, an inbounds pass by Usher appeared to be on its way out of bounds, which would give possession back to the Hurricanes. However, Alvarado chased down the loose ball, collected it just before it went out of bounds, played give-and-go with Bubba Parham, then fired a pass ahead to a wide open Usher, who slammed it home to seal the victory.

Usher led four Yellow Jackets in double-figures with 15 points, while Alvarado and Michael Devoe chipped in with 13 apiece. Devoe made 3-of-4 3-pointers and also dished out a game-high seven assists. ACC Player of the Year Moses Wright was limited to just seven points by a Miami defense determined to stop him, but pulled down a team-high six rebounds.

McGusty led all players with 25 points and seven rebounds for Miami.

Georgia Tech’s win was its first ACC Tournament triumph since an 88-85 overtime victory against Clemson in the opening round in 2016. Tech has advanced to the tournament semifinals for the first time since it played in the ACC title game in 2010. 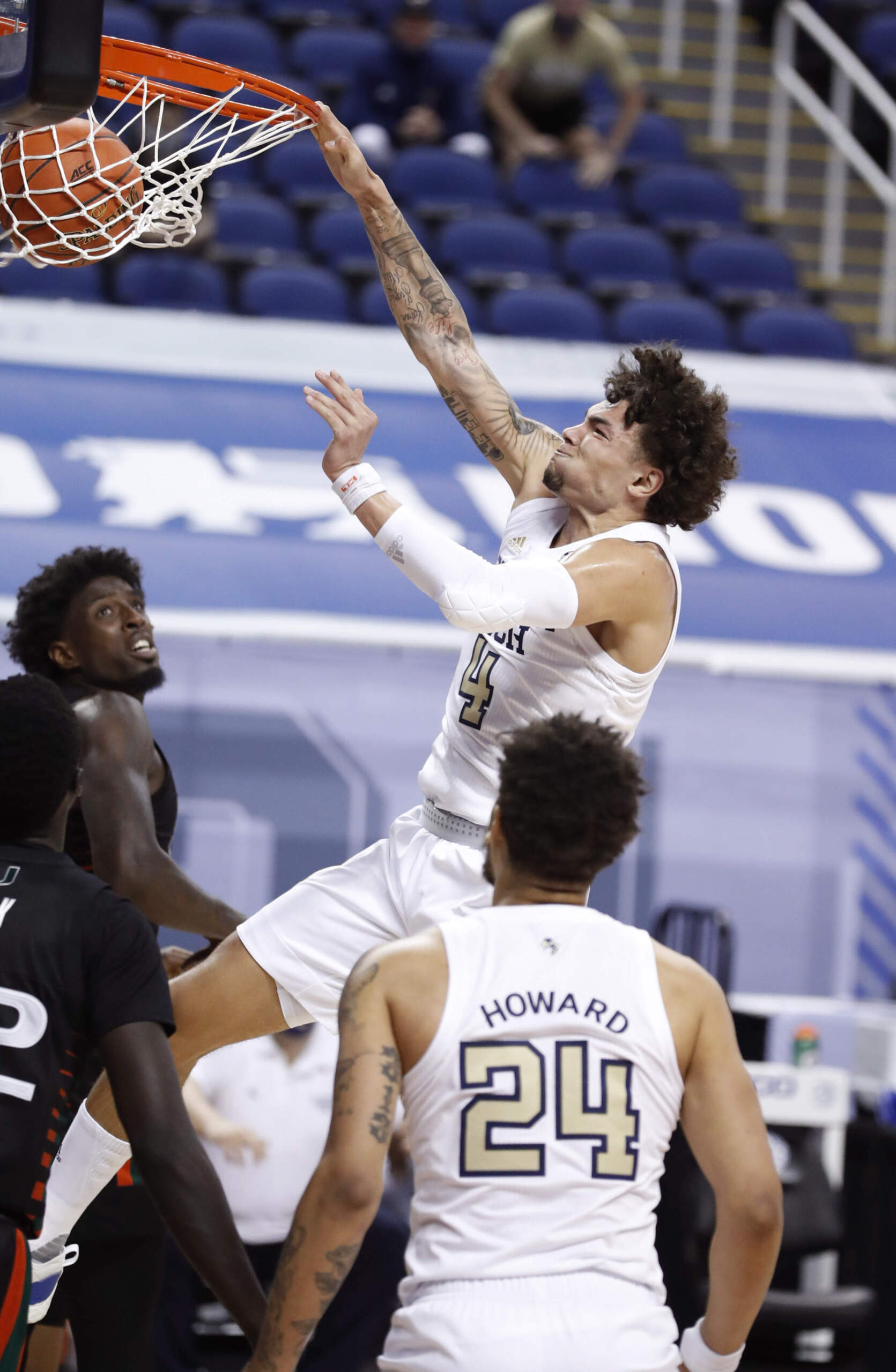 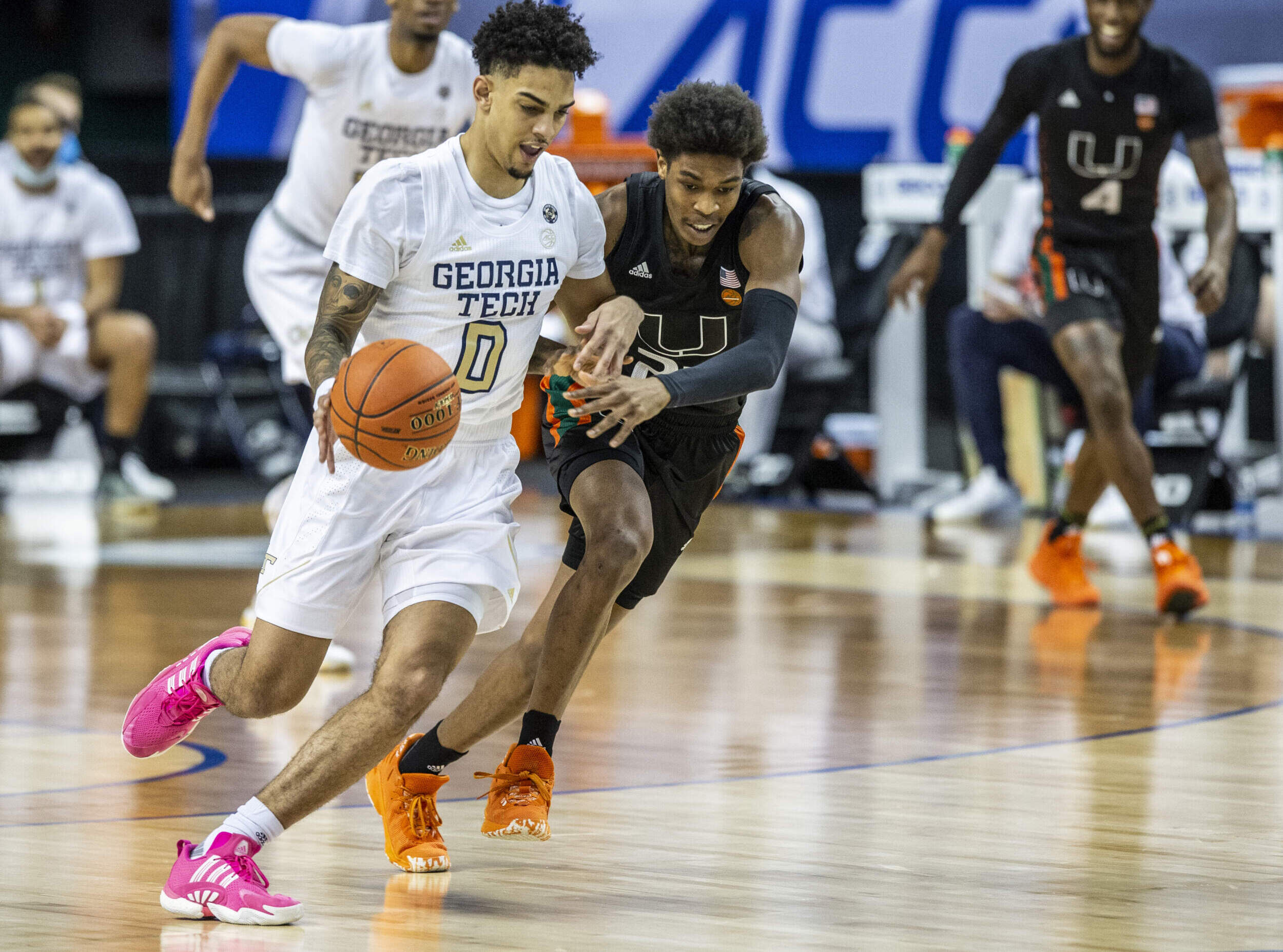 Michael Devoe scored 13 points on 3-of-4 shooting from 3-point range and dished out a game-high seven assists in the ACC quarterfinal win over Miami. (photo courtesy of the Atlantic Coast Conference)