“First of all, I’ve got to give hats off to Virginia Tech. That’s probably the best group of players we’ve seen since we played Temple. Really good players across the board at every level, offense, defense, offensive line, defensive lines. I thought it was the first game that the level of attrition caught up to us. I’m proud of the way the guys fought. There were a bunch of guys playing roles that they had not had to play and they came out there and battled. But when you get yourself in a hole that much that early, you can’t overcome it. But again, credit to Virginia Tech and credit to their players. They have some really, really good players.”

“You guys were out there. The energy was good. We’re still constantly working on fundamentals and technique and getting better in every phase of the program. So, those things were good. And then you go out there and they started hot and were playing well, and I don’t think we started the way that we can and the way that we will going forward. I thought it was a good week of practice. I thought the guys came in with the right mindset. We don’t make any excuses in this program.”

“They’re resilient. I’m going to leave the comments that I made to them in the locker room, that’s sacred. I just told them the truth, that’s what we do. Here’s the reason why what happened, happened. And we’re going to come back tomorrow morning and watch the film with our coaches, get it corrected and we’ve got to have short memories because we play at home on Thursday night at Bobby Dodd. We’ve got to get healthy in a lot of spots, trying to get some guys back on a short week. Some new guys who might have gotten banged up, we’ve got to get them healthy as well. But the mood and the mindset, when we get this thing regrouped we’ll have it, and we’ve just got to make sure we’re in the right physical space to be able to play Thursday night.”

On the ineffectiveness of the offense

“Being able to affect the game, being able to make sure we have the motions and the shifts right on every level. There are two plays, obviously, we wish we could have back, procedurally. But against a team that’s got a really, really good roster we can’t have self-inflicted wounds like that. When you’ve got a football team, you’ve got to make sure that everybody’s on the same page, and on those two instances we were not. We will get better going forward. There were some guys who were out there making some plays and we’ll continue to build on those moving forward.”

On being shut out

“I worry about the process that we go through. We’ve got to do a better job collectively making sure that we’ve got guys throughout the entire organization learning how to play at a high level regardless of attrition. They’ve got to be ready, when it’s their turn, to step up and play and play at a high level, and to play physical, tough football. We’ll continue to work on that so we can always be playing at a high level in whatever those things are. We’re just going to be doing good things.” 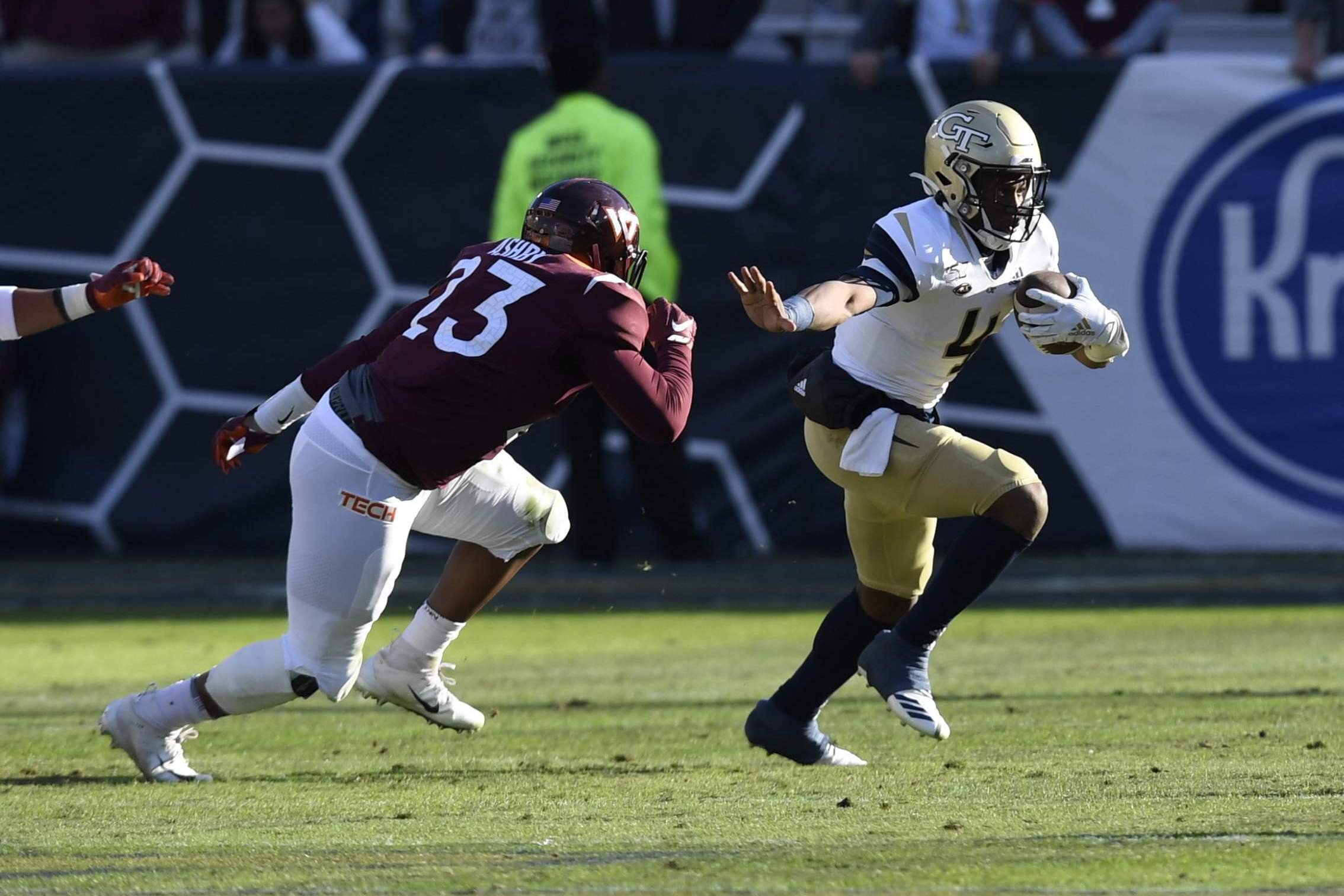 “I’m awfully happy for our kids to make a bowl game. That’s something we take very seriously and we’re very proud of. I’m happy that our kids got to extend that streak. I’d like to thank our fans for turning out. They were awesome, supporting our kids, traveling. I feel fortunate that we were able to play a lot of people. We spent the better portion of the second half just trying to get the game over with. We saw some young guys go out there and compete a little bit. It’s fun to be a part of when the starters do their job, and you get some ample time to get other guys in. We haven’t done it all year. We haven’t had that opportunity. It was fun to get those guys some game.”

On the defensive team’s dominance of Georgia Tech

“I thought we had a good plan. We’ve been playing well. I don’t know if surprised, or pleased, pleased is probably a better description. We’ve got several guys with experience now, on both sides of the ball, but particularly on defense a bunch that have played together, and certainly have come together.”

“It’s an interesting situation to be in. Usually it’s much later in the game, and you don’t throw the ball any. But we subbed early and tried to continue to run our offense and defense, and to have them execute was encouraging and rewarding for those guys, to get in there and get to operate a little bit and be efficient. So it was a good sign.”

On the variety in your offense early

“With the exception of the first drive, I thought we were pretty efficient. We had some big plays. We didn’t really score on the big plays, but [we had] big chunk plays, Tayvion (Robinson) with the reverse, James (Mitchell) with the screen. So I liked our execution. I don’t know that we went in trying to do anything different than we try to do all the time, but we certainly were efficient there early on.”

“I think our execution level continues to increase. Our guys are playing with some more confidence. As a group, we’ve been able to have some success with some things and do some things off of that, if that makes sense, that has been able to keep people a little bit off-balance. It starts with being able to run the football. I go back to that all the time. That continues to help the variety of what we’re able to do.”

On sensing the confidence level of the team

“We have a lot of football to play against some very good teams, but I think they’ve seen the improvement they can make. They do have some confidence. I think it’s because they’ve had a little bit of success, and they’ve stuck together through some hard times, that makes them feel better. I still go back to, from a preparation standpoint and watching the film, the execution level on both sides of the ball has been higher. We’re doing a better job in preparation. I feel like we’re better emotionally, certainly less fragile than we were. That probably stems from a bunch of things.”

“Every week’s different, you play different schemes, people do different things coverage-wise, all that sort of stuff. It’s little easier to get guys in the tight end/H-back position when you can run the ball. We’ve been able to do that, at least somewhat efficiently, and that’s opened up opportunities on some play action and nakeds that James can get into space a little bit. He is a good athlete, he can run. And he’s made some big plays as a result of the execution and being able to run the ball.” 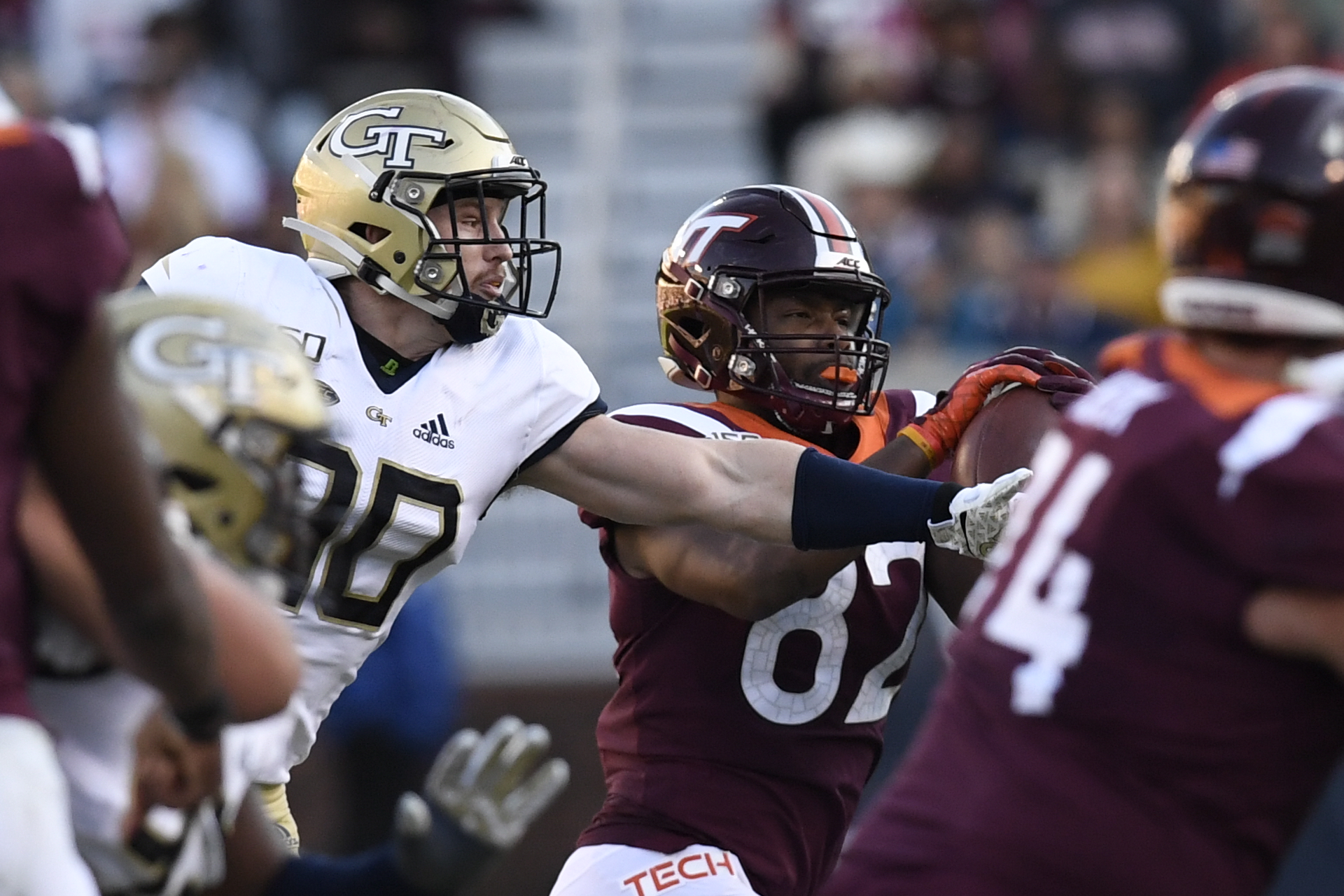 On how Virginia Tech leveraged Georgia Tech to get outside:
“Just leveraging us as you said yourself. That’s on us not setting edges and that was a big point of emphasis of us going into this game and we just didn’t execute it. That’s their game, is getting on the perimeter and getting slip screens in, the wide delays and stuff like that which they were successful with.”

On what caused the issue with eye discipline:
“We were definitely prepared, this has absolutely nothing to do with the coaches, the coaches gave us a great game plan. I take this personally as the leader of the defense. This is on us; we did not execute. We had coach in some of our meetings, if you look at what you’re supposed to look at the plays will come to you and it’s just guys trying to overcompensate not trusting other guys on the defense to make the play and when you do that, you leave guys open. I included, there was one long wide delay play where I was supposed to cover the guy and I tried to take off on the stretch and they got me. So, we’re not pointing fingers at anybody but as a whole defense, you’ve got to trust the guy next to you and you got to do your job.

On individually preparing themselves for a short week:

“You just have to speed up the process. You keep your same process; you watch as much film as you can earlier and you go get treatment. I mean this man [David], lives in the treatment room and I’m probably going to do that the next few days too.

On The team’s ability to move past this game:

“We’ll be here early in the morning; we’ll go over the film and after you watch the film you get the corrections you move on. It’s a rule, it’s done, and you move on. As a leader of my room personality, it’s on me to get these guys to show them that we have a short week, you gotta speed up your process. That’s just going to be on the older guys both offense and defense to show the younger guys that we are young, and they may not know right now so that’s just on us guys who do have a process to show them.”

On the struggle to get offensive line going after shooting themselves in the foot early on:

On Individually preparing themselves for a short week:

“Like he said, just get in early tomorrow, watch film, correct it and get out to practice tomorrow and just speed up our weekly process. Days are just fast forwarded now; tomorrow is like a Monday or Tuesday instead of Sunday. We just move forward, get ready to play NC state and just move on from this one quickly.

On evaluation of Jordan Yates Performance:

“It was cool to see him out there. He loves football and he loves to play. I think when he got the opportunity to go out there his eyes lit up, he had a big smile on his face, and we were all excited on offense to see him. Obviously a very talented player, I think you guys saw that out there, he can make a lot of people miss, can make all the throws so we were all excited for him. I was happy he was able to get into a game and really play in a situational opportunity and make some plays.  He’s a good dude in general so it was good to see a good dude go in there and play well and he works his tail off too so I’m really excited to see what he can do.”

On What Virginia Tech did to get in the back field today:

“They pressured a lot, pressured almost every snap but we’ve got to pick it up, no excuses.

On how good Virginia Techs’ s defensive line compared to others he’s faced this year:

“They had a good scheme, they’re a good team and they’re well coached and they executed better than we did today.

“Jordan is a great kid; he works his tail off. He’s worked as hard as anybody else here since day one, so I was happy for him to get a chance to compete and he did a great job.