“First of all, I’ve got to give The Citadel a lot of credit. They came out and played really hard. They played really physical, sound football. There were some times that we were playing really good football on both sides of the ball as well. The thing that I’m disappointed in and blame myself for was the penalties. We played two games and only had four penalties. And then there were some times today when some frustration set in and some chippy-ness set in and we cost ourselves early in the game. When we get third down stops and then it gets added to a first down. David Curry has a chance to flip the field on an interception and we lose 15 yards. So that is uncharacteristic of what we’ve shown the first two weeks. So that’s on me and we’ll get that fixed, because it was really clean football the first two weeks of the season, and then today, for whatever reason, there were some costly penalties that affected the outcome of the game.”

“The transition that we’ve gone through, no doubt is monumental. But every single day is a new experience to get better. This is just one of those times, a bump in the road that we’ve got to overcome. We’re going into a bye week and we will get the things rectified very quickly. The attitude, the demeanor in that locker room was appropriate. They were upset. They want to get better. They don’t want to put that kind of performance out there. So they’ll be committed to getting better when we get back to work on Tuesday.

“He kept it together, kept changing the calls, kept getting us lined up. So, I’m proud of him. David Curry is a battler. He is a warrior. He’s one of the toughest kids I’ve ever been blessed to coach. Highly intelligent, high character, high-care factor, and it’s a blessing every single day that I walk into this building and get to coach David Curry, along with every single one of the players on our team.”

On who is going to play week to week:

“The people that can help us play really well on a college football Saturday or Thursday or Friday or whenever we play, if they’ve earned the right to contribute to this team, they are going to play. And we will continue to do that. These guys are battling to earn playing time, and however much playing time they get is determined upon what they do and their body of work since we’ve been here. And it will continue that way moving forward. Everything matters. We’ve got great young men in that program that are hurting right now. And a lot of it was self-inflicted. And we have to find ways to fix all of those things. And the guys that can contribute and help us play at a high level are going to play, regardless of position. So, the guys that can help, the guys that are unbelievable teammates, the guys that are really good football players are going to play and they are going to play at a high level.  And we will keep getting creative and innovative with things they can do.” 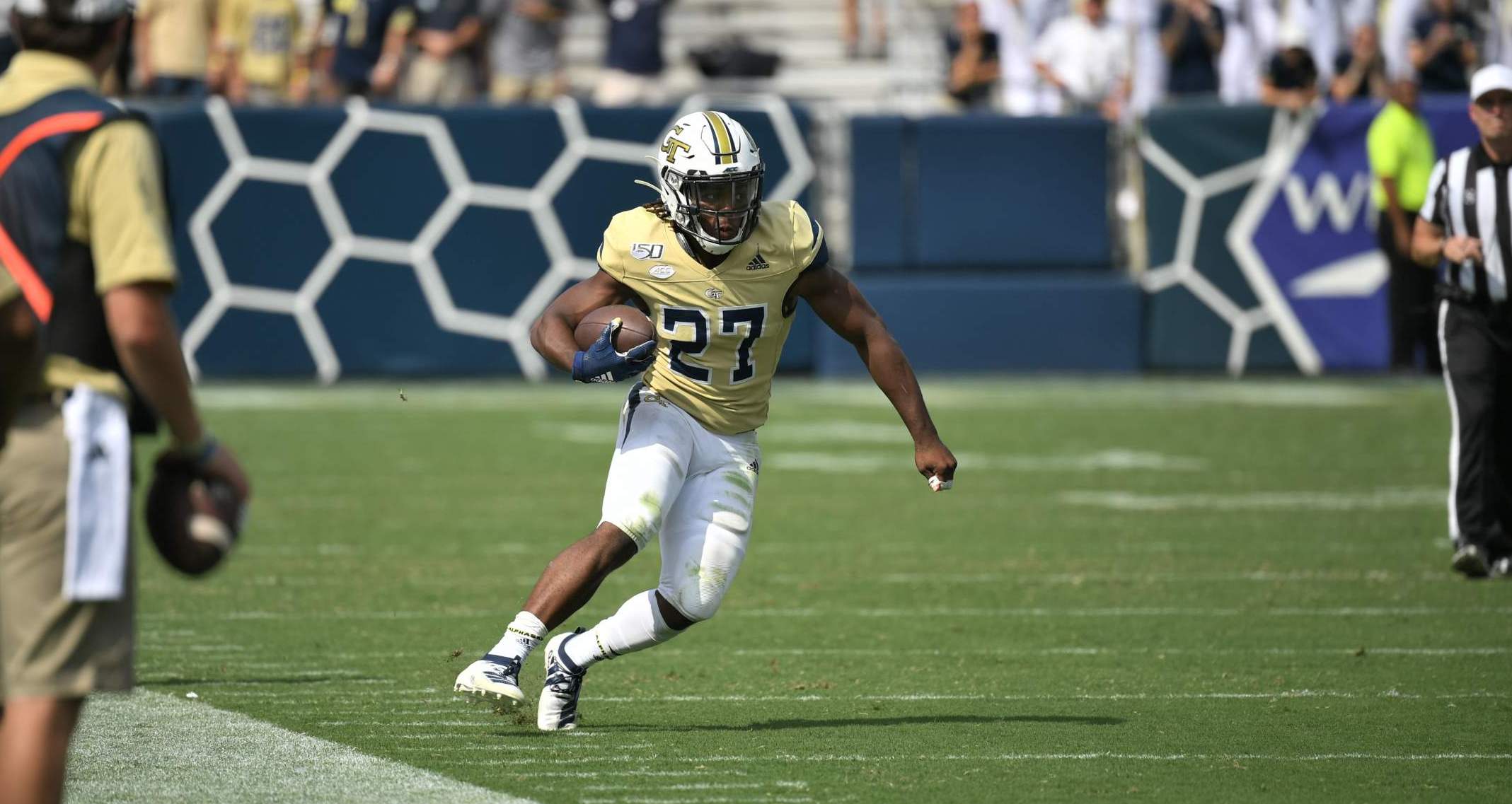 On how to prepare for the Temple game:

On what made stopping The Citadel difficult:

“It comes down to guys doing their jobs. It starts up front and then to the linebackers and then to the secondaries and everybody’s got to do their job. At certain points, guys just didn’t do their jobs. At other points, it’s when drives should have been over and people just do stuff like 15-yard penalties here, 15-yard penalties there. The Citadel, they were the better team today, but it was us and we were the reason.”

On his two catches:

“In this offense, compared to last year, we are given more opportunities. I just took those two chances today to make the most of them and one of them just happened to be a touchdown.”

On what the offense can improve on going forward:

On what they need to do in the next two weeks:

“First, we are gonna watch the film and correct the things that we messed up on. There were a lot of things we need to fix. Next step, is to put the loss behind us and stay optimistic to what is to come.”

On what The Citadel was doing well on offense:

“You’ve got to give credit to The Citadel. They ran the triple option and they ran it the way it is supposed to be run. We tried to do our thing on our side, and we were supposed to take care of the ball more and score touchdowns every time we touch the ball.”

On the offensive line’s performance:

“It’s always a blessing to have a line like I have. Jahaziel [Lee] went down, Hamp Gibbs had to step up. I’m glad that it wasn’t new to him. Coach [Geoff] Collins always emphasizes that everyone always gets the same reps, so I’m just glad that he got reps in. I give credit to the offensive line. They did their thing and we just came up short.” 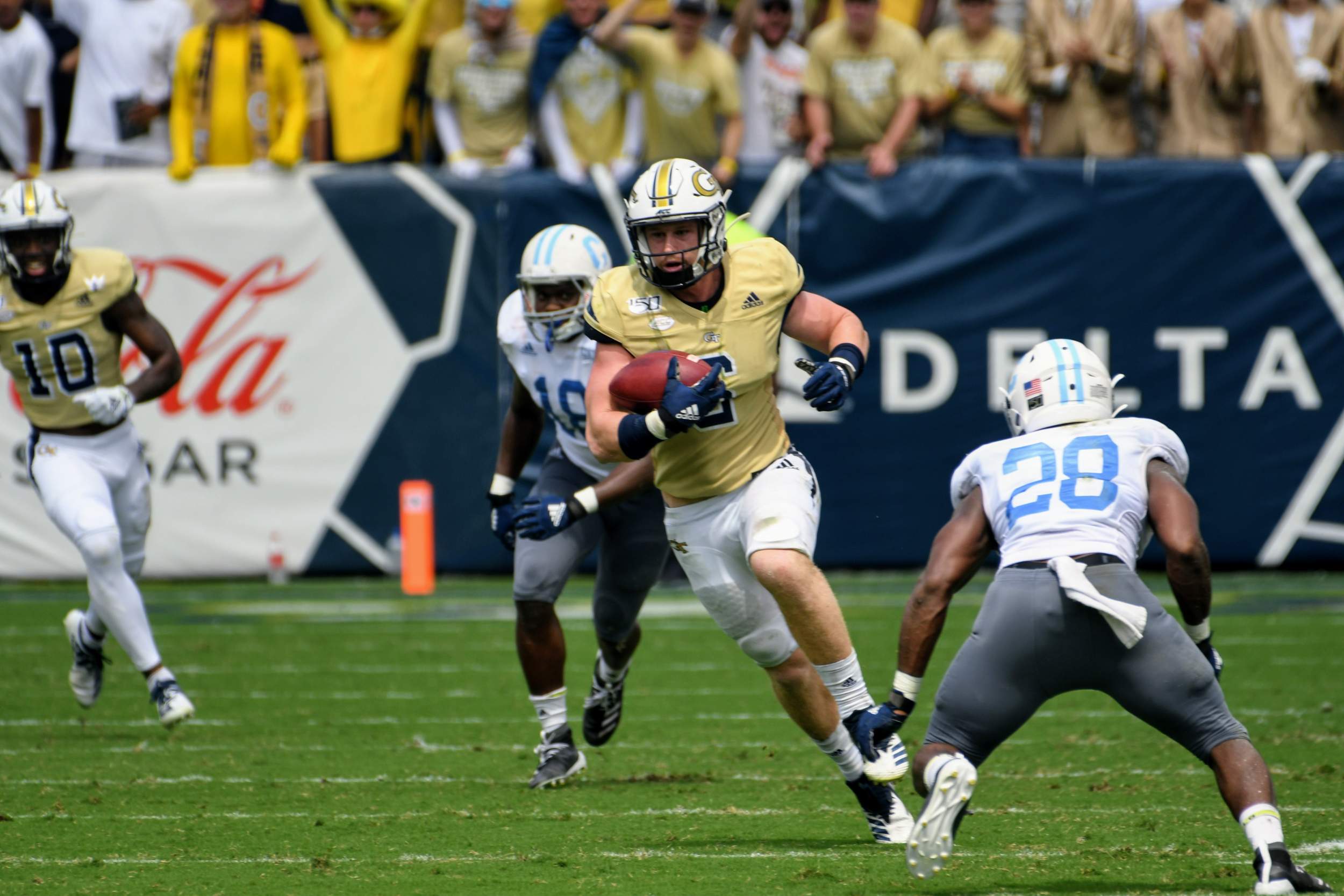 “It was a tremendous football game, I thought, played on both sides of the football, both Georgia tech and The Citadel. It was an outstanding effort. It certainly was a lot of fun out there. We had many opportunities out there to stay close in the game, and I thought that was important for us. We played excellent on defense. I thought our special teams let us down a little bit and gave them a couple of short yard situations for them, and unfortunately, they were able to get a couple of quick scores off of those. But other than that, I thought we played outstanding offensively and defensively.

“We controlled the ball, almost 41 minutes (41:50) of possession time. We had over 300 yards of rushing, which I think is a recipe for us in the triple option for us to be able to win football games and win football games like that.”

On what the win means for your program

“Overall it was an outstanding football game for us. Our kicker came through with a hell of a kick, even though he missed one earlier on in the day. He had the two final scores of the day to be able to win it for us. I’m proud of Jacob (Godek) and everything that he’s done. I’m proud of the way our quarterback (Brandon Rainey) played until he got injured. Hopefully we’ll get him back and we’ll have an opportunity there. We had some other Georgia guys who played extremely well, from A-backs in there blocking their butts off to the fullback, Clay Harris from Norcross.

“We’ve got a lot of things to build upon. We played two really good football games the last two weeks; we just came out on the wrong end. This is the team we thought we had back in August, and I thought we put it all together today.”

On the importance of the win personally

“I was the offensive coordinator and part of the South Carolina win, and I saw what kind of a boost it gave us, not only in recruiting, but it also gave us a boost when we walk into every single school, we had some sort of recognition about us. People know our logo. We’d been without that the last couple of years. We had played some pretty good teams pretty close. This was an excellent time for us to get this kind of a win. This is what we needed as a program, what I needed to get this program going in the right direction for the rest of this season, because we’ve got our whole conference schedule to play after this.”

On preparing for two quarterbacks

“It was very difficult – one that throws it a little bit better, and one that can certainly hurt you with his legs. We knew, being a triple option quarterback, you have to treat him like a triple option quarterback. That’s what he was recruited here to do. He’s a tremendous football athlete, and he did a tremendous job out there. It was extremely difficult for our defense just to be able to contain those guys. They do have some really good running backs out there, as well as their quarterbacks becoming running backs. I know they’re finding their way on offense a little bit. Offensive line-wise, I know they’ve mixed and matched a little bit. But I thought our defense was able to hang in there and hold them just as much as we possibly could.”

“We’ve got to evaluate those, but I don’t think we’ve got anything too significant. We had one particular play out there where Phil (Davis), our linebacker, went down. We’ve got to evaluate it and see what he’s got. Brandon (Rainey) went down with a knee, but I think should be OK. It looked like he was moving around all right. Hopefully we’ll be all right next week for our Charleston Southern game.”

On next week’s game against Charleston Southern

“It’s a good time to have a rivalry game for us. We had lost three straight to them until last year, so we’ve got a little bit of catching up to do. We just need to continue to do what we do. We’re not a special flashy football team. We just need to be the team we know that we are.”