“I thought the guys went out there and played really, really hard like they always do. They fought, they competed, we’ve just got to play much better situational football. I think you could feel it during the game, defensively we were playing really well on first and second down, creating tackles for loss, creating negative plays. But just the conversions on third down hurt us. They extended drives. And then conversely, not being able to continue drives [on offense].”

“The hallmark of our defense for the last six to eight years has been creating turnovers. For two straight weeks, we’ve only gotten one. So, we’ve got to emphasize creating turnovers, getting the ball and doing those kinds of things. Playing the kind of defense that we’re accustomed to and creating negative plays and turnovers.”

“In the second half offensively, [we had] 220 yards of offense and 22 points. We started to find a little bit of rhythm and had some explosive plays. The guys kept battling and cut it down in the fourth quarter and made it a really good game. The environment out there was really good; we were really happy our fans were engaged. Obviously, the guys on our sideline did a really good job staying positive, staying engaged and supporting each other. But just that drive at the end where I think they probably had two or three third-and-long conversions, we’ve just got to address that. We’ve got to fix it.”

“There is still a lot that he is going to clean up. It was his first game getting significant amounts of time and you could even see him grow and develop throughout the game. He’s got a live arm. A couple of them we had some things wired and just determining if the middle of the field was open or closed, where to go with the football. He had one down the sideline to Malachi [Carter] wired and just drifted a little bit out of bounds. So, just those kind of things, the growing pains for all of us with this transformation that we’re all going through. But I can’t discount how hard these guys are working, how dialed in they are as we’re building this thing. It hurts, but I think the attitude and the desire to improve is there. So, we’ll keep working and keep getting better.”

On building off of the success in the second half

“If you watch the entire game, the defense kept battling, and they were in some situations that weren’t ideal, but they just kept battling, they kept playing and they kept competing. As the entire development of this program goes forward, all of those signs of significant, marked improvement. I think they made everybody feel excited and energized about the future. But we’re worried about the present. We’ve got a game in seven days. So, just those incremental jumps, we want to make sure that we’re doing those at a high level.” 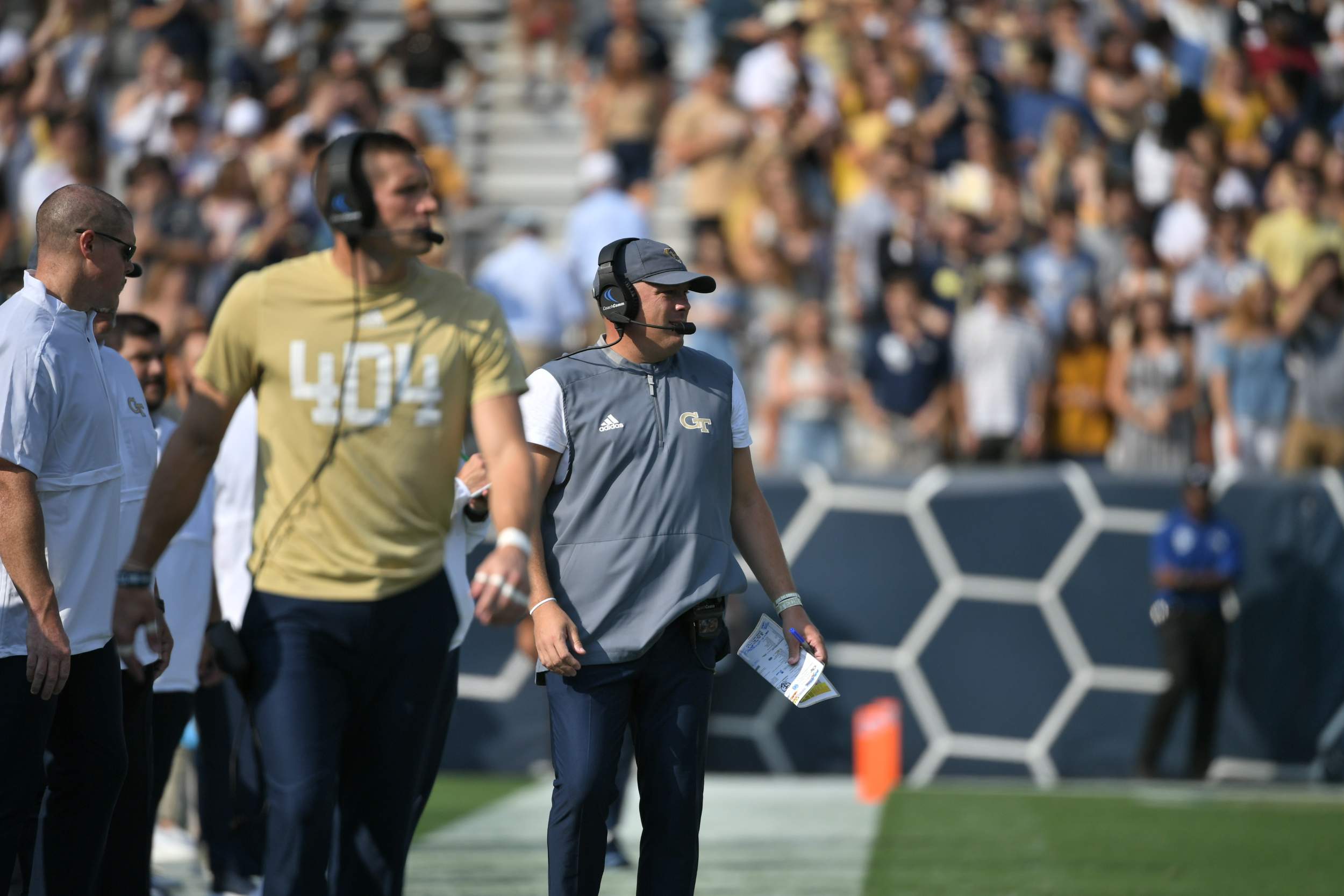 “I’m proud of our team; it’s been so hard to win here. After we spent so much energy last week against Clemson, earlier in the year we didn’t respond well after that and come back with the same energy. After two games where we spent a lot of energy with South Carolina and Miami, we didn’t play with as much passion against Wake Forest and Appalachian (State). So basically, this was a test for us to see if, after we spent so much energy against Clemson, we could come back and do it again. I thought they played hard tonight. They played with passion tonight, and did a lot of good things.

“The other thing is, we’ve won here once since I left. It’s been a really, really difficult place for us to win. So you combine the amount of times that we’ve struggled here with the fact that we didn’t respond with passion (in previous games) as well, and I’m really pleased with the way the guys played tonight, as hard as they played.

“(We had) a lot of mistakes on offense. We had some dropped balls. We had some penalties that we’ve got to clean up. Our defense played really, really well except for … they had two drives they gave up. One of them they had a lot of young guys in there. And the last one just shows you our lack of depth; they scored so fast. And I thought the kicking game was good.”

On the play of QB Sam Howell and the offense

“I thought Sam did a really good job. He overcame some third-and-longs, fourth-and-longs, and I’m really, really proud of his performance. He took care of the ball. Our running backs ran hard, Javonte (Williams) and Michael (Carter), and that just means our offensive line continues to get better.”

“I thought they did. But we made too many mistakes. We had too many penalties. You always have a couple of guys who say, ‘Coach, I didn’t do that.’ So you always go back and look at your penalties when you get back home, and see if guys missed it or they were truly penalties. We had some big penalties that really hurt us and cost us drives. So we’ve got to get rid of the penalties, and we’re still not forcing enough turnovers on defense. For some reason, we’re not getting strips at all. We got an interception tonight with a freshman, but we’ve got to force more turnovers to be able to win at the end.”

On whether this was Sam Howell’s best performance

“I think so. We’ll study it and see, but he’s got so much composure. And, three guys, at least, dropped balls early in the game that would have led to touchdowns, and we end up with three points instead of 14. He didn’t get a lot of help sometimes from his receivers. But they got better as the game went on.”

On Howell after having lead cut to 24-15, being stuffed on the kickoff and then the 87-yard drive

“He has a tremendous amount of confidence, and also he’s a gym rat, so he studies and knows exactly where things are, sometimes to a problem that he overthinks sometimes. But he’s got good confidence, and they believe in him. And I thought the offensive staff and Sam did a great job of taking four or five minutes off the clock when there was about nine minutes left, and basically the game was over at that time.”

On who sparked your team’s passion in practice

“I thought our defense was practicing pretty well. Our offense wasn’t, they weren’t as consistent.  But they came to play tonight and did a good job.” 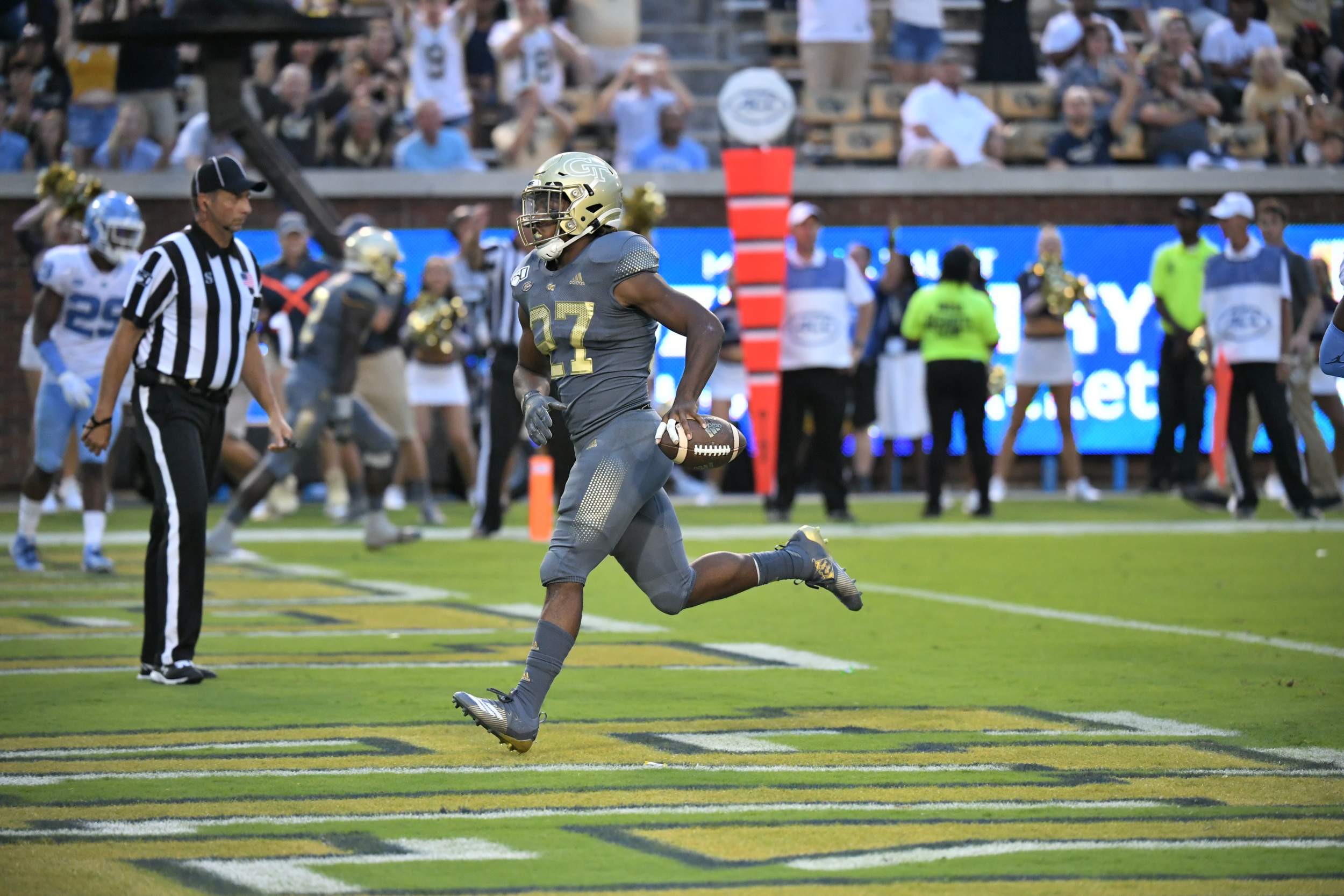 On the zone blitz concept and interception:

“It was a drop, I saw the ball coming and I knew I needed to make a play, a big play for my teammates. It was a good job on the DBs making sure he [UNC’s Sam Howell] could get the check so I could get the interception. Good job for the D-linemen for getting the rush and line backers. All the congratulations go to my teammates on that play. It was an awesome play by everybody.”

On the defensive vibes:

“On defense our vibe is always, whether the offense is moving the ball or not, is to always have that high morale. When the offense starts to move the ball we knew the guys would get in a groove, it was only a matter of time and when they did it brought a lot of juice to the side lines. We had to step up and do our job as a defense because they were doing their job as an offense. It is ultimately on the defense, always. We can create turnovers, get points and also stop the other team from getting points so ultimately the heap is on the defense.”

On the offense’s cohesion in the second half:

“We picked up the tempo a little bit. We started executing plays and taking what the defense gave us. It ended up pretty good.”

On getting more reps and playing most of the game:

“It felt good. I had a few reads I wish I could get back and a few throws that I should have made, but it felt pretty good overall coming out and starting.”

On the chemistry with the offense and receivers:

“It is exciting having guys like Malachi [Carter], AB [Ahmarean Brown], Adonicas [Sanders], TD [Tyler Davis] and even the backup tight ends came in a little bit to show what they can do. We are going to get better everyday at practice and the connection is going to get better. It is all just going to fall together.”

On the end zone catch for a touchdown:

“It felt great. We had been talking about it all week. Me and my boy James [Graham] just finally finding the connection and chemistry we have been looking for. I felt like that was really the first sign of what we could really do this season”

On the offense being more comfortable with each other:

“Oh definitely. We have a great receiving corp. and as you can see in the second half we started to pick it up a little bit, started to find out what we can do, how we can get down the field. We started to get more comfortable but its all going to come from working and getting more reps with James [Graham] starting so we can start off a lot faster than we did.”