“Good win for us. Coach [Fred] Hoiberg is one of the best coaches in the country and he’s going to get Nebraska going like he did at Iowa State, there’s no question about that. So we were fortunate with the win today. It was a little bit of an ugly game. Obviously, our identity is our defense. We defended well, played good D. The biggest thing is we had 16 turnovers. Now Khalid [Moore] and Michael Devoe combined with 10, so we’ve just got to be better in that area. But we found a way to get a win and we won through our defense. That’s who we are. And there’s just going to be some rough patches offensively as we all know until Jose [Alvarado] get back [from injury]. That’s just kind of the deal. It’s just going to be a grind out type of session with these games until Jose gets back and we’ll have a little better continuity and flow. But hey, bottom line is a win is a win. Every game guys have fought, they’ve competed, they’ve scrapped, they’ve played hard for us every possession defensively and that’s what we can control and that’s who we’ve got to be.”

On playing better in the second half:

“Yeah, we were better in the second half. And I thought in the first half we had some opportunities we just missed a lot of short shots, missed some layups around there and just didn’t get it done. But that’s a credit to Nebraska. But we eventually settled in and made some shots. We got down 26-22 but then we ended the half the right way, up four going into half. And then we came out in the second half and played well and was able to get a little breathing room and got a little lead there and was able to take it home.”

On if this was the best they’ve played defensively this year:

“I think we’ve been pretty good defensively. If you look at our numbers, I don’t know if it’s one of our best. It’s up there, but we’ve been pretty good defensively all year long. So, I don’t know if it’s our best defensive game, but one thing we’ve been good at has been defense this year. That’s the thing that has been a constant. And we’ve been good defensively all four years. It’s the one thing that we can control because it’s an effort. Defense is about how well you stunt, multiple efforts, multiple plays during a possession. You’re flying around like your hair is on fire type of mentality defensively. It’s a motor. You can’t be good defensively if you’re cool, casual or cute. Now offensively, when we turn it over, we play cool, casual and cute. It doesn’t work. But defensively, you just got to muck it up and have a grimy type of mentality and we do that, and that’s our identity. Now we have to carry that over on the offensive end. I’m not cool, I’m not casual, and I’m definitely not cute. So I don’t know why we play like that on offense a couple times on a few possessions. So, we’ve just got to clean that up.”

“I was really proud of Michael on his boards. I got on him at halftime that he wasn’t sticking his nose in there. I got on Bubba [Parham] one time because he leaked back. Guards have got to come up with the scrums. Guards have got to stick their nose in there and guard rebound. That is so important. Bubba, one time I was mad at him and I got on him because he leaked out when the ball was there and you have to get it. And Mike a couple times in the first half, he was just kind of watching and I jumped him and said, hey man, what are you doing? That’s just being cool, casual and cute. That doesn’t work on defense. It doesn’t ever work. And so get your nose in there, get your rear end in there and rebound the ball. And he had some big guard rebounds in the second half and ended up with eight total boards. So I was proud of Mike for that.” 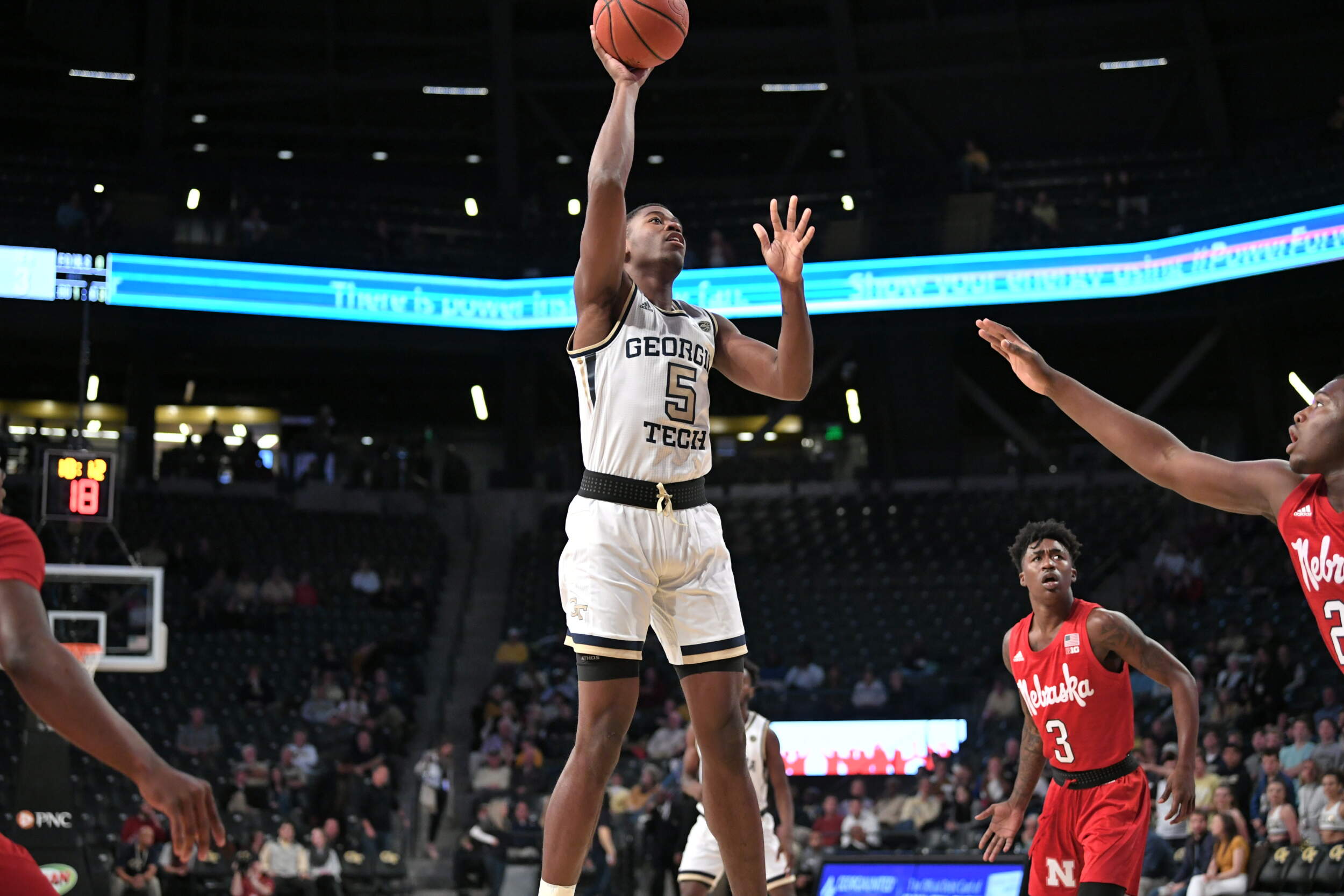 “We’ve actually been shooting the ball very well as of late. [In our] last four games, we’re almost 45 percent and making over nine per game. [We] didn’t get off to a good start knocking down shots. I thought our pace was really good early. I thought we were creating good shots, good opportunities…. getting to the rim. Then we went through a stretch where I didn’t think the movement was very good.

“Give Georgia Tech credit for finishing off the first half. We talk a lot about the importance about getting off to a good start and finishing off the half in both sessions. They did that. I think they went on a 10-2 run to get the momentum going into halftime. I thought our second-half movement was really, really good. We just did not convert. We had several opportunities and missed them at the rim. Then obviously the free-throw shooting didn’t help. Georgia Tech has something to do with that. You have [James] Banks, [the] No. 1 shot-blocker in the country, at the rim. He does a terrific job. We talked all week about driving to make a play for a teammate. [We talked about] trying to keep good spacing on the second side. Unfortunately, we couldn’t knock down enough shots tonight.

“A lot of things that happened out there are correctable for us. We had 11 turnovers in the first half and a lot of them [were] just inexcusable. We’ve done a good job all year of taking care of the basketball. We just gave them the ball on several occasions and that got them out in transition… got them confident. And the way they finished the half gave them the momentum and we never recovered from it.”

On the challenges of defending Michael Devoe:

“He plays with a great pace… He’s got a great hesitation move and obviously shoots the heck out of it… leading the nation in three-point shooting. [He] does a really good job drawing contact. A couple actions that they ran… the stack play we had a defense for it and didn’t execute it well. It got him loose and got him a couple of open shots and that can’t happen. Give them credit for getting him open looks. He’s a heck of a player.”

On playing in a road environment:

“[With] this group there’s a lot of firsts. This is the first opportunity to go out on the road and see how you respond when tough times hit which is going to happen every time you play on the road. I thought we got off to a really good start. I liked the energy… I didn’t think it was an energy issue, just too many turnovers. When you give the other team that many extra opportunities, it’s tough to win. I thought rebounding was better tonight. We took a step in the right direction there. They have a lot of really good offensive rebounders and we held our own with them tonight. When we do that that gets out in transition and that’s when we’re at our best. You have to find a way to bounce back. We play again in 72 hours. It’s going to be a mental day tomorrow [and] then we have to get back to work on Friday. We get another opportunity on the road against a great team and we’re going to have to play really good basketball, consistent basketball, if we want to have a chance to win that game.”

On the team’s three-point shot selection:

“They do a good job with that. It is a zone you don’t see very often. It’s a lot like when I was in the Big 12… like Baylor and their zone with their wings outside. It starts in a 1-3-1 and kind of morphs back into a 2-3. Then when you do get it inside you have to shoot it over the big fella, which is tough to do. I thought the movement for the most part in the second half was really good, especially seeing the zone for the first time. You try to simulate in practice, but it’s impossible to do. If you keep the ball moving and create good looks… hopefully we’ll make them the next time we get that opportunity.”