“I’m just really frustrated. I’m frustrated we didn’t play particularly well in the first half on offense, especially on some short yardage stuff. We couldn’t seem to convert. I had thought we made some good adjustments at halftime. We came out to start the second half with a horrendous special teams play that took the ball over to the 8-yard line and got it out of there pretty good. Then, we get a penalty and got behind with no choice but to punt. We flipped the field and put them down on the 5. They made two or three first downs, flipped the field and then put us on the 8. So, it was going to be one of those games. Then we took the ball back out to midfield and then laid it on the ground. Then third-and-whatever-it-was – 12, 15 – they hit us for a big play. They kicked it out of bounds the very first play we laid it on the ground. They score, they kick it off and we lay it on the kickoff return and pretty much the game’s out of reach. I thought we had cleaned that up, but clearly, we haven’t. There is a small margin of error, we can’t win games when we turn the ball over three times. We have stayed away from that [penalties] and today we didn’t do a very good job of that.”

On today’s offense versus prior games:

“We had some chances in the first half, and we couldn’t finish. We got into the secondary and we couldn’t get away. You have to give them [Duke] some credit. We didn’t finish any explosive plays or big plays. We have to do a better job, clearly, coaching ball security and that comes back to us. You can’t have the ball swinging when you’re in a crowd and have it on your hip. I feel like we try to stress it, but clearly we are not stressing it enough.”

“We played well after the first series. We had done some good things defensively, and then when the turnovers started, it’s like we went crazy there too. We got misaligned, and they hit the wheel route. We also turned a guy loose on third-and-12. The guy slipped, but the guy was beat by a mile when he fell down, or it looked like it to me from the sideline. You take the positives, and you try to grow from them. You correct it, and you go play. We can be a pretty good football team if we don’t turn the ball over and we don’t have penalties.”

On the preparation for this week’s game:

“I thought we had a decent week of practice. I’ll be honest, from week one to now the practice hasn’t been much different. The two weeks that we were really executing the practice was about the same as it was this week. I think sometimes when we start out and we don’t have immediate success on offense, the guys try to do too much. They don’t go with the flow and don’t go with the system and then it gets worse, as opposed to just kind of playing.”

On the opening series of the second half:

“It was 7-7 at halftime, and I told our guys ‘We are in great shape. We get the ball first to start the second half.’ I think, maybe other than one game, we have scored every time we had the first possession of the second half we have scored all year. Then we go out there and have a terrible kickoff return and a get penalty on top of that. We had their guy, if our guy didn’t jump because they [Duke] were trying to time the snap up and we jumped offsides. First-and-15 instead of first-and-5, we couldn’t overcome it, and we had to punt.”

On the adjustments made at halftime:

“There wasn’t a whole lot of adjustment, I mean they [Duke] lined up exactly like we knew they would, just like I’m sure they [Duke] could tell you we ran what they thought we would. I mean, when you play each other, that is what happens. We just did a very poor job of execution. You can’t turn people loose and create negative plays. It’s hard to play when it is second-and-12 or second-and-whatever. You have to try to get positive. We are a pretty good team if it is second-and-6, we can do that. In the first half, the thing that killed us was missing on the two short yardage situations. Normally, we are pretty good at that. I look back and it is very poor execution and I probably could’ve helped them with a better call.” 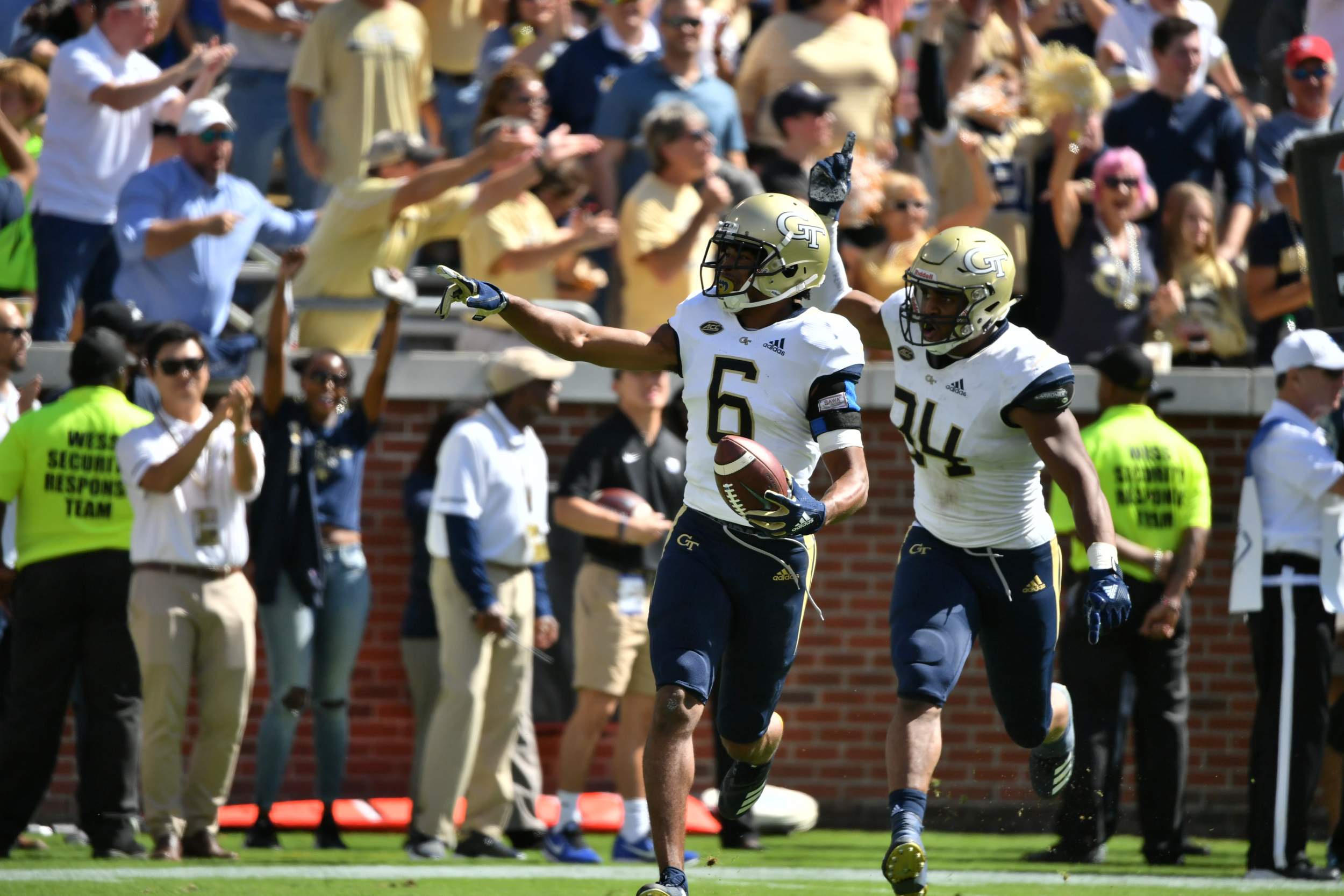 “I’m real proud of our team in a circumstance on the road for responding to different things that occurred during the game. In the first half, we contributed what I would call four turnovers. We turned the ball over on fourth-and-1, we turned the ball over twice and mishandled a punt to leave the ball back inside the 5-yard line. I thought we did respond to that defensively; we only gave up seven points.

“We turned around in the third quarter and did the same thing back. We created turnovers, and they were created. We responded offensively in a big way. We responded in the kicking game, creating our own turnover in that regard. [We had] great effort and great energy throughout this entire game. I would say our coaches responded well. There were adjustments that had to be made in all areas. Regardless of what Georgia Tech did on offense, and they did a lot of different things at times trying to find a spot to pick on, and our coaches responded well.

“Offensively, we made the decision to run the ball more effectively the second half, and we did. The numbers wouldn’t suggest that, but we did. We avoided many mistakes, sacks, things that were big plays for Georgia Tech in the first half, we were able to avoid those, and we continued to play well in the kicking game.

“It’s a big win, it’s a conference win, and it’s our first conference win. But we know we’ve got a lot of work lying right in front of us.”

On responding to the “chippiness” in the game:

“I thought we did fine. I can’t see on my sideline when something’s away. I saw what led to the start of the worst one. I don’t ever want to see players come off the sideline. I addressed it at halftime. Talking has never won a football game. It’s not who we are or what we do. The officials went in with a calmness and did the best job they could. We got an unsportsmanlike; they got a disqualification unsportsmanlike. We were better after halftime. I didn’t think it was near as bad in the second half.”

Comparing a similar situation that occurred in a 2017 loss to Army:

“In this case, it really didn’t give us yards. In that case, you gave up yards and kept drives alive. That’s a game that sits with every one of us in a certain spot that we’ll never like, but we learned a lot that day about our program. And we’ve won a lot of football games since that time. In that game, we didn’t do anything as well as we could. Hopefully, we continue to grow.”

On shutting down Georgia Tech’s offense:

“We’ve got good players on defense. We’re a good defensive football team. We have a systematic approach to playing an option offense. Believe it or not, we put this system in 11 years ago. We put it in the first spring, knowing that we had Georgia Tech every year in our division. We were playing Army and Navy multiple times on the schedule long-term. So we did a lot of research, a lot of work, talked to a lot of people. We’ve grown the system, but basically, we’ve got a playbook. We still work it in the spring. We try to make our players understand what the expectations are. There’s a whole bunch of guys in Durham, N.C., that I’m going to hug their neck, that had a lot to do with this. That’s how well they simulate Georgia Tech’s offense. They didn’t even make the trip; think about that. People forget those unsung heroes. Wow, did they do a job.”

On Georgia Tech DE Anree Saint-Amour’s performance in the first half:

“He’s a really good football player. He’s quick, he’s long. We thought going in that he was their best pass rusher. We just didn’t execute. We had some people get beat quick. He does great inside moves. When he beats you inside, he’s not very far away from your quarterback. We adjusted some things at halftime, we challenged out players. And I felt like we did a better job of managing him in the second half.” 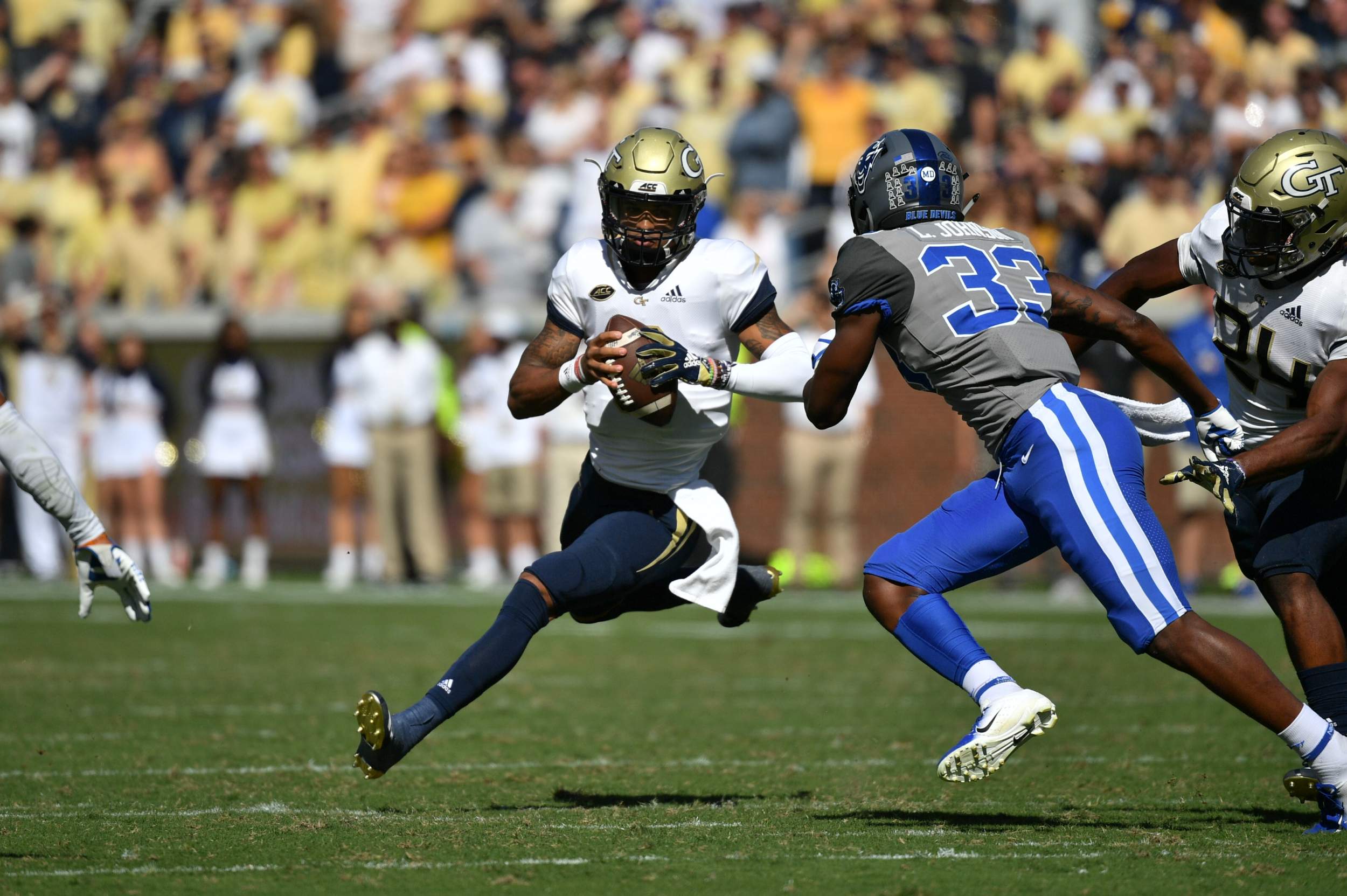 On how the fumbles from the offense affected the defense:

“As a defense, you always have to be ready to go out and get stops.”

On the key to getting to Duke’s quarterback and applying pressure in the backfield:

“Executing blitzes, being in the right place, winning one-on-one matchups was a big emphasis in practice this week.”

On the two sacks he recorded:

“The first one I ripped through the tackle who tried to block me, and on the second one, I went in and spun back out to get the quarterback.”

On his first career interception:

“It’s about time. It was a great feeling getting to celebrate with the defense.”

“Definitely not how we wanted our senior year to go, but you have to keep fighting and pushing through to win these next few games.”

On miscommunications with the offensive line:

“I got confused with some of the calls, but we should all know what we’re doing. There’s no excuse for that.”

On the frustration after struggling to move the ball:

“It’s something that we need to fix as a team. We had been doing well the past two days, we need to get back to basics and start over.”