THE FLATS –No. 17 Georgia Tech volleyball announced its 10-match schedule for the 2021 spring season on Monday. The schedule consists entirely of Atlantic Coast Conference matchups, including four home contests in O’Keefe Gymnasium. The spring portion of the Yellow Jackets’ 2020-21 slate opens on March 7 against Virginia in Pittsburgh, Pa. 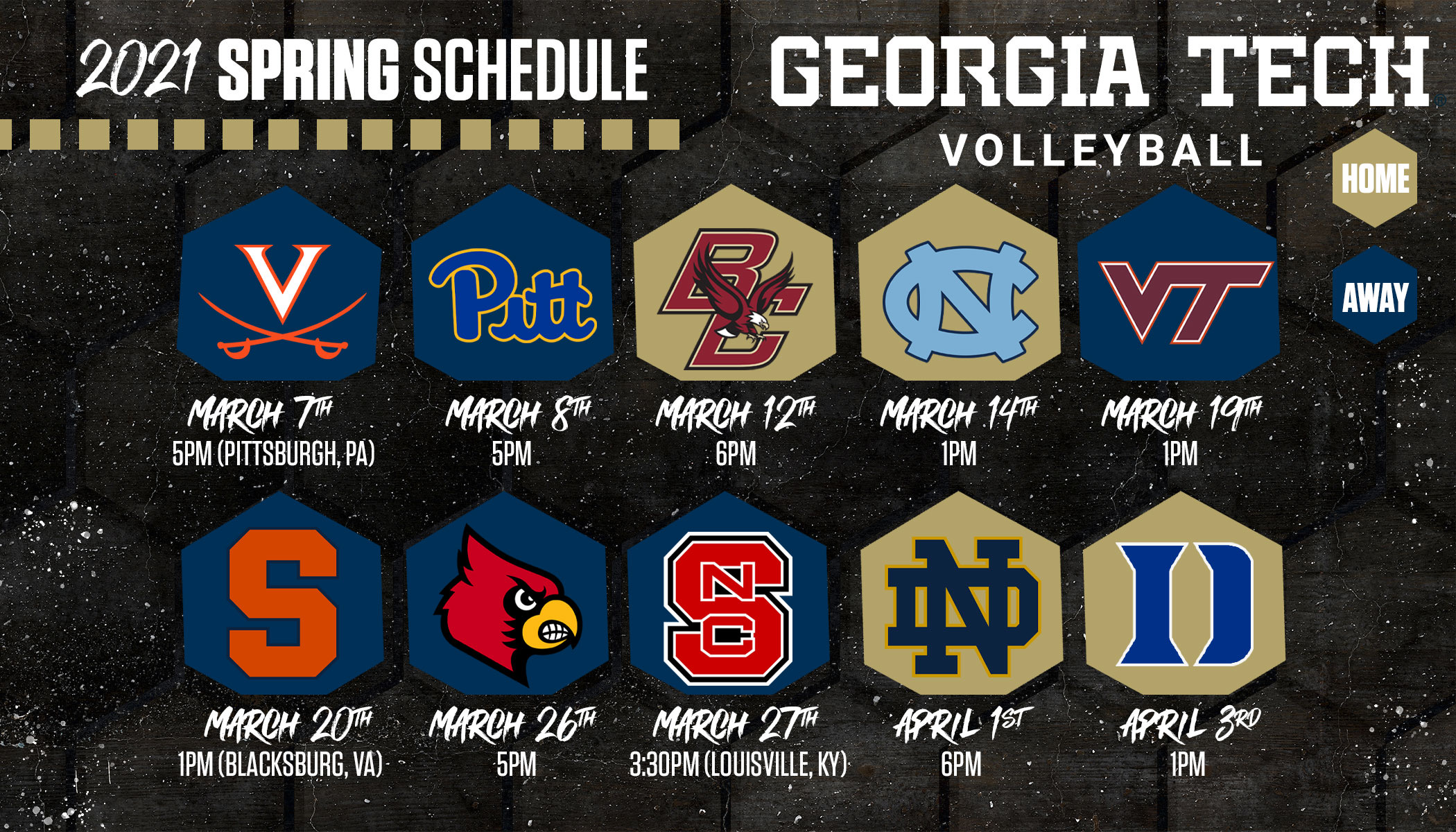 The ACC’s spring schedule will consist of five three-team pods competing at one site each weekend. Georgia Tech hosts pods on two of the five weekends of the season – March 12-14 (vs. Boston College at 6 p.m. and North Carolina at 1 p.m. in week two) and April 1-3 (vs. No. 15 Notre Dame at 6 p.m. and Duke at 2 p.m. to close the regular season).

Tech kicks off the spring season on the road in Pittsburgh, Pa. with matches against Virginia on March 7 at 5 p.m. and No. 20 Pitt on March 8 at 5 p.m. The next road action for the Yellow Jackets will be in Blacksburg, Va. on March 19 with a 1 p.m. matchup at Virginia Tech followed by a March 20 contest against Syracuse at 1 p.m. Georgia Tech wraps up road competition the following weekend in Louisville, Ky. facing off against No. 12 Louisville on March 26 at 5 p.m. and NC State on March 27 at 3:30 p.m.

The 2020-21 NCAA Tournament is slated to begin the week of April 4, culminating with the Final Four and national championship game on April 22 and 24 in Omaha, Neb. The 17th-ranked Yellow Jackets, who won the 2019 NIVC Championship, are seeking their first NCAA Tournament berth since 2009.

“We are grateful and looking forward to the opportunity to continue our season,” said coach Michelle Collier. “Our team is very proud of what it was able to accomplish this fall and has been working hard to continue to compete at a high level this spring. We can’t wait to be back in O’Keefe and continue to push towards our goals.”

The Jackets enter the spring season carrying over a 7-1 overall and conference record from the fall. After dropping a five-set nail biter at Miami in the season opener, the Yellow Jackets won seven-straight matches to close out the fall slate, including a stretch of five-straight sweeps over Florida State (twice), Wake Forest (twice) and Clemson. Dating back to 2019, Tech has won 25 of its last 27 matches.

As a team, Georgia Tech currently leads the ACC and is ranked ninth in the nation in hitting percentage (0.326). Individually, junior outside hitter Mariana Brambilla is currently tied for the nation’s lead in kills during a three-set match with 23 and ranks third in the ACC as well as 28th in the NCAA in points per set (5.02). Junior setter and reigning ACC Setter of the Year Matti McKissock is also among the nation’s best at her position, posting 10.76 assists per set to place third in the conference and 26th in the country.

Due to Covid-19 safety protocols, season and single-game tickets will not be sold for the 2021 spring slate. O’Keefe Gymnasium will operate at a reduced capacity, and face coverings will be required for everyone in attendance.

Select POINT TECH! Club donors, starting with the ace and attack levels, will have the opportunity to request complimentary season tickets for spring season. The rest of the fans in attendance will consist of students and player guests. Seating in O’Keefe Gymnasium will remain general admission. Seats will be available in clusters of two to allow for social distancing, and will be denoted by temporary chairback seating throughout the gym.

Additional details, including TV broadcast information, will be finalized in the near future.