PARKING INFORMATION – SATURDAY
Parking for this Saturday’s game is available in the Klaus Deck (E40) for $5. 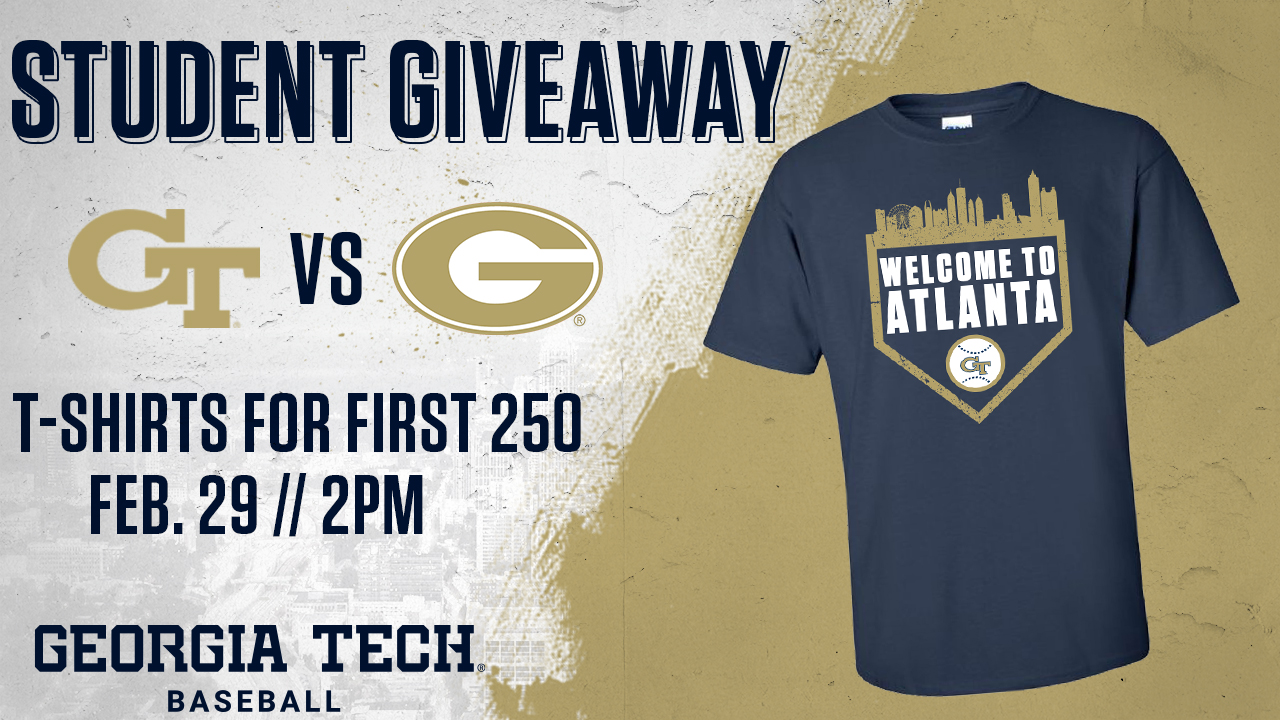 * The first 250 Georgia Tech students in attendance will receive a voucher for a free “Welcome to Atlanta” t-shirt upon scanning into the stadium at Gate 1 with a valid Buzzcard. Students can then claim their shirts on the first-base concourse at the top of the fifth inning. Limited to one per person, must present voucher and Buzzcard to receive shirt.

• The 17th-ranked Yellow Jackets will look to keep momentum rolling as they’ve outscored opponents 43-9 over its five-game winning streak.

• Georgia Tech will look to take the Clean, Old-Fashioned Hate series for the second year in a row after clinching last year at SunTrust Park in front of 18,000-plus – the largest regular season crowd in college baseball in 2019.

• This year, the series has been moved to a home-and-home and neutral site. Feb. 28 will be at Foley Field in Athens, Ga. (5 p.m.), Feb. 29 will be at Russ Chandler Stadium in Atlanta, Ga. (2 p.m.) and the finale will take place in Lawrenceville, Ga. at Coolray Field (2 p.m.) – home of the Atlanta Braves Triple-A affiliate, the Gwinnett Stripers.

• Junior Baron Radcliff earned ACC Co-Player of the Week honors for hitting .400 for the weekend with two home runs and seven RBI, reaching base .500 and slugging 1.000.

• At the plate, Michael Guldberg continued his assault offensively from a year ago, leading the ACC with a .593 average off 16 hits, four doubles and six RBI. He also one of just 15 D1 players to not strike out yet.

• Pitching continues to be debilitating to opponents.

• RHP Jonathan Hughes took over for Friday’s and worked to his second start, allowing just three earned runs over 5.2 IP, while striking out five.

• RHP Cort Roedig followed up with an electric performance, allowing just a hit and a run over 5.0 IP, while striking out six for the second-straight start.

• Freshman RHP Zach Maxwell also shined, allowing just a hit and his first run of the season, while punching out eight over 5.0 IP for his first decision win.

• Smith has worked 6.1 innings of scoreless baseball to start his collegiate career, proving himself one of the best middle-inning relievers in the ACC.

• Archer has gone 2-for-2 on saves and appearances. After a career-long four-inning save, punching out a career-high seven batters, he went on to earn a six-out save against Ohio State.