THE FLATS – Discounts for season-ticket holders, an expansion of the stadium footprint and the introduction of the Tailgate At Wreckfest highlight many new features that Georgia Tech football fans will experience at Bobby Dodd Stadium this fall. 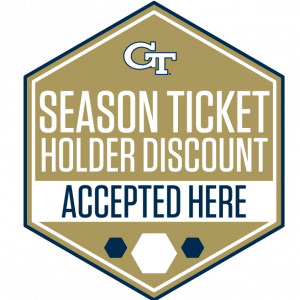 In an effort to alleviate congestion at entry gates and concession lines, Georgia Tech has expanded the footprint of Bobby Dodd Stadium into Techwood Drive on the stadium’s east side. The expanded footprint will include new entry points for Gates 8 and 9.

THE TAILGATE AT WRECKFEST

Space is limited, but spots are still available for Saturday’s season opener versus Alcorn State for just $25 per person (game ticket not included). Click HERE to secure a spot.

In an effort to address some concerns from fans, Georgia Tech athletics has made some modifications to the clear bag policy that was introduced at all GT athletics venues this year. Modifications include:

Zippers on Chairbacks/Seat Cushions – Portable chairbacks and seat cushions with zippers are permitted inside Bobby Dodd Stadium, as long as the purpose of the zipper is to hold a cushion in place. Chairbacks/seat cushions cannot have zip-up pockets or compartments.

Water Bottles – Any reasonably sized water bottles (up to a half gallon) that are clear, plastic and empty are permitted inside Bobby Dodd Stadium and can be filled at any of the new water-bottle filling stations located throughout the stadium. Commercial water bottles (e.g. an empty Dasani bottle) are permitted. Of course, water bottles provided to season-ticket account holders are also permitted and serve as a great example of one of the types of bottles that can be brought into the stadium.

Medical Items – Fans with medically necessary items can enter the stadium at any gate. All items will be inspected by a gate supervisor.

As a reminder, as part of the clear bag policy, fans (including season-ticket holders) are not permitted to bring outside food or drinks into Bobby Dodd Stadium.

Georgia Tech’s clear bag policy was implemented as a result of recommendations from security experts, with the purpose of making Bobby Dodd Stadium a safe environment for everyone in attendance while also expediting entry into the stadium as much as possible.