The Yellow Jackets’ women’s swim crew had eight individuals qualify for finals, while the diving squad was the only team to qualify two student-athletes for finals in the platform event.

“This was by far our women’s best Friday performance at ACCs,” said Toni M. and Richard L. Bergmark Swimming & Diving Head Coach Courtney Shealy Hart. “Our divers finished strong and we had a lot of great swims tonight in finals. The night was capped off by a school record setting performance by McKenzie Campbell in the 400 IM. We are looking forward to getting back in the pool tomorrow morning to finish strong.”

Campbell, a sophomore from Greensboro, had a historic day as she set a new school record in the 400 IM clocking in at 4:12.02, earning an NCAA B cut in the process. Her time was good for first in the B Final and contributed 20 points to Techs’ total. 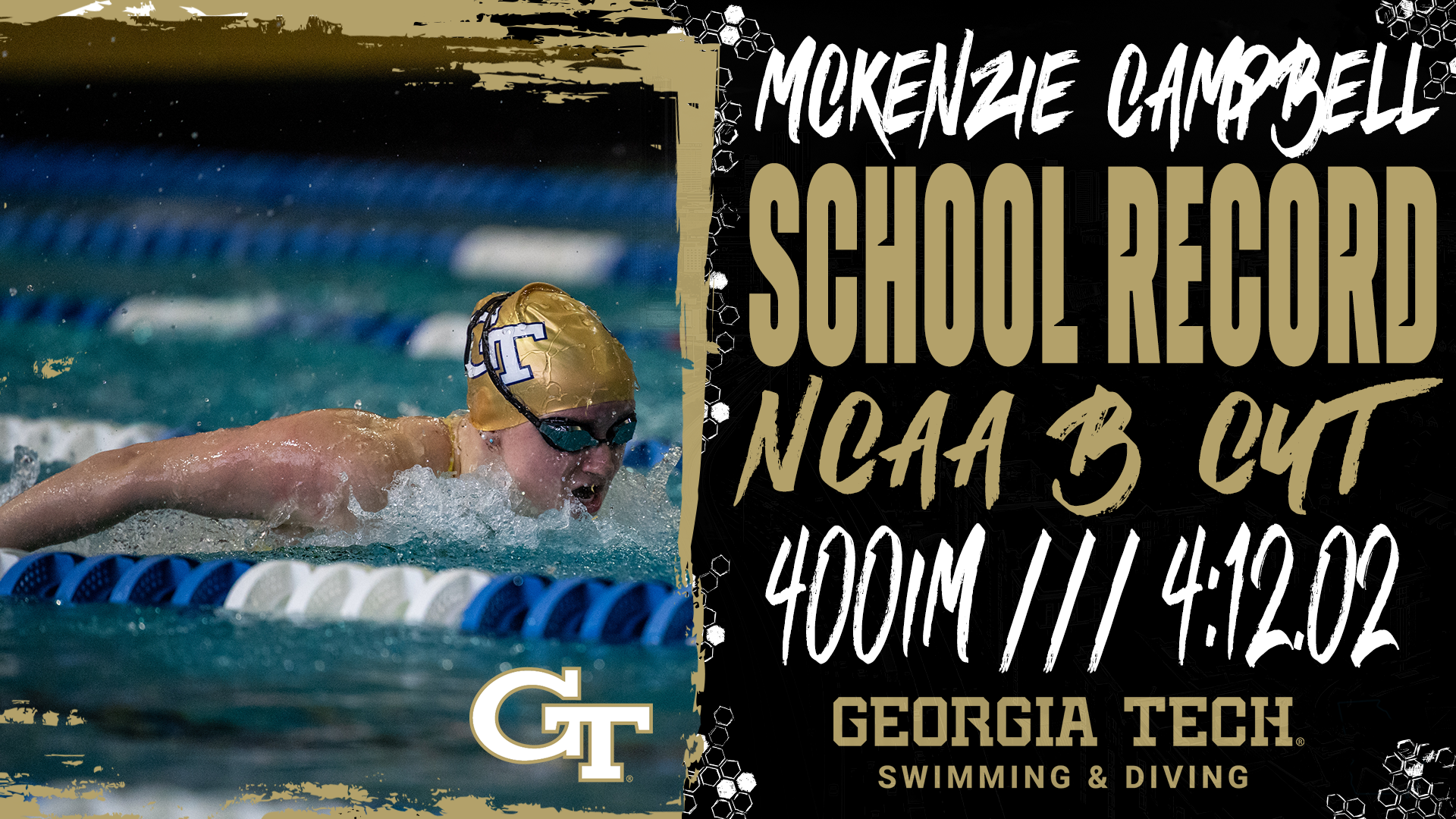 Fellow sophomore Brooke Switzer also had a big night as she took fifth in the 200 free touching the wall at 1:46.36, adding 25 points for the Jackets on the team leaderboard. Switzers’ fifth-place showing is the highest individual finish at for the women’s swim squad at ACCs since Karen Siebner finished fifth in the 100 fly in 2012. Switzer was joined by freshman Arianna Sakellaris in the 200 free finals, with Sakellaris placing 14th at a mark of 1:47.92.

On the diving end of things, senior Camryn Hidalgo and freshman Anna Bradescu both punched tickets to the platform event finals. Hidalgo finished fourth with 287.20 points and Bradescu tallied 286.30 points to finish fifth. Carmen Woodruff also scored some points for Tech as she had an 11th-place performance in the platform event.

Freshman Claudia Butterfield and junior Nicole Williams clinched finals spots in the 100 breast taking 21st– and 22nd-place, respectively, combining to garner seven additional points for Tech. Both Butterfield (1:01.78) and Williams (1:01.82) earned NCAA B cuts in the 100 breast during the preliminary round. Junior Jami Williams was Techs’ last individual finalist to bring in a point for the Yellow Jackets with a time of 54.80 in the 100 back, giving her a 24th-place finish.

In the 400 medley relay senior Grace Mauldin teamed up with Butterfield, Campbell and Switzer to finish in eighth-place at 3:39.72, bringing in 44 more points.

Heading into the final day of ACCs Tech is in ninth-place on the team leaderboard with 324 points.

Tomorrow the women’s swimming squad will take on the 200 back, 100 free, 200 breast, 200 fly and 400 free relay, while the men’s diving squad faces the platform event to close out ACCs.

The entirety of the 2021 ACC Swimming & Diving Championships will be broadcast on ACC Network Extra.