Greensboro, N.C. – Georgia Tech’s Moses Wright was named Atlantic Coast Conference Player of the Year and earned a spot on the All-ACC first team, and Jose Alvarado was voted the ACC’s Defensive Player of the Year and a second-team All-ACC honoree Monday by a vote of the ACC panel of media and coaches, highlighting the list of honors awarded to Yellow Jacket players following the team’s run to a fourth-place finish in the ACC.

Wright becomes the third Yellow Jacket to be named the conference’s top player. Mark Price was named by the Associated Press in 1985, and Dennis Scott was honored in 1990 by the Atlantic Coast Sportswriters Association, whose selections are recognized as the official team. Alvarado is the second Tech player to earn Defensive Player of the Year honors, following center Ben Lammers in 2017.

A native of Raleigh, N.C., Wright is the first Tech player to make the All-ACC first team since center Alvin Jones in 2001, and was the overall leading vote-getter in the balloting by the panel. Alvarado, a 6-foot senior, made the second team after being voted to the third-team in 2020. Junior guard Michael Devoe (Orlando, Fla.), who ranks high in the ACC in scoring (15.0 ppg) and three-point shooting (38.8 pct.), received honorable mention for the second year in a row, 16th in overall points received.

Wright, who ranks third in the ACC in scoring (18.0 ppg), rebounding (8.1 rpg) and field goal percentage (.544) and is among the top eight in four other categories, won the Player of the Year voting by a landslide, receiving 33 of 76 possible votes, 20 more than second-place Carlik Jones of Louisville and Justin Champagnie of Pitt. Only eight Division I players since 1992-93 (and only one from a power conference program) have matched the averages that Wright has produced this season in the five categories of scoring, rebounding, assists (2.3 pg), blocked shots (1.6 pg) and steals (1.5 pg). He has logged seven double-doubles in points and rebounds, six of those in ACC games, and 10 games of 20 or more points.

Alvarado, the ACC leader in steals by a wide margin and author of some stout defensive efforts against some of the ACC’s top scorers, captured 35 of the 76 possible votes, out-distancing conference blocked-shot artists Jay Huff of Virginia and Manny Bates of NC State. Known on campus as the “Brooklyn Burglar,” Alvarado has averaged 3.1 steals per game in conference play this season, 2.9 in all games, and is on course to lead the ACC in steals for the second straight year, something not done since Chris Paul in 2004 and 2005. He also ranks among the ACC’s top 10 in scoring (15.5 ppg), field goal percentage (.512), free throw percentage (No. 1 at .881), assists (4.2) and assist/turnover ratio (1.96). 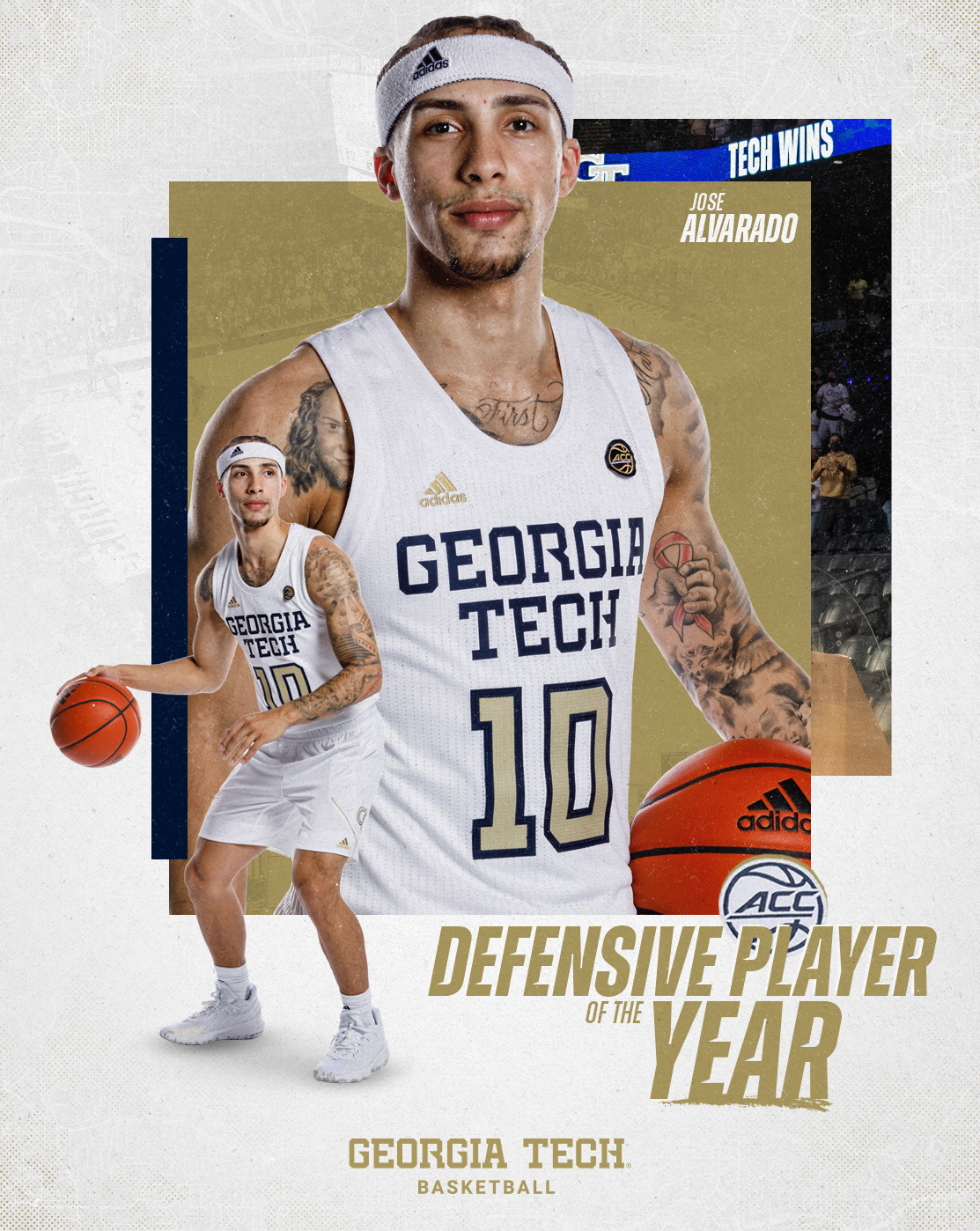 Further, Alvarado and Wright both were named to the ACC All-Defensive Team, the first time Tech has placed two individuals on that unit. Alvarado led the voting for that team, being named on 69 of 76 ballots. Besides Alvarado holding a wide conference lead in steals, Wright has ranked in or near the top five in both steals and blocked shots. Their efforts have lifted Tech to the top of the ACC in turnovers forced in conference games, and No. 2 by a scant .02 per game overall.

Those performances helped Tech, projected to finish ninth in the preseason, earn its highest conference finish since 2004 with an 11-6 record in ACC play, and a 15-8 mark overall. The Yellow Jackets’ 11 ACC wins this season matched their 2019-20 total, and their 11-6 mark by percentage (61.1 pct.) is the fourth-best in team history. Head coach Josh Pastner came in third in the ACC Coach of the Year voting.

The Jackets begin their quest for an ACC championship Thursday at 2:30 p.m. with a quarterfinal contest against either Clemson, Pittsburgh or Miami at the Greensboro Coliseum. 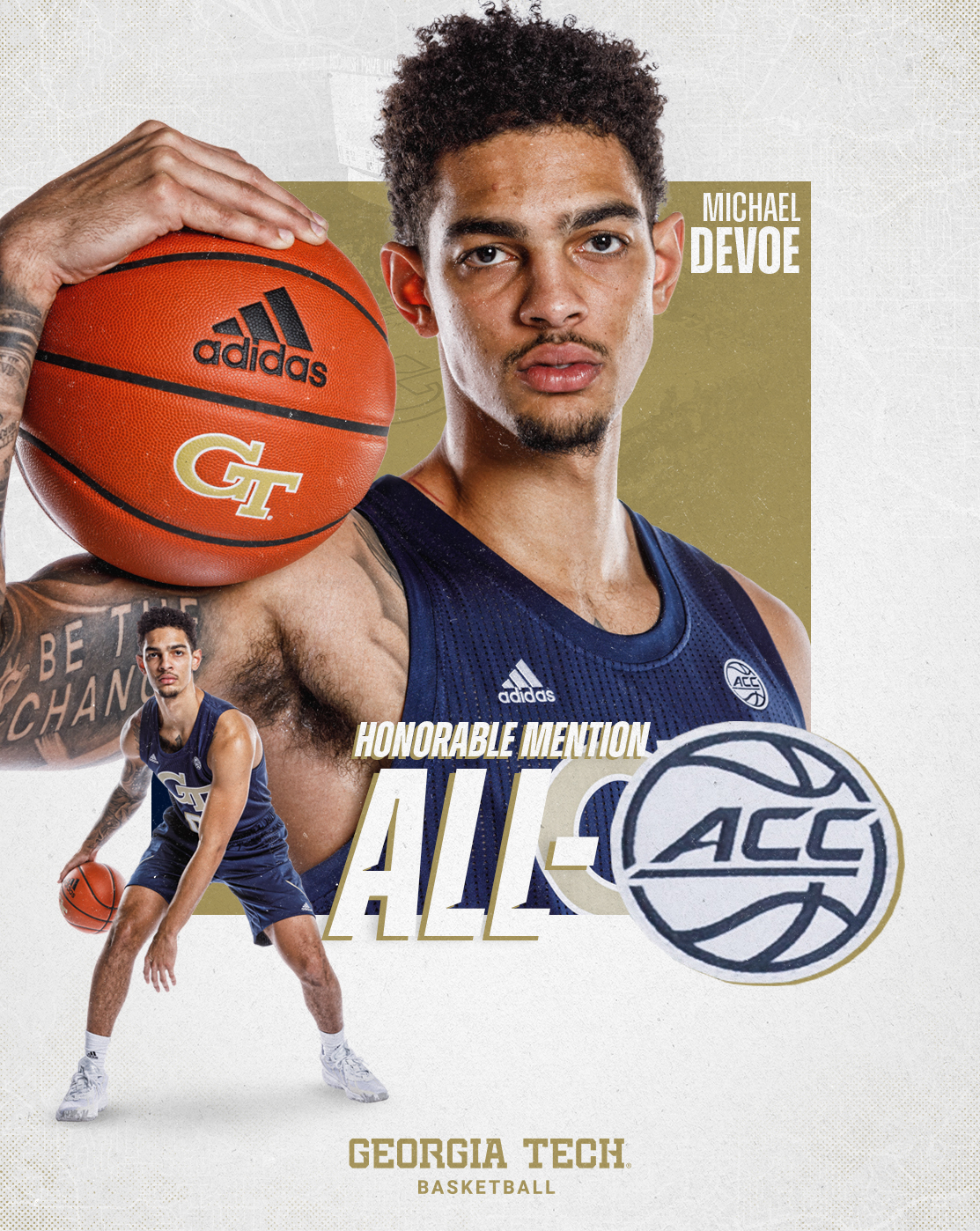