Lechuga Dives to Silver Medal on Day 2 of ACCSD

GREENSBORO, N.C. – Georgia Tech freshman diver Ruben Lechuga grabbed swimming and diving its second medal of the week when he finished second on the 1-meter board with a score of 342.50 on day two of the ACC Championships at the Greensboro Aquatic Center.

“I continue to be thrilled with our divers as Ruben podiumed in the 1-meter and Cami finished fifth in the 3-meter,” said Toni M. and Richard L. Bergmark swimming and diving head coach Courtney Shealy Hart. “For our swimmers, I’m also very proud of the fight that both Emily and Kristen showed today in the 500 free and 200 IM, respectively, as well the overall team performance by our 200 free relay swimmers as we got a season-best time. Our effort so far has been great and I look forward to us coming out aggressively both on the boards and in the pool tomorrow for day three.”

Coming off an ACC Champion performance on the 1-meter on Wednesday, junior Camryn Hidalgo just missed the podium with a fifth-place finish in the finals of the 3-meter, scoring a 309.30.

The Yellow Jacket team of Caroline Lee, Grace Mauldin, Catriona MacGregor and Allie Paschal turned in a season-best 200 free relay time of 1:32.02, which ranks as the seventh-fastest time in school history.

Individually, senior Emily Ilgenfritz made the B final of the 500 free before finishing with an NCAA B qualifying time of 4:45.51 to finish 11th overall. Then in the 200 IM, senior Kristen Hepler swam a season-best 2:00.49 to make the C final, where she finished eighth (24th overall).

Georgia Tech returns to the pool as well as the men’s platform, beginning with prelims at 10 a.m. and finals at 5 p.m. Finals will be streamed live on ACC Network Extra.

ACC Network Extra (ACCNX) programming is available online via the ESPN app or WatchESPN.com. Viewers must subscribe to a cable/satellite/digital provider that carries the ACC Network to view ACCNX programming. 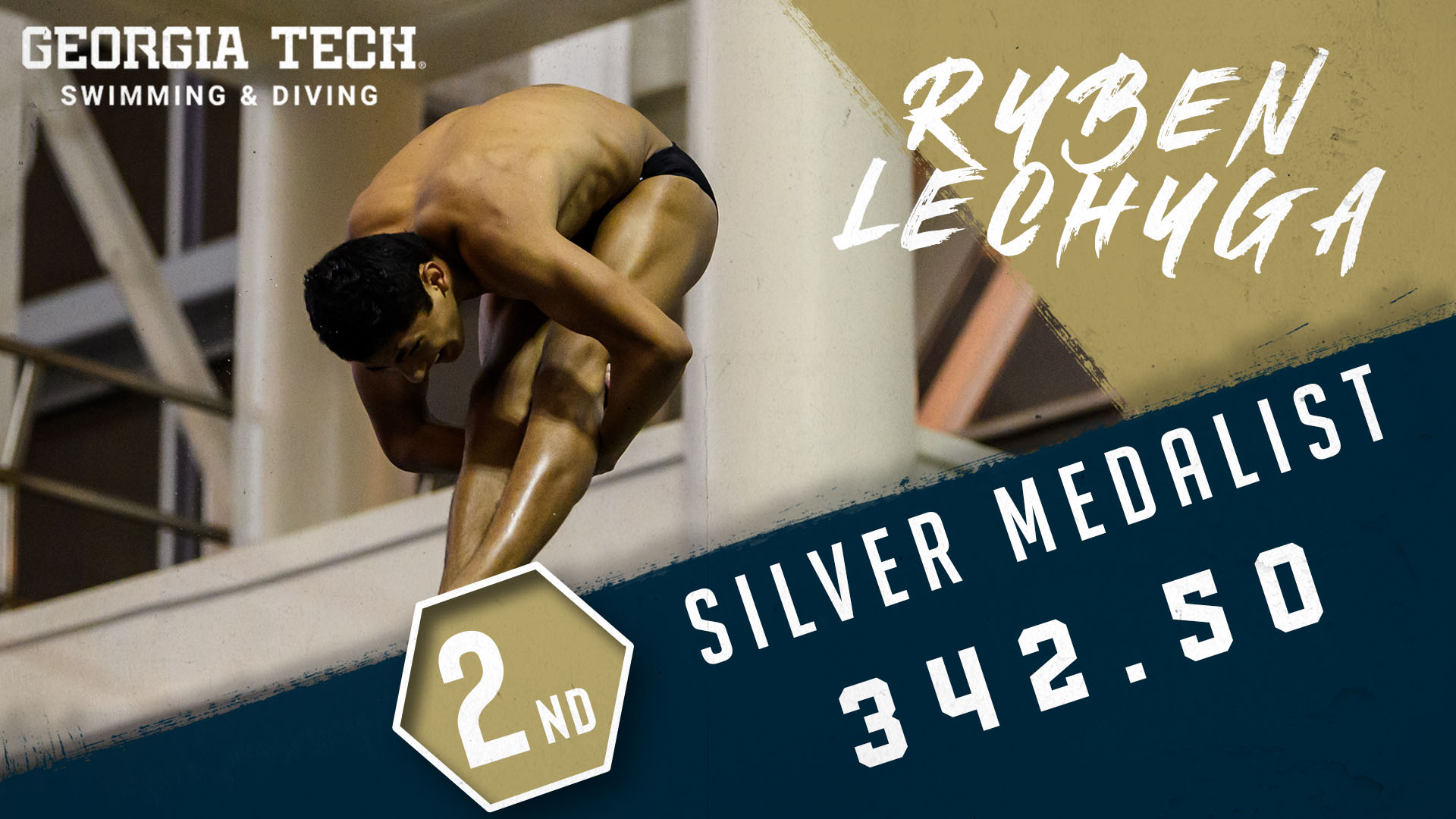 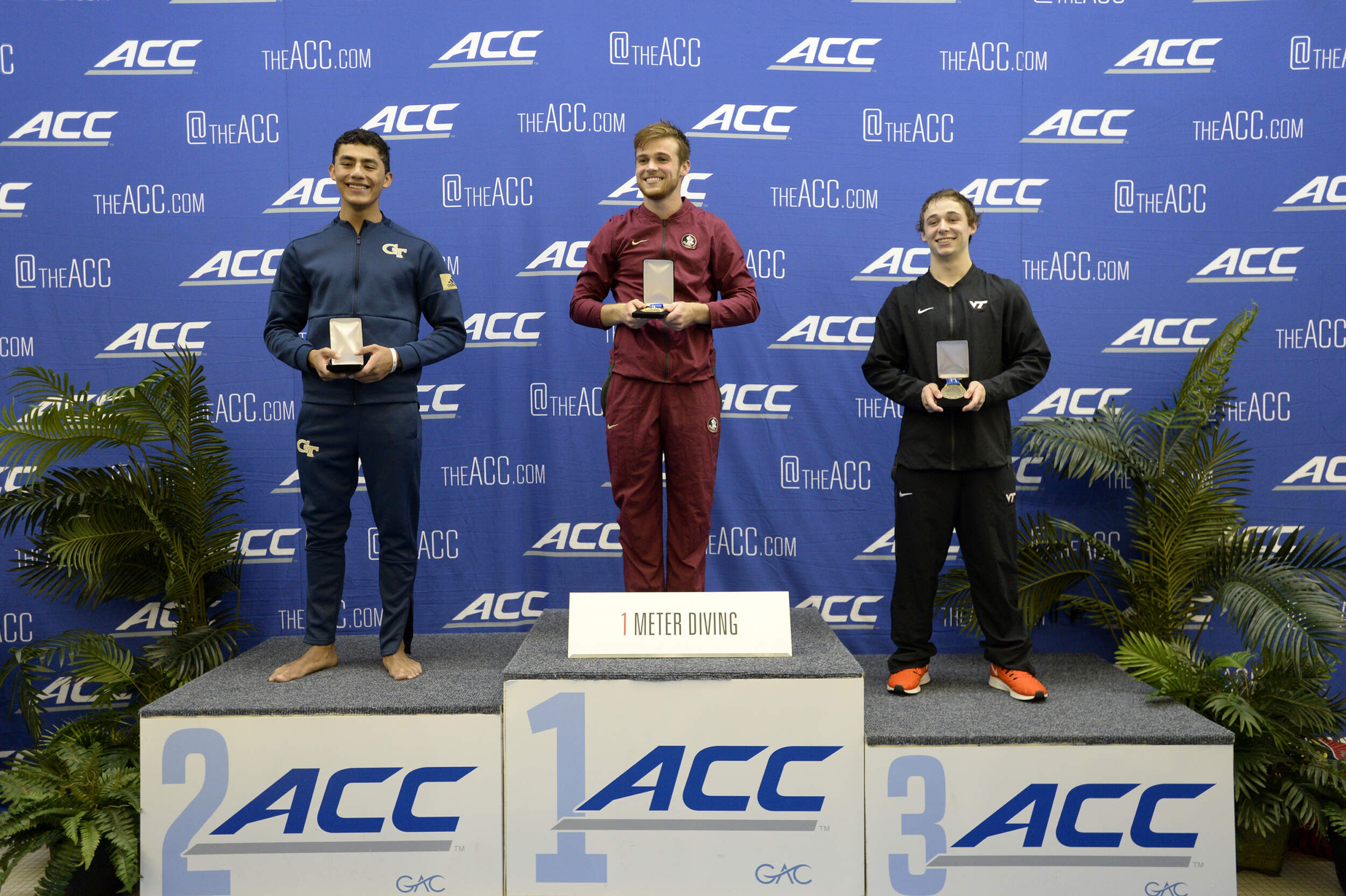 On the diving team’s approach to meets:

“This team has been the most positive group we have had as far as the way that they approach meets. They support each other and, while our team has always been good at that, they do a great job at staying positive throughout our long season. We have dealt with a few injuries and setbacks, but, they haven’t let that kind of stuff bother them. As a group they really pulled together and did what they needed to do.”

On the diving team’s overall performance on day two:

“After Ruben’s performance on day one, he did a great job of dealing with his nerves and not giving in to the pressure. Our group has already learned how to deal with adversity. They enjoy what they do and do not put too much pressure on themselves. They focus on each dive and focus on the moment. When something does not go right they just get past it and are able to bounce back. Tomorrow is platform and it is a good event for

On Ruben Lechuga’s ability to bounce back on day two:

“Each athlete is different. Ruben is so talented. He puts a lot of pressure on himself. After the first day, I told him we were lucky to have him here and we do not hold poor performances against people. This is a process. The fact that he does care so much about his performance is awesome.”

On making it to finals as a freshman:

“It felt great to make it to the finals today. That was my goal entering the day. Once I made it there, whatever happened I was just happy to be there. I knew after my preliminary performance that I could do something in the finals. I focused on what went wrong in prelims and adjusted accordingly. I am ready for tomorrow and look forward to getting to compete with my team again.”