Tech Back on the Road to Face No. 25 Louisville

Louisville, Ky. – Back on the road for the third time in four games, Georgia Tech looks to build on an important win over No. 16 Florida State with a 2 p.m. Atlantic Coast Conference matinee Monday against No. 25/23 Louisville at the KFC Yum! Center.

The Yellow Jackets (8-5, 4-3 ACC) sit in seventh place in the ACC standings and a NCAA NET ranking of No. 55 following Saturday’s 76-65 homecourt win over the Seminoles, which kept the Jackets unbeaten at home in ACC games. The win followed a pair of close losses at No. 13 Virginia (64-62) and Duke (75-68) in which they led late, and Tech is looking for its first ACC win on the road. Prior to that, the Jackets had won three straight conference games, including No. 20 Clemson, Wake Forest and North Carolina by an average of 13 points. Tech remains one of the ACC’s highest scoring teams – third at 77.69 points per game overall.

The homestanding Cardinals (10-4, 5-3 ACC), who had a weekend bye, hold fifth place in the ACC following their 54-50 loss Wednesday at Clemson. After a 9-1 start this season, Louisville has dropped three of its last four, the lone win coming at home against Duke (70-65) last Saturday. The Cardinals lost at Miami and Clemson and at home to Florida State.

Monday’s game will be televised nationally on the ACC Network and will be streamed live on the ESPN app. Radio coverage is provided by the Georgia Tech Sports Network by Learfield IMG College, with flagship station WCNN-Radio (680 AM, 93.7 FM) in Atlanta. The Tech broadcast can be heard on SiriusXM Ch. 380 (internet 970) and the TuneIn app.

“This is not a shock to me. This is what I came here to do.”

Jose Alvarado checked in with @TheAndyKatz after @GTMBB took down No. 16 Florida State. pic.twitter.com/2fLogYuEI3

Of the four most recent newcomers of the expanded ACC, Tech has the longest history with Louisville, meeting 28 times prior to the Cardinals joining the conference … Louisville won the first seven games between the two teams as ACC brethren before Tech broke through with a 64-58 home win over the Cardinals in the second meeting of the 2019-20 season. It snapped a nine-game losing skid in the series that dated back to 1999. The teams split their two meetings in 2019-20, Louisville escaping with a 68-64 win in the teams’ first meeting at the KFC Yum! Center. 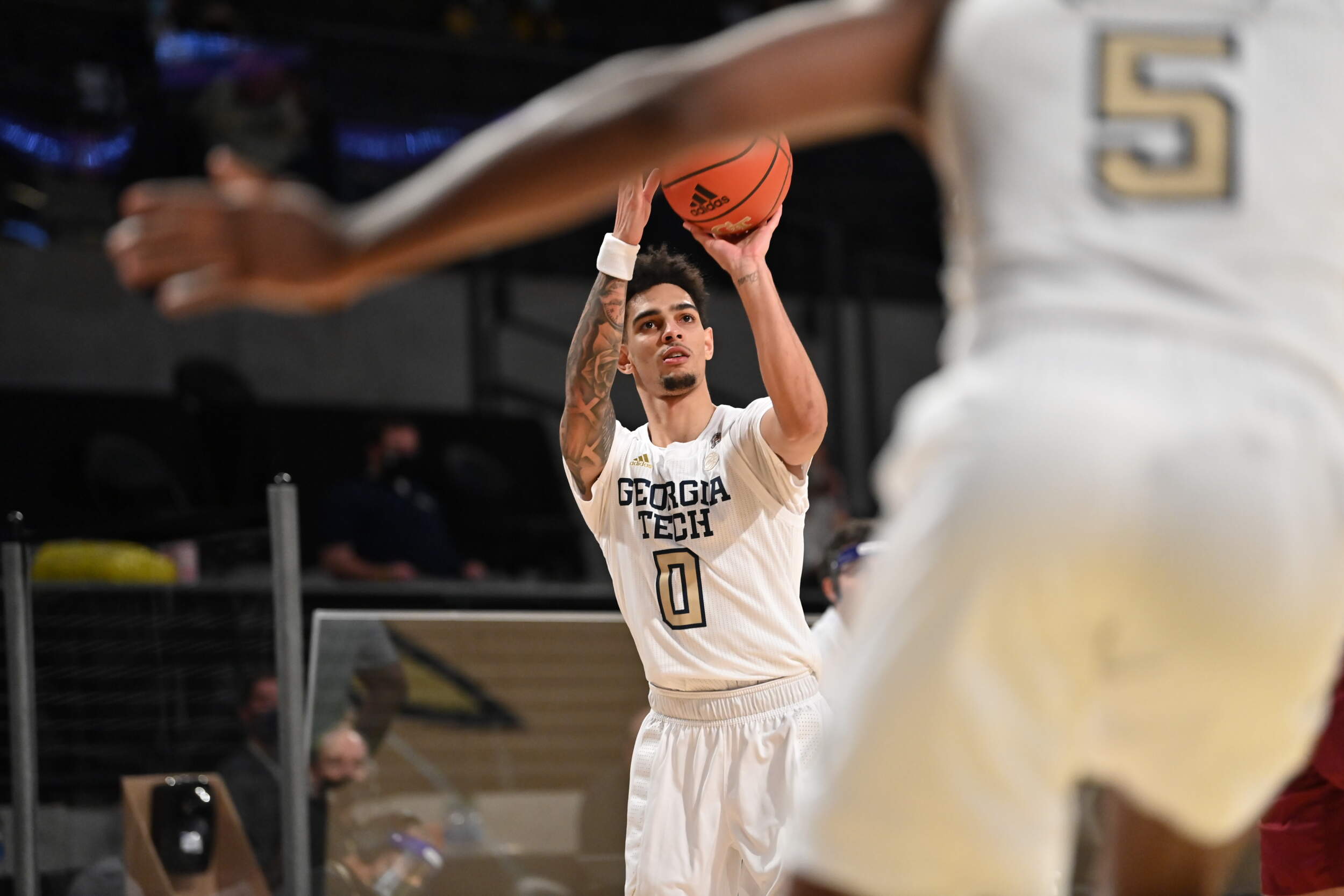 Michael Devoe is averaging 15.1 points and hitting 46.5 percent of his threes in ACC games. (photo by Danny Karnik)