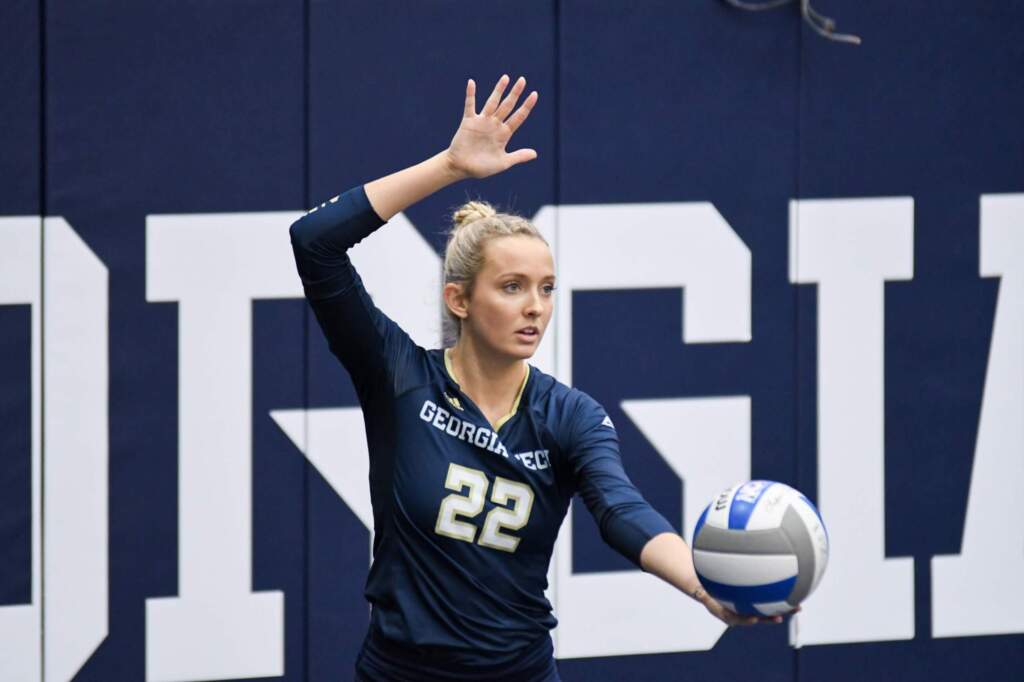 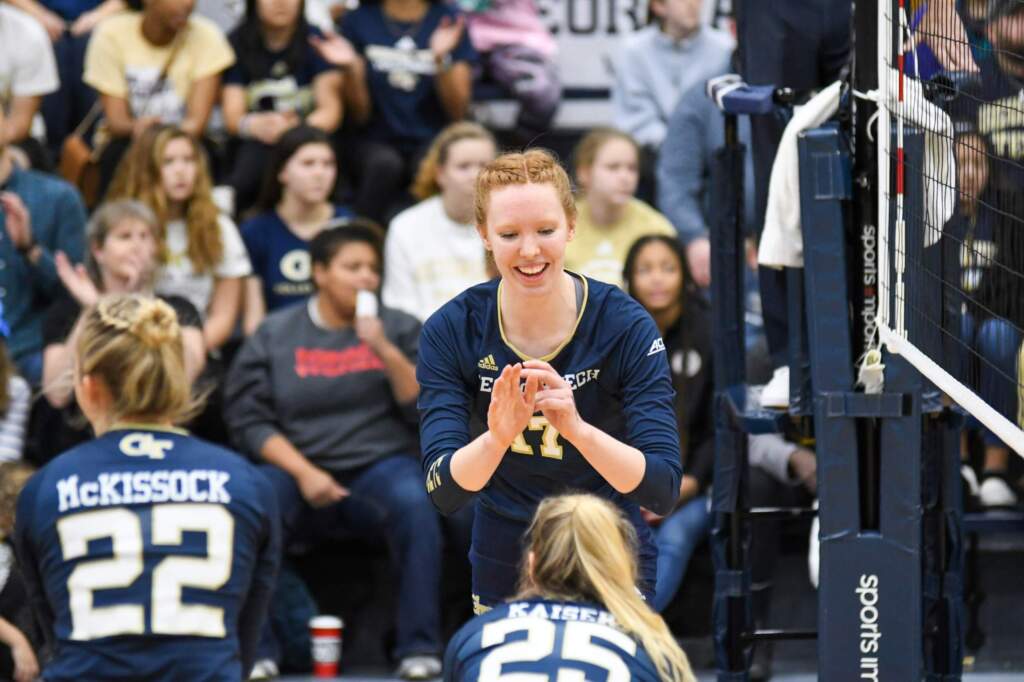 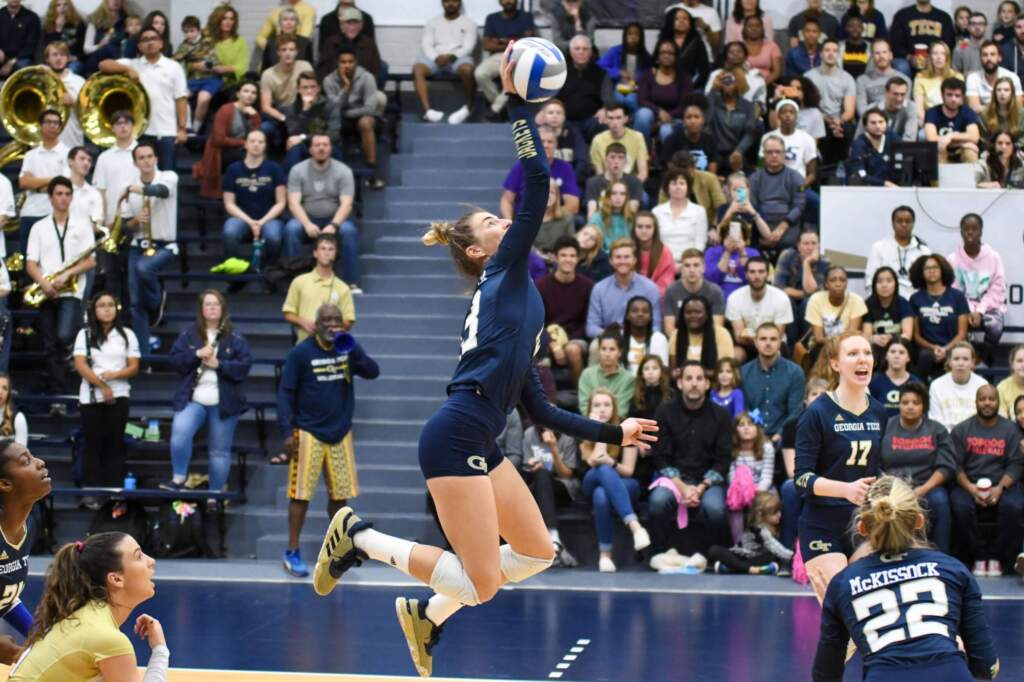 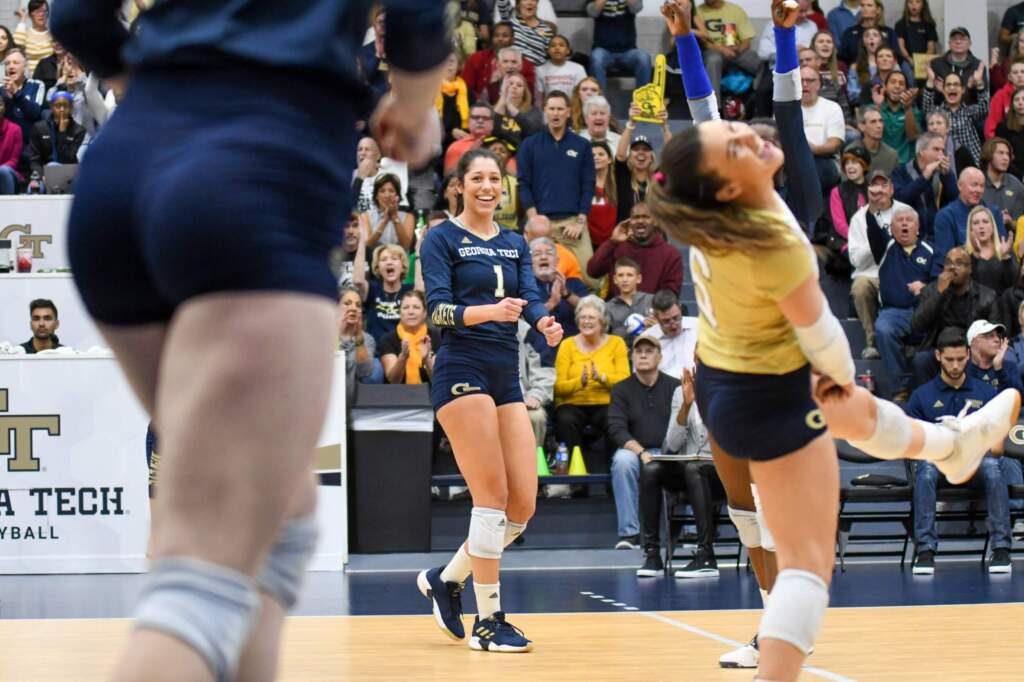 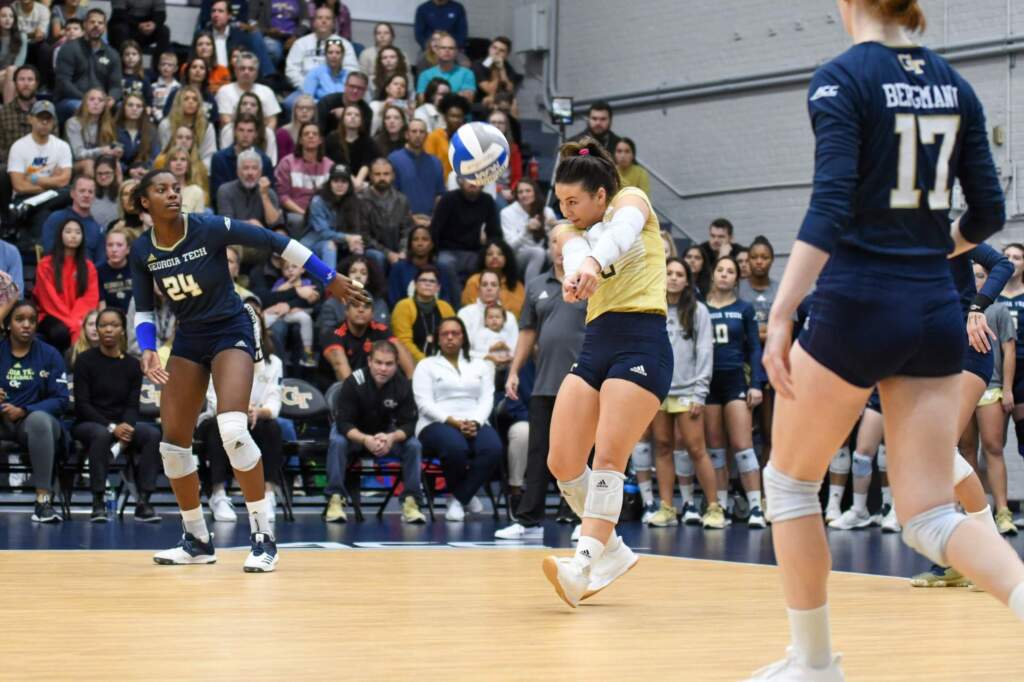 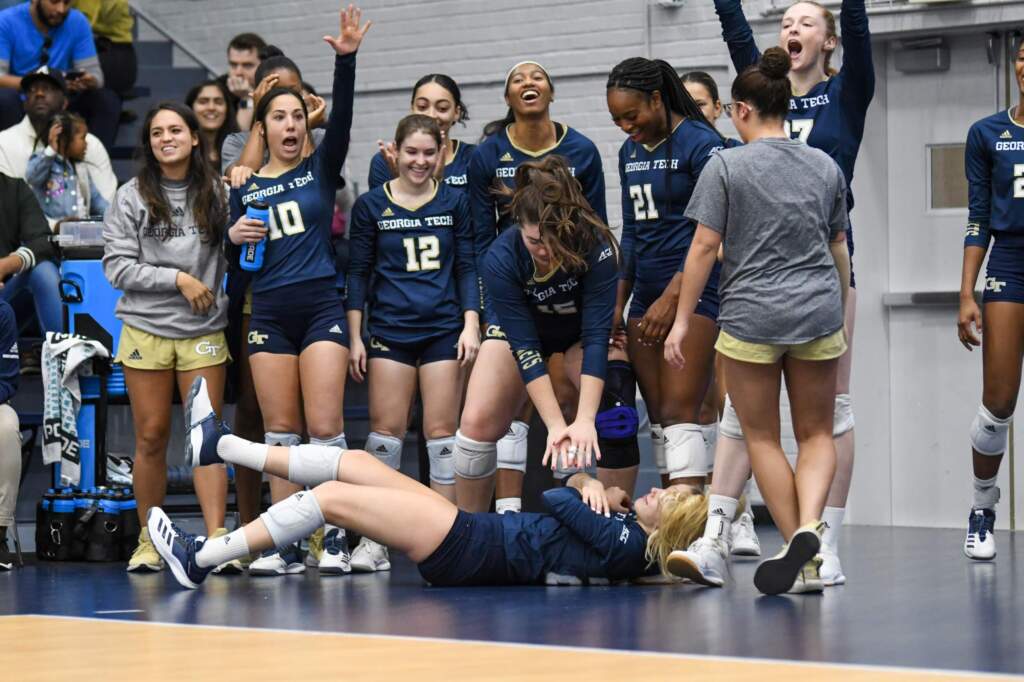 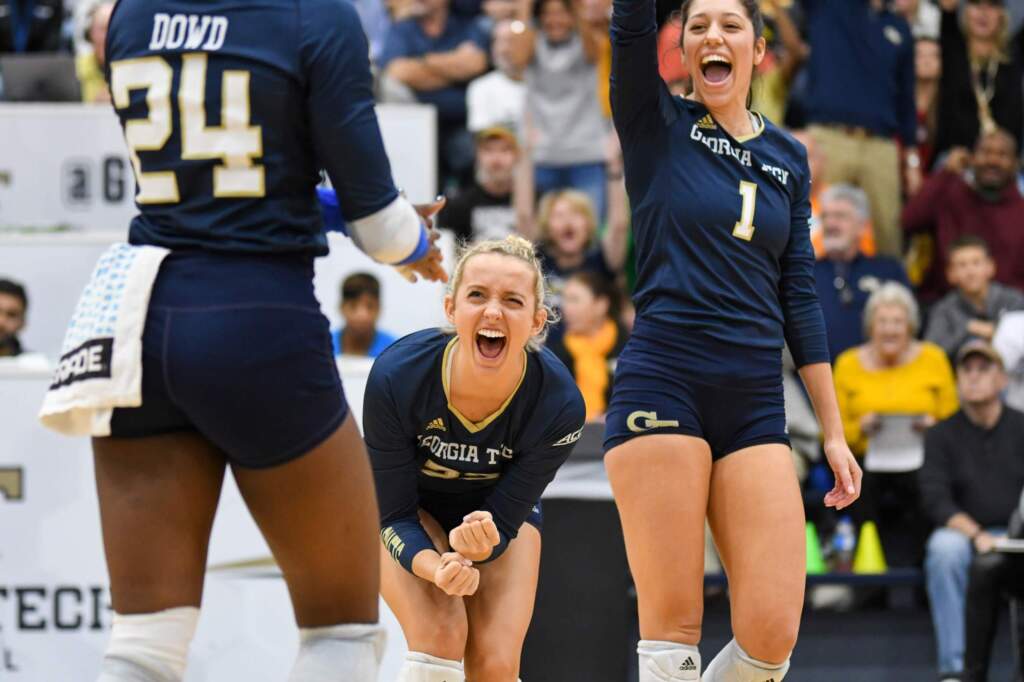 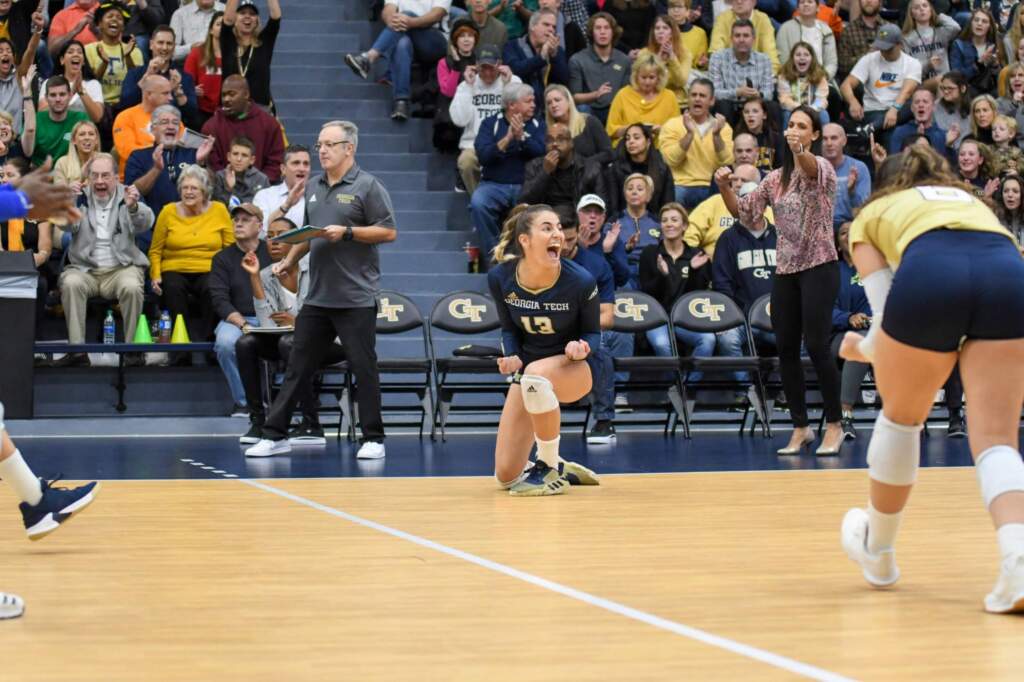 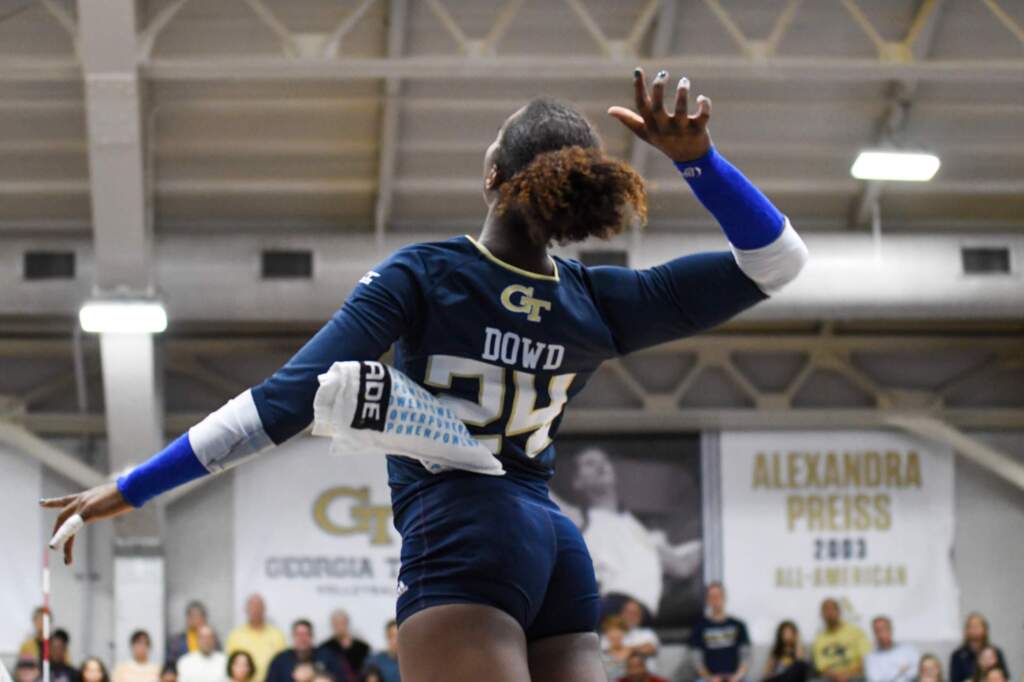 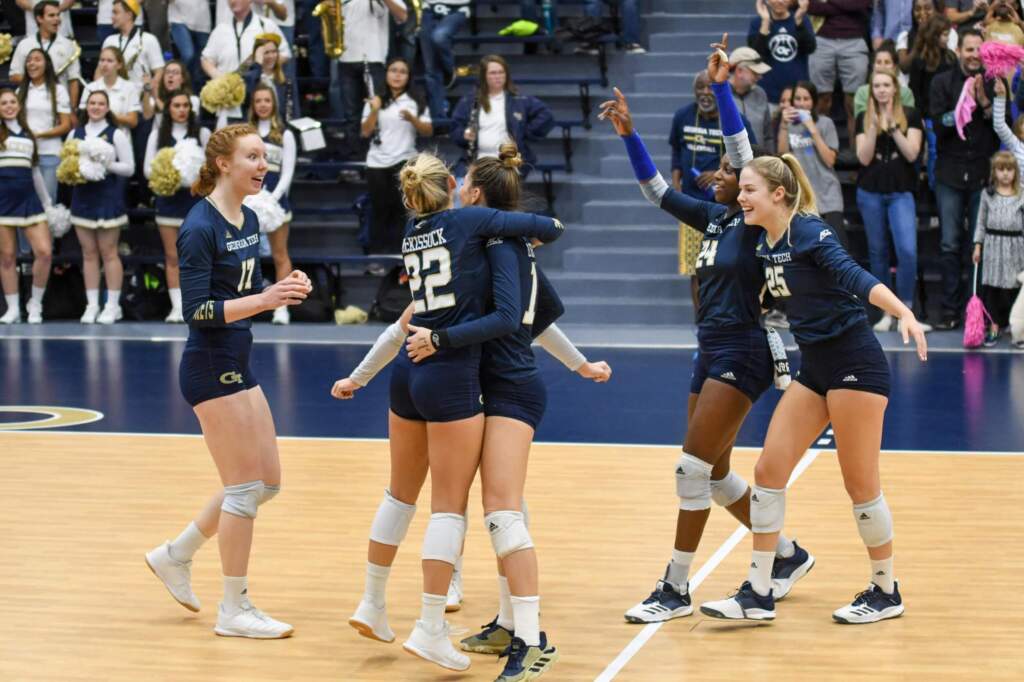 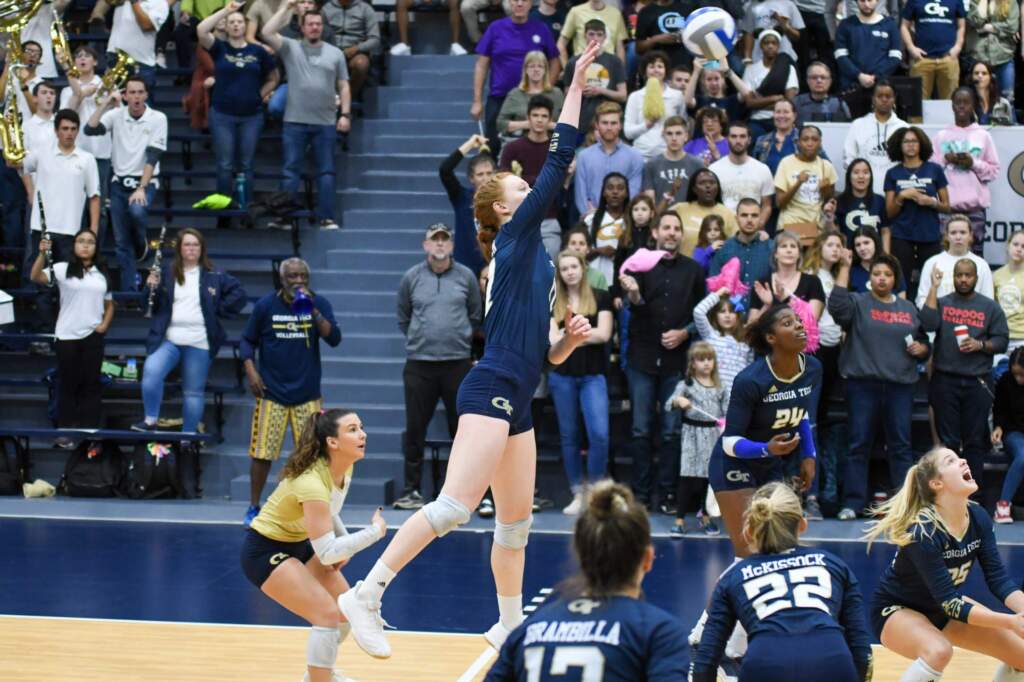 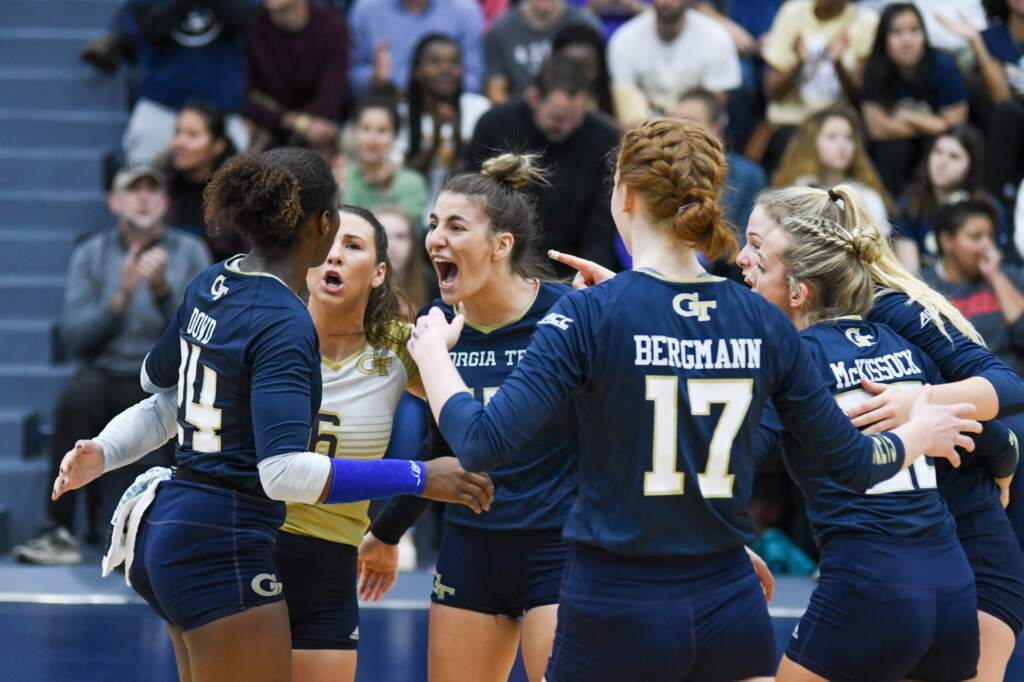 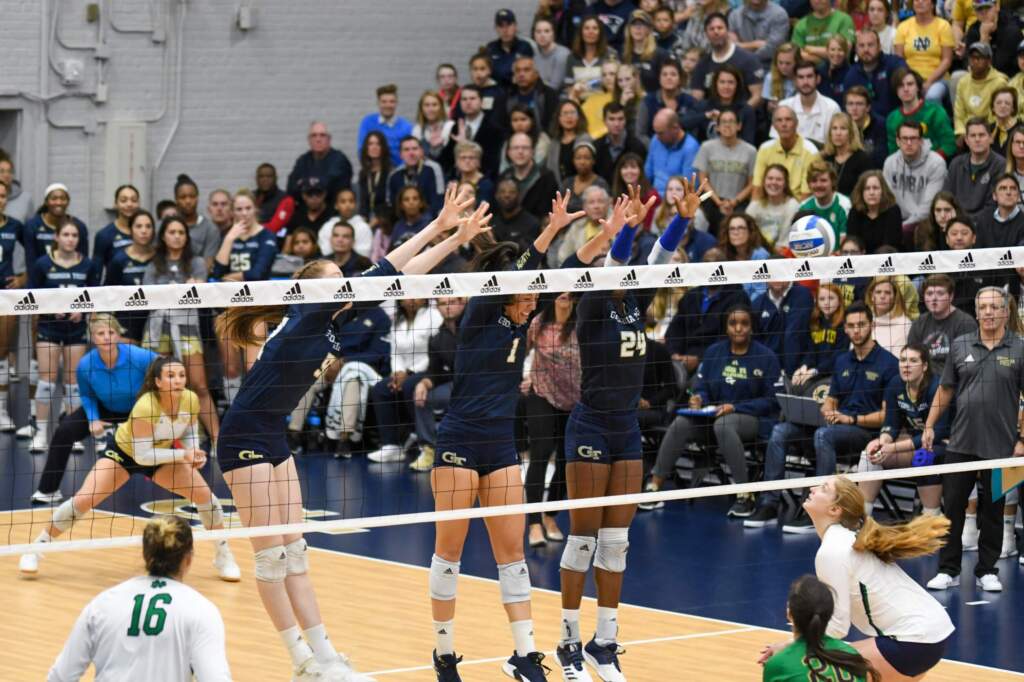 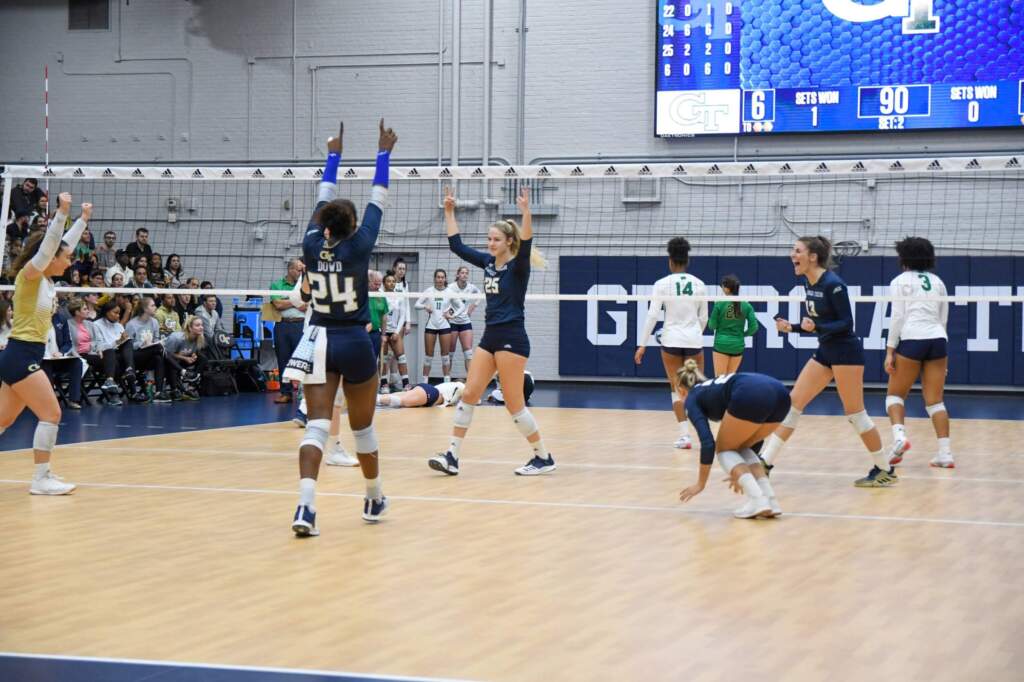 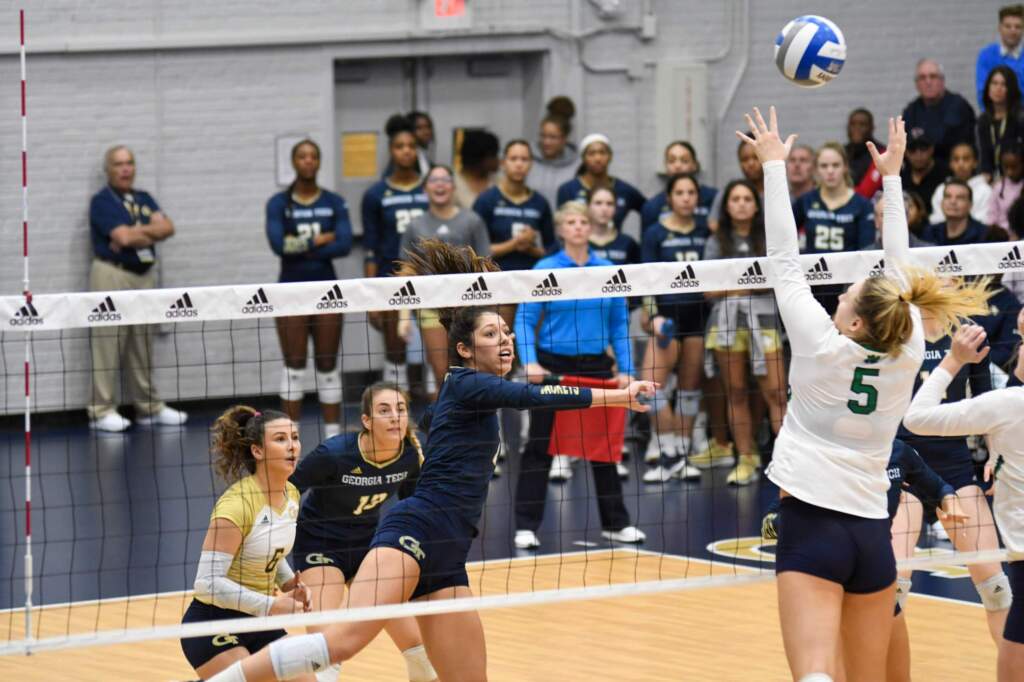 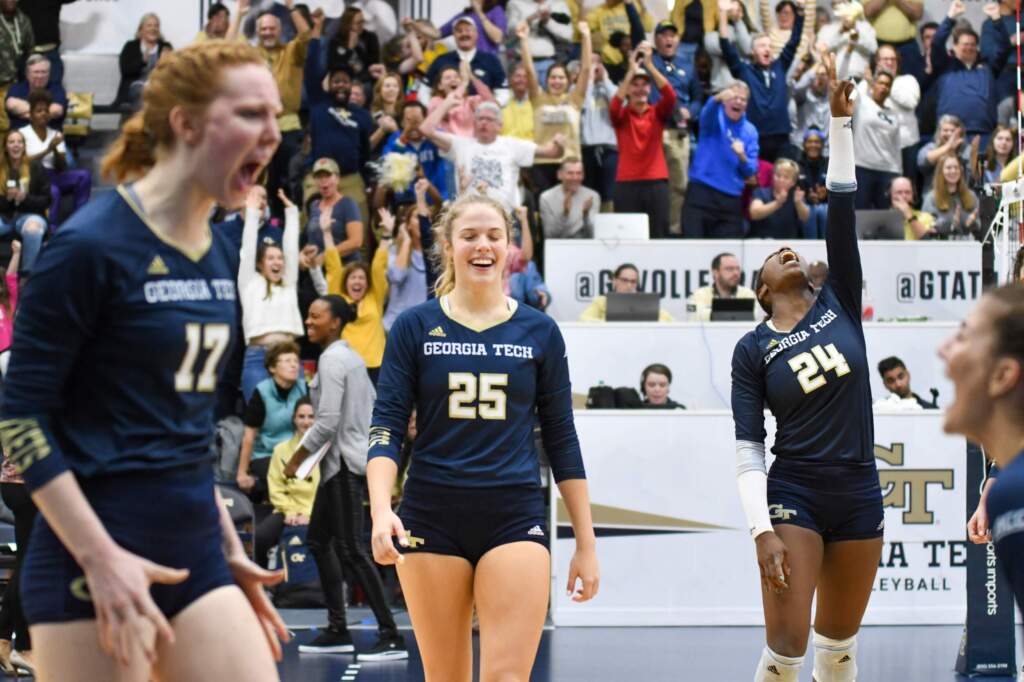 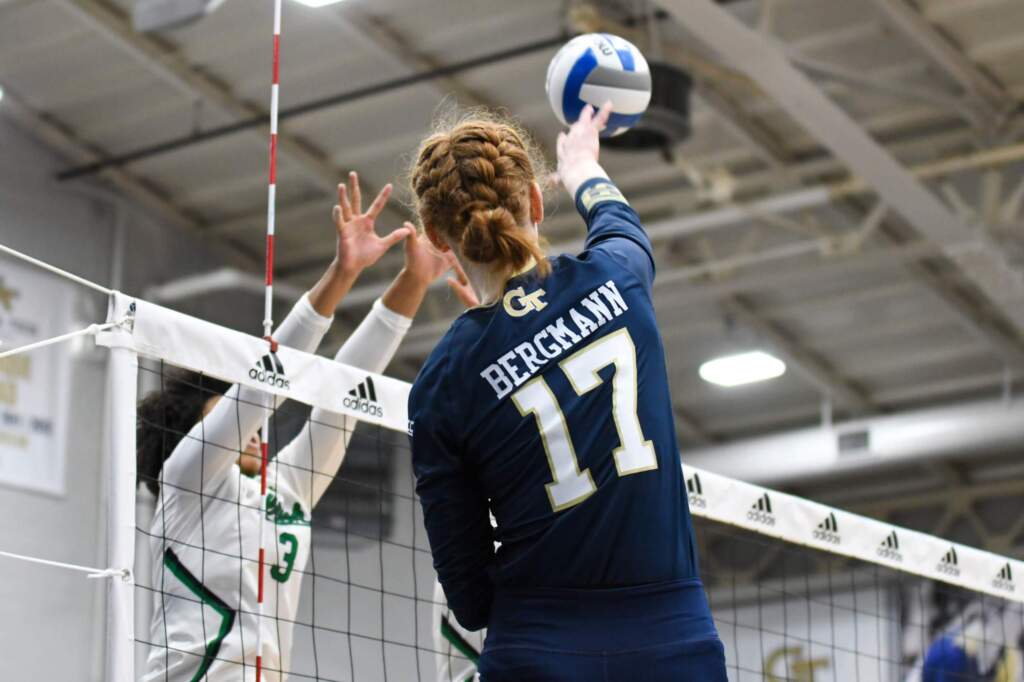 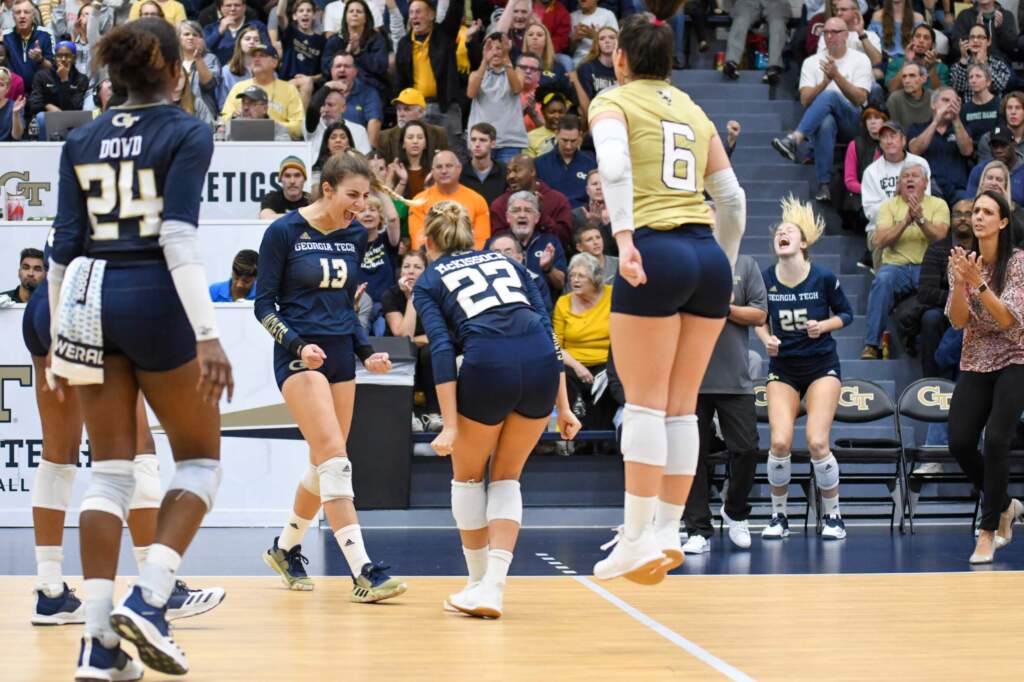 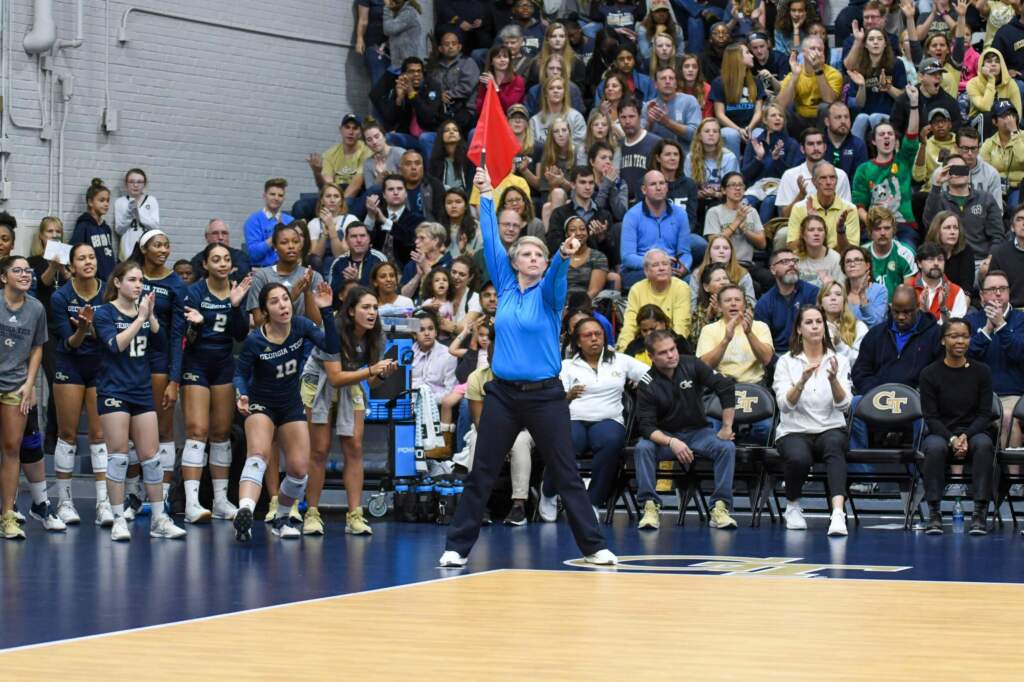 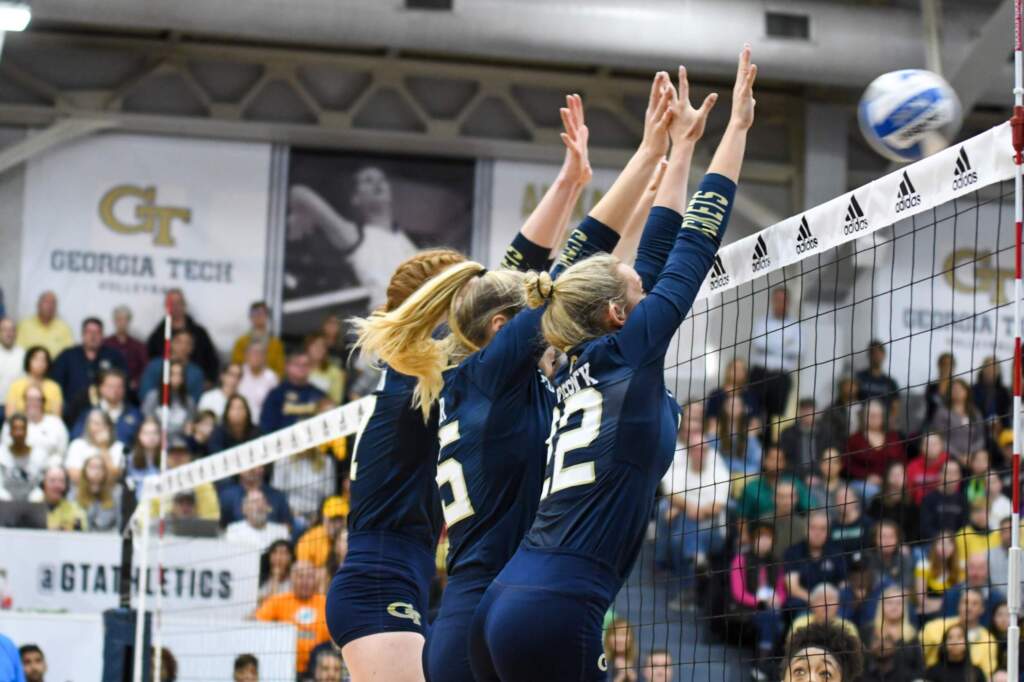 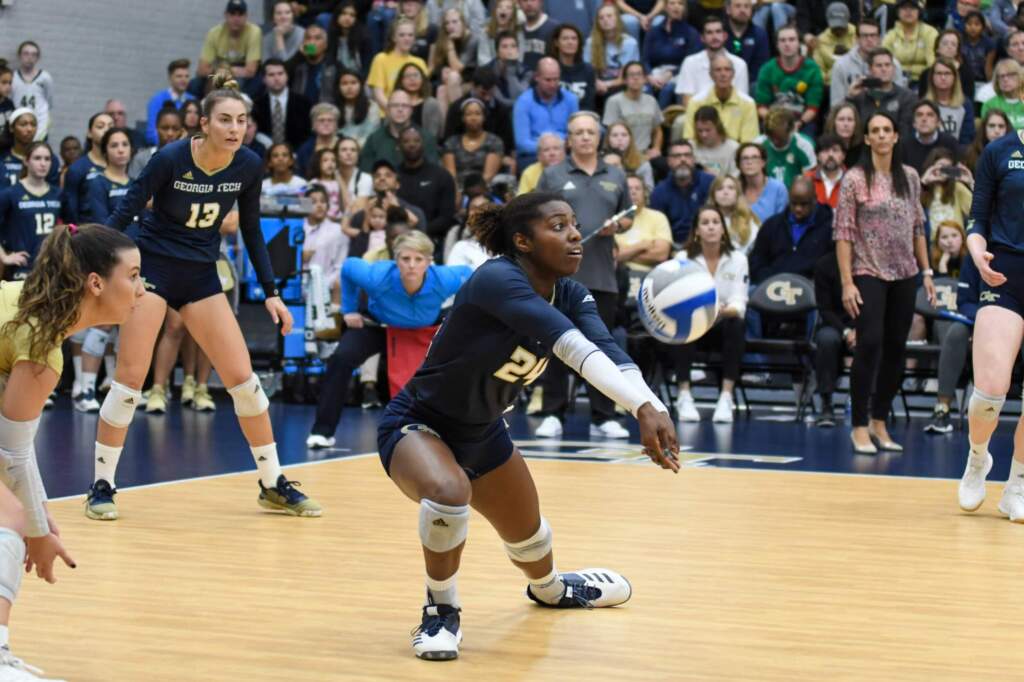 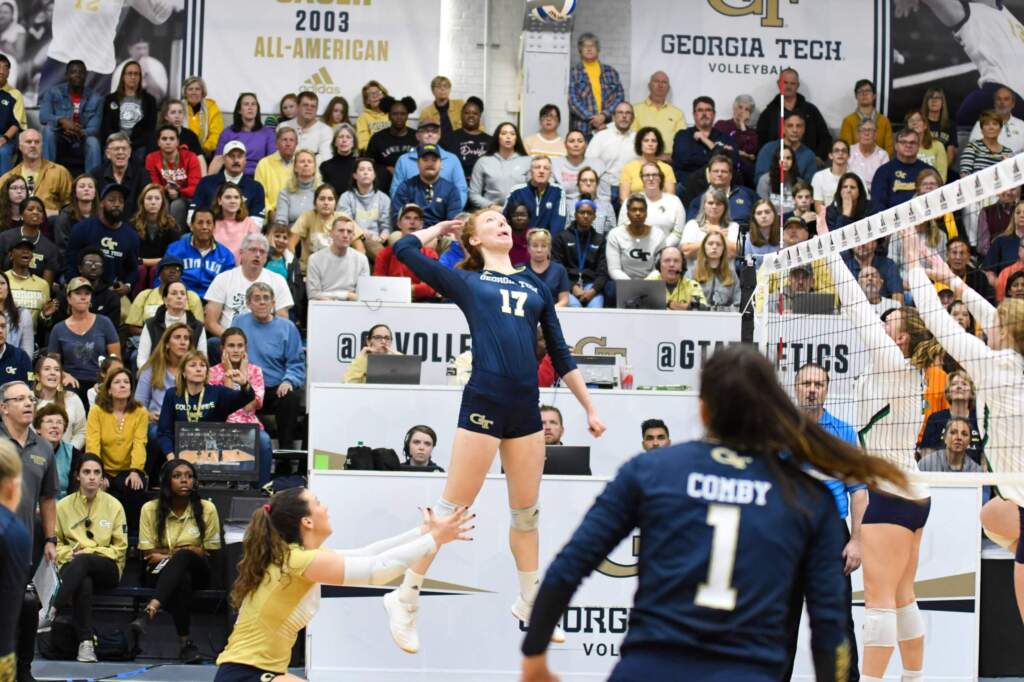 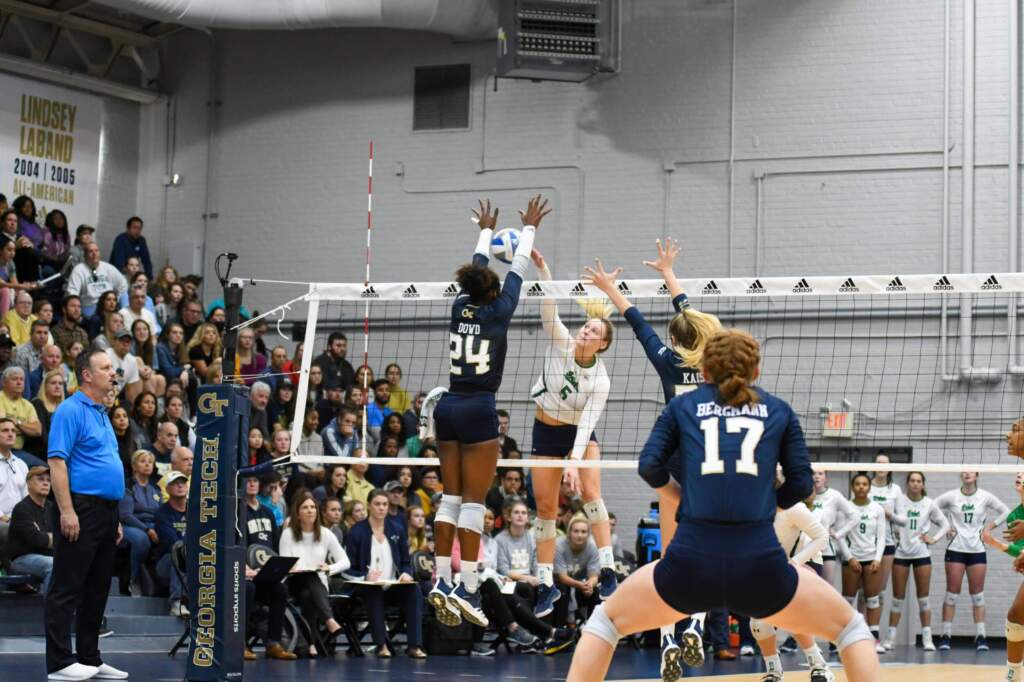 Hear from @collmich as she chats with @Keleeveland after today’s HUGE win over Notre Dame. pic.twitter.com/urek6nJpFh

How it happened:
Tech jumped out to a 6-2 lead in the first on a service ace from sophomore Mariana Brambilla and Notre Dame used its first timeout early. The Jackets pushed their lead to six at 9-3 on a solo block from freshman Julia Bergmann. The Jackets kept rolling, leading 18-10 on a kill from sophomore Mikaila Dowd and the Fighting Irish called for their second timeout. Notre Dame took three in a row to bring the score to 23-18 and Tech used its first timeout with the five-point lead. Sophomore Kayla Kaiser slammed down a kill to give the Jackets set point at 24-19 but the Irish put one more point on the board before Bergmann claimed the set for the Jackets at 25-20 with a kill.

The second set was a closer start, Tech trailed by three at 15-12 at the media timeout. A kill from Brambilla brought the Jackets within one at 16-15 but Notre Dame moved back out at 20-17 and Tech signaled a timeout. The Jackets weren’t able to catch the Fighting Irish and Notre Dame took the second at 25-18 to knot the score at 1-1.

Notre Dame carried the momentum into the third, taking a 12-7 lead and Tech called timeout. The Jackets fell behind by six at 17-11 but back-to-back kills from Brambilla put Tech within four at 17-13 and Notre Dame called timeout. Tech kept battling, coming within one at 17-16 on a kill from Dowd but the Fighting Irish pushed back out and Tech used its second timeout with the score at 22-18. Tech only tacked on two more points before the Irish took the third set at 25-20 for the 2-1 lead.

Notre Dame took the first lead of the fourth set but the Jackets kept it close never trailing by more than three before tying the set at 13-13 on an attack error. A kill from senior Kodie Comby put the Jackets ahead at 14-13 before Brambilla’s 18th kill of the match moved the score to 15-13 to incite the media timeout. Tech held onto its lead, moving the tally to 20-17 on a kill from Bergmann and the Irish called for a timeout. Bergmann and Kaiser teamed up on the block coming out of the timeout and Brambilla added on another kill and with the score at 22-17 Notre Dame used up its second timeout. Making it a 6-0 run, Tech finished out the set at 25-17 on a kill from Brambilla to force the fifth.

Tech leapt to a 4-0 lead in the fifth and Notre Dame called timeout following a kill from Bergmann. The Jackets kept at it, leading 8-2 at the switch and the Irish used their second timeout. Notre Dame came within four and with the 10-6 lead, Tech called a timeout of their own. Tech allowed only two more points before Bergmann secured the 3-2 victory at 15-8 in the fifth.

Up next:
The Jackets finish out the regular season on the road, facing Miami in Coral Gables, Fla. on Friday, Nov 29 at 3 p.m.