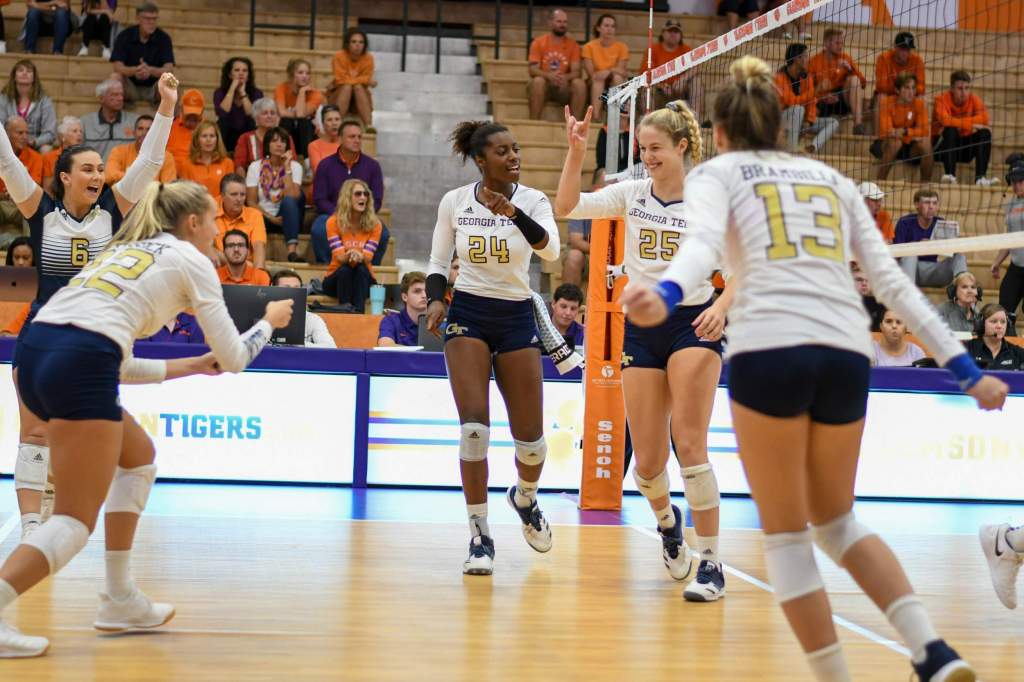 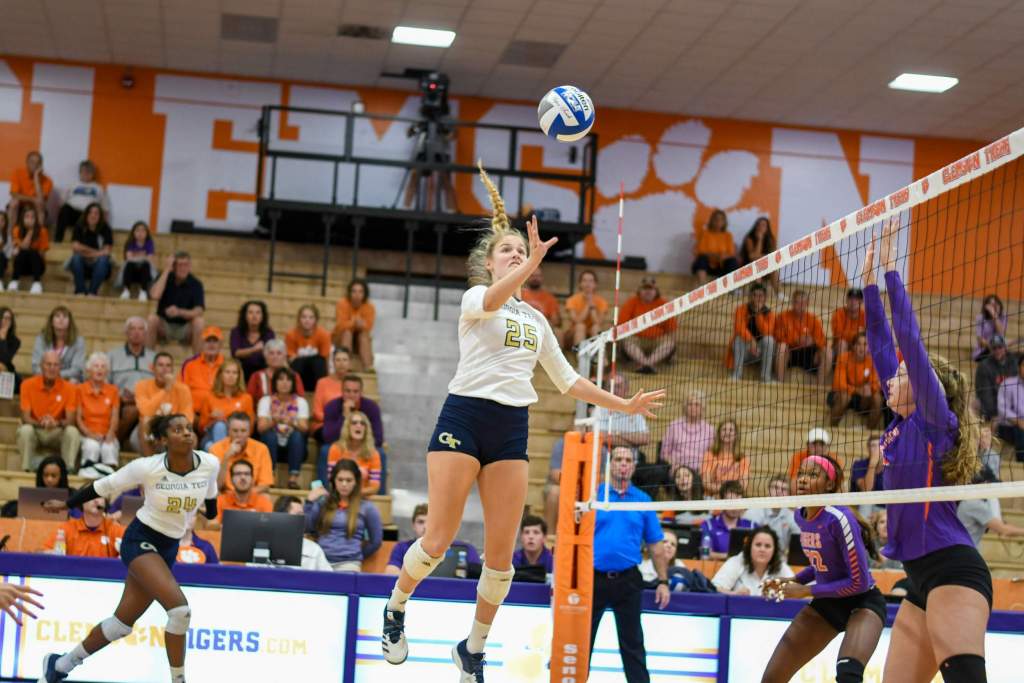 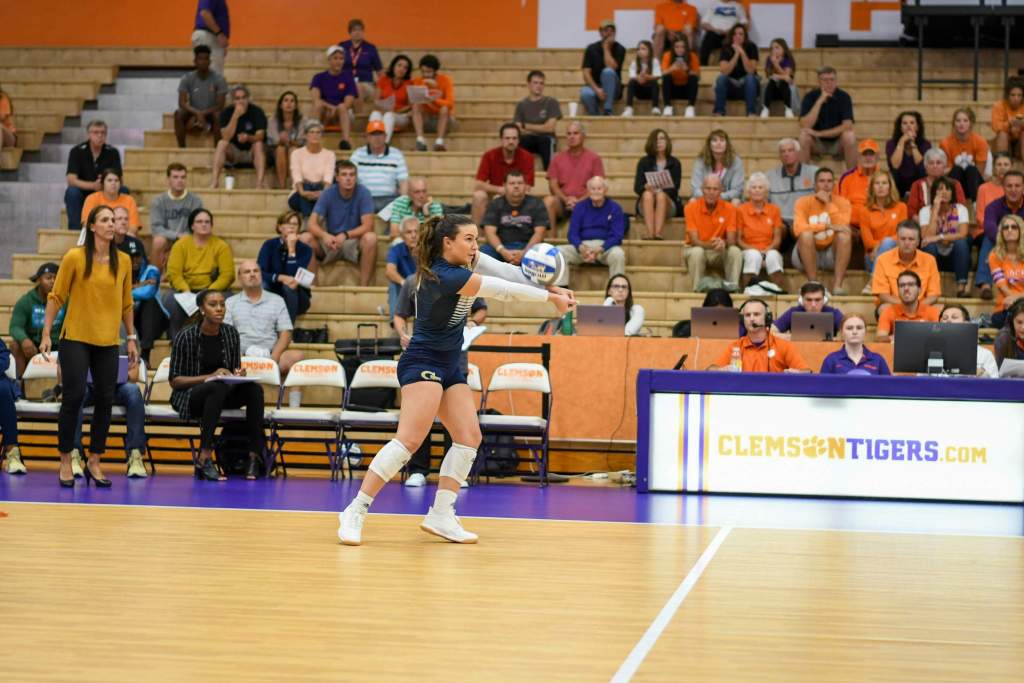 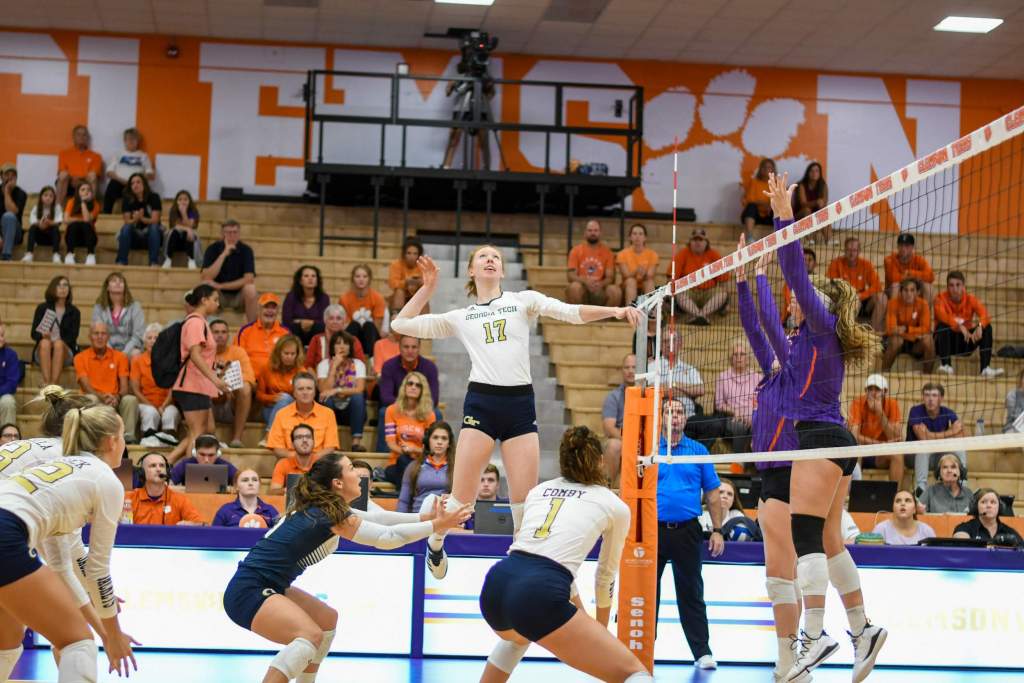 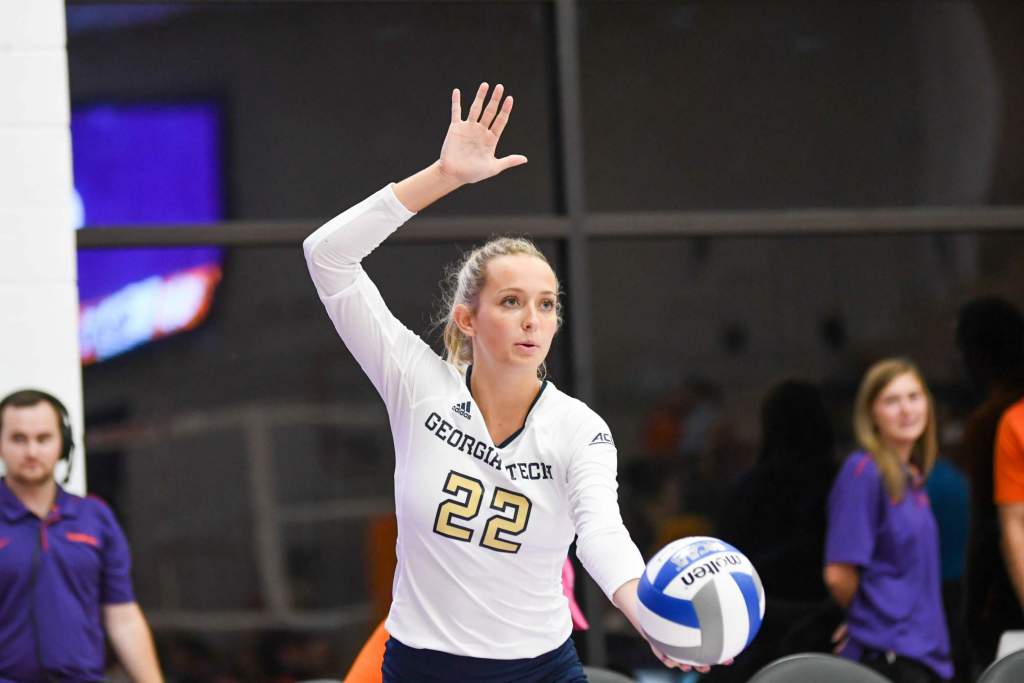 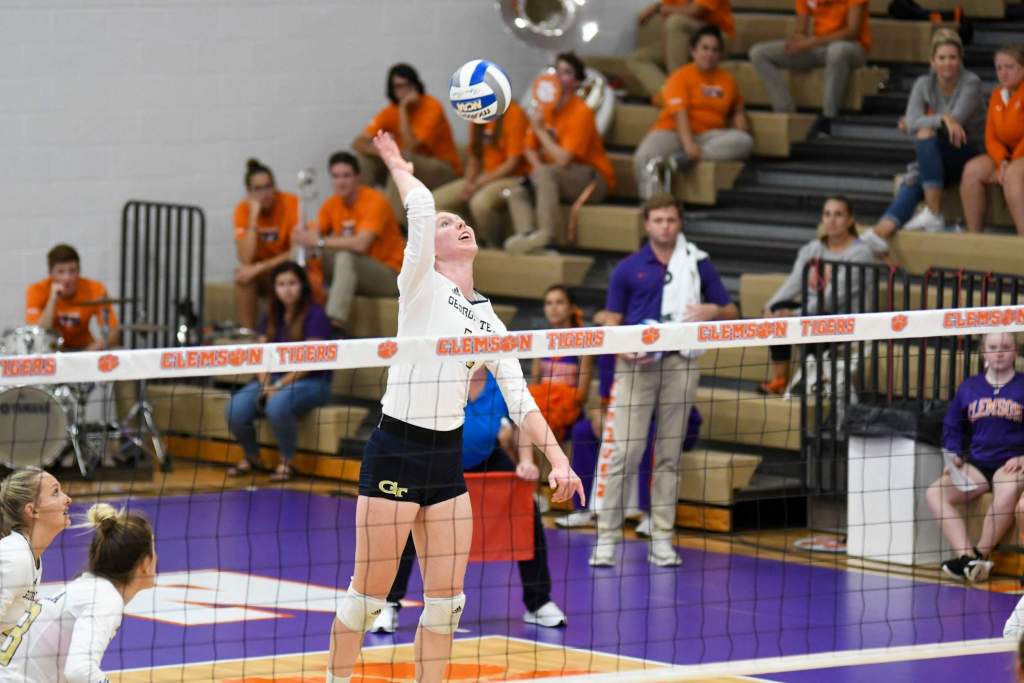 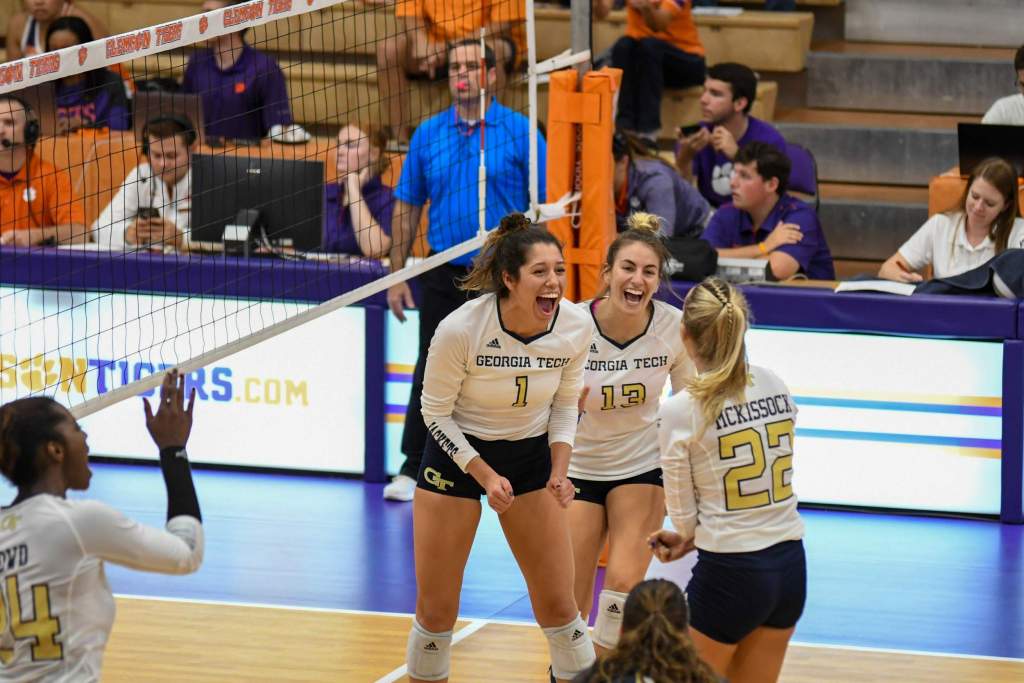 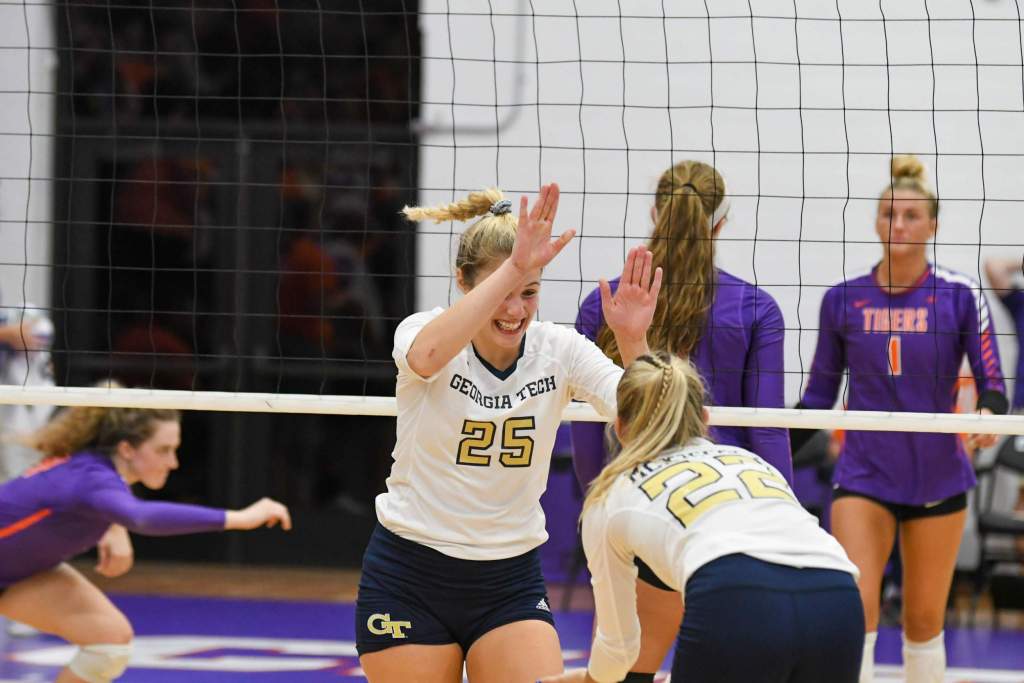 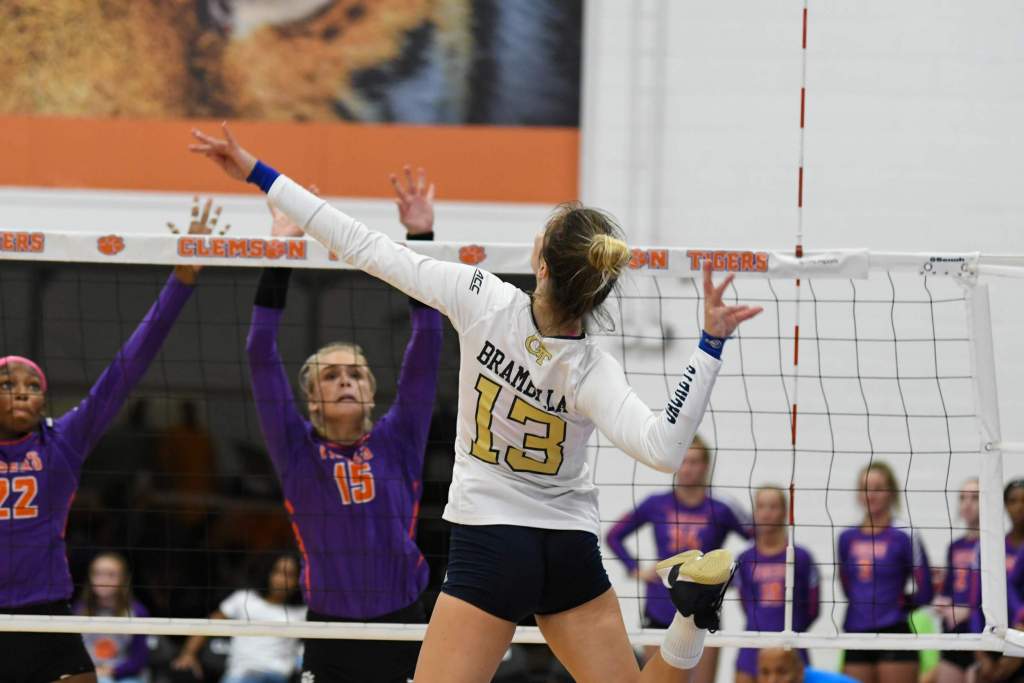 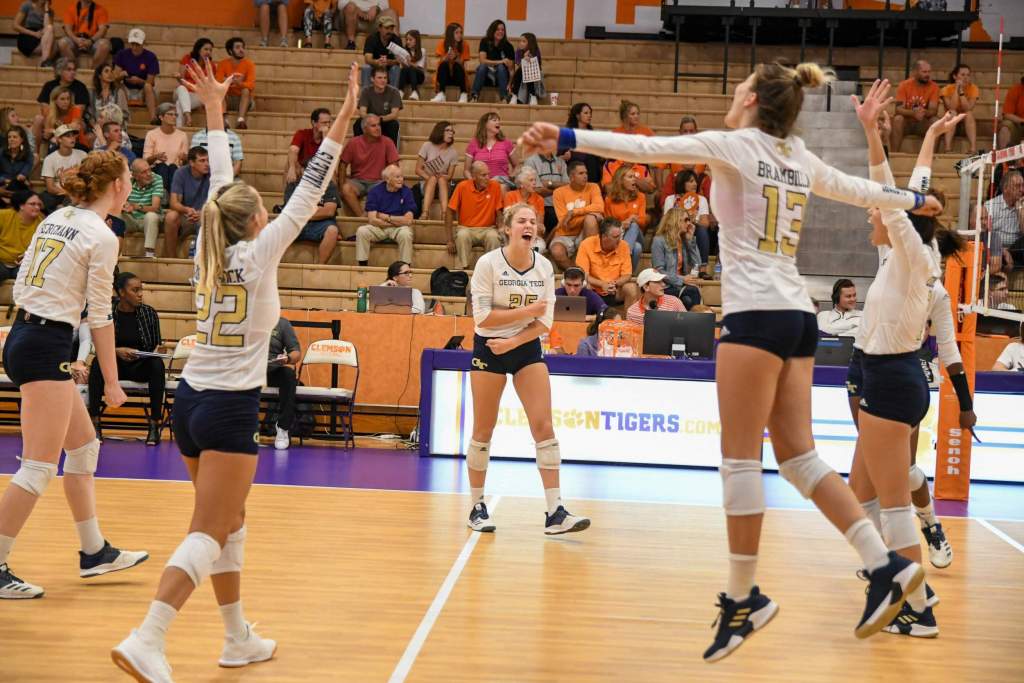 How it happened:
The first set started out close with the teams trading points and the lead to a tie at 11-11 before the Jackets snuck ahead to lead 15-13 on a service error to force the media timeout. Senior Kodie Comby and sophomore Mikaila Dowd teamed up on a block to put Tech ahead 16-13 coming out of the timeout and Clemson called one of their own. The Jackets stayed ahead, leading 20-14 on a sneak attack from sophomore setter Matti McKissock and Clemson burned its second timeout. McKissock and Comby put up a block but the Tigers took three in a row to bring the score to 21-17 and Tech called its first timeout. The White and Gold got back on track with another kill from McKissock and used a 4-0 run to end the set at 25-17 on a kill from Bergmann for the 1-0 lead.

Tech took in early lead in the second, trailing 4-3 the Jackets made a 7-1 run with four kills from freshman Julia Bergmann to lead 10-5. Clemson fought its way back within one at 11-10 but a 4-0 run sparked by a kill from sophomore Kayla Kaiser put the Jackets ahead 15-10 at the media timeout. The Tigers brought it back within two at 16-14 and the Jackets used a timeout. Tech held onto its lead, moving it to a five-point advantage on a kill from Brambilla at 23-18. Dowd gave the Jackets set point at 24-19 and the Tigers got in one more point before a kill from Comby sealed the set at 25-20 for the 2-0 edge.

The Jackets carried the momentum into the third, cruising to a 5-0 lead with Bergmann at the service line and Clemson used its first timeout early. Tech kept rolling, moving its lead to 9-2 on a kill from Dowd. Clemson battled back to knot the score at 12-12 but a crafty kill from Kaiser put Tech ahead again. The Jackets stayed ahead, pushing the lead to 19-15 on another ace from Kaiser and Clemson signaled for timeout. Tech held the Tigers off, reaching match point at 24-17 on an attack error. Clemson snuck in three more points before a service error gave the Yellow Jackets the sweep at 25-20.

Up next:
The Jackets finish out their four-match road stint on Sunday, Oct. 13, traveling to Blacksburg, Va., to take on Virginia Tech at 1 p.m. on ACCNX.