Jackets, No. 12 Bulldogs to Hold Spring Classic at SunTrust Park

THE FLATS – Georgia Tech (27-21) and No. 12 Georgia (33-14) will meet for the third time this season in the 16th annual Farmview Market Spring Classic for Kids baseball game on Tuesday night at 7 p.m. The proceeds from ticket sales go toward funding critical patient and family initiatives at the Aflac Cancer and Blood Disorders Center of Children’s Healthcare of Atlanta.

The midweek bout will also be broadcast live on WREK 91.1 FM radio and online at WREK.org.

Live stats for the Tuesday night contest can be found above or on the baseball schedule page at RamblinWreck.com.

In the prior two meetings this season, the Georgia Bulldogs have come out on top in both contests. UGA shut out Tech 4-0 in the first meeting in Athens, Ga. on April 3 and then defeated the Jackets 8-3 at Russ Chandler Stadium in Atlanta, Ga. on April 25.

Georgia Tech is 14-4 this season when posting a big inning offensively, meaning scoring four runs or more in an inning for the game. The Jackets have totaled 23 big innings this season, including scoring a season-high seven runs in the fifth inning of a 16-3 win versus Florida State (April 8).

In the rivalry series, the Bulldogs have won five-straight over the Jackets entering play on Tuesday night. The Jackets last win over its rival was a 6-3 win at Turner Field for the 14th annual Spring Classic for Kids baseball game on May 17, 2016.

Since falling to Georgia at 8-3 on April 25, the Yellow Jackets have gone 5-1 over their last six games. Tech took two-of-three games versus Wake Forest (April 27-29) and then swept Radford (May 4-6).

Over the Jackets’ seven-game homestand the last two weeks, the pitching staff has combined to strike out 81 batters, an average of 11.6 strikeouts per game. In comparison, the Jackets have walked just 19 batters over that seven-game span, an average of just 2.7 walks per outing.

The Yellow Jackets’ pitching staff is averaging 9.0 strikeouts per game this season. Tech’s arms are also averaging 9.1 strikeouts-per-nine innings on the year.

Tech’s number one most played opponent in the program’s history is the University of Georgia Bulldogs. The two teams first met back in 1898, and will be meeting for the 373rd time on Tuesday night. Georgia holds the all-time series lead over the Jackets at 209-161-2.

Georgia Tech will remain on the road to take on the Virginia Cavaliers in conference play this weekend, May 11, 12 and 14 in Charlottesville, Va. 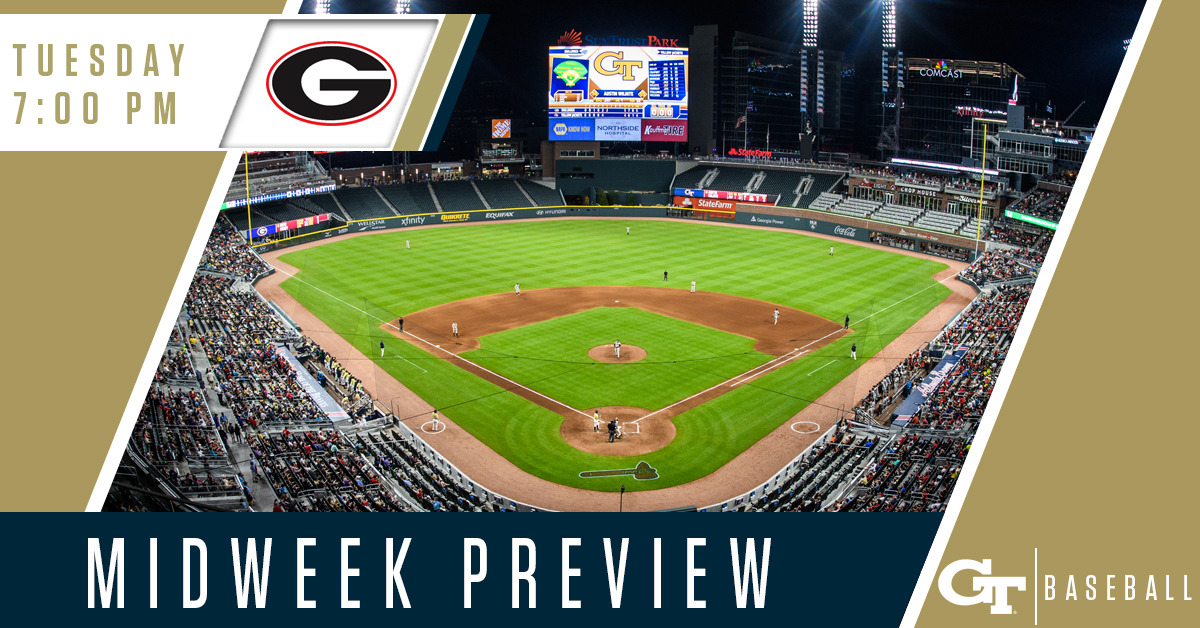