THE FLATS – Georgia Tech will open its Atlantic Coast Conference schedule with two games at home for the first time since the 2005-06 season and will have five of its first eight ACC games at home in the 2018-19 season. The ACC announced the full conference basketball schedules for all 15 members Thursday morning.

Tech opens its ACC slate at home against Wake Forest on Saturday, Jan. 5, and Virginia Tech on Jan. 9. Before the end of January, the Yellow Jackets also will host Louisville (Saturday, Jan. 19), Notre Dame (Jan. 22) and North Carolina (Jan. 29) at McCamish Pavilion.

In between, Tech follows its opening homestand with visits to Syracuse on Sunday, Jan. 12 and Clemson on Jan. 16. Following the Louisville and Notre Dame home games, the Jackets visit Duke on Jan. 26.

In the month of February, Tech visits Florida State for a Saturday afternoon game on Feb. 2 before Clemson makes its return trip to Atlanta on Feb. 6. The Jackets then go on the road for two games at Notre Dame (Feb. 10) and Virginia Tech (Feb. 13) before hosting the Seminoles (Saturday, Feb. 16) and Pittsburgh (Feb. 20) in succession at McCamish Pavilion.

The Yellow Jackets finish the regular season with three of four games on the road, traveling to Miami (Feb. 23) and Virginia (Feb. 27), before hosting Boston College (Sunday, March 3). Tech visits NC State on March 6 in the final regular-season game, then has the weekend off before the ACC Tournament (March 12-16 in Charlotte, N.C.).

Additional information regarding tip times and television coverages for the Yellow Jackets’ non-conference games will be announced in the near future. Tech’s slate features a Dec. 22 home game against Georgia and road games against power conference teams Arkansas, Northwestern, St. John’s and Tennessee (No. 8 in the ESPN “Way too Early” top 25). The Jackets open the season Nov. 9 against Lamar at McCamish Pavilion.

Season ticket prices for the 2018-19 home schedule start at $290, which is less than $15 per game. Other great benefits of purchasing season tickets include participating in an exclusive season ticket holder event with Coach Pastner and the team, priority access to purchase single-game and postseason tickets, season parking options and more. 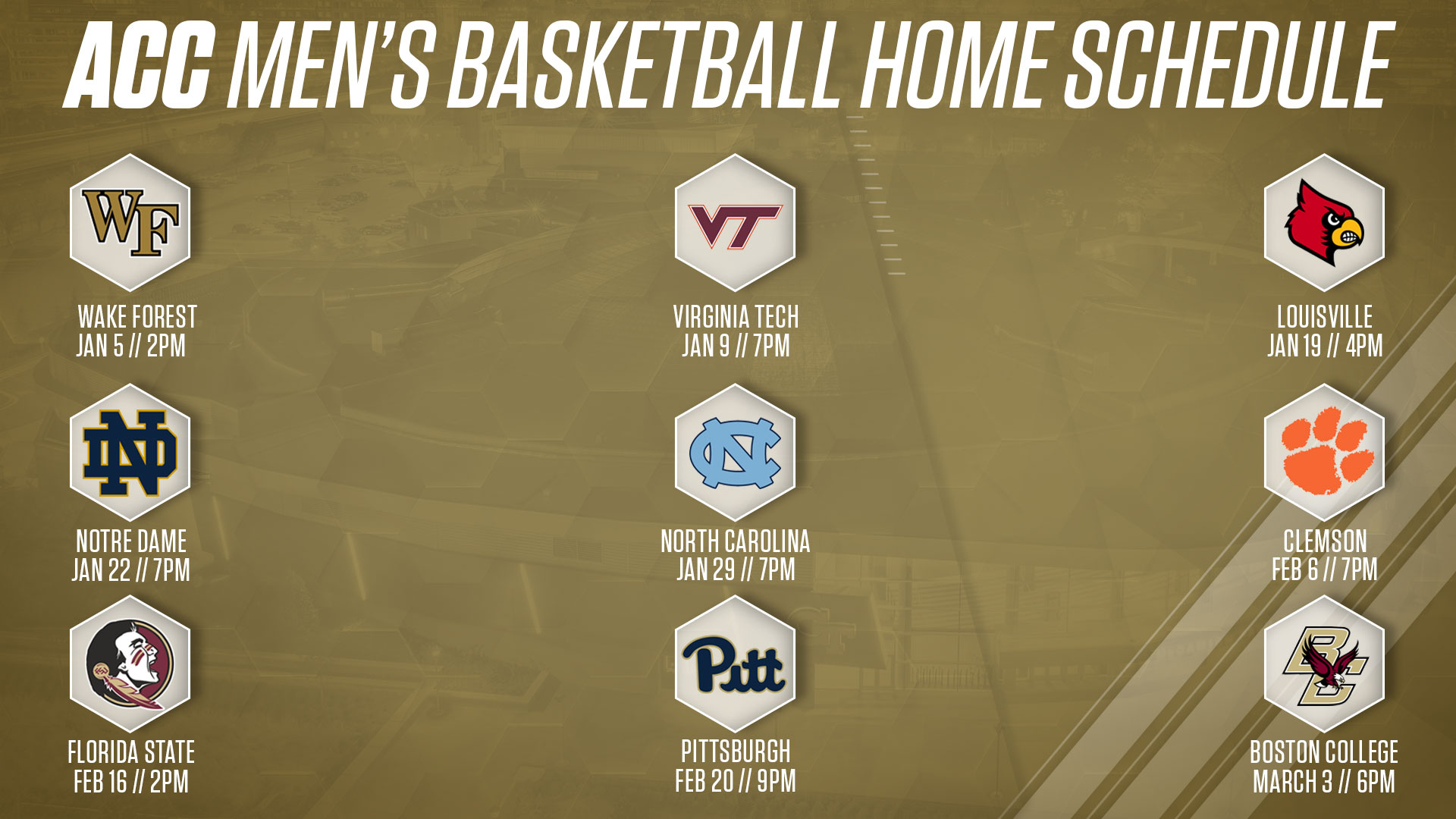 Georgia Tech’s men’s basketball team is beginning its third year under head coach Josh Pastner. Tech has been a member of the Atlantic Coast Conference since 1979, won three ACC Championships (1985, 1990, 1993), played in the NCAA Tournament 16 times and played in two Final Fours (1990, 2004). Connect with Georgia Tech Men’s Basketball on social media by liking their Facebook Page, or following on Twitter (@GTMBB) and Instagram. For more information on Tech basketball, visit Ramblinwreck.com.