Inside The Chart – Virginia

The pregame coaches’ interview always involves a certain degree of clairvoyance.  Coaches are asked to predict how the game will unfold, how their opponent will play, and what their team’s keys to victory will be.  Still, Josh Pastner offered a rare level of specificity during our pregame interview before Georgia Tech’s game versus Virginia on Jan. 23 in Charlottesville.

Indeed, had Michael Devoe made a pull-up three-pointer as time expired, Georgia Tech (9-6, 5-4 ACC) would have reached 65 points exactly and upset the league-leading Cavaliers.  Pastner knows his team played well enough to beat Virginia, owners of a 13-game ACC win streak at the time.  Instead the Yellow Jackets finished with a frustrating, 64-62 loss and missed out on a top-line win for their NCAA Tournament résumé.

Pastner hasn’t promised any prophesies for Wednesday, but his team will get another chance at No. 9-ranked Virginia (12-3, 8-1 ACC) at McCamish Pavilion.  The Yellow Jackets also have a chance to extend their school-record 11-game home ACC win streak.  The last conference team to beat them?  The team they’ll be facing Wednesday – Virginia upended Tech 63-58 on Jan. 18, 2020. 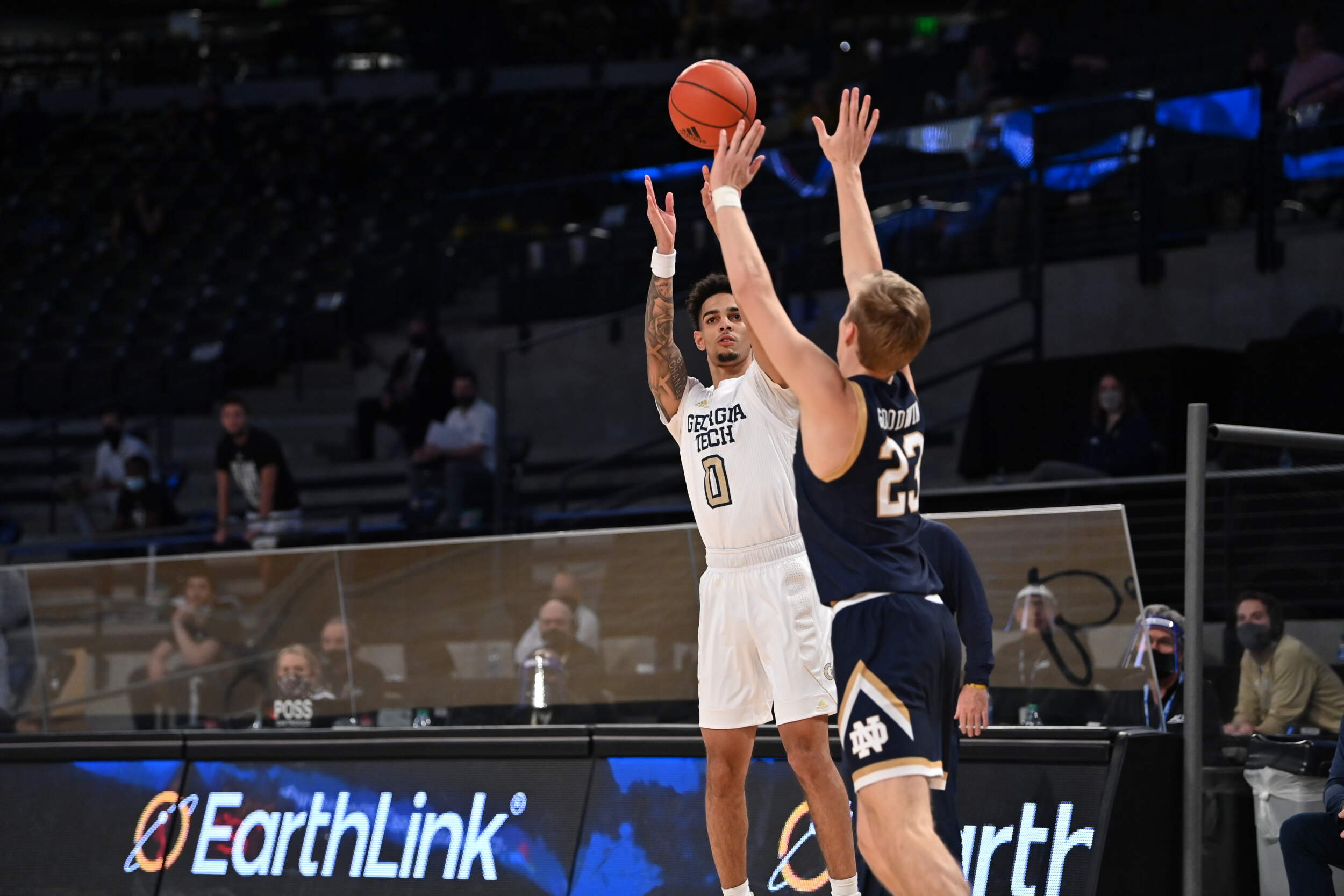 Michael Devoe has connected on 57.1 percent of his three-point attempts at home in ACC games. (photo by Danny Karnik)

Devoe labored through a 1-for-8 shooting night against Virginia, including that missed three in the closing seconds.  Afterwards, Pastner counted at least four instances where his junior had a clean look at a three, only to bypass it for a drive into a crowded paint.

All unselfish scorers have to feel out the line between bravado and deference.  Devoe may need to do a better job of that Wednesday.  The good news:  he’s coming off the second highest KenPom offensive rating of his career versus Notre Dame, and he’s shooting 57.1 percent from three-point range in home ACC games (20 of 35).

For its part, Georgia Tech forced some existential crises out of several Virginia scorers as well.  Point guard Kihei Clark (9.7 ppg) missed his first nine shots before hitting the go-ahead jumper with 1:08 left.  He dished out eight assists against the Jackets, but he still finished with his second-worst offensive rating in an ACC game in the last two years.  Wing Trey Murphy III, the Cavs’ third leading scorer (11.3 ppg) and a 49-percent three-point shooter, finished with a season-low three points.  And reserve guard Tomas Woldetensae, who had a season-high 14 points in Virginia’s win over Pittsburgh, only played one minute against Tech.

Virginia survived last month in spite of Sam Hauser (22 points) and Jay Huff (18 points) shouldering most of the offense.  Pay attention to those complementary players for Virginia – if one of them gets going, it could loosen up the spacing in Virginia’s halfcourt offense.

Pastner had another reason to feel celebratory Monday: his grandfather turned 102 years old that day.  A World War II veteran, Pastner says his Dad’s father still drives and exercises four days a week.  Perhaps knowing “the go-to man is the open man” is another secret to his longevity.

Hauser and Huff both proved their worthiness for ACC Player of the Year last month, the 6-8 Hauser with his ability to pick-and-pop or back down smaller defenders from the long post, and the 7-1 Huff showing his length and inside-outside game.  The pair combined to shoot 6-of- 8 from three against Tech; the rest of the Cavaliers went 2-for-10.

Huff was also a handful in his post-up defense of Moses Wright – the senior managed just 6-of-17 shooting against the ACC’s second leading shot blocker.  When Virginia has struggled this year, opposing “5” men have often had a field day.  Tech’s big men will have to be active in the alleys.

As Virginia clawed back from an 11-point second half deficit, Georgia Tech also had trouble containing the Cavaliers’ mover/blocker action in the halfcourt.  The sets usually revolve around Hauser and Huff as screeners, with the other three players continuously coming off flares and pindown screens.  That off-ball action in turn creates looks for Hauser and Huff.

Virginia’s offense is designed to wear opponents down – the Cavaliers rank last in the country in tempo – and their three-point shooting (6th NCAA, 39.8%) makes teams pay for trying to short-circuit that tempo by gambling for steals.  Part of what makes Virginia tricky is their top three-point shooters are their “3,” “4” and “5” men.  Can Georgia Tech have better discipline staying connected on that action Wednesday? 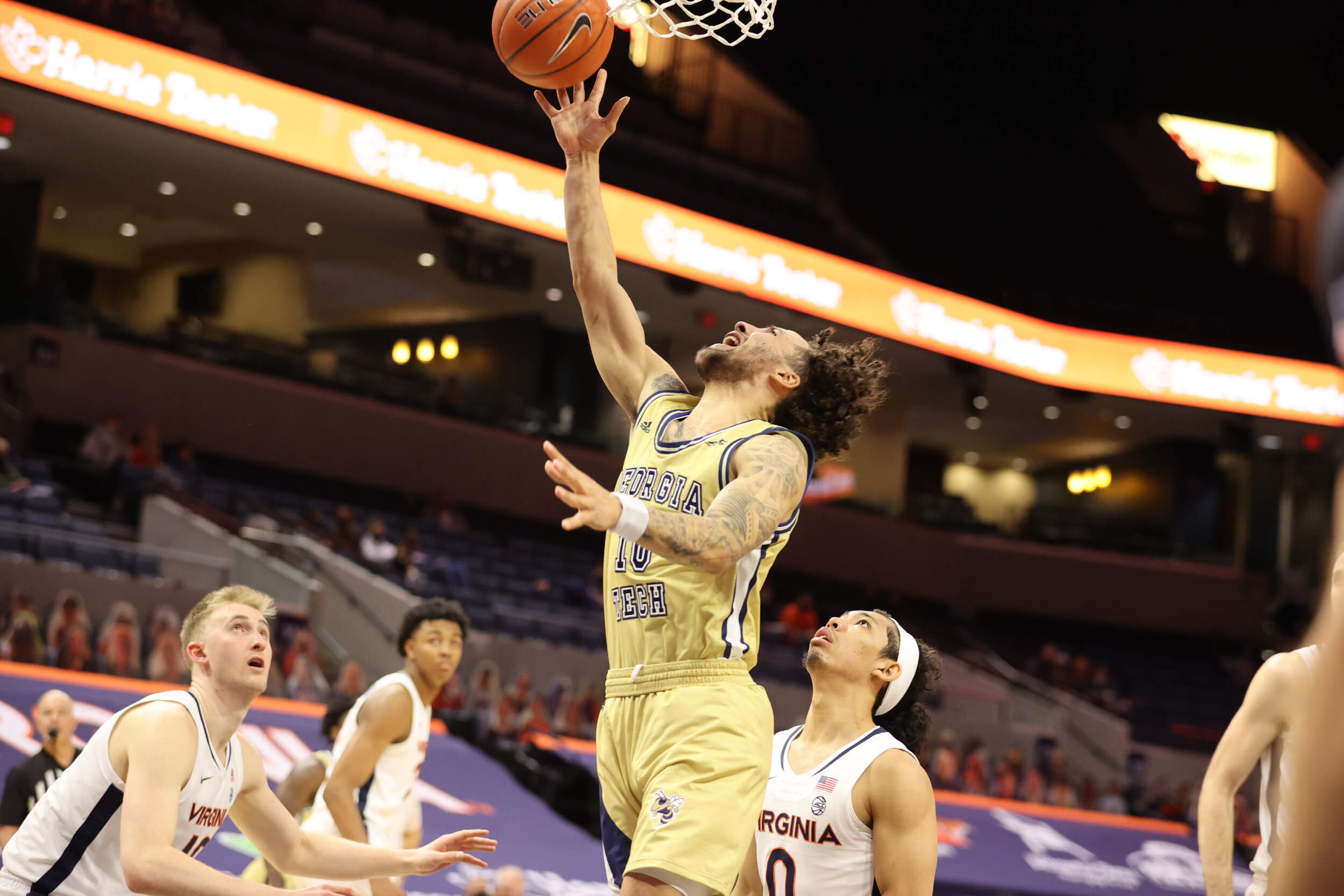 Jose Alvarado had 20 points, eight assists and six steals in the Jackets’ first meeting against Virginia. (photo by Keith Lucas)

In the last 10 years, there have only been three times where an ACC player has finished with at least 20 points, eight assists and six steals in a game (conference or non-conference).

Jose Alvarado has two of them.

Former Yellow Jacket Iman Shumpert has the other.

Alvarado will once again have to navigate Virginia’s cinderblock hedges and keep Tech’s offense moving sharply.  He also finished with 19 points, six rebounds, five assists, and six steals against Notre Dame.  The last time a Yellow Jacket hit all those marks in a game?  Shumpert versus Virginia Tech.

Bubba Parham often resembles a bowling pin with the way he takes charges and lets hard-driving ball handlers crash into him.  He collected another one Saturday in Georgia Tech’s win over Notre Dame.

It’s a more fitting comparison than you think.  The Snellville, Ga., native is an avid bowler who rolled a 276 a few weeks ago.

Now that we’re ready, we hope you are as well.  Join us for pregame coverage starting at 6:30 p.m. ET on the Georgia Tech Sports Network from Learfield IMG College.  See you at McCamish.