Inside The Chart – Syracuse

Can a cruel loss also be a confidence builder?

That’s the question trailing Georgia Tech (9-6, 1-1 ACC) as it heads to the Carrier Dome Saturday to face the Syracuse Orange (11-4, 2-0 ACC).  Yes, the Yellow Jackets cursed their missed chances Wednesday in a 52-49 loss to No. 9 Virginia Tech.  Missed layups, turnovers, uncashed one-and-ones – they all helped spoil an upset and potential resume-boosting win.

Yet Georgia Tech also held Virginia Tech, fifth in the nation in offensive efficiency coming in, to 29.8-percent shooting from the floor.  The Hokies wheezed out of McCamish Pavilion 29 points shy of their season scoring average.

If the Yellow Jackets can do that to a potent, polished offensive team like Virginia Tech, what might their defense do to the rest of the league?

Filtering that confidence from a tough loss could be key for Georgia Tech as it forges ahead in the ACC.  Their next opponent won’t make it easy.

Then again, neither will Tech.

After reaching the NCAA Tournament as one of the “last four in” last year, Syracuse crumpled up brackets nationwide with a surprise run to the Sweet Sixteen.

With all five starters back, the Orange likely won’t need to use the backdoor again.

The Yellow Jackets pride themselves on their switching, bewitching defenses.  Worth noting:  in its 55-51 win over Syracuse last year, Tech played man-to-man the entire game.  They held Syracuse to a season-low 35-percent shooting.  After their most complete defensive game of the season Wednesday, how might Georgia Tech attack Syracuse Saturday?  Like the Jackets, the Orange languish near the bottom of the ACC in three-point shooting (30.3 percent). 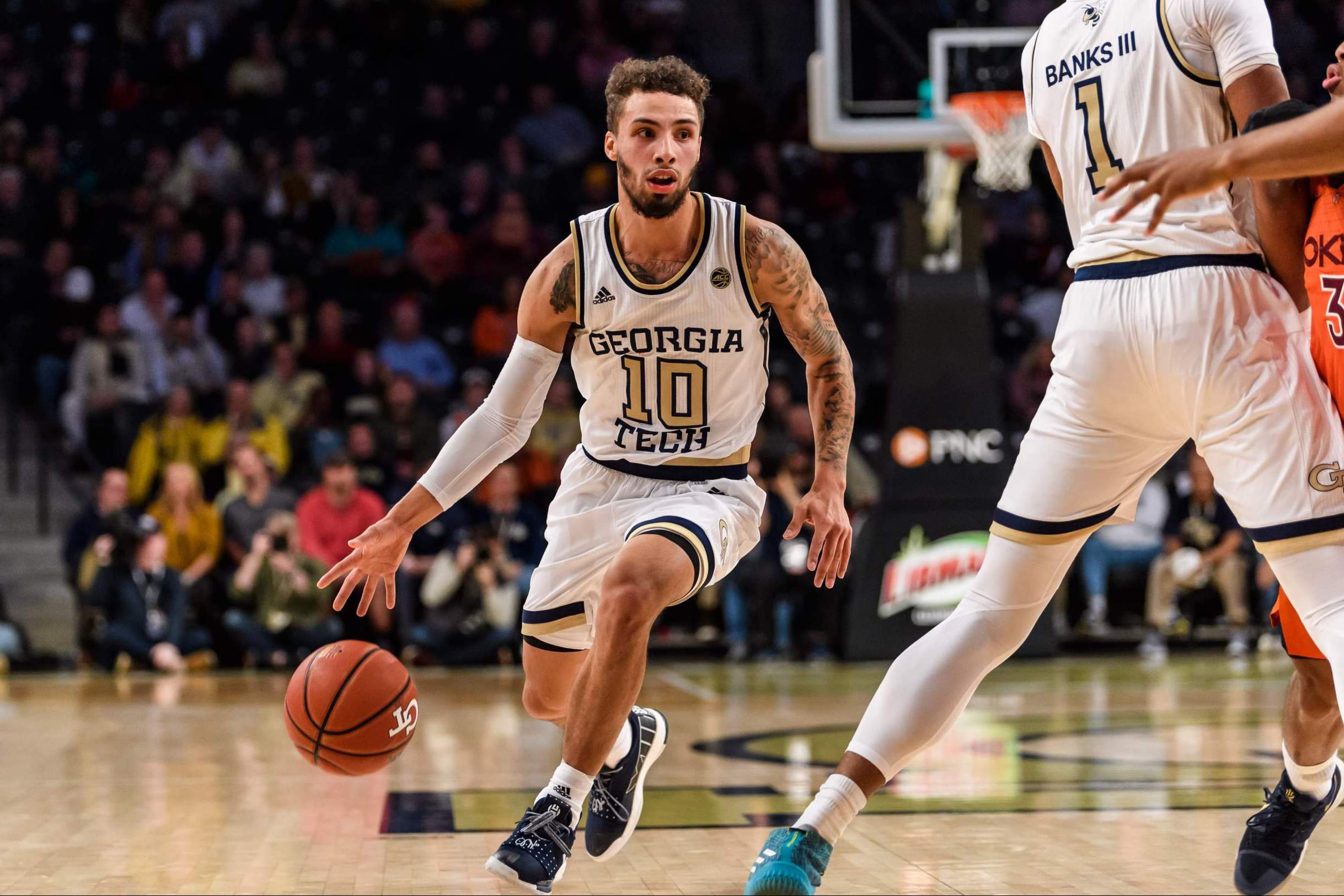 Jose Alvarado gets his homecoming.  Sort of.

The Yellow Jackets’ sophomore missed his chance to play in his native Brooklyn last year when a fractured elbow ended his season before the ACC Tournament.  He’ll get a close enough facsimile at Syracuse, about a four-hour drive from his home borough.  Alvarado told me an uncle, aunts, and a host of cousins plan on making the caravan to the Carrier Dome to watch him play for the first time as a Yellow Jacket.

While he didn’t score over the last 14:55 against Virginia Tech, Alvarado’s 17-point flurry in the first half held the Yellow Jackets’ offense together.  The 6-foot guard will now try to generate quality looks against Syracuse’s length (at 79.3 inches, the Orange have the tallest average team in the country according to KenPom).  Though he only shot 1-of-8 last year, Pastner praised his ability to control the tempo and play turnover-free against Syracuse’s zone.

Jim Boeheim’s pride and joy once again has teeth, helping Syracuse rank 12th nationally in defensive efficiency.  The Yellow Jackets have to be assertive swinging the ball, making the “plus-one” pass, and avoiding the baseline traps that Syracuse’s zone can create.  A sneaky stat from last year:  Syracuse only managed three steals against Georgia Tech, less than half its ACC average.

While three-point shooting is the accepted hack for a 2-3 zone, don’t neglect Georgia Tech’s play in the high post, either.  Ben Lammers and Tadric Jackson were a formidable high-low tandem last year, with Lammers often feeding Jackson for midrange shots from the baseline.  James Banks’ improved passing from the high post could determine whether Georgia Tech plays with the pace and patience needed to get open looks.

Syracuse has recently moved Marek Dolezaj, a 6-10, 180-pound forward, into the starting center spot.  What he lacks in mass, he makes up in hustle and mobility (Syracuse is 4-0 after inserting Dolezaj into the starting lineup).  After being bothered by Virginia Tech’s swarming, small-ball double teams, can Banks thrive against a more traditional big?  And can the Yellow Jackets continue to hunt for shots in secondary transition, before the Orange gets its defense set?

It seems counterintuitive for a team that even Josh Pastner confesses isn’t gifted offensively.  A team that struggles to shoot, not making a concerted effort to go after offensive rebounds?

Yet recently, Pastner has sacrificed sending bodies to the boards in favor of tightening up Georgia Tech’s transition defense.

Could Syracuse challenge those priorities?  For all their length, the Orange rank 14th in the ACC in defensive rebounding percentage (29.9 percent).  And in Georgia Tech’s marquee win of the season, a 69-65 road win at Arkansas, the Jackets posted their best offensive rebounding percentage of the season (45.5 pct.).  Will the Jackets pound the glass more?  Or will they stay faithful to shutting down open-floor opportunities for the Orange?

You never know what you’ll find when you dust off your old play-by-play charts.  When Georgia Tech faced Syracuse last January, the Orange ranked 11th in the nation in defensive efficiency; shot 42.8 percent from the field; and allowed 37.9 percent shooting.

Heading into this year’s matchup, the Orange ranks 12th in the nation in defensive efficiency; shoots 42.8 percent from the field; and allows 38.0 percent shooting.

Now that we’re prepared, we hope you are as well.  Join us for pregame coverage starting at 5:30 p.m. ET on the Georgia Tech IMG Sports Network.  See you in Syracuse.