Inside The Chart: Steel in His Blood

The junior from Fort Valley, Ga., is a cousin of Greg Lloyd, the five-time former Pro Bowl linebacker for the Pittsburgh Steelers (1988-97). A member of the famed “Blitz-burgh” defenses of the 1990’s, Lloyd was inducted into the Steelers’ Hall of Honor in late September. His fierce hits and fiery play earned him the nickname “Just Plain Nasty” from Steelers fans, a mythology that was on full display on Jackson’s wall growing up.

“I actually had that ‘Just Plain Nasty’ – I think the fans had it on a board somewhere – I had a poster [of it] in my room,” Jackson recalls.

Lloyd’s play, he added, “represents everything that this game means to me: toughness, grit, getting to that quarterback, and making plays. I guess it just rolled down to me and I wanted to be like him.”

So does that same malevolence live on in Jackson? He did nickname himself “The Menace” after his freshman year and still uses that mantle in most of his social media bios, but let’s be honest. NFL Films once dubbed Lloyd the “toughest man in the NFL.” A Sports Illustrated profile in 1996 described him as a “snarling headhunter” with a “consuming need to inflict pain on quarterbacks.”

“Quez gets very nasty. He gets very vicious. And I might be a little nastier than Greg was,” Jackson said.

He paused.  “He probably wouldn’t agree.”

“We’re not going to go there,” Greg Lloyd laughed.

Lloyd, now 55, was told of his cousin’s boast after a day of buck hunting in the woods last month. He may not agree with Jackson’s assessment, but the three-time first-team All-Pro did offer a caveat.

“If you think you’re nasty, and you play that way, that’s all that matters,” he said.

Jackson’s numbers would seem to confirm that. And both his bloodlines and stat lines may be enough to draw a shudder from fans of Georgia Tech’s next opponent. 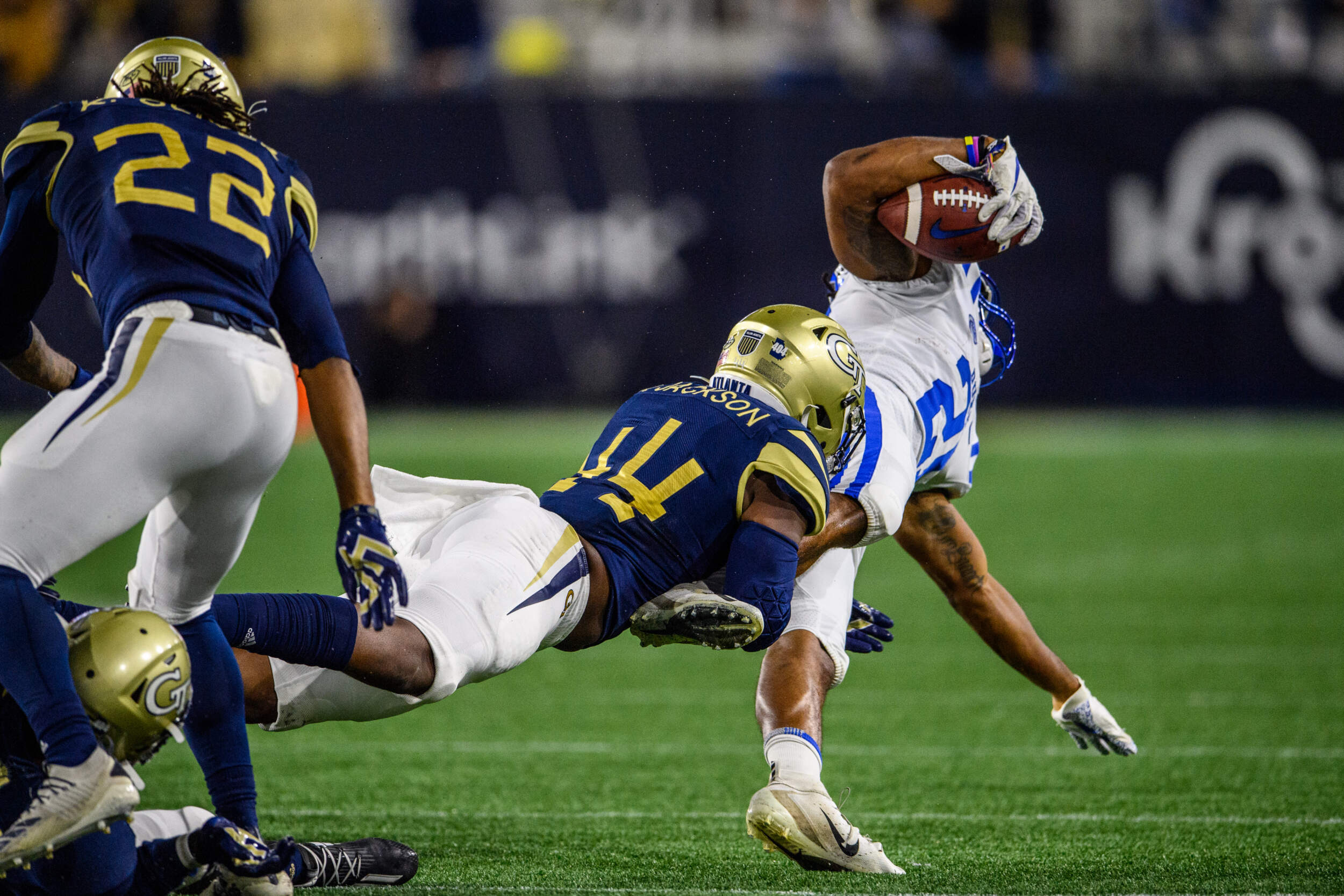 As the Yellow Jackets prepare to face Pittsburgh in the home finale at Bobby Dodd Stadium (7 p.m. ET, Georgia Tech Sports Network from Learfield IMG College), the 6-1, 225-pounder is tied for the team with 70 tackles. He and teammate David Curry are tied for eighth in the ACC in tackles per game (7.8/g).

“He’s plugged in at our ‘Willy’ backer position, which over time has been a very productive player in our defense at the last places we’ve been at in this scheme. JaQuez is stepping into that high-profile role and he’s capitalizing on it. We do a lot of things to make sure that position is free,” said head coach Geoff Collins.

That productivity pleases Lloyd, who dispensed some straightforward advice to Jackson as he learned the position growing up.

Jackson says he attributes his increased production to several factors. He has better instincts, sharpened through better study in the film room. He admits to shedding some of the stubbornness that followed him to Tech.

“Coming in, you always have your own idea of things. You’re familiar with a certain type of way to get the job done. But man … the coaches [have] taught me about leverage tackling and how I can get better as a tackler, as a blitzer, as a man coverage guy, all those types of things. I really honored that. I wanted to be the best I could be here,” he explained.

He also credits Curry, Tech’s sixth-year senior, who led the Yellow Jackets in tackles last season. The Buford, Ga., native – himself the son of an NFL linebacker – has long been one of the most respected, rock-solid leaders in the Georgia Tech locker room, a veteran of 30 consecutive starts dating back to 2018.

Watching his preparation up close, Jackson says, has left a lasting impression on him.

“When I see David come in here and how he works every day, that makes me want to go. He knows that he has a responsibility out here. When the young guys see that, we fall behind that,” he explained.

And yes, Jackson has tapped into his family connections for some linebacking lessons too. In addition to sharing a high school alma mater – they both starred at Peach County, 100 miles south of Atlanta – Jackson and Greg Lloyd have near-identical body types. Lloyd stood 6-2 and weighed 225 pounds during his playing days; Jackson stands 6-1 and weighs 225 pounds. Throughout his career, Jackson says Lloyd has given him tips on footwork and how to use his hands to disengage from blocks. He specifically remembers a lesson he gave him on how to “block and shed,” where a defender gains control of his blocker before escaping to find the ball carrier. He recalls using the maneuver on one of his team-high nine tackles against UCF September 19.

“My thing with him was, if you can work on your foot speed and you can work on your hands at the same time, you can take these 300-pound guys when they’re coming out there with a six-inch blow and put them on their rear end. And you don’t have to be lifting 400, 500 pounds in the weight room. Everything is technique,” said Lloyd, who’s also a sixth-degree black belt. He says he’s encouraged Jackson to find a martial arts studio to work on his hand-fighting skills (he hasn’t bitten – yet).

Jackson and the Jackets now turn their attention to Pitt (5-5, 4-5 ACC), the team from the city where Lloyd earned his greatest acclaim. After battling with an undermanned defense against NC State last weekend, the Jackets will look to for a fourth ACC win in their home finale.

And if they do? Take it from the man with the brash, big-hitting bloodlines. The results could be Just Plain Nasty.