Inside The Chart – Pittsburgh

They’ve downed their protein shakes, tipped back their beetroot shots, and worked out their muscles with the rat-a-tat of their Theraguns.

Another short turnaround awaits Georgia Tech (9-8, 5-6 ACC) this Sunday at McCamish Pavilion.  But more than foam rollers or fluids, the biggest recovery tool the Yellow Jackets may need is amnesia.

Gut-wrenching as Friday’s loss to Clemson was, it can’t stop Tech in its tracks.  Not with another fresh team in Pittsburgh (9-6, 5-5 ACC) coming to town, looking to gain ground in the ACC standings.  The heartbreak from that game needs to be flushed out as quickly as the lactic acid in their legs.

The Yellow Jackets have shown their resilience before.  They’ll have the McCamish crowd and a four-game home win streak over the Panthers to propel them.  A “fight, scratch, kick, claw” game, in the words of Josh Pastner, may be in order.  But if they can summon the resolve, not just to beat Pitt but the anguish that so often lingers after a game like Friday, the Jackets may have one heck of a protein shake toast afterwards.

Enjoy the top notes from my chart as Tech and Pitt go head-to-head for the first time this season (4 p.m. ET, Georgia Tech Sports Network from Learfield IMG College): 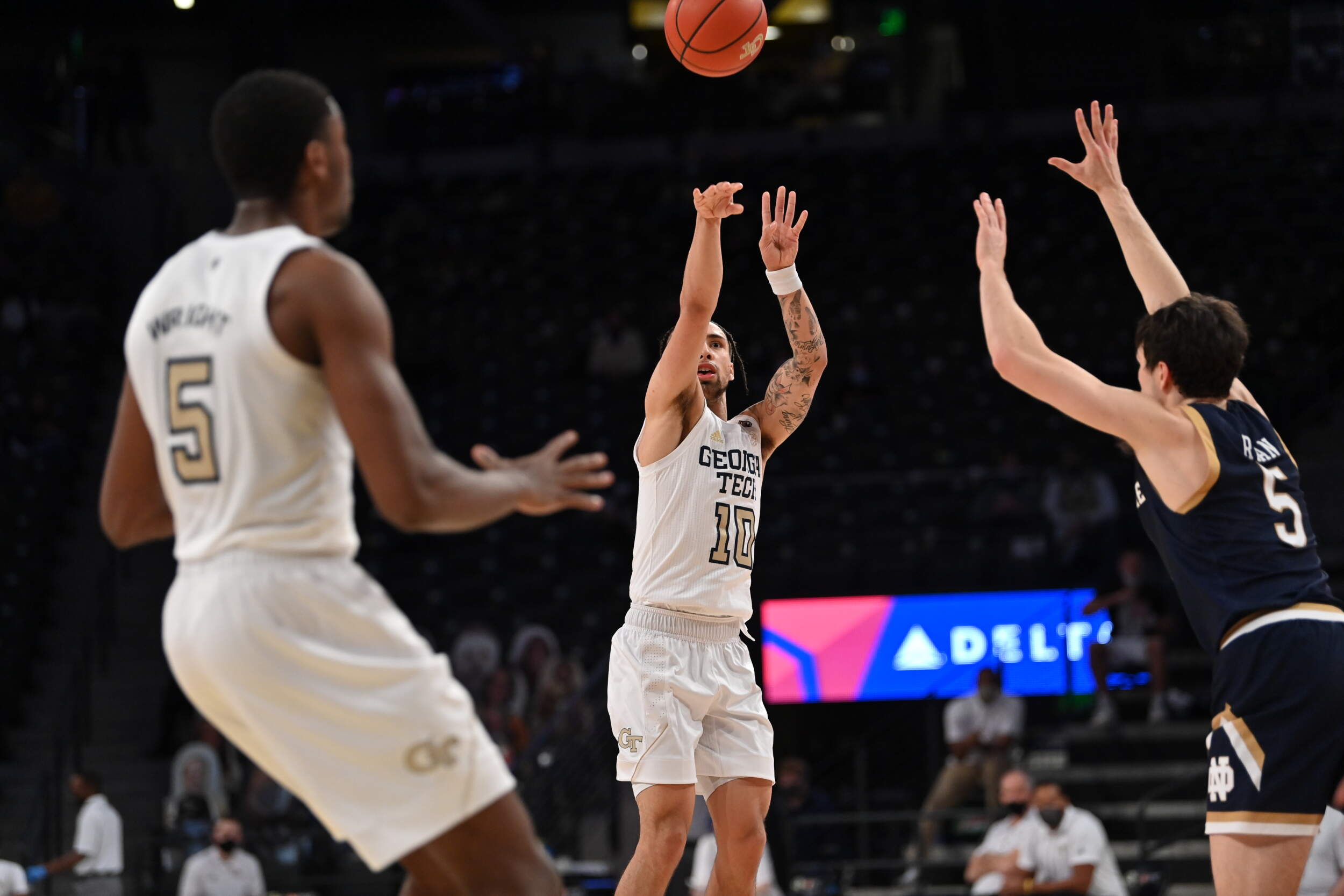 Jose Alvarado and Pitt sophomore Justin Champagnie are both on the Naismith Trophy’s Midseason Top 30 team. (photo by Danny Karnik)

They played at Bishop Loughlin and Christ The King, rival high schools in their native Brooklyn.  They squared off against each other in their conference tournament in 2017, with Bishop Loughlin pulling out the win in double overtime.

And now, Georgia Tech’s Jose Alvarado and Pitt’s Justin Champagnie have reunited as leading candidates for ACC Player of the Year and members of the Naismith Trophy Midseason top 30 team.  A 6-6, 200-pound sophomore, Champagnie leads the ACC in both scoring (19.2) and rebounding (12.0).  He’s a fluid inside-out scorer and a bouncy offensive rebounder, with a game Josh Pastner compares to the Charlotte Hornets’ Mikal Bridges.

Georgia Tech first got a taste of his potential last year when he dropped 30 points and grabbed nine rebounds in a win over the Jackets at the Petersen Events Center.  Along with point guard Xavier Johnson (14.2 ppg) and combo guard Au’Diese Toney (14.1 ppg), they form the highest-scoring trio in the ACC, with a workload similar to Tech’s big three:

In addition to his scoring prowess, Johnson, a godbrother of former Tech great Marcus Georges-Hunt, leads the ACC in assists (6.2 apg).  He also leads the ACC in Usage Rate – 28% of the Panthers’ possessions ends with Johnson either making a shot, missing a shot that isn’t rebounded by his teammates, or committing a turnover.  The 6-5 Toney gives Pitt a long-armed, crafty finisher in the lane.

Pitt’s offense thrives on getting downhill, often using side ball screens to isolate its ballhandlers.  They’re also good at following their own misses (Champagnie leads the ACC in offensive rebounds).  Georgia Tech struggled to keep Louisville off the offensive glass on a short turnaround earlier this year.  It may cut into their ability to get in transition, but gang rebounding could be vital Sunday.

Champagnie was one of three ACC players named to the Naismith Defensive Player of the Year Watch List last week.  So was Clemson’s Aamir Simms and Virginia’s Kihei Clark.

Jose Alvarado, who ranked third in the nation in steals entering the weekend, was not one of them. 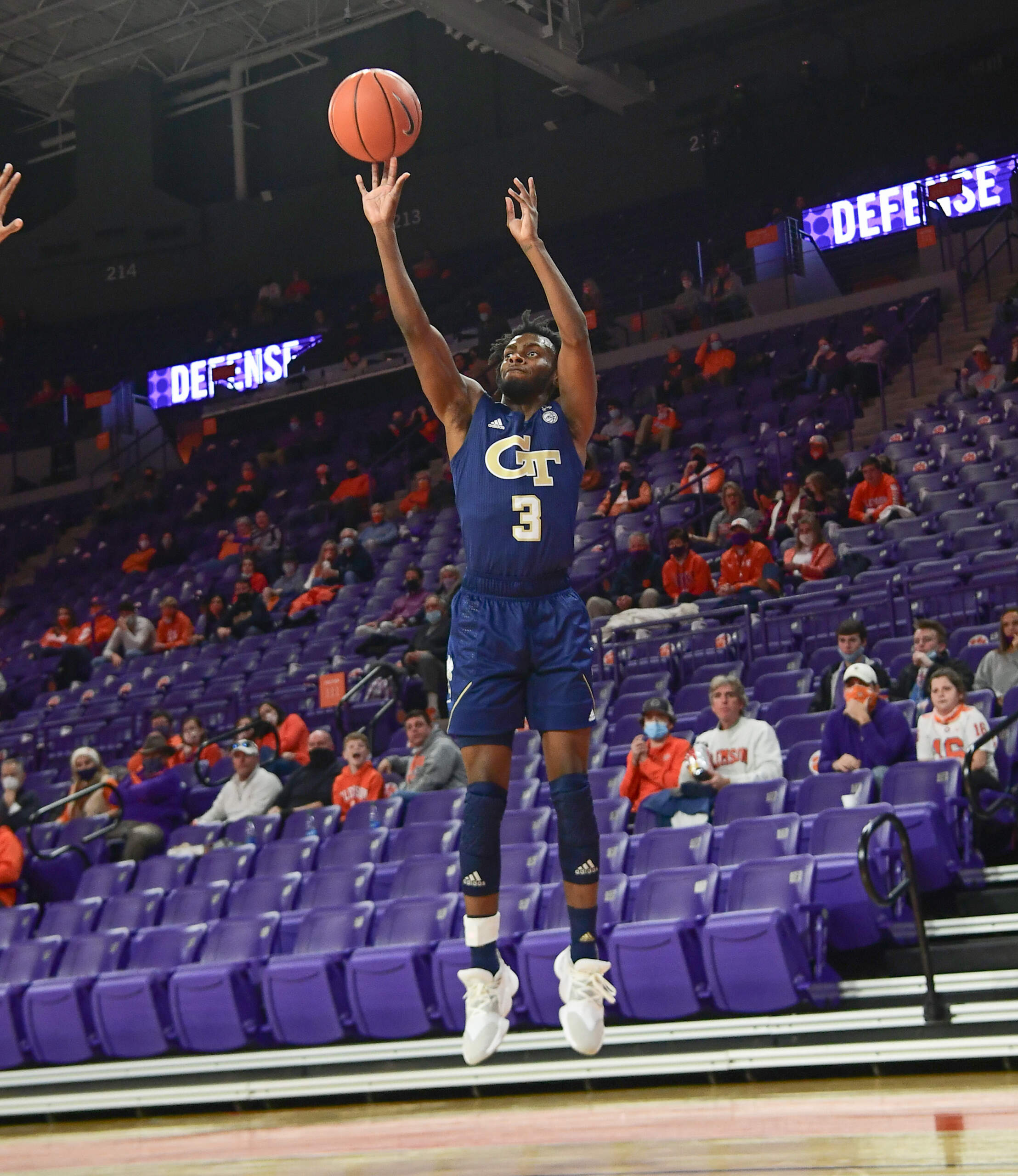 Pitt guard Ithiel Horton is the nephew of former Tech Hall of Famer Lenny Horton (1976-80).  The 6-7 forward from Vauxhall, N.J., led Tech in rebounding his last three seasons, and also played on Georgia Tech’s inaugural ACC team as a senior.  Horton still ranks 19th in school history in career points (1,411), though Alvarado only trails him by 87 points.  His nephew, a transfer from Delaware, plays a slightly different game:  Ithiel Horton leads Pitt in three-pointers.

Pittsburgh ranks third in the ACC in three-point defense (31.5 percent), but the Panthers can be prone to some wild swings.  Pay attention to this barometric number for Sunday:

Pitt plays a high-leverage style of perimeter defense, not afraid to extend up the floor and disrupt passing lanes.  That aggressiveness could lead to open looks for the Jackets, who have only shot 30.2 percent from three over their last six games.  And worth noting as he looks for a rebound performance: in his last two home games against Pittsburgh, Jose Alvarado has averaged 26.0 points, 7.0 rebounds and 5.0 assists.  That included a career-high 29 against the Panthers as a sophomore.

Parham’s second highest-scoring game versus an ACC school?  The second game of his sophomore year at VMI – when he dropped 16 against Pittsburgh at the Petersen Events Center.