It manifested itself in late close-outs and 50-50 balls that forever seemed out of reach.  It showed up in a season-low 32-percent shooting rate and a season-high 20 offensive rebounds allowed.  Their leading scorer was held to seven points.  Instead of their usual strong start to the second half, they gave up a 14-2 run.

Wherever Georgia Tech found itself Monday, it felt like the Yellow Jackets were playing in quicksand.  A quick turnaround and a tough Louisville team proved too much for Tech (8-6, 4-4 ACC) in a 74-58 road loss, making for a frustrating, fatigue-filled follow-up to their win over No. 16 Florida State.

The grind begins again Saturday when Tech faces suddenly surging Notre Dame (7-9, 4-6 ACC) to kick off an 11-day, 5-game gauntlet.  The Irish have won four of their last five by an average of 17.7 points, but the Jackets hope the extra rest – and the McCamish Pavilion home floor – can get that gauntlet started right.  Enjoy the top notes from my chart as Georgia Tech tries to extend a school-record 10-game ACC home win streak against the Fighting Irish (8 p.m. ET, Georgia Tech Sports Network from Learfield IMG College):

Georgia Tech has dropped four straight to the Irish, including one of its last losses at McCamish last season.  So why has Notre Dame been such a vexing matchup lately?  The Irish shoot a high volume of threes and rarely turn the ball over, a pair of annual staples under 21st-year head coach Mike Brey.  Georgia Tech, on the other hand, has relied substantially on two-point field goals and has had issues committing turnovers.

The result has been a “possession gap” that’s been hard to overcome.  Factoring in tempo, Notre Dame generally gains 6-7 extra possessions per game off Georgia Tech’s turnovers.  Combine that with the Irish’s normal snappy offensive efficiency, and the extra value-weight given to three-pointers, and the Yellow Jackets have struggled to trade blows.

Yet look at the rise in Georgia Tech’s three-point rate – i.e., the percentage of its field goal attempts that come from three –  compared to previous seasons under Josh Pastner:

Now look at Georgia Tech’s decline in turnover percentage – i.e., the percentage of its offensive possessions that end in a turnover:

On a per-possession basis, Georgia Tech is shooting a substantially higher rate of threes, and committing a substantially lower rate of turnovers, than at any point in the Josh Pastner era.  Will that make them better suited to subverting Notre Dame’s style Saturday?  The Jackets will need to shrug off their recent cold snap from three (30.7 percent over the last three games), but the trend lines suggest they can.

The extra rest did him wonders.  Showing burst and bounce on both ends of the floor, Wright finished with 15 points, 16 rebounds and a career-high seven blocks against the Cardinals.  In doing so, he became the first ACC player with a 15-15-7 stat line since John Henson did it for North Carolina on Jan. 29, 2011.  He’s also the only player who ranks in the top 5 in the ACC in both steals (2.00/g) and blocks (1.97/g).

In fact, Wright is the only player who ranks in the top 15 in the ACC in both categories. 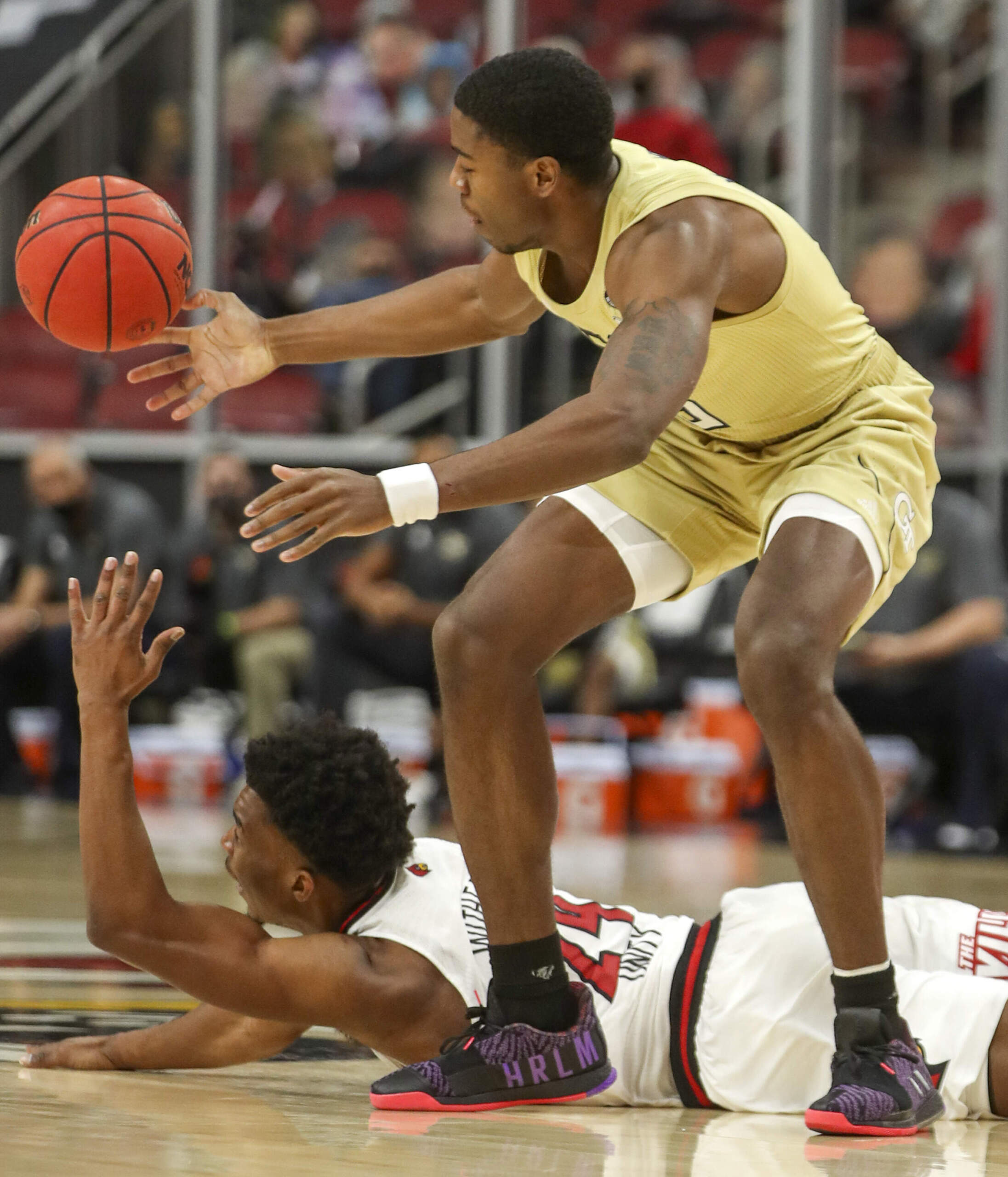 Moses Wright is the only player in the ACC to rank among the top 5 in steals and blocked shots. (photo by Danny Karnik)

It may be too much to ask him duplicate a once-in-a-decade stat line, but Wright’s recent splits against Notre Dame have been impressive:

Notre Dame no longer has double-double machine John Mooney, but 6-11 Juwan Durham gives the Irish a rangy pick-and-roll threat who also has touch from the short corner and elbows (Mooney was more of a pick-and-pop and pick-and-post guy).  In many ways Durham has been an underlying key to Notre Dame’s resurgence:

Can Wright neutralize Durham when they both play the “5” Saturday?  It’s a matchup worth watching.

Jose Alvarado’s streak of consecutive games with a made three-pointer came was in dire straits Monday until the senior drilled a corner three with 1:08 to play.  He now enters the Notre Dame game on a streak of 32 straight games with a three.

Dennis Scott still holds the school and ACC records with a made three in 69 straight games.  His streak came to an end February 7, 1990… at Louisville.

When Josh Pastner recruited Jupiter, Fla., native Nate Laszewski out of high school, he felt far more confident in his evaluation skills than his pronunciation skills.

“I could never pronounce his last name,” Pastner joked.  “I just called him ‘Nate L.’”

(That’s a feature, not a bug.  Pastner has a well-documented history of phonetic misadventures with players’ last names.  He’s already bypassed “Gigiberia” and simply refers to his freshman forward as “Saba G.”)

One of the most improved players in the ACC, the 6-10 Laszewski is averaging 14.8 points and 8.2 rebounds on a conference-leading 50.9 percent from three.  When Notre Dame plays him at the “5” he can be a particularly tricky matchup, able to run off picks or set “ghost screens” to get sneaky dive-cuts to the rim.  He’s one of the cogs in a Notre Dame offense that runs plenty of four- and five-out motion, with players driving, kicking and re-attacking in search of open looks.

The Irish have revved up that system lately, shooting 54.7 percent from three in their last two road games.  In spite of their 4-6 ACC record, they still rank 21st nationally in offensive efficiency.  Pastner even invoked the Golden State Warriors – the “Splash Brothers” version, we presume – to describe their recent run of offense.  Watch out for 6-6 Dane Goodwin (14.7 ppg last 3 games vs. GT), a streaky swingman who thrives off drag screens but can also pull up at the elbow.  Can the Yellow Jackets close with high hands and win the 50-50 balls that eluded them against Louisville?

Now that we’re prepared, we hope you are as well.  Join us for pregame coverage starting at 7:30 p.m. ET on the Georgia Tech Sports Network from Learfield IMG College.  See you at McCamish!