Inside The Chart – North Carolina

In an ordinary year, coaches like to squeeze in one last non-conference game after the holiday break. Often they schedule it against a lightly regarded low- or mid-major, at home, in a matchup with little to no suspense.  Players get a chance to knock off the rust, get back in rhythm, and in some cases, clear the calories from a visit back home.  Coaches get a last chance to workshop some plays and lineups before the grind of conference play returns.

There won’t be any easing back for Georgia Tech (4-3, 0-1 ACC) as it returns from a longer-than-expected 10-day hiatus.  Their first game back brings in North Carolina (5-3, 0-1 ACC) to McCamish Pavilion in a matchup of teams looking to avoid 0-2 conference starts.  North Carolina will also look to avenge a stunning loss to the Yellow Jackets last year, where Tech roared out to a 27-4 lead and shot 59 percent en route to a 96-83 win in Chapel Hill.

If you couldn’t already tell:  break’s over.  Time to get back to work. 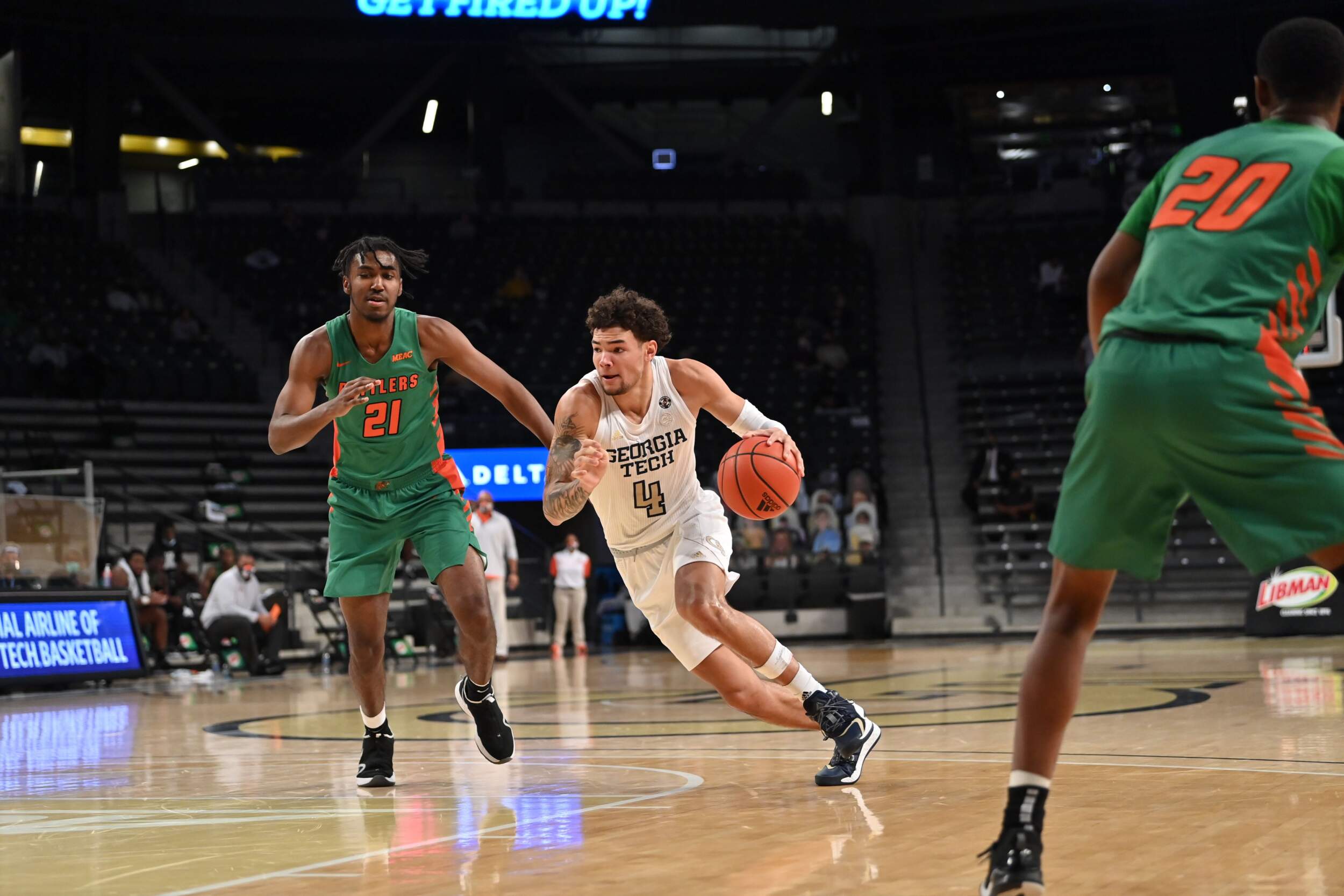 Georgia Tech has scaled down its lineup lately, using Bubba Parham as a third guard and jettisoning a traditional “5” man.  They’ve also moved 6-7 Jordan Usher or 6-7 Khalid Moore to the “5” when 6-9 Moses Wright is on the bench.

Conventional wisdom says a small lineup makes a team more vulnerable to blocked shots.  Yet in its first three games after “sizing down,” Georgia Tech was only blocked once apiece by Kentucky, Nebraska and Florida State.

Why is that significant?  All three teams rank in the top 25 nationally in average height.  North Carolina ranks eighth.

N.C. State used a smaller lineup against UNC December 22 and had success spreading out and dribble-driving the Tar Heels.  It spurred the Wolfpack to a 17-point first-half lead, which allowed them to withstand several rallies in a 79-76 win.  It also continued a troubling trend of the Tar Heels giving up big early deficits (they’ve trailed by double digits in the first half in six of their first eight games).

Can the Jackets use sharp cutting and quick ball reversals to get clean looks and clear driving lanes against North Carolina’s length?  And can they shake any post-holiday rust quickly and pin the Tar Heels with another early deficit?

Jose Alvarado led Tech in assists, steals, and points in ACC play last year.  He also led the Yellow Jackets in most friends and family members who came to see him play on the road.

Rarely did the Yellow Jackets play a road game without Alvarado bringing his own enthusiastic cheering section.  Such was the case in Chapel Hill last year, when they watched Alvarado finish with 25 points, 8 assists and 6 steals for Tech’s first win at the Smith Center since 2010.  Among the well-wishers was one of his youth league coaches from New York City, who first started coaching him in sixth grade.

The only problem:  he came to the game wearing North Carolina gear.  Alvarado sheepishly explained that his coach was a UNC fan growing up, though he still showed plenty of love to his former player that night.

Coming off a career high-tying 29 points against Delaware State, Alvarado and Michael Devoe will duel with an all-freshman backcourt consisting of McDonald’s All-Americans Caleb Love (11.1 ppg) and R.J. Davis (10.1 ppg).  Love is a dynamic finisher around the rim who’s trying to pull himself out of a season-long shooting slump; Davis, like Alvarado a product of New York City Catholic league basketball, was named by Lindy’s as the best freshman shooter in the ACC.  Both labored in UNC’s loss to N.C. State (8-28 FG combined).  They’re not the only ones who have struggled: North Carolina is making just 25.6 percent of its threes, which ranks No. 316 in the country.

Tech’s guards already frazzled one young backcourt in Kentucky, forcing them into turnovers, tentative decisions, and out-of-system jump shots.  Can they do it again against a North Carolina backcourt that’s been heavily scrutinized and may be looking for a breakout game? 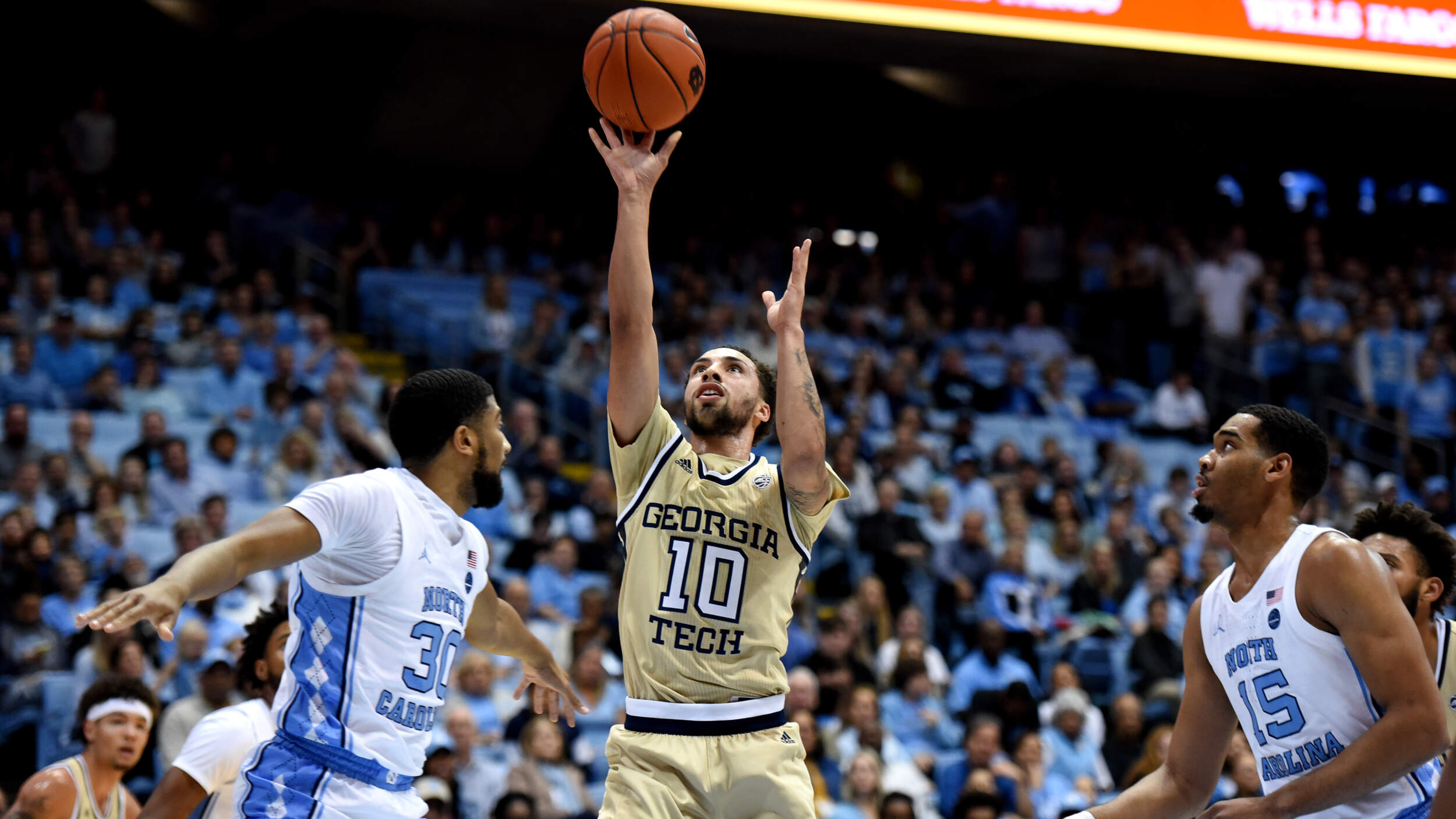 North Carolina may struggle from three, but they know how to clean up their own misses.

Roy Williams once again rolls out a frontcourt that can put teams in the wood chipper on the offensive glass:  the Tar Heels rank No. 2 nationally in offensive rebounding percentage (41.8 pct.).  Garrison Brooks, 6-11, the ACC’s preseason Player of the Year, had a career-high 35 points and 11 rebounds against the Yellow Jackets last year.  Armando Bacot, 6-10, who has led UNC in scoring in each of the last three games, can overpower defenders on stickbacks.  The Tar Heels also rotate a pair of freshmen off the bench in 6-11 Day’Ron Sharpe, an instinctive shot blocker, and 7-1 Atlanta native Walker Kessler.  Georgia Tech has found a niche with a smaller lineup, and Moses Wright had 22 points and 7 rebounds while playing extended stretches at the “5” last year, but Tech’s frontcourt can’t allow UNC to bury them deep or catch in their comfort zone.

Worth noting though:  in racing out to a 47-27 halftime lead in Chapel Hill last year, the Yellow Jackets didn’t allow North Carolina to score a single fast-break or second-chance point.  Josh Pastner has harped on defensive transition throughout the year, citing it as a key in our pregame interviews against Kentucky, Florida State and Georgia State.  North Carolina hunts for baskets in secondary transition as actively as any team in the ACC, including quick post-ups with its bigs.  How well can the Yellow Jackets limit those staples of North Carolina’s scoring Wednesday?

Now that we’re prepared, we hope you are as well.  Join us for pregame coverage starting at 7:30 p.m. ET on the Georgia Tech Sports Network from Learfield IMG College.  See you at McCamish.