Inside The Chart: No Props Needed

They haven’t needed a chain, or a belt, or a robe, or some other tchotchke to celebrate the occasion.  Georgia Tech hasn’t joined the “turnover prop” craze that has swept across college football the last two years. Their low turnover count has been motivation enough.

Not that they haven’t done some brainstorming.

“We definitely thought about it. I don’t think we could come to a decision on what to do,” said stinger Jalen Johnson (below). 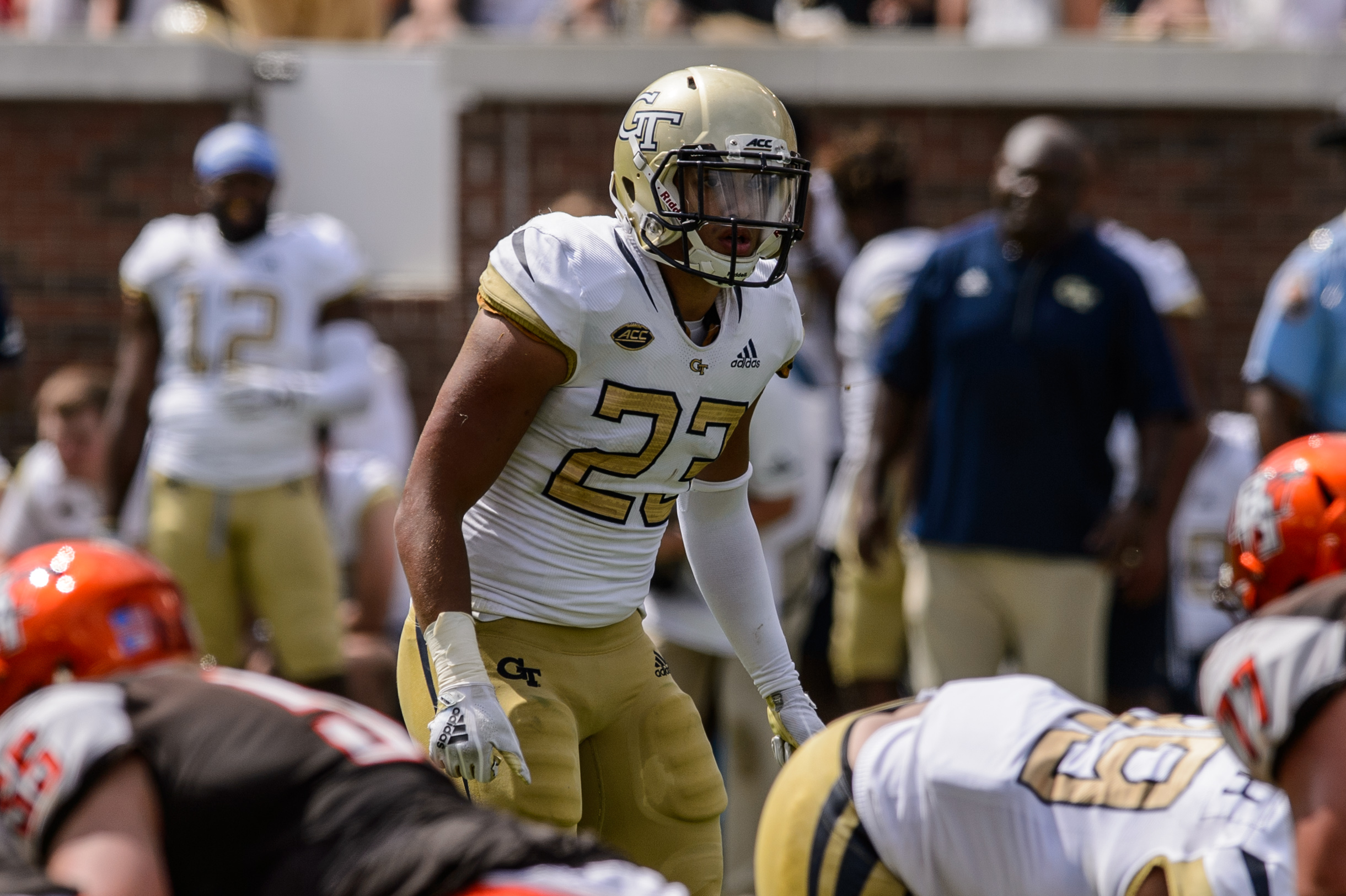 But now, after a disappointing last few seasons, Georgia Tech finds itself in the midst of a turnover turnaround. In their first season under new defensive coordinator Nate Woody, the Yellow Jackets have already doubled their turnover count from last year.

As they prepare to face Miami– they of the diamond-encrusted “turnover chain” and widely considered the pioneers of the turnover prop movement – the Yellow Jackets have no plans of slowing down.

“It’s electric. One guy gets a turnover, another guy wants to get one. It’s a happy feeling,” said senior Anree Saint-Amour, who contributed one of Tech’s three interceptions against North Carolina.

But why the uptick? There’s a certain amount of luck involved in forcing a turnover. A pass deflects off a receiver’s hands and into the hands of a defensive back. A ball takes a fortunate bounce toward a defender instead of away from him.

But luck alone doesn’t explain why Georgia Tech has gone from one of the worst turnover-forcing teams in the nation to one of the best. Head coach Paul Johnson says his team has gotten more pressure on opposing quarterbacks, leading to a spike in interceptions.

“We’re probably a little more aggressive, even though we haven’t blitzed a great deal. There are more guys upfield, more tackles for loss. I think, even though the sack numbers aren’t what we’d like, at times we’ve gotten more pressure on the quarterbacks,” Johnson said.

Interceptions, of course, were a trademark of Woody’s defenses at Appalachian State. Over the last three years, no team picked off more passes in the Football Bowl Subdivision than the Mountaineers.  But more than scheme, Georgia Tech players point to a simpler reason: they’ve been drilled by Woody since Day One to run to the football on every play.

Rallying to the ball has become their rallying cry.

That habit started in the spring, Jalen Johnson agreed. During practice, the punishment for players not running to the ball was running some more. 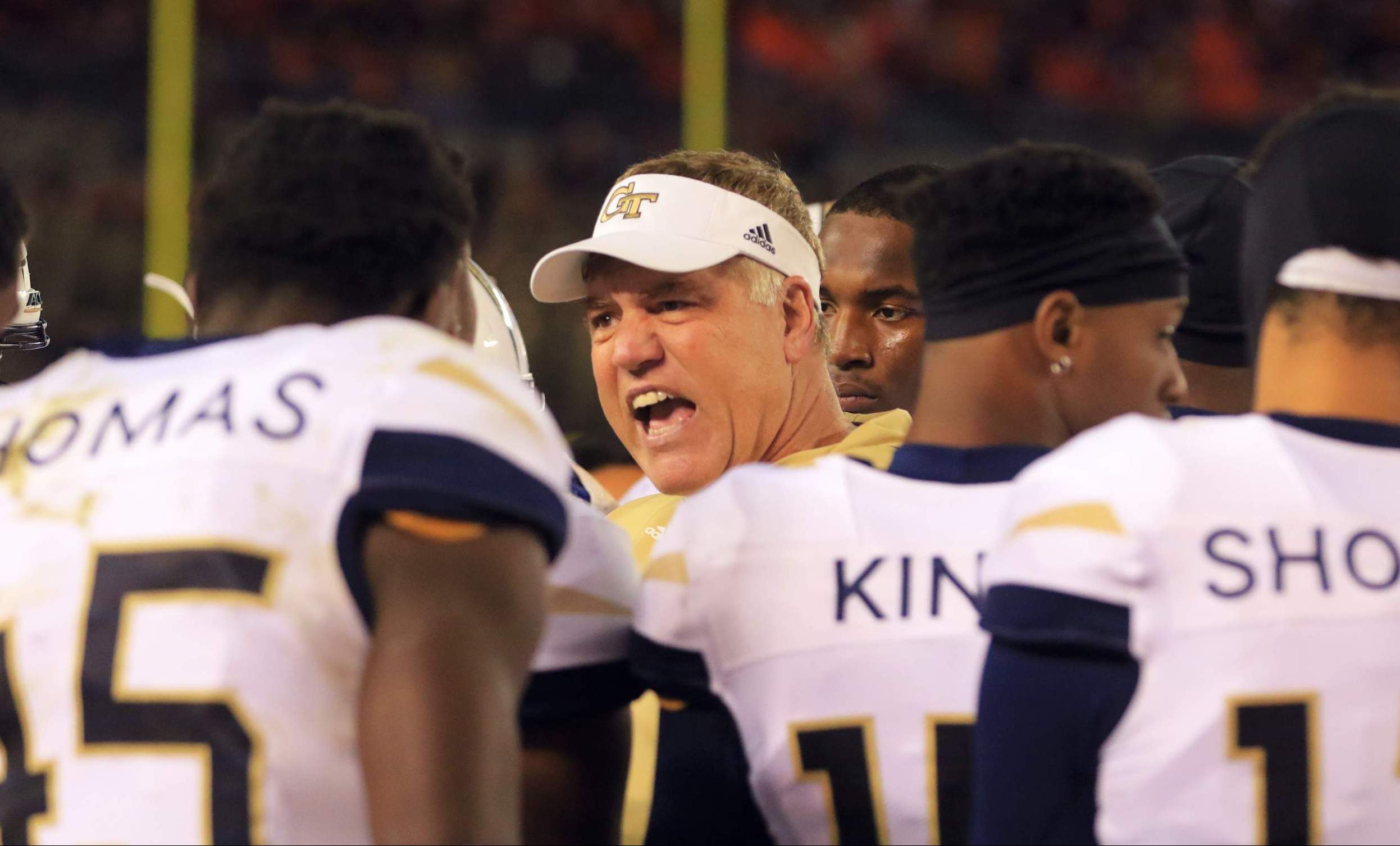 Simple as it sounds, that hard-charging mindset has paid dividends. The more players near a ball carrier or intended receiver, the more players who can jump on a tipped or fumbled ball, the more teammates who can jimmy the ball free after the initial defender slows him up.

“He had a couple picks where the ball’s been tipped up. Well if nobody’s at the ball to catch the tip, if you’re not giving that extra effort to run to the ball … That’s where turnovers are made,” Mitchell said.

As a result, Georgia Tech has sprung turnovers on teams that are usually loath to commit them. Duke only had three entering its game with the Yellow Jackets October 13, the third-lowest total in the nation.  Tech came away with three. North Carolina quarterback Nathan Elliott entered last Saturday’s game on a streak of 212-consecutive pass attempts with an interception, the second-longest stretch in school history. Georgia Tech picked him off three times.

Those turnovers have been crucial, especially with Georgia Tech struggling to get off the field on third down (the Yellow Jackets rank 124th nationally in third-down defense). And while they won’t break out a prop to commemorate each takeaway, if you look closely, there has been a talisman floating around the Georgia Tech sideline lately. As part of his pregame speech at Virginia Tech on October 25, student-athlete character coach Derrick Moore unsheathed a navy track and field relay baton in the locker room.

The message: offense, defense and special teams are all trying to win a race together. No one can cross the finish line without each “leg” doing its part.

The baton – Moore has since switched to a gold-colored one – re-emerged during the North Carolina game. The Yellow Jackets have wholeheartedly embraced the symbolism.

“D-Mo comes to the huddle and he holds it up. Whoever goes down and makes a big play, then they’re the one who gets it. And that makes us work even harder to get it,” added safety Juanyeh Thomas, who earned a “baton exchange” for a special-teams tackle against the Tar Heels.

And yes, the baton can be earned thanks to a turnover.

Call it a prop if you’d like. But the Yellow Jackets have far bigger incentives heading into Saturday’s Whiteout game against Miami at Bobby Dodd Stadium (7 p.m. ET, Georgia Tech IMG Sports Network).  They can secure bowl eligibility with a win. They can avenge a heartbreaking loss to the Hurricanes last year. They can continue to stay alive for an ACC Coastal title.

As the stakes grow, the Georgia Tech defense will try to keep the takeaways coming.