Inside The Chart – Miami

They head to Greensboro confident in their record, their body of work, and their six-game win streak.  They bring in the conference’s Player of the Year and Defensive Player of the Year.  But that doesn’t mean Georgia Tech is done trying to leave an impression.

The Yellow Jackets had worked so hard to build a résumé that has them in the NCAA Tournament picture.  Why stop now?  Even with a fourth-place finish and a double-bye for the ACC Tournament, why let a loss invite unwanted scrutiny?

Instead, as it prepares to make its postseason debut, Georgia Tech (15-8, 11-6 ACC) will try not to stray from the sharpness that earned them their highest seed for the conference tournament since 2004.  Awaiting them in the quarterfinals is an unexpected opponent: 13th-seed Miami (10-16, 4-15 ACC), which overcame a nine-point deficit to upset 5th-seed Clemson on Thursday.  The Hurricanes have won three in a row after dropping six straight, proving that while depleted, they’re far from defeated.

Loose teams with nothing to lose always make for tricky matchups come tournament time.  Can the Yellow Jackets stomp out any early friskiness from the suddenly rolling Hurricanes?  Can they dial up another fast start – like, say, the one they had in Coral Gables February 20, when they raced out to a 12-0 lead and smothered Miami 87-60?

The postseason starts Thursday.  Given its recent play, Georgia Tech may be more interested in a continuation than a fresh beginning.  Enjoy the top five notes from my chart as Tech dives into the postseason (2:30 p.m. ET, Georgia Tech Sports Network from Learfield IMG College):

Jose Alvarado is one of three ACC players who have scored 25 or more points in four ACC games this season. Moses Wright and Miami’s Isaiah Wong are the others. (photo by Danny Karnik)

It probably isn’t looked back on as fondly by Miami.

The Hurricanes only played with six scholarship players that day, a number that shrank to five after leading scorer Isaiah Wong sprained his ankle late in the first half.  They allowed a season-worst 57-percent shooting to the Jackets.  They had as many field goals in the first half (6) as Tech had three-pointers.

The Hurricanes still only have six scholarship players, but they also have a fully healthy Wong (17.3 ppg, 4.9 rpg), who was held to a season-low four points against Tech.  A third-team All-ACC pick, the 6-3 sophomore has scored 20 points in each of Miami’s ACC Tournament games.  He’s an attacking guard who can leverage defenders in the paint and also has a feathery touch from outside.

Along with Kameron McGusty (12.7) and Elijah Olaniyi (10.9 ppg), head coach Jim Larranaga has a solid nucleus of playmaking guards who can break down defenders one-on-one.  They also have a slick passer in the low post in 7-footer Nysier Brooks, who dished out several nifty assists against the Jackets.  Georgia Tech’s zone gave Miami problems last month, forcing their guards to settle for jumpers or take awkward, off-platform drives.  How heavily might Tech use those zones Thursday, especially against a team that isn’t proficient from three?  At 29.5 percent, Miami ranks last in the ACC in three-point percentage.

Another wrinkle worth watching:  Miami will be playing its third game in as many days, but they’ve also shot twice at Greensboro Coliseum.  Georgia Tech’s first time shooting there will be during pregame warmups.  Unlike a typical neutral site game, they didn’t have access to the court for shootaround or practice.  How long may it take for Tech to get adjusted to the backdrop at Greensboro Coliseum – and how much could that neutralize their advantage in freshness over the Hurricanes?

Only three ACC players had four conference games with at least 25 points.

All three of them will be in action Thursday (Wong, Moses Wright, Jose Alvarado). 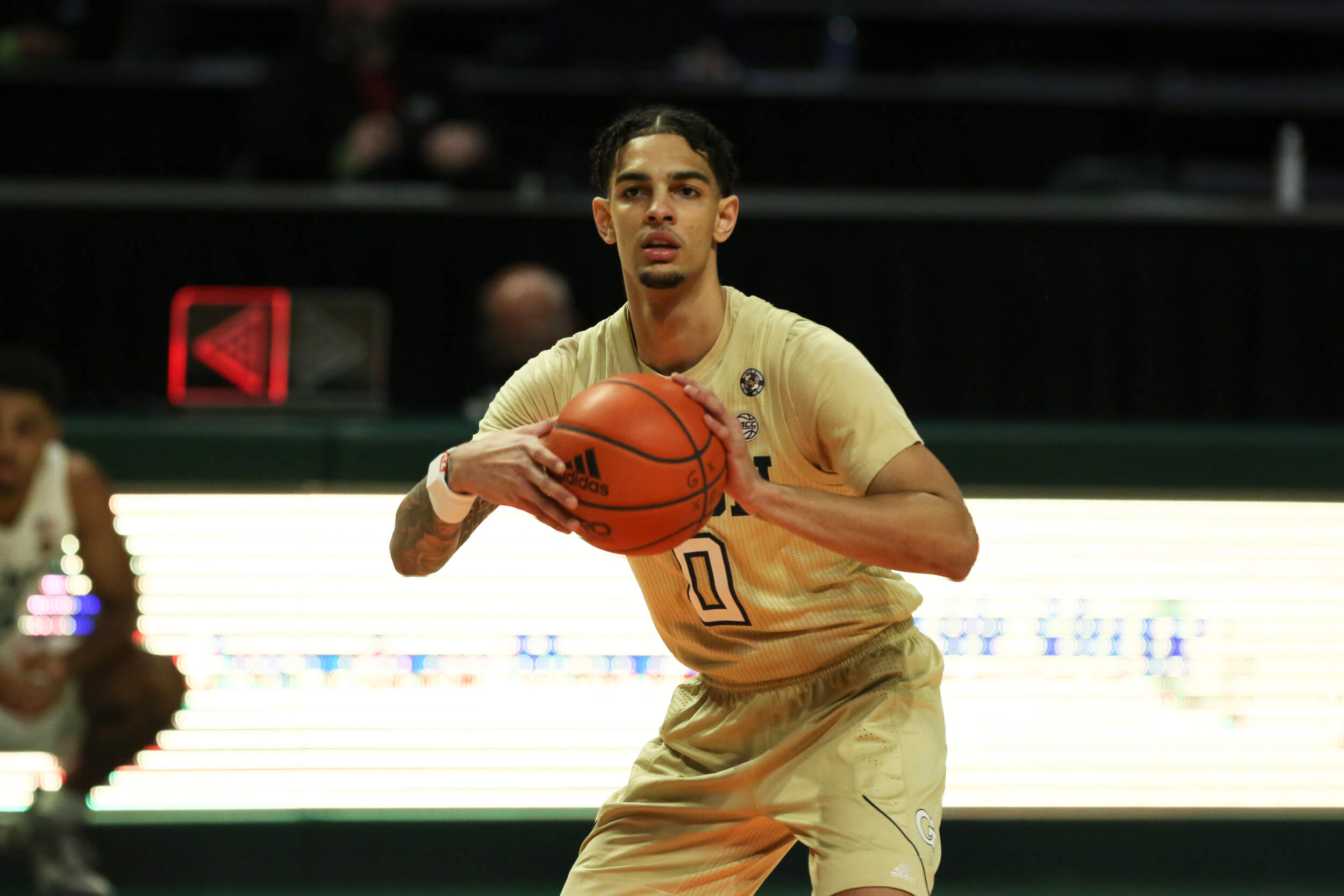 Michael Devoe broke out a new hairdo for Tech’s game at Miami, but the talk became his 29 points and a career-high seven 3-pointers after the game. (photo by Sam Navarro)

A freshly-braided Michael Devoe lit up Miami for 29 points and a career-high 7 three-pointers when the Yellow Jackets and Hurricanes met last month.  But the junior didn’t even have the best offensive rating on the team that day.

That belonged to Alvarado, who finished with 16 points (6-8 FG) and dished out six assists.  He was terrific in the pick-and-roll, orchestrating a Tech offense that finished with 10 dunks.  The Jackets’ 67.6-percent shooting from two-point range was their second highest average of the season.  Expect the Hurricanes to make some adjustments to their pick-and-roll coverage.

Tech’s best offense against Wake Forest came when they isolated guards on dribble-drives from the top of the key.  Miami likes to play passing lanes, but it also commits the fewest fouls in the nation and rarely gives up free throw trips (they rank second in the nation in Opponent Free Throw Rate).  Can the Jackets continue to be assertive on the ball and hunt for the “plus-one” passes that led to so much success in Coral Gables?  Pay attention to Jordan Usher, who has quietly averaged 15.7 points on 58-percent field goal shooting over his last three games.

Like the rest of his teammates, Bubba Parham didn’t have a chance to showcase himself at the ACC Tournament last year.  Thursday’s game will mark the senior’s first conference tournament since his sophomore year at VMI, when he scored a career-high 41 points in a win over Western Carolina at the 2019 Southern Conference Tournament in Asheville.

Georgia Tech has stayed in Greensboro since Friday, opting to bunker down (and bubble up) rather than head back to Atlanta following its win over Wake Forest.  The schedule makers gave them some help in that regard:  Georgia Tech finished the ACC regular season with a road game at Wake Forest for the first time since 1980, the Yellow Jackets’ first year in the league.

Now that we’re prepared, we hope you are as well.  Join us for pregame coverage starting at 2 p.m. ET on the Georgia Tech Sports Network from Learfield IMG College.  See you in Greensboro.