Inside The Chart – Miami

After a devastating loss to Clemson, Georgia Tech showed its fortitude Sunday with a gutty win over Pittsburgh.  Short rest or not, the Yellow Jackets had hoped to capitalize on it Wednesday against Boston College, but a positive COVID-19 test within the Eagles program scuttled those plans.

Georgia Tech (10-8, 6-6 ACC) will instead have to regain its momentum at Miami (7-12, 3-13 ACC), where the Jackets haven’t won since 2015.  With the schedule dwindling, Tech knows its opportunities to gain ground, both in the ACC and NET rankings, are becoming scarce.  It will take a sharp, concentrated effort against a Hurricanes team that put a scare into the Jackets last year and could also be regaining their top player. 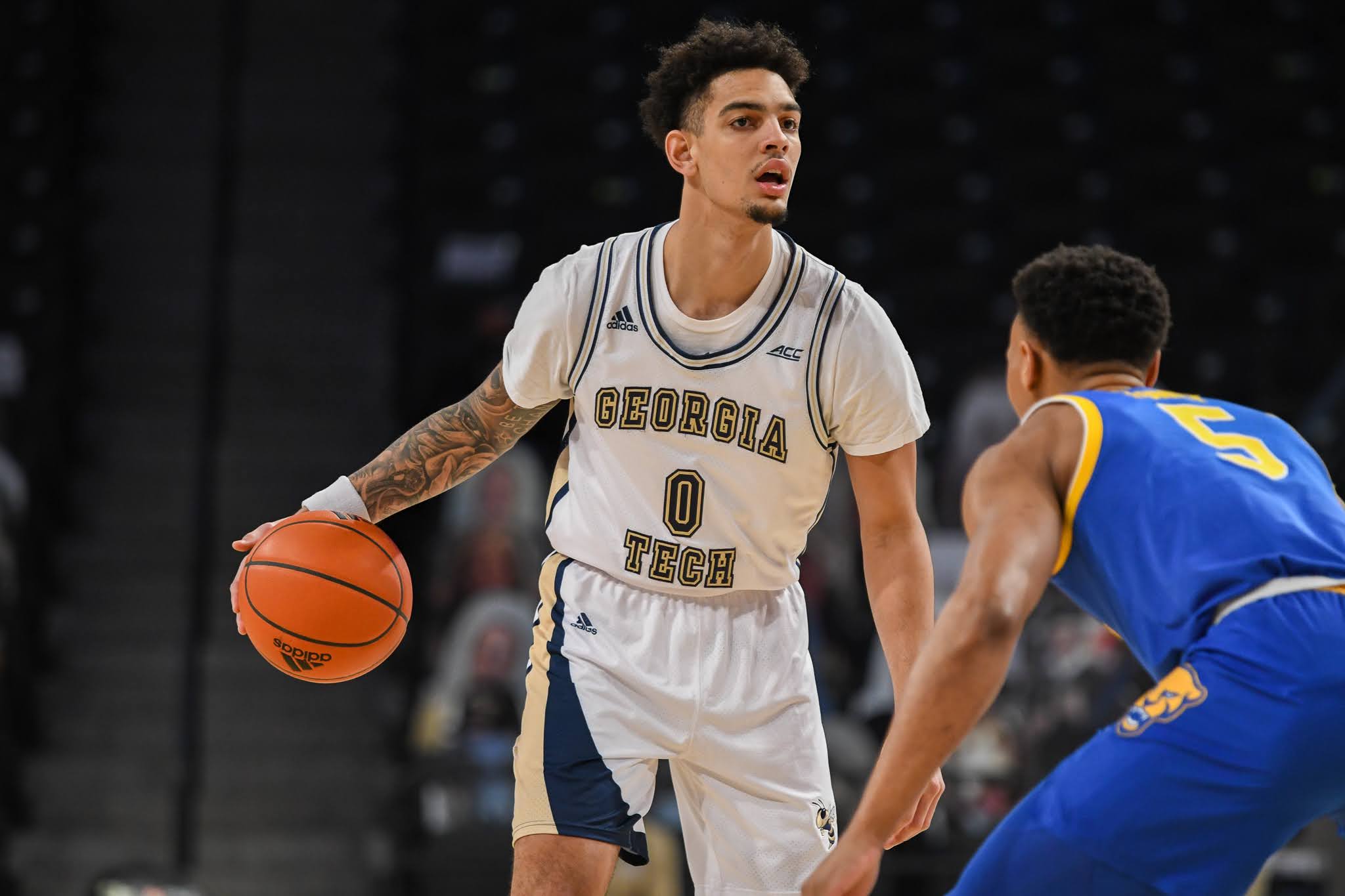 Michael Devoe has connected on his last 16 free throw attempts, including 14-for-14 vs. Clemson and Pitt combined. (photo by Danny Karnik)

A reason for Miami’s struggles.

Both have the same root cause: a troubling lack of Lykes.

After weeks of expressing hopes for the return of 5-7 guard Chris Lykes, head coach Jim Larranaga expressed doubt Friday that his standout point guard will play again this season for the Hurricanes. Lykes, who has not played since Dec. 4 and has missed the last 17 games with a left ankle injury, has been ruled out for Saturday’s game.

A 15.4-point-a-game scorer last year, Lykes gives Miami an electric, ball-on-a-string dribbler who uses explosive feints and stop-on-a-dime quickness to get off his shots.  He’s fearless with the ball, dynamic off screens – the most efficient shooter in the ACC off ball screens last year according to Synergy – and dangerous in late shot-clock situations.  Defending him calls to mind a cat chasing a laser pointer.

Without him, though, the Hurricanes have struggled.  Miami ranks in the 11th percentile nationally in halfcourt offensive efficiency (0.79 PPP) and in the sixth percentile against zone defenses according to Synergy.  Their most efficient offense comes from transition, where they rank in the 82nd percentile (1.1 PPP).  In Lykes’ absence, 6-3 sophomore Isaiah Wong (17.4 ppg) has emerged as one of the rising scorers in the ACC, a long-armed, attacking guard capable of creating off the bounce and scoring at all three levels.

Josh Pastner said Miami reminds him of Syracuse in the way its guards have freedom to operate and can erupt at a moment’s notice.  They won’t shoot threes often or accurately – they rank last in ACC play in three-point percentage and 13th in three-point rate – which has often invited teams to play heavy zone against them.  That could change considerably if Lykes, a 38-percent three-point shooter a year ago, returns.  Key for Tech:  shut off Miami in transition and make them “see bodies” when defending in the halfcourt.

Like Notre Dame, Pastner cautions not to look at Miami’s record.  The Hurricanes, who earlier this year were down to six scholarship players due to injuries, knocked off No. 16 Louisville and almost beat No. 18 Virginia Tech twice.  They’ve also fallen victim to some rotten luck in ACC play.  In three straight games from Dec. 29-Jan. 5, Miami fell 80-78 to Virginia Tech, 66-65 to Clemson, and 67-65 to North Carolina.

According to Elias, they became the first ACC team to lose three straight conference games by a total of five points since…. Georgia Tech in 1989-90.

Yes, even Georgia Tech’s magical run to the 1990 Final Four had a vortex of close losses midway through the year.  Fun fact: that last loss to Duke featured a 36-point outing by Dennis Scott at Cameron Indoor Stadium.  It remains the most points ever scored by a Yellow Jacket in a road ACC game.

The statistic doesn’t exactly strain credulity – if you shoot worse than your opponent, you’re more likely to lose.  Yet until this month, Georgia Tech had never won a game in the Josh Pastner era when shooting a lower field goal percentage than its opponent (0-51).

The Jackets have now won two of their last three.

The Yellow Jackets can withstand that, of course, because of their improved turnover rate on defense.  They may be allowing more accurate shooting, but they’re also forcing more turnovers.  And when you force a turnover, your opponent can’t get up a shot.  That’s allowed Tech to reverse a trend that, until recently, had always resulted in a loss.

The Yellow Jackets will try to catalyze those turnovers into fast break points Saturday – Miami ranks in the 8th percentile nationally in transition defensive efficiency according to Synergy (1.13 PPP).

Michael Devoe may be the only person in history to take free throw shooting advice from Dwight Howard.

As he told us in our postgame radio interview Sunday, Devoe incorporates a pre-shot trick he first heard from Howard, the former All-Star with his hometown Orlando Magic.

“He said that he plays a song in his head when he’s up there shooting free throws.  That’s something that I do.  I put a song in my head and just get into the rhythm,” Devoe said.

Never mind that Howard, now in his 17th NBA season, is a notoriously shaky free throw shooter who has only averaged 56 percent for his career.  Whatever is on loop in Devoe’s head, the advice has served him well lately.  After going 6-for-6 against Pittsburgh, the junior has now made 16 straight free throws dating back to the Notre Dame game.  Don’t expect free throws to be plentiful Saturday:  the Hurricanes rank 2nd in the nation in free throw rate and rarely give up foul trips.

If he maintains his spot atop the ACC rankings, Alvarado will become the first player to lead the ACC in steals in back-to-back seasons since….

The senior could join some even more bygone company at the free throw line.  After a 6-for-6 performance against Pitt, Alvarado now leads the ACC in free throw percentage (.860).  If that holds, he’ll become the first Yellow Jacket to lead the ACC in that category since…

Now that we’re prepared, we hope you are as well.  Join us for pregame coverage starting at 11:30 a.m. ET on the Georgia Tech Sports Network from Learfield IMG College.  See you Saturday.