Inside The Chart: Making of Mason

A day after rushing for 72 yards and a touchdown in Georgia Tech’s season opener against No. 1 Clemson, the Yellow Jackets running back alighted to his hometown of Gallatin, Tenn., to catch the football game at his alma mater, Gallatin High. His brother, James, is a senior linebacker and running back for the Green Wave.

Instead, he watched as another Gallatin running back broke his school record of 307 rushing yards in a game.

Mason, though, was hardly crestfallen.

“I didn’t know [he had broken my record]. They announced it on the intercom. I was too busy getting hype on the sideline,” said Mason, who added that his brother “showed out and did his thing” as well (he led the team with 10 tackles that night).

Besides, Mason didn’t need to wait long to set another record. Last Saturday at Bobby Dodd Stadium, the redshirt sophomore rushed for a career-high 99 yards and a touchdown in Georgia Tech’s 14-10 win over USF. Only a run for minus-2 yards on his final carry, which he did while Tech was trying to burn off the clock, prevented him from his first 100-yard game.

“I already know that’s going to come,” Mason said with a smile.

In all new offenses, it helps to have a rugged, reliable yard-eater. Through two games, Mason has certainly looked the part.

“Jordan is one of the hardest runners I’ve ever been blessed enough to play with,” said offensive tackle Zach Quinney.  “No matter what the circumstance is, no matter what the score is, down and distance – you know for a fact that Jordan is going to run as hard as possible. He’s the type of guy you want to block for.”

“He’s a gamer,” running backs coach Tashard Choice said of Mason’s performance against USF, which topped his previous high of 95 yards against the Bulls last year.

“To be able to make plays in the fourth quarter when it counts, when we need you to break tackles and make big plays, that’s what he was able to do.”

Mason’s emergence is less a breakout than an evolution of what Tech fans saw from him last year. The 6-1, 219-pounder earned a start on opening day and gradually settled into the primary running back role for the Jackets, averaging 50.5 rushing yards per game and seven touchdowns. His 6.1 yards per carry ranked ninth nationally among all freshmen. Perhaps most impressively, only one of Mason’s 108 carries went for negative yards.

Choice “talks to us about the lower half. When he’s recruiting, he looks at the lower half. He doesn’t have to look at the top part of you. All he has to do is look at your hips and below, and he can tell if you’re a running back or not. That’s the main thing I’ve been working on, my bottom part,” Mason said.

“My footwork is better. I’m able to make some defenders miss, and get the yards I need.”

That shiftiness was evident in Death Valley. Facing a Clemson defense that led the nation last year in fewest yards per carry (2.51), Mason forced a whopping 11 missed tackles according to Pro Football Focus. It was the second-highest total in the Football Bowl Subdivision that week. 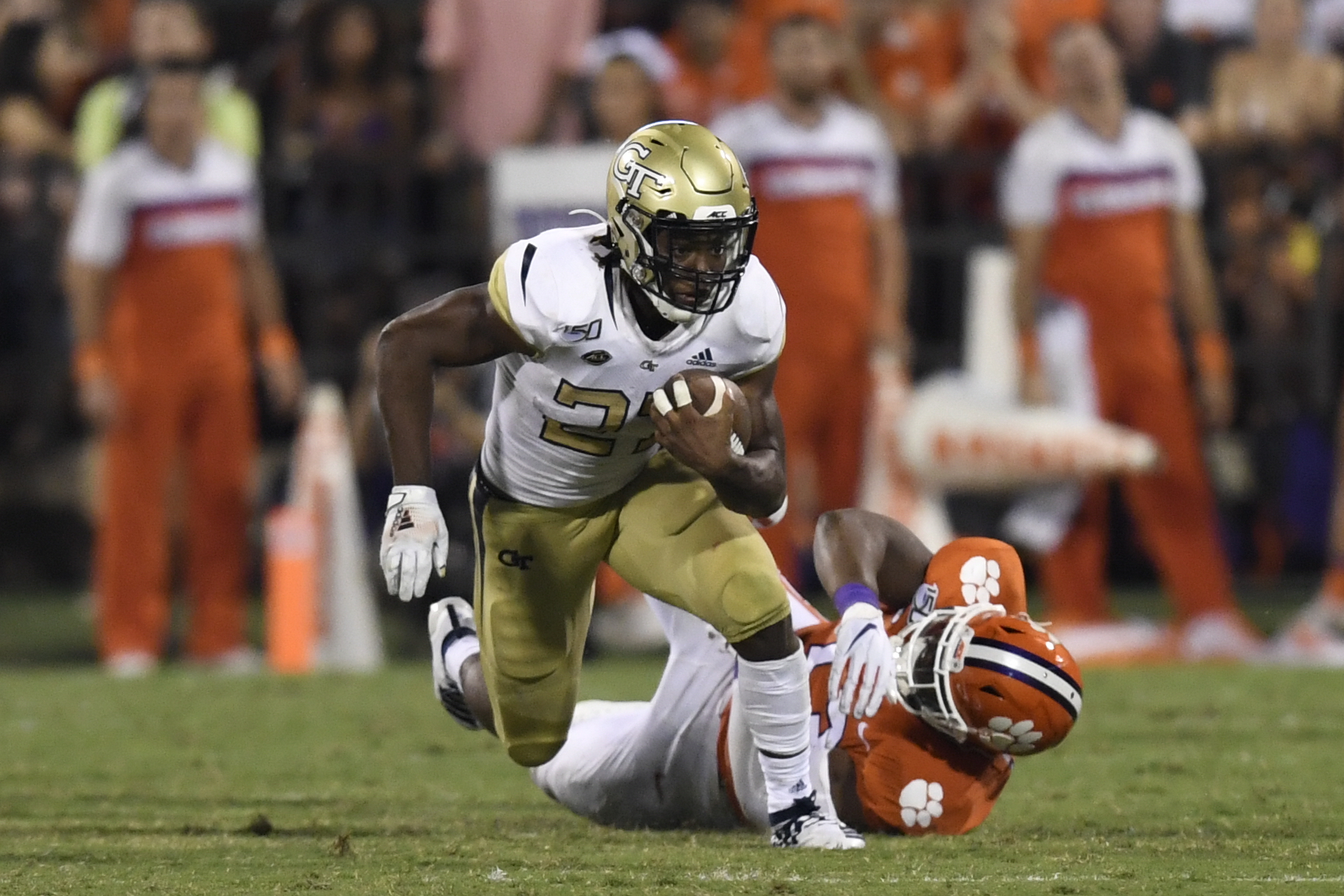 His knack for busting tackles continued against USF. Head coach Geoff Collins, though, was more impressed by a different set of highlights.  Every Sunday, the Yellow Jackets gather for a team film session breaking down their last game. The coaches cue up everything noteworthy – good, bad and ugly.

When they rolled the footage from USF, Collins said, “We didn’t really show a lot of JP’s runs. He had two pass protections that were as big-time as they get throughout the game to help other people. He had one of the key blocks on Tobias [Oliver’s] touchdown run.”

“So other than being a really good running back and having a lot of production, those things – blocking for his buddies, pass protection – those things are special. They’re unselfish,” Collins added.

That message didn’t go unnoticed by Mason. He knows better blocking is the next step in his goal of becoming a complete running back. In some ways, he knows the success of Tech’s new passing game may ride on it.

“Running spread, we need the ball up more. It’s good that I’ve found my game in pass protection. We work at it every day in practice,” he said.

His improvement in that area may be ongoing, but Mason has already earned the trust of his close friend, frequent classmate and occasional study hall partner Quinney.

“As an offensive lineman, if somebody walks up, I have to know, ‘Okay, JP’s got him.’ I know I can trust him 100 percent to get that guy. Watching him on film, it’s almost like he’s our size, running a 4.4 [40-yard dash]. He’ll go blow somebody up walking up on the line,” Quinney explained.

He’s serious. Mason’s apartment complex gives him free cable. He’s lived there for four months and he still hasn’t plugged in the cable line to his TV.

Jordan Mason will gladly make himself appointment viewing for others.