Inside The Chart – Loyola Chicago

The ball is tipped.

And for the first time in 11 years, there they are.

After a stirring run through the ACC Tournament, Georgia Tech (17-8, 11-6 ACC) makes its long-awaited return to the NCAA Tournament Friday when it faces Missouri Valley Conference champion Loyola (24-4, 16-2 MVC) in the first round.  The Yellow Jackets will try to chisel out their own spot in “One Shining Moment,” but first they’ll need to get past one of the tougher 8-versus-9 seed matchups in recent history.  Both Tech and Loyola won their respective conference tournaments.  Neither has lost since Valentine’s Day.  Despite earning the No. 8 seed in the Midwest Region, the Ramblers have a NET ranking of 10 and a KenPom rating of 9.

It never promised to be easy, even before the Yellow Jackets learned their lineup might change Tuesday.  Then again, Tech has spent the last month essentially playing make-or-break games, knowing one slip-up could sink their entire NCAA Tournament hopes.  Time and again, through foul trouble and second-half deficits and close, white-knuckle finishes, they delivered.

Can that veteran poise and unshakable will carry Tech one more time, this time to its first NCAA Tournament win since 2010?

The moment is here.  And as Luther Vandross sang, it’s all on the line.

Enjoy the top notes from my chart before the Ramblers and Ramblin’ Wreck meet up at famed Hinkle Fieldhouse (4 p.m. ET, Georgia Tech Sports Network from Learfield IMG College): 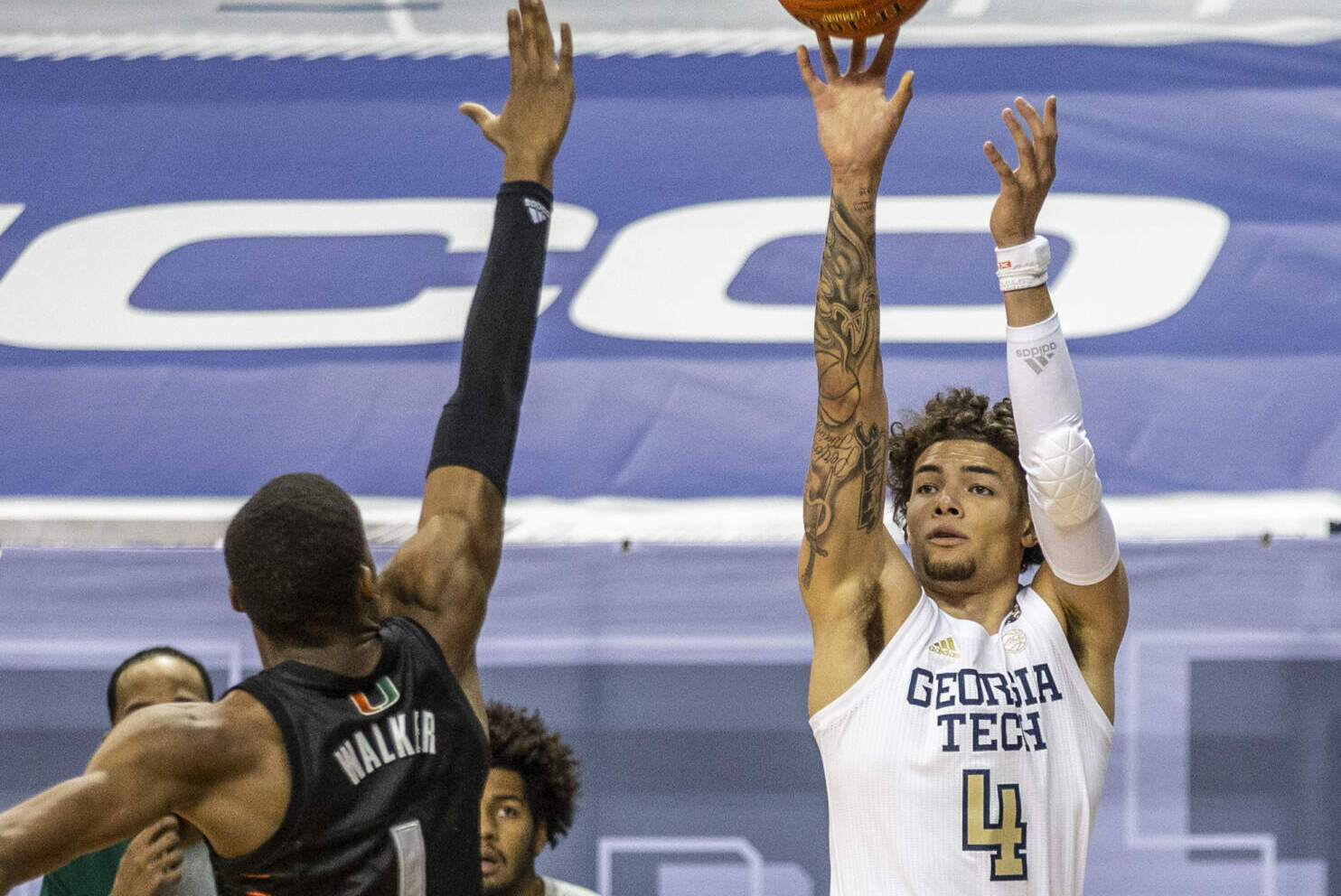 Georgia Tech hit 7-of-14 three-pointers against Miami in the ACC Tournament, but the Yellow Jackets have connected on less than 30 percent over their last five games. (photo courtesy of the Atlantic Coast Conference)

Georgia Tech missed out on a chance to face Virginia in the ACC Tournament semifinals.

In a macro sense, they’ll be facing a mid-major version of Virginia Friday.

Like the Cavaliers, Loyola is anchored by stingy, exhausting, enervating defense.  The Ramblers enter the NCAA Tournament leading the nation in both scoring defense (55.5 ppg) and defensive efficiency, allowing a scant 0.86 points per possession.  Like Virginia they rarely foul or allow second-chance points (see below).  Combined with a deliberate, Cavalier-like tempo, Loyola opponents are under constant, grinding pressure to score when they get quality looks.

The comparisons are more statistical than schematic – Loyola doesn’t play a Pack Line system like the Cavaliers.  When they play man-to-man, watch for them to “ice” ball screens, which forces action toward the baseline.  They also close gaps from the help side and are frisky going for steals.  Lucas Williamson, a 6-4 holdover from Loyola’s 2018 Final Four team, earned Missouri Valley Conference Defensive Player of the Year honors this month, while 6-7 Aher Uguak gives them ranginess and athleticism on the wings.

In a tournament game, simplicity often produces the best results.  Tech will need to cut hard, not let the ball “get stuck,” and attack the second and third side in the halfcourt, something they did well in the second half versus Florida State.  And even though it hasn’t cost them lately, can the Jackets reawaken their three-point shooting?  They’ve made some timely ones, but have only converted 29.7 percent over their last five games (Jose Alvarado in particular may be due: a 43-percent three-point shooter entering March, the senior has made just 2 of 15 during that stretch).  It’s a small sample size, but in Loyola’s four losses the Ramblers have allowed 40.3-percent shooting from three.

Georgia Tech played two teams this year that finished in the top 20 nationally in defensive efficiency (North Carolina 15th, Clemson 20th).  The Yellow Jackets averaged better than a point per possession in each game, and came within a buzzer-beater of sweeping all three.

Even if you include Virginia, the ACC’s lodestar of defensive efficiency (0.92), the Jackets scored 1.05 PPP when they faced them in Charlottesville.  That means in five games against the toughest defenses they’ve faced this year, Georgia Tech surpassed its opponents’ defensive efficiency rating in four of them. 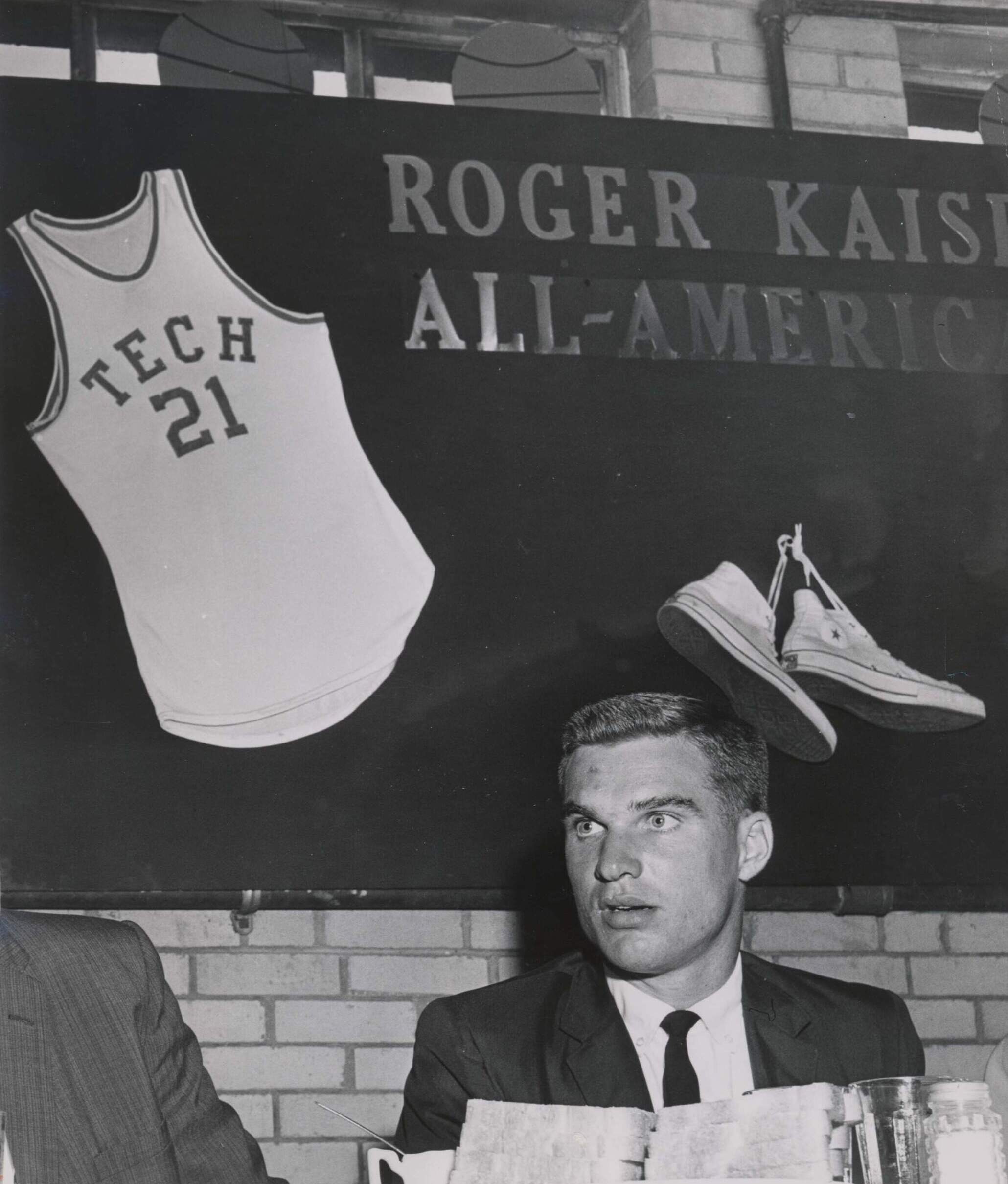 Georgia Tech’s first All-American, Roger Kaiser, grew up in Dale, Ind., just 120 miles from Hinkle Fieldhouse, where he was in attendance for the “Milan Miracle” depicted in the 1988 movie “Hoosiers.”

Georgia Tech isn’t the only team with a multi-faceted, 6-9 senior who won his league’s Player of the Year award.

The Yellow Jackets will duel Friday with Cameron Krutwig (15.0 ppg, 6.7, rpg, 3.0 apg), a third-eam AP All-American who leads Loyola in scoring, rebounds and assists.  He’s also the most seasoned remaining player from the Ramblers’ Final Four squad – as a freshman he had 11 points and 9 rebounds in a first-round win over Miami, then led Loyola with 17 points in the semifinals against Michigan.

Loyola uses the 250-pound Krutwig similar to Moses Wright, stationing him either at the top of the key or in the high post extended area.  He takes 30.5 percent of his team’s shots, making him the highest-usage player Georgia Tech has faced all season.  He has smooth feet, doesn’t get rushed, and uses his body well to create angles for his left-handed shot.  He’s also a gifted passer, with a vaguely Jokic-esque ability to lead teammates off cuts.

With Krutwig as the fulcrum, Loyola ranks third in the nation in field goal percentage (50.5 percent) and fourth in 2-point field goal percentage (58.0 percent).  Pastner says the Ramblers’ set-heavy offense reminds him of Clemson or Virginia Tech, adding “they’re not a ‘dribble-dribble’-type of team.”  They’re good moving off the ball, utilizing back screens and curl cuts to free themselves.

That doesn’t mean Loyola is bashful from deep, though.  Head coach Porter Moser has surrounded Krutwig with capable three-point shooters like Braden Norris (8.1 ppg, 40% 3pt.), Lucas Williamson (8.2 ppg, 36% 3pt.) and senior guard Keith Clemons (46.7% 3pt.).  After a late-season lull, the Ramblers sank 49 percent of their three-point shots in the MVC Tournament (28 of 57).  Pay attention to Clemons, a Norcross, Ga., native who made 7 of 11 threes during the Missouri Valley Conference Tournament.  Among the keys for Tech Friday: navigate screens well and stay alert off the ball.  Also, can their mixing defenses and versatile defending at the “4” and “5” spots keep Loyola from catching a rhythm?  Khalid Moore, whose role figures to grow Friday, is particularly good at guarding taller players.

Loyola’s Marquise Kennedy, a former MVC Sixth Man of the Year, gives the Ramblers an explosive, athletic presence off the bench.  He also has some ACC connections:  the Chicago native charted an offer from Florida State out of high school, and his head coach at Brother Rice High School, Bobby Frasor, was a reserve guard on North Carolina’s 2009 national championship team.  Frasor is also an alum of Brother Rice (as is my Dad, apropos of nothing).  And Uguak began his career at New Mexico, where he was recruited by Yellow Jacket great Craig Neal.

Georgia Tech will play its first-ever game at Hinkle Fieldhouse, the home of Butler University and one of the great cathedrals of college basketball.  The 9,100-seat arena famously served as the site of the “Milan Miracle,” when tiny Milan High upset favored Muncie Central to win the 1954 Indiana single-class state basketball championship.  The David-versus-Goliath nature of the game inspired the 1988 film Hoosiers.

And who was in attendance for the “Milan Miracle” at Hinkle, then known as Butler Fieldhouse?  A promising freshman for the Dale High Golden Aces in southern Indiana, brought there by his head coach:  future Georgia Tech Hall of Famer Roger Kaiser.  He also played in an Indiana high school all-star game at Hinkle his senior year.

Now that we’re prepared, we hope you are as well.  Join us for pregame coverage starting at 3:30 p.m. ET on the Georgia Tech Sports Network from Learfield IMG College.  See you in Indianapolis.  Let’s stay awhile.