Inside The Chart – Louisville

They completed one turnaround Saturday.

After a stirring win over No. 16 Florida State, which helped ease the sting of a pair of close road losses, Georgia Tech (8-5, 4-3 ACC) had to celebrate and hydrate quickly.  Less than 48 hours later, the Yellow Jackets find themselves at the KFC Yum! Center to take on No. 2525 Louisville (10-4, 5-3 ACC) in a game that was rescheduled from January 9.

Those losses to Virginia and Duke gnawed at Tech as it prepared for Florida State.  Even after beating the Seminoles, they’ll likely still use them for motivation as they prepare for their next matchup on the road.  They now look to tame a Louisville team that’s fresher – the Cardinals last played Wednesday – but also facing mounting pressure after losing three of its last four games.

There’s no rest for the weary – or the winning.  Enjoy the top notes from my chart as Tech looks for the finishing touch in Louisville (2 p.m. ET, Georgia Tech Sports Network from Learfield IMG College): 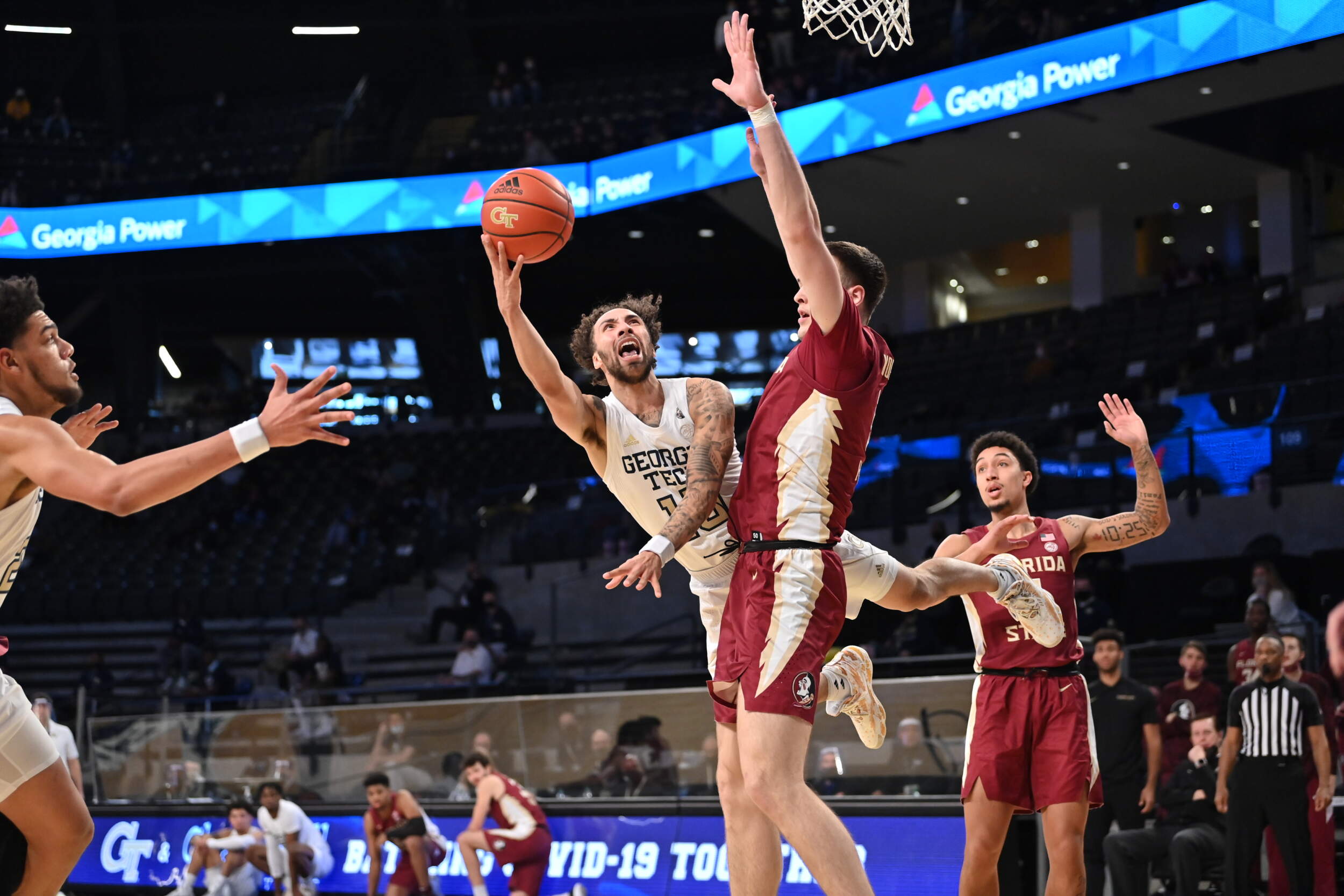 Jose Alvarado and Louisville’s Carlik Jones are the only two players in the ACC to rank in the conference top-5 in scoring and assists. (photo by Danny Karnik)

It may be more worthy of a prime time slot than a 2 p.m. tip, but Monday’s matinee will feature one of the most must-see guard matchups in the ACC this year.

Whatever the outcome, enjoy the battle between Louisville’s Carlik Jones and Tech’s Jose Alvarado.  Jones (17.8 ppg, 5.5 rpg, 4.6 apg), considered by many the top grad transfer in college basketball, averaged 20.0 points per game last season as the Big South Player of the Year at Radford.  He and Alvarado are the only two players in the ACC who rank in the top 5 in both scoring and assists.  Though 6-1 and 180 pounds, he profiles more as a power guard, with a crafty array of pull-up moves and an ability to find the open man if defenses shrink the floor on him.

The Jones-Alvarado matchup should be a treat, a pair of high-IQ, lionhearted guards who play much bigger than their size.  Six-foot-4 David Johnson (12.4 ppg) gives the Cardinals a kinetic complement off the dribble, while also being Louisville’s most reliable three-point shooter (40.4 pct.).  He’s a menace when getting downhill, and scored a team-high 16 points in Louisville’s game at McCamish last year.  Six-foot-8 redshirt freshman Jae’Lyn Withers (10.4 ppg, 7.6 rpg), a high school teammate of Tristan Maxwell, gives the Cardinals a Moses Wright foil underneath.

Without players like Jordan Nwora and Ryan McMahon, Louisville’s three-point shooting has suffered this year: at 31.5 percent, they rank 12th in the ACC.  Tech held Florida State to a season-low percentage from behind the arc Saturday, but the Jackets can’t afford to get complacent.  Pastner praised the way his team used its “stick hand” when closing out on the Seminoles’ three-point shooters.  That attention to detail will be needed again against the Cardinals.

He didn’t take his spot in the starting lineup, but Kyle Sturdivant performed admirably in the absence of guard Bubba Parham Saturday.  The sophomore finished with an impressive +14 plus-minus in 15 minutes of floor time against Florida State, the highest for any Georgia Tech non-starter in an ACC game this year.  It has its blind spots as a statistic, but Sturdivant has logged plus-minuses of +9, +6, +6, and +14 in his last four games off the bench. 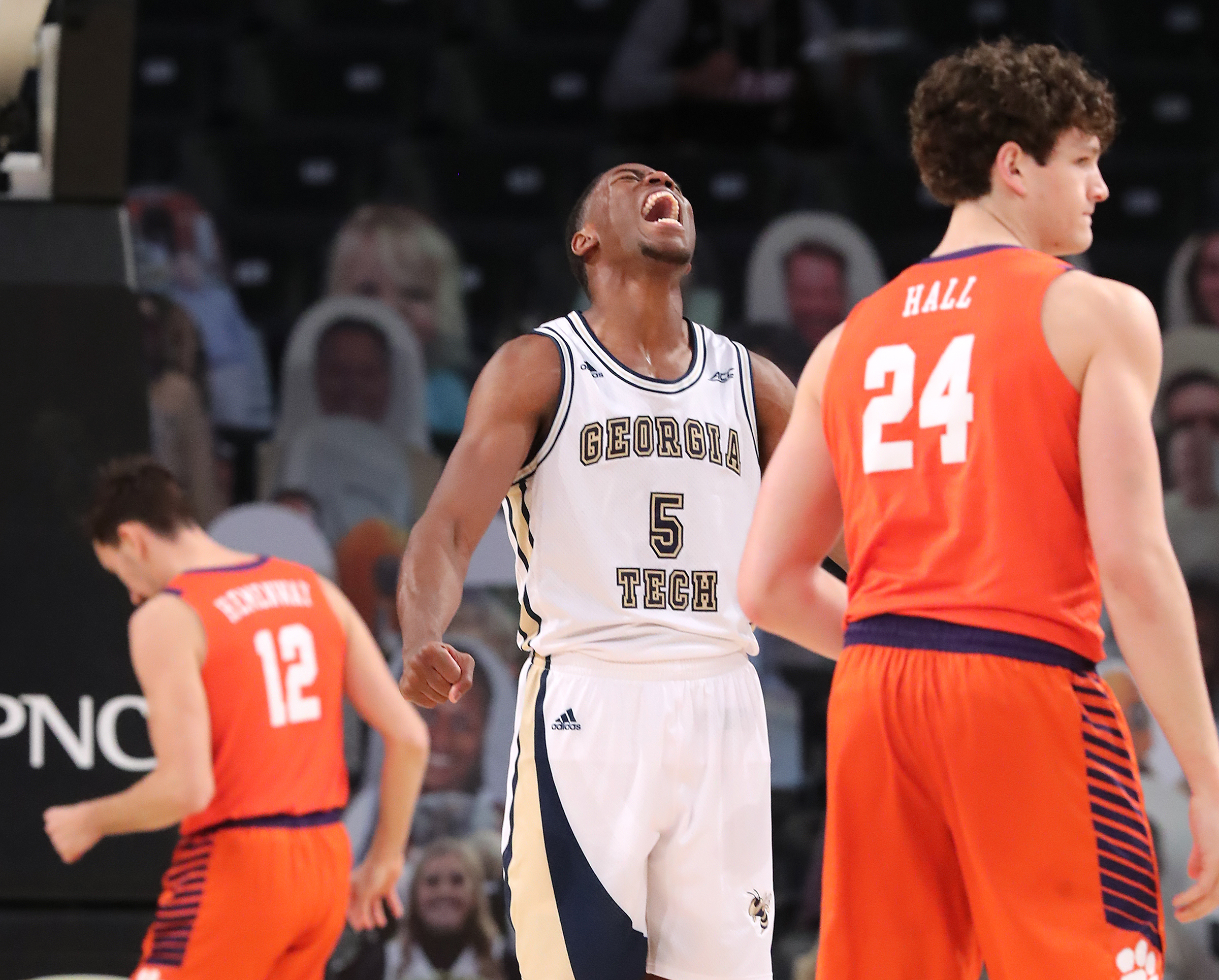 Alvarado is not the only theft artist on the Yellow Jackets’ roster. Moses Wright ranks No. 2 in steals in ACC games. (photo by Danny Karnik)

Alvarado still leads the ACC in steals in conference games (3.57 per game), but the “Brooklyn Burglar” has picked up an accomplice.  Moses Wright, who swiped a career-high six steals against Florida State, has now jumped into second place in that category (2.57 per game).

With Alvarado’s ability to irritate ballhandlers, and Wright’s wingspan able to suction up passes in Tech’s zone, the Yellow Jackets have climbed to 36th nationally in turnover percentage defense.  Even during Tech’s two best defensive seasons under Josh Pastner, 2016-17 and 2019-20, Tech never finished higher than 143rd nationally.

Now combine that with Georgia Tech’s vastly improved ball security – the Jackets have risen to 40th in turnover percentage offense after bottoming out at 345th last year.  That makes Tech one of just two Power-5 teams to rank in the top 50 nationally in both TO-percentage offense and TO-percentage defense.  Texas Tech is the other.

Wright, by the way, has a faint connection to Louisville head coach Chris Mack.  As a famous “zero-star recruit” out of Raleigh, N.C., Wright played AAU ball for a program founded by longtime NBA veteran David West.  West starred at Xavier while Mack served as the Musketeers’ Director of Operations.

Proof that a height differential doesn’t always mean a height mismatch:  Florida State has the tallest team in the nation according to KenPom.  Predictably, the Seminoles lead the ACC in two-point field goal percentage defense (44.9 pct.).

Florida State’s two worst games of the season in two-point percentage defense?  Both against Georgia Tech.

Even after committing to a smaller lineup, Georgia Tech has found success attacking – and scoring – through FSU’s solar-eclipse length.

Now comes the bad news:  Louisville forces teams into taking a disproportionately high volume of threes.  In ACC games, 46.8 percent of their opponents’ field goal attempts have come from behind the arc.  The Cardinals don’t deny as oppressively as Florida State, preferring instead to pack the lane.  Georgia Tech’s three-point numbers have tapered off over the last two games (15 of 48, 31.2 percent), but they can’t be deterred from letting them fly Monday.

Louisville recently welcomed back guard Charles Minlend, a grad transfer from San Francisco who had missed most of the season while recovering from knee surgery.  He’ll try to add to the family scrapbook against Tech:  his Dad Charles had 21 points and 10 rebounds for St. John’s in a 67-55 win over the Jackets at Madison Square Garden on December 28, 1996.

Now that we’re prepared, we hope you are as well.  Join us for pregame starting at 1:30 p.m. ET on the Georgia Tech Sports Network from Learfield IMG College.  See you in Louisville.