Inside the Chart - Georgia Tech vs. Virginia Tech

They lost their top five scorers from a season ago and have a brand new head coach.  But Josh Pastner doesn’t see much of a difference between last year’s Virginia Tech team and the one he’ll face Tuesday.

Pastner’s focus, then, is on daylight savings as the Yellow Jackets (10-12, 4-7 ACC) look to quiet another unrepentant three-point shooting team.  Enjoy the top five notes from my chart as Tech tries to return to the win column at McCamish Pavilion (7 p.m. ET, Georgia Tech Sports Network from Learfield IMG College):

Georgia Tech faces a quicker turnaround than usual Tuesday, but perhaps some familiarity can help.  As you can see, Virginia Tech bears more than a passing resemblance to Notre Dame in the way they share the ball, shoot the three, and refrain from turnovers:

The Hokies don’t have a one-man rebounding magnet like Notre Dame’s John Mooney, but under new head coach Mike Young, their offense shares a few similarities with the Irish.  Their players run to the three-point line in transition.  They thrive on making “plus-one” passes.  They make defenses look like they’re playing on wet linoleum with the way they pump-fake, drive and pitch, all while using their dribbles economically.  Virginia Tech also has a more natural point guard in junior Wabissa Bede, who ranks third in the ACC in assists (6.2).

The Hokies have only made 30 percent of their three-point attempts during their recent losing streak, which reached three games after a 73-64 loss to Florida State.  A few early could jumpstart their confidence.  Can the Yellow Jackets avoid over-helping and close high and hard on Virginia Tech’s shooters?  And can their switching defenses frazzle a young Hokies team (they play six freshmen in their rotation)?

Jose Alvarado set the school record with nine steals against North Carolina State. His defense the game before may deserve equal billing.

Keep that in mind as you watch Virginia Tech’s Landers Nolley II (17.5 ppg), a 6-7, 225-pound small forward who leads all ACC players in field goal attempts.  An Atlanta native, Nolley has an advanced feel and can score at all three levels.  If the Yellow Jackets put Alvarado on him, his ability to get underneath him – much like he did against Nwora – could be key.

Also pay attention to Tyrece Radford (9.5 ppg), a high-motor guard who has scored 42 points in his last two games.  Radford shoots 66.7 percent from the field and averages 6.5 rebounds per game, both astounding numbers for someone who stands 6-foot-1  Pastner compares his unorthodox shot-making to former Yellow Jacket Tadric Jackson.

Speaking of Tadric: his first cousin, P.J. Horne, is a junior forward for the Hokies.

Actually, it happened last year in the series. Notre Dame pulled down 20 offensive rebounds but fell 63-61 to Tech at McCamish. 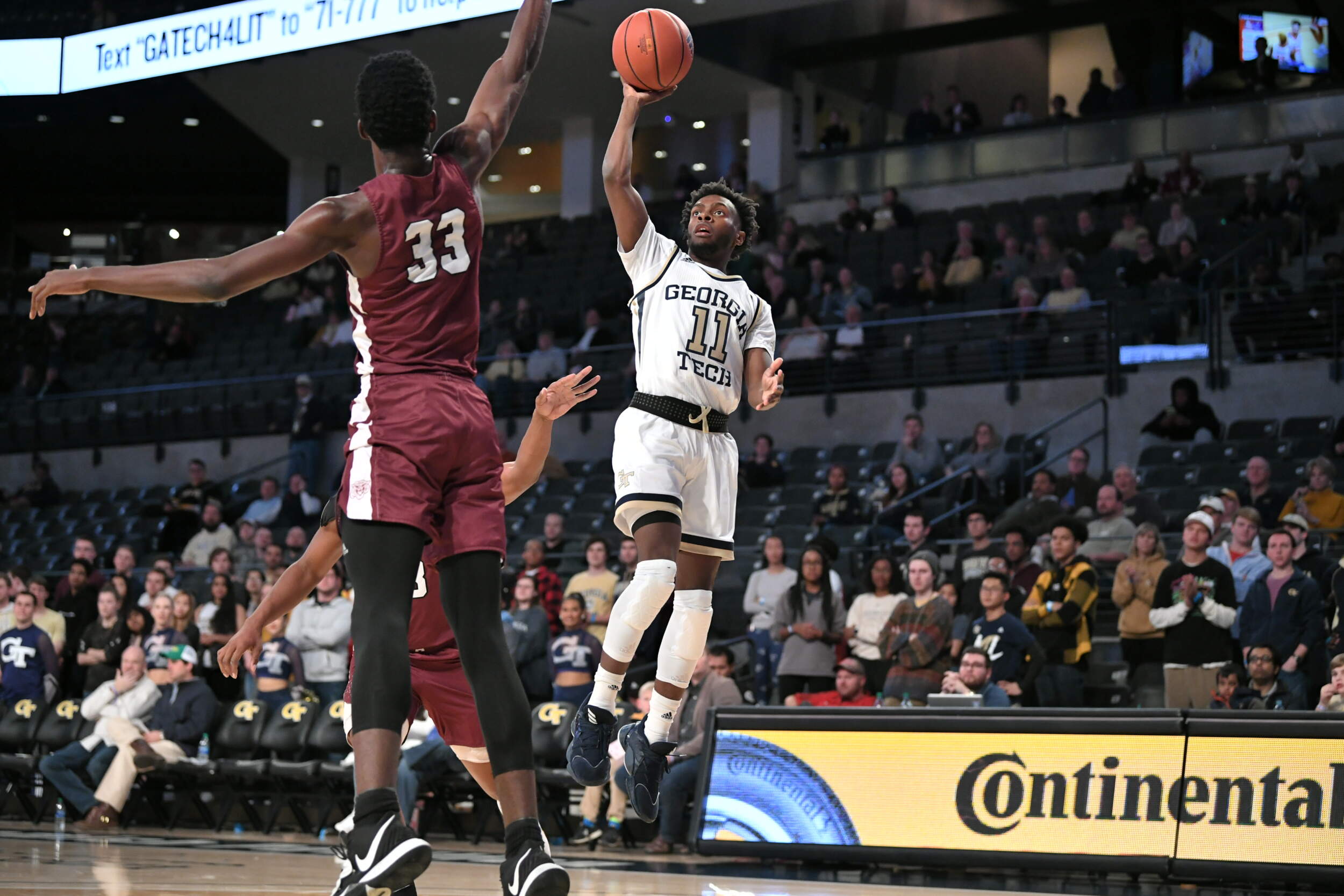 The Super Bowl just ended, but Josh Pastner still has football on his mind.

Tech’s head coach has talked often about the “red zone,” his term for the area inside 10 feet of the basket.  The Yellow Jackets have taken up residency there, ranking fourth in the country in the percentage of their points that come from two-point field goals (61.0 pct).  Virginia Tech is almost the complete opposite:

% of points from 2-pointers

% of points from 3-pointers

Pastner wants his team to become more physical finishers around the rim; despite scoring 42 points in the paint against Notre Dame, he felt they could have scored 20 more with their number of missed shots.  He also wants them to earn more free throw trips: despite attacking the red zone often, Tech ranks just 10th in the ACC in free throw rate (FTA/FGA).

The Hokies play sound, straightforward man-to-man, and often double-team in the post using the weak-side underneath defender.  They also have the smallest high-major team in the country according to Ken Pomeroy’s average height chart.  Can the Yellow Jackets use that height advantage to be efficient in the red zone, both in their shot attempts and free throw trips, to overcome the extra points Virginia Tech figures to get from three?

Mike Young is in his first year at Virginia Tech after a 17-year run at Wofford, where he led to the Terriers to the second round of the 2019 NCAA Tournament.  That means Bubba Parham faced both Young and Virginia Tech while at VMI last season.  The junior scored 12 points in a non-conference game against the Hokies in December, then faced Wofford twice during the Southern Conference regular season.  The Terriers ended Parham’s season – and his VMI career, it turns out – in the Southern Conference Tournament quarterfinals.

Also, eat your heart out James Banks:  the 5-11 Parham has a block in back-to-back games after going without one in his first 20.

Now that we’re prepared, we hope you are as well.  Join us for pregame coverage starting at 6:30 p.m. ET on the Georgia Tech Sports Network from Learfield IMG College as well as our TuneIn and GT Gameday apps.  See you at McCamish.