Inside the Chart - Georgia Tech vs. Syracuse

It’s fitting that Georgia Tech travels to Syracuse, N.Y., aka the “Salt City,” this weekend, because its last game with Syracuse may require a few grains of salt.

The Yellow Jackets (13-13, 7-8 ACC) played the Orange 11 weeks ago, an eternity in the college basketball calendar.  They didn’t have leading scorer Jose Alvarado, who was out with an ankle injury, or starting forward Jordan Usher, who hadn’t become eligible yet.  They had just finished final exams, which threw off their practice routine and caused them to play lethargically.  They still ran center James Banks through the high post, a system they’ve since scrapped.

Still, it can’t be denied that Syracuse clobbered Tech 97-63 at McCamish Pavilion December 7. Elijah Hughes and Buddy Boeheim erupted for six threes apiece and each finished with career highs in points.  The Orange played fiercely after slogging through their worst start in 50 years.  The Syracuse media corps declared it the best game SU has played all year.

A result like that can’t be ignored, no matter the sodium content.  And like their earlier matchup, Syracuse (14-12, 7-8 ACC) comes in to Saturday’s game in a state of desperation: the Orange have dropped five of their last six, including a 90-66 shellacking to Louisville Wednesday, to put their NCAA Tournament hopes in jeopardy.

It should make for another hotly contested matchup at the Carrier Dome Saturday.  Enjoy the top five notes from my chart as Georgia Tech aims for its most ACC road wins in a season since 1996 (4 p.m. ET, Georgia Tech Sports Network from Learfield IMG College):

Josh Pastner compared Hughes (6-11 3pt.) and Boeheim (6-13 3pt.) to James Harden and Russell Westbrook for their explosive scoring performances against Tech in December.  The duo still works under a constant green light, able to pull the trigger off pindowns or pull up for transition threes.

Hughes, the ACC’s leading scorer (18.5 ppg), will likely come out determined after Louisville held him to a season-low 10 points on Wednesday.  But the bigger key for Syracuse may be re-energizing its low-post scoring, which has fallen off during its recent slide.  Marek Dolezaj (11 points, 9 rebounds vs. Georgia Tech), a Pastner favorite for his hustle and high-motor plays, only had 3 points on 0-of-1 shooting against Louisville.  Six-foot-11 Bourama Sidibe (5 points, 8 rebounds, 5 steals vs. Georgia Tech), fouled out in 11 minutes.  Freshman Quincy Guerrier, who generates much of his offense off pogo-sticking around the rim, had a double-double of 14 points and 12 rebounds.  Can Usher, James Banks and Moses Wright avoid a recurrence of foul trouble against the Orange?

Moses Wright had a diverse athletic background growing up, participating in swimming and tennis before switching to basketball at age 12.  Unbeknownst to him, he played Wednesday in front of the most famous ACC power forward who transitioned from swimming to basketball.  Wake Forest legend and two-time NBA MVP Tim Duncan was a competitive swimmer in St. Croix, U.S. Virgin Islands, before Hurricane Hugo destroyed the lone Olympic-sized pool on the island.  He switched to basketball soon thereafter.  Duncan had a courtside seat for Wright’s 14-point, 7-rebound performance against his alma mater.

Conventional wisdom says you need to be efficient from three to beat Syracuse’s 2-3 zone.  Yet look at the Orange’s record against the best teams in the league from two-point range.

Syracuse’s lone win against a team that ranks in the top half of the league in two-point field goal shooting percentage?  You guessed it – Georgia Tech.

That might still be a welcome sign for the Jackets, who rank seventh nationally in the percentage of their points that come off two-pointers (59.5%).  Michael Devoe (24 points) and Jose Alvarado (22 points) did a terrific job breaking down defenders from the slots against Wake Forest.  They’ll try to be equally clinical against Syracuse’s 2-3 zone, which can still tie offenses in knots despite ranking 139th nationally in defensive efficiency, a program low in the KenPom era (2002-present).  Tech will have to do a good job swinging the ball to the second and third side, making plus-one passes, and rotating the ball through high post to create overload situations.

How efficiently can the Yellow Jackets create opportunities for themselves in the paint?  Pay attention to that area Saturday – it could make a huge difference.  And of course, Tech’s guards will have to avoid the tripwire of turnovers that Syracuse’s zone can create.  Devoe’s 24 points against Wake Forest may give him a boost against Syracuse; the sophomore is 3 of 18 from the field in two career games against the Orange. 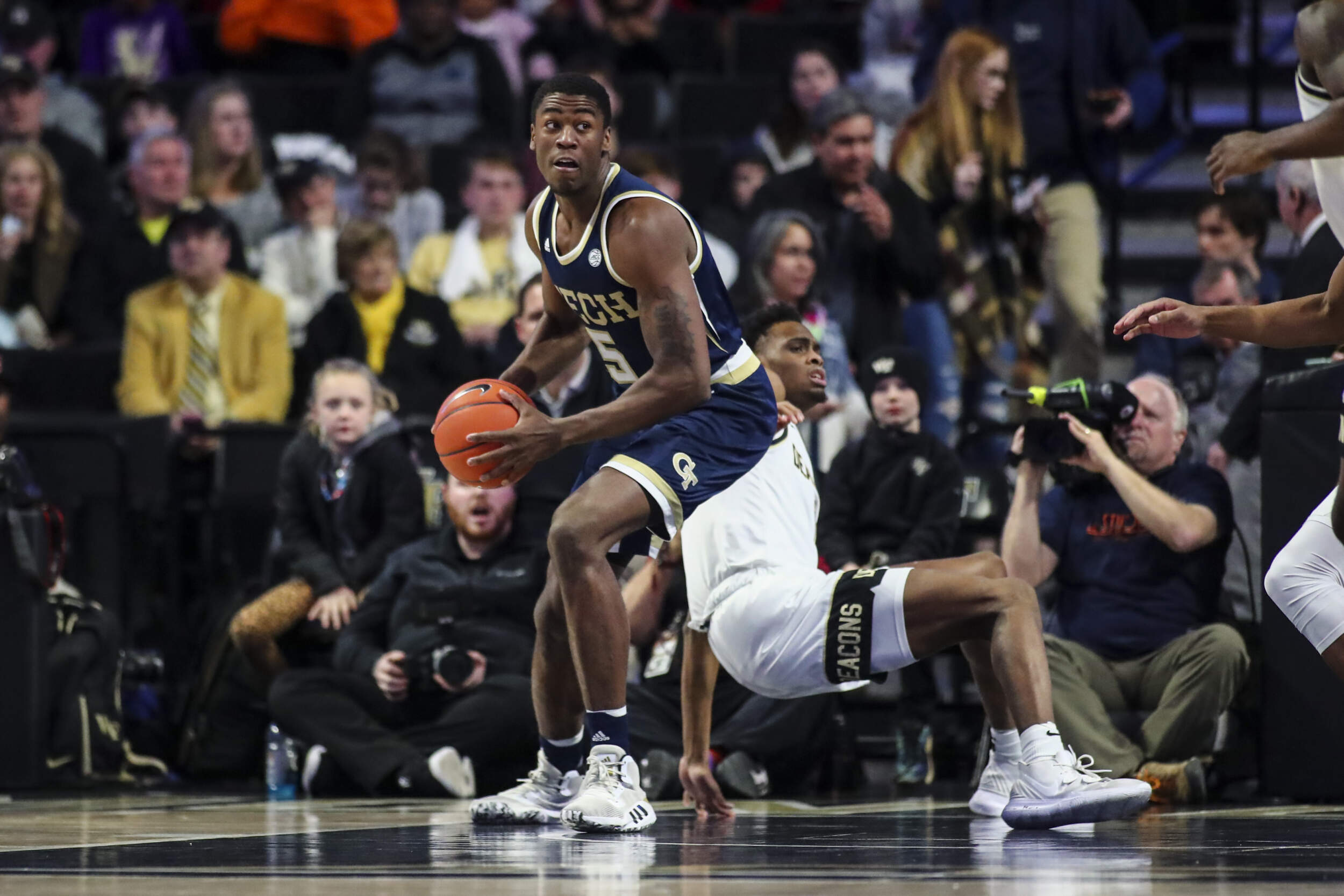 And who had the record for nearly 15 years before Stephenson and Telfair?  A prolific guard from Queens who listed Syracuse as one of his final schools before ultimately signing with Tech:  Kenny Anderson.

David Didenko, Georgia Tech’s junior-college sophomore, originally hails from Yakutsk, Russia, approximately 280 miles from the Arctic Circle.  With an average of -32 degrees, Yakutsk holds the distinction of having the coldest average winter temperatures of any major city in the world.  That may make Didenko the lone player in the ACC who would consider a trip to Syracuse, N.Y., in late February balmy.

Now that we’re prepared, we hope you are as well.  Join us for pregame coverage starting at 3:30 p.m. ET on the Georgia Tech Sports Network as well as our TuneIn and GT Gameday apps.  See you at Syracuse.