Inside the Chart - Georgia Tech vs. Pittsburgh

They bounded out of the film room and onto the Zelnak Practice Center floor Monday, resolutely energetic in spite of the news delivered to them minutes earlier.

The lack of a postseason hasn’t robbed Georgia Tech (15-14, 9-9 ACC) of its motivation heading into its final two games.  Far from it.  The Yellow Jackets know they have a chance for their first winning conference record since 2004.  They can secure their longest home ACC win streak since that famed 1995-96 ACC regular-season championship team.  They can avenge a loss to Pittsburgh (15-15, 6-13 ACC), a team that beat them Feb. 8 but has since dropped six in a row.  And most importantly, they can send off their two seniors, James Banks and Shembari Phillips – the ones who lose the most from Tech’s postseason ban – with one last win at McCamish Pavilion.

Head coach Josh Pastner expected his team to be crestfallen.  Who wouldn’t?  But he also wasn’t surprised by his players’ resilience.

That competitive excellence will try to push them closer to some milestones that haven’t been reached at Tech in a long time – postseason or not.  Enjoy the top notes from my chart as Georgia Tech runs out of the home locker room one final time in 2020 (9 p.m. ET, Georgia Tech Sports Network from Learfield IMG College): 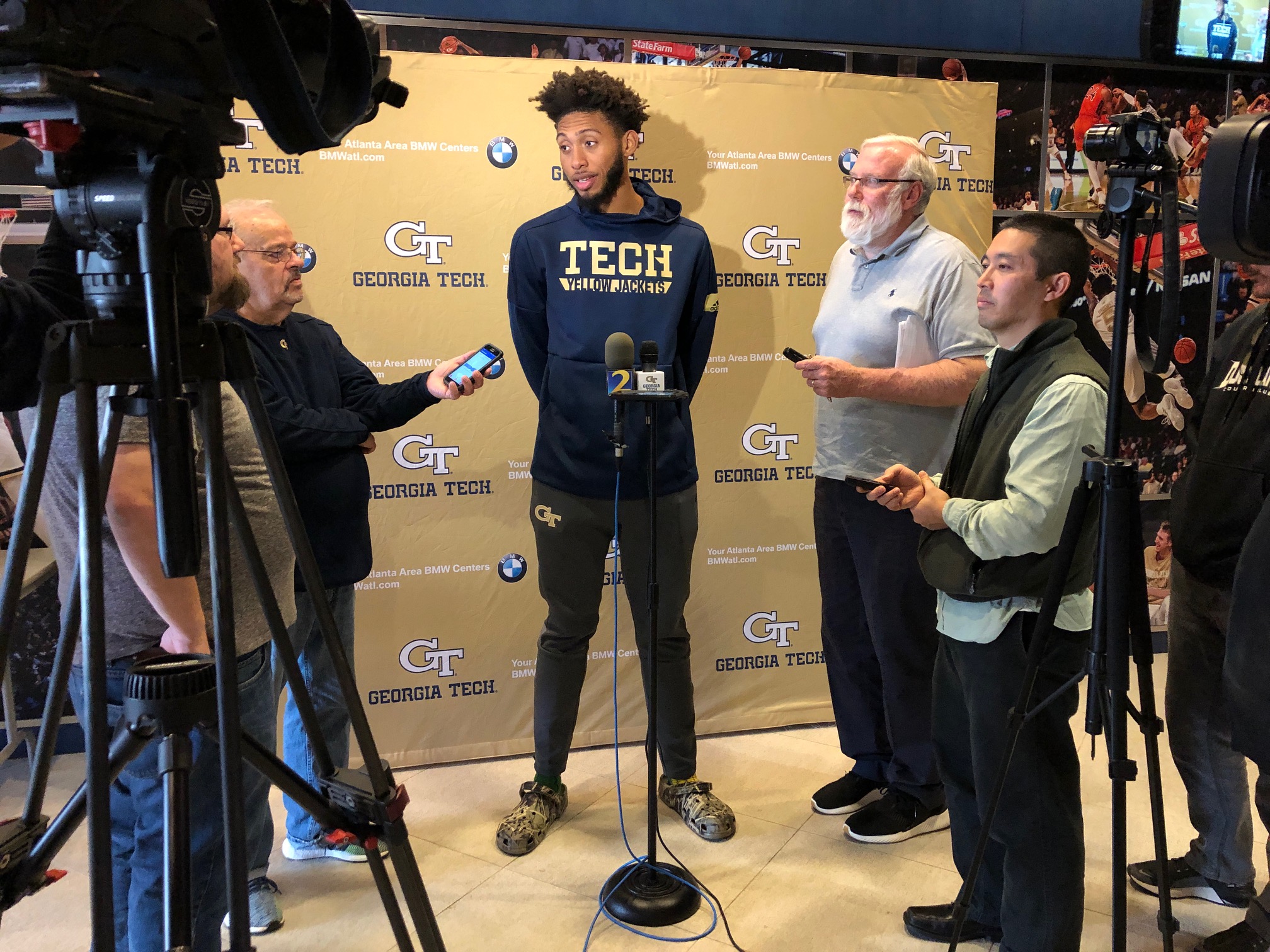 Georgia Tech’s three-point defense claimed another victim Saturday, holding Miami to a season-worst 2-of-17 shooting in a 63-57 win.  Remarkably, in the Yellow Jackets’ last three home games, their opponents (Louisville, Clemson, Miami) have all shot a season-worst in three-point percentage.

Pastner attributes it to his team’s improved man-to-man defense, specifically the way his guards have “warred” over screens.  In Pastner’s vernacular, a player “wars” over a screen by sweeping his lead leg over the screener, which allows him to stay in front of his ballhandler.  Tech’s guards have become more proficient at that technique, leading to fewer breakdowns and open threes off kickouts.

Three-pointers aren’t as imminent a threat against Pittsburgh – the Panthers shoot 29.8 percent, second-worst in the ACC – but their ability to create off ball screens was a key element in their 73-64 win last month.  In the second half especially, the Panthers queued up a barrage of side ball screens for players like Xavier Johnson (11.7 ppg, 5.0 apg), Audiese Toney (24 points vs. NC State Saturday) and Trey McGowens (14 points, 9 assists vs. Georgia Tech).  Too often they got downhill and either scored or drew fouls.  Can Georgia Tech tighten up that aspect of its defense Wednesday?  In spite of being undersized, Pittsburgh is also an active, athletic offensive rebounding team (#44 NCAA OR%).  Pastner lauded his guards’ defensive rebounding against Miami – Jose Alvarado, Michael Devoe and Bubba Parham combined for 10.  They’ll need to bring that same ethos to the boards Wednesday.

Since joining the ACC in 1979-80, a Georgia Tech player has recorded seven or more steals in a game five times.

Jose Alvarado has done it twice this season.

Alvarado and Mark Price are now the only two players in Georgia Tech history with two career games of 7 or more steals.

Most career games with 7+ steals

Tech’s defense has made it hard for its opponents to make hay from the three-point line of late. (photo by Danny Karnik)

To know James Banks’ personality, just look at his feet.

While most of his teammates follow their sneakerhead urges, Banks often strolls in to Zelnak wearing size-17 Crocs and patterned, mismatched socks.  His choice of footwear Monday:  black Crocs with socks that had tacos and aliens on them.

We’ll see what he has cooked up for his final entrance Wednesday.  Banks and Moses Wright will try to limit the effectiveness of Pitt’s Justin Champagnie, who may earn the ACC’s NDROY (“Non-Duke Rookie of the Year”) award.  A 6-6 tweener forward, Champagnie torched Tech for a career-high 30 points and nine rebounds last month.  He has a fluid inside-out game and crashes the boards hard.

Georgia Tech also broke from its routine at Pittsburgh, opting not to do a shootaround the morning of the game.  Pastner says he mainly did it to give Alvarado some much-needed rest after his daughter was born three days earlier.

The decision didn’t produce cold shooting so much as careless passing: the Yellow Jackets committed an ACC-high 22 turnovers against the Panthers.  After falling behind 12-4, Pitt switched to a 2-3 zone, which forced even more sloppiness out of Tech.  The Panthers are more active playing in gaps than a typical zone defensive team.

Of course, when you can’t get a shot up, you don’t have a chance to offensive rebound either.  Pittsburgh ranks 345th in the nation in defensive rebounding percentage, the worst of any major-conference team in America, but that area felt under-exploited last month.

The Yellow Jackets are coming off their best offensive rebounding game of the season against Miami (18 OR on 36 missed FGA).  If they can limit their turnovers, pay attention to the offensive glass as well.

This year marks the 20th anniversary of Josh Pastner’s Senior Day at the University of Arizona.  So what does he remember most about that night at the McKale Center?

“The refs gave me a foul.  I got a few free throws,” he recalled.  Pastner says he had four points in a season-ending win over Cal.

Now that we’re prepared, we hope you are as well.  Join us for pregame coverage starting at 8:30 p.m. ET on the Georgia Tech Sports Network from Learfield IMG College, as well as our TuneIn and GT Gameday apps.  One last time, see you at McCamish.