Inside the Chart - Georgia Tech vs. Notre Dame

Amid the jubilation of the post-game locker room in Chestnut Hill, Moses Wright approached Josh Pastner with an urgent bulletin.  Georgia Tech had just polished off a convincing 71-52 win over Boston College, with Wright recording his second straight double-double with 18 points and 10 rebounds.  But the forward’s mind had already moved elsewhere.

You can’t fault him for the forward thinking.  Georgia Tech already has three road wins in the ACC, its most since 2015-16.  But Wright and his teammates have yet to deliver a conference win to Tech fans in person.  Granted, they’ve only had two opportunities (Syracuse and Duke), but by no means are they unique:  entering the week ACC teams have gone a puzzling 16-22 at home in conference play.  But protecting the home court was at the forefront of Wright’s mind, even in the adrenalized atmosphere of a winning locker room.

That won’t come easy against Notre Dame (10-6, 1-4 ACC), a team that’s fated to play close games with Georgia Tech until the end of time.  In 13 matchups as members of the ACC, the average margin of victory is a scant 5.2 points.  Notre Dame’s last four ACC games have been decided by a total of 10 points, including a 67-64 loss to Louisville last weekend.

That means a raucous McCamish Pavilion crowd could take on added importance Wednesday.  As you get ready for tip-off, enjoy the top notes from my chart as Georgia Tech (8-8, 3-3 ACC) tries to pull above .500 in conference play (8:30 p.m. ET, Georgia Tech Sports Network from Learfield IMG College): 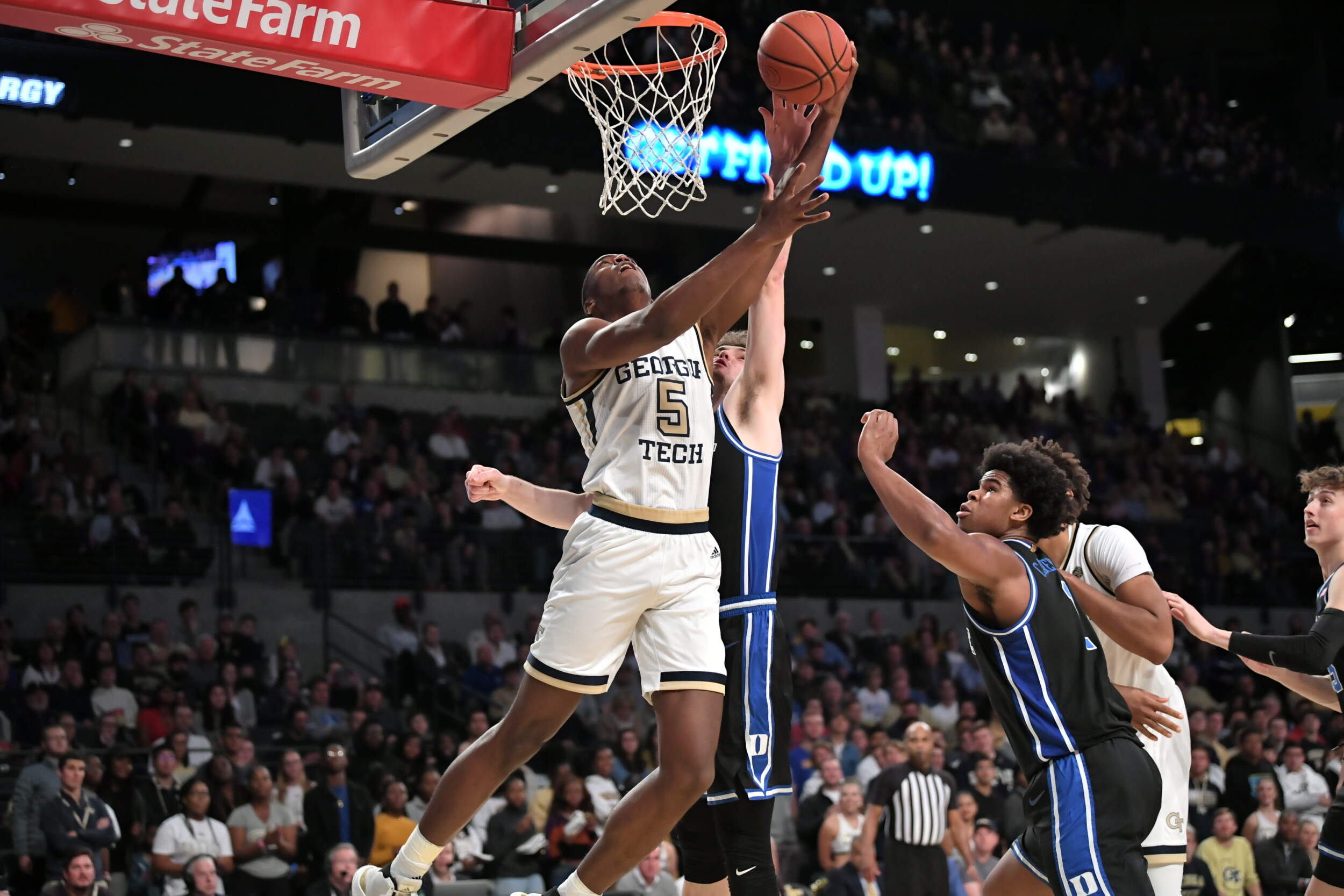 Usually a team’s keys to win – what to limit, what to take away – line up with an opponent’s strengths.  That’s not necessarily the case with the Irish.  In three games against Georgia Tech last year, Notre Dame grabbed a whopping 54 offensive rebounds.  The Irish ranked 12th in the ACC in offensive rebounding percentage in conference play.

Why the anomaly?  The Irish run a lot of four- and five-out motion, with almost every player cutting, curling and slipping around the perimeter in search of drives, kickouts and spot-up jumpers.  That can stretch a defense as variable as Tech’s.  Notre Dame’s ball movement and high three-point volume – only Virginia Tech shoots a higher rate of threes in the ACC – also causes lots of hard closeouts, which makes Tech vulnerable to offensive rebounds.  The Jackets’ ability to both guard rebound and gang rebound will be ultra-important Wednesday.

Another reason Notre Dame hoarded offensive rebounds against Tech?  They had John Mooney.  The Irish’s 6-9, 245-pound senior leads the nation in rebounds (13.9) and has ripped off 10 straight double-doubles.  For perspective, James Banks and Moses Wright have 10 double-doubles combined.

Offensively, Mooney can catch from the long post, low block or high post.  He has a soft touch from the baseline, but is also clever at ducking in and creating angles.  He’s also a credible catch-and-shoot threat from three-point range (33.3 pct.), enough where opponents have to respect him.  Oh, and those rebounds – you may not find a more ferocious, instinctive second jumper in the ACC.  Moses Wright’s bounciness and ability to rebound out of his area could be a much-needed antidote to the Irish’s preseason first-team All-ACC forward. 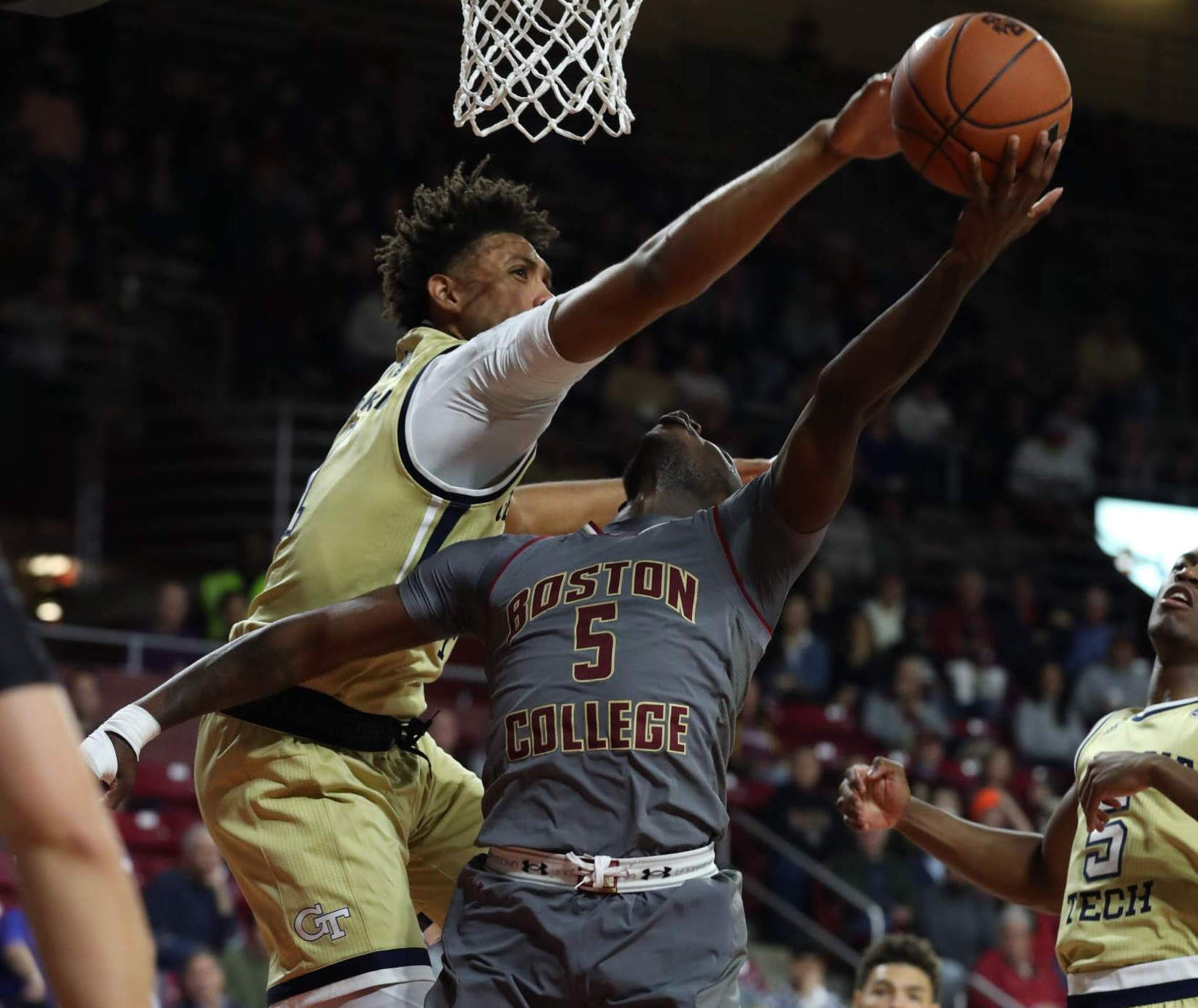 As a senior at La Lumiere School in LaPorte, Ind., James Banks said he occasionally drove the 40 minutes to Notre Dame’s campus to play pick-up games against the Fighting Irish’s players.  Whether that familiarity made him comfortable, Banks averaged 12.3 points, 11.0 rebounds and 62-percent field goal shooting in three games against the Irish last year.  He wasn’t the only Jacket with a gaudy stat line against the Irish: Moses Wright scored a career-high 25 points against Notre Dame in the ACC Tournament.

The Irish downshifted to a smaller lineup against Louisville in hopes of stretching out the Cardinals’ bigs on offense (it worked – Notre Dame rallied from a 16-point deficit to lead by four with five minutes left).  If they go small against the Yellow Jackets, could they also play more zone to prevent Banks and Wright from getting paint touches and pindowns?  Notre Dame plays roughly 75-percent man-to-man according to their Synergy numbers.  Pay attention to that subplot Wednesday night.

John Mooney won Orlando Sentinel Player of the Year honors his senior year in Orlando, Fla.  Michael Devoe, then a sophomore, earned a spot on the first team.

Devoe has struggled to finish around the rim lately, shooting 3 for 11 in consecutive games.  However, Notre Dame commits the fewest fouls per game in the nation, suggesting that if the Jackets “conquer the ACC” – Pastner’s term for getting the ball to the ACC logo roughly 10 feet from the rim – they can finish without much obstruction.

Defensively, Devoe and Jose Alvarado will have to be sound against guard T.J. Gibbs (18.2 points per game in the ACC), a quick-release senior who is shooting 56 percent from three in ACC play, and sophomore Prentiss Hubb (12.1 ppg), a twitchy left-hander.  If they collapse the defense, they can create scoring opportunities for players like 6-6 swingman Dane Goodwin (40.8 percent 3pt.) and 6-10 stretch-four Nate Laszewski (8-17 3pt. vs. Georgia Tech last year).

Arbitrary yet still impressive stat:  Georgia Tech has two road ACC wins by 13 points or more points.  The last time that happened was 1998.

Now that we’re prepared, we hope you are as well.  Join us for pregame coverage starting at 8:00 p.m. ET on the Georgia Tech Sports Network from Learfield IMG College.  See you at McCamish.