Inside the Chart - Georgia Tech vs. NC State

Little did they know, it bore all the hallmarks of the games to come.

The double-digit deficit, the resilient comeback, the lofty shooting percentage, the white-knuckle finish – they could all be found over those first 45 minutes.  But there was one crucial difference between Georgia Tech’s season opener against NC State last Nov. 5 and its ensuing ACC games:  the Yellow Jackets closed out that night with a win.

James Banks’ free throws with 2.1 seconds left in overtime sealed an 82-81 win at PNC Arena – and a joyous pillage of a Raleigh-area gas station – but lately the Yellow Jackets have had a hard time duplicating those late-game heroics.  They’ve instead been stuck in a vortex of close losses, the latest a 68-64 setback at No. 6 Louisville Wednesday.  A late 10-0 run showed the Jackets’ guts, but Michael Devoe’s game-winning three-point attempt rimmed out with 10 seconds left.

Perhaps the sight of NC State again (14-5, 5-3 ACC) will trigger a stronger finish for Georgia Tech (8-11, 3-6 ACC) as it returns to McCamish Pavilion Saturday.  Considering their last three games against the Wolfpack have been decided by a total of six points – all wins — they may have that chance.

Georgia Tech won that game in November, but NC State fans may be quick to offer a few clarifications.

The Wolfpack played that game without two of its key rotation players, preseason All-ACC point guard Markell Johnson (ankle) and 6-10 forward D.J. Funderburk (suspension).  Johnson (2nd ACC, 6.6 assists per game) is a cunning operator in the pick-and-roll who can make teams pay from deep if defenders lay underneath screens.  Funderburk (13.1 ppg, 5.9 rpg), with arms as long as a CVS receipt, is a spring-loaded offensive rebounder and finisher around the rim.  And NC State still has 6-5 C.J. Bryce, the team’s leading scorer at 14.9 points per game, who had 24 points and 11 rebounds against Tech in November.  The redshirt senior made several “tough twos” against the Jackets and is a crafty pull-up jump shooter.

The Wolfpack may get back Johnson and Funderburk, but they could still be without two other players in center Manny Bates and forward Pat Andree.  Neither played in State’s 53-51 win over Virginia Monday, leaving the Wolfpack with just seven scholarship players.  NC State still runs an offense that’s heavy on pick-and-roll isolations, but perhaps owing to that shortened bench, they’ve had a far more middling tempo in ACC play compared to their first two years under head coach Kevin Keatts.  Nonetheless, the Wolfpack rank a healthy 15th nationally in offensive efficiency.

Can Tech’s guards get grimy going after rebounds and loose balls?  Can their bigs run the floor well?  Can they prevent Johnson from finding that groove unique to point guards?  Can they prevent Funderburk from putting Banks and Raleigh native Moses Wright, who have shot a combined 69 percent in their last two games against NC State, in foul distress?  Pay attention to those areas Saturday.

Alvarado, Pastner told us on the “Georgia Tech Basketball Report,” reminds him of Hall of Fame quarterback Brett Favre.

“Brett Favre never threw the ball out of bounds.  He always threw for the end zone,” the Yellow Jackets’ head coach remarked.

Like Favre, Pastner loves Alvarado’s moxie, loves his competitiveness.  But he also knows he can be prone to trying high-leverage, home run passes when a simple single will do (there’s that mixing of sports again).

The comparison may have come to mind after Pastner watched Alvarado make several tough shots but also commit a season-high six turnovers against Louisville Wednesday.  Pastner annually cautions against “pick-six” turnovers against N.C. State.  Can Alvarado tame those Favre-ish tendencies as he runs the offense against the Wolfpack?  He also could be key in the open floor:  the Yellow Jackets won in November in part because almost 30 percent of their points came off fast breaks (27 of 82). 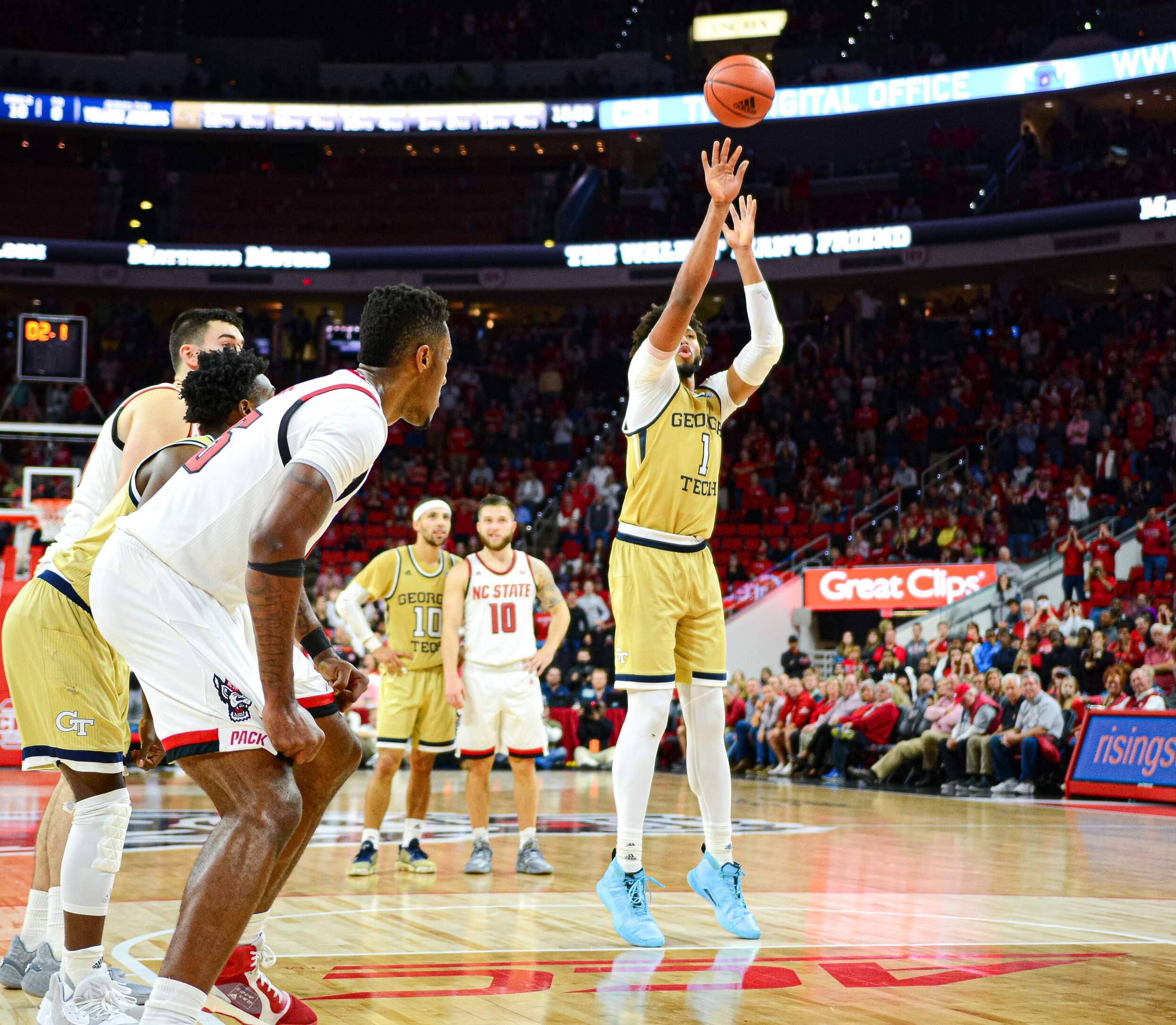 Unlike Virginia and Louisville, the Wolfpack are much friskier extending and denying on defense.  In the fullcourt, the Wolfpack press and trap along the sidelines; in the halfcourt, they like to jump passing lanes and shoot for breakaway steals.  Devon Daniels, a 6-5 redshirt junior, gives them a Jordan Usher-type athlete on the perimeter.

Their guards can take those chances, of course, because of the Pterodactyl length of Funderburk and freshman Manny Bates, who leads the ACC in blocks but may not play due to a neck injury.  Theft prevention will once again be key for Tech:  NC State forces the second highest rate of turnovers in the ACC behind Florida State.

Bubba Parham’s new beginning at Georgia Tech must have felt awfully similar to his first beginning at VMI.  In his first career game in 2017, Parham played…. NC State at PNC Arena in Raleigh.  In a not-so-subtle bit of foreshadowing, he finished with a team-high 22 points.

Parham is coming off his second scoreless game as a Yellow Jacket, playing 18 minutes but not attempting a shot against Louisville.  With NC State prone to shooting gaps and springing traps, Parham’s three-point shooting could be a much-needed pressure release.

James Banks will forever be known for his clutch free throw shooting against NC State.  Before his game-winning free throws with 2.1 seconds left earlier this year, the 6-10 senior had the game-winning and-one with 1.4 seconds left in Raleigh last March.

But Banks’ stat lines against the Wolfpack haven’t just been clutch.  They’ve been dominant:

And if it comes down to another set of steel-nerve free throws, Banks should be prepared.  He’s quietly shot 80.7 percent from the foul line in ACC play (21 of 26).