Inside the Chart - Georgia Tech vs. Miami

He understood the reasons, but that didn’t make him any happier.

James Banks trundled to the bench with 6:31 to go in the first half, subbed out by Josh Pastner with Georgia Tech trailing Clemson 23-20.  It wasn’t for the usual trinity of reasons for a sub (foul trouble, rest, strategy).  Pastner had instead chastened his 6-11 center for not running back in transition after his hook shot was blocked by Clemson’s Aamir Simms, who then beat Banks down the floor for a layup.

A “teachable moment,” as they’re euphemistically called.  Banks’ exile didn’t last long; he came back in 1:12 later.  Even he admitted his annoyance by it.  But whether that sub played a role, subconsciously or not, in what happened minutes later, Banks clearly showed he got the message about running the floor.

Banks’ vicious, posterizing dunk on Clemson’s Hunter Tyson provided the signature moment in Georgia Tech’s 68-59 win over Clemson at McCamish Pavilion.  But Tech’s win wasn’t defined by a flashy dunk so much as the Yellow Jackets’ sturdy, blue-collar defense against a Clemson team that came in averaging 77 points over its last three games.

With a chance to move to .500 in the ACC, Georgia Tech (14-14, 8-9 ACC) knows defense – those unglamorous anti-highlights – will have to propel them when they face Miami (14-13, 6-11 ACC) for the first time this year.  Enjoy the top notes, quotes and anecdotes from my chart as the Yellow Jackets gear up for another lively night at McCamish (8 p.m. ET, Georgia Tech Sports Network from Learfield IMG College): 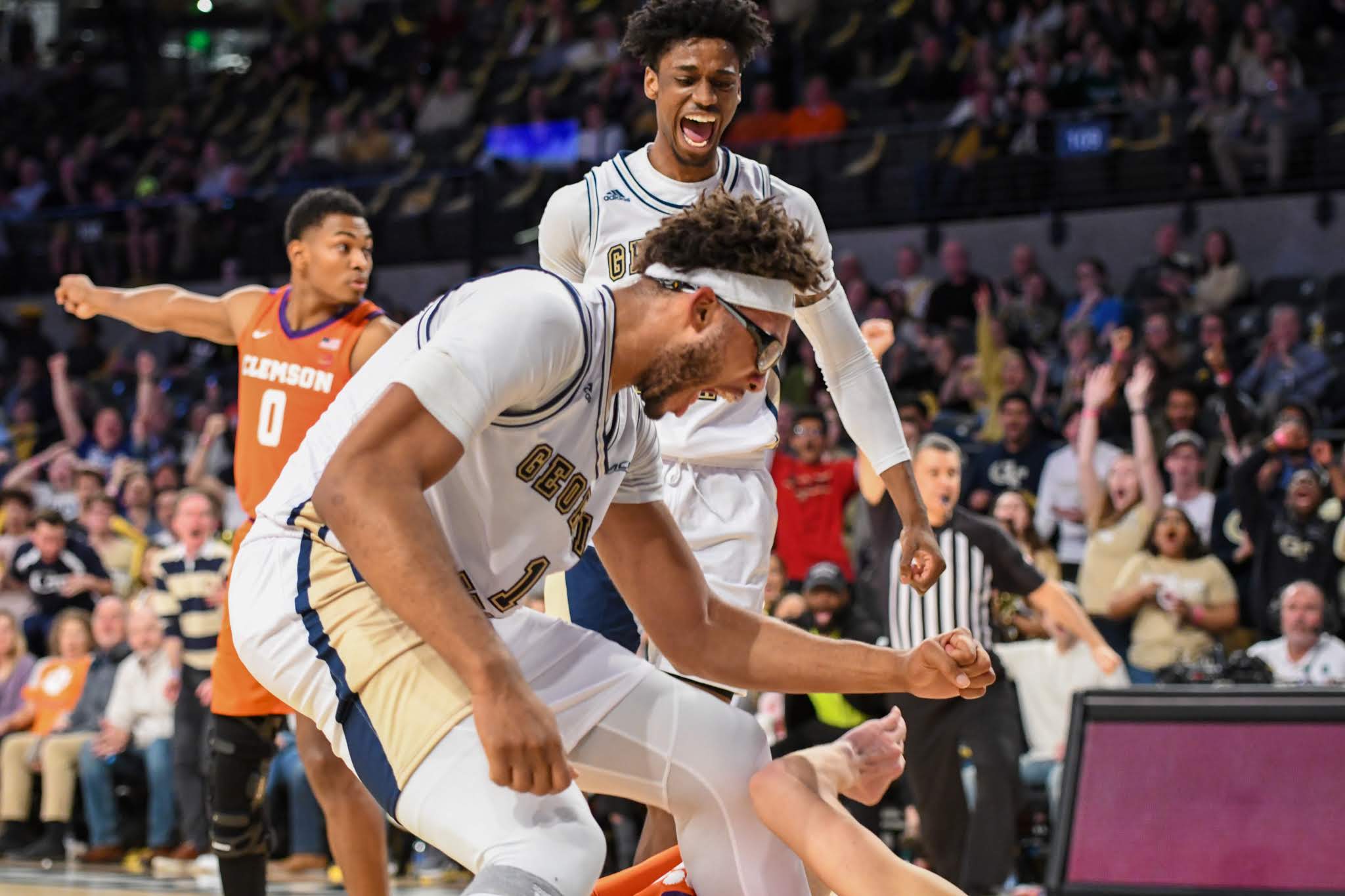 Banks’ choice of eyewear for Tuesday night’s game was more for function than style. (photo by Anthony McClellan)

With all due respect to Banks, the main attraction Saturday may be a battle royale in the backcourt between Tech’s Jose Alvarado and Miami’s 5-7 guard Chris Lykes.  A feisty, risk-taking junior, Lykes (15.2 ppg) uses change-of-pace dribbles to attack the tiniest crevices of a halfcourt.  Staying in front of him often feels like a cat chasing a laser pointer.

Lykes has only shot 25.0 percent (5 of 20) in two career games against Tech, but the Yellow Jackets were burned by the other targets in Miami’s pick-and-rolls last year.  Kickout threat D.J. Vasiljevic (13.5 ppg, 35.2-percent 3pt.) sank five three-pointers, while roll man Ebuka Izundu went 8-of-9 from the field in an 80-65 win in Coral Gables.  The Hurricanes also feature 6-3 freshman Isaiah Wong (7.7 ppg), a fluid finisher who leads Miami in scoring over the last five games, and 6-5 Oklahoma transfer Kameron McGusty (13.0 ppg), who struggled in Miami’s last game against Notre Dame.

Miami ranks last in the nation in assist rate, meaning the Hurricanes draw much of their offense off isolations and one-on-one drives.  It also makes them a team that earns a lot of free throw trips (they shoot an ACC-best 78.0 percent in league games), and a team that’s dangerous in late-shot clock situations.  Michael Devoe played perhaps his best defensive game of the season against Clemson.  Bubba Parham was “excellent” according to Pastner.  And of course, Alvarado will bring his usual ultraviolet intensity to the defensive end.  For an offensively motivated team like the Hurricanes, how well can the Yellow Jackets lock in defensively to start the game?  They’ll also need crisp closeouts and be well-connected in their transition defense.

His dunk made a statement.

His eyewear?  Not so much.

Banks played his first game of the season Tuesday wearing black-rimmed protective glasses, which he secured with a white headband.  They were neither for fashion nor injury:  Banks had been having trouble with his contacts heading into the game.  He actually wore them at Georgia Tech’s shootaround against Louisville but opted to play without them.

That didn’t stop Banks’ teammates from giving him some good-natured ribbing.  A few thought he looked like Tacko Fall, the Boston Celtics’ 7-6 rookie center (the fact Banks stands 6-10 surely aided in the comparison).  Michael Devoe, a noted Harry Potter fan, suggested he looked like the book series’ title character.  But the best effort may have gone to junior Evan Cole, who asked, “Who was that player for the Bulls?  Bill Cartwright?”  He actually meant Horace Grant (though the reference to a 30 year-old NBA team was duly noted).

Jose Alvarado has been up to the task in his battles with Miami point guard Chris Lykes. (photo by Anthony McClellan)

A number to pay attention to Saturday: Georgia Tech has held its last four ACC opponents at home to less than 60 points.

Miami is 0-5 this year when scoring under 60 points.

Georgia Tech has also put barbed wire around the three-point arc during its home-court win streak.  Check out their last three games against the three:

Contrast that with the Yellow Jackets, who have shot 39.5 percent (19-of-48) from three-point range in that span.

Expect Miami to mix man-to-man and zone defenses Saturday; the Hurricanes switch almost everything in their man, similar to Florida State.  They’ll also “X” on pick-and-rolls, a popular NBA coverage where the guard switches to the ball-side corner and the corner defender moves to the roll man.  In spite of that, Miami ranks last in the ACC in defensive efficiency in conference games.  Tech will have to be strong with its pivots and avoid the careless turnovers that Miami can turn into fast-break baskets.

Now that we’re prepared, we hope you are as well.  Join us for pregame coverage starting at 7:30 p.m. ET on the Georgia Tech Sports Network from Learfield IMG College as well as our TuneIn and GT Gameday apps.  See you at McCamish.

#BuiltDifferent - On a Mission
The Birth of Georgia Tech Basketball