Inside the Chart - Georgia Tech vs. Clemson

So did Louisville February 15.

Toughest home court advantage in the ACC this year?  Forget Cameron, the Tucker Center, or any of the other usual suspects.  That distinction might belong to Littlejohn Coliseum, where the homestanding Clemson Tigers (15-14, 9-10 ACC) have beaten three top-10 opponents in conference play.

Georgia Tech (16-14, 10-9 ACC) knows that treachery well:  the Yellow Jackets have dropped 13 straight at Littlejohn dating back to 2005.  That may make the task of clinching their first winning ACC record since 2004 a little more arduous.  But in a season where Georgia Tech has time and again shown its resilience, can the Jackets end their season with one last hard-fought win – and one last epic gas station trip to close out 2020? 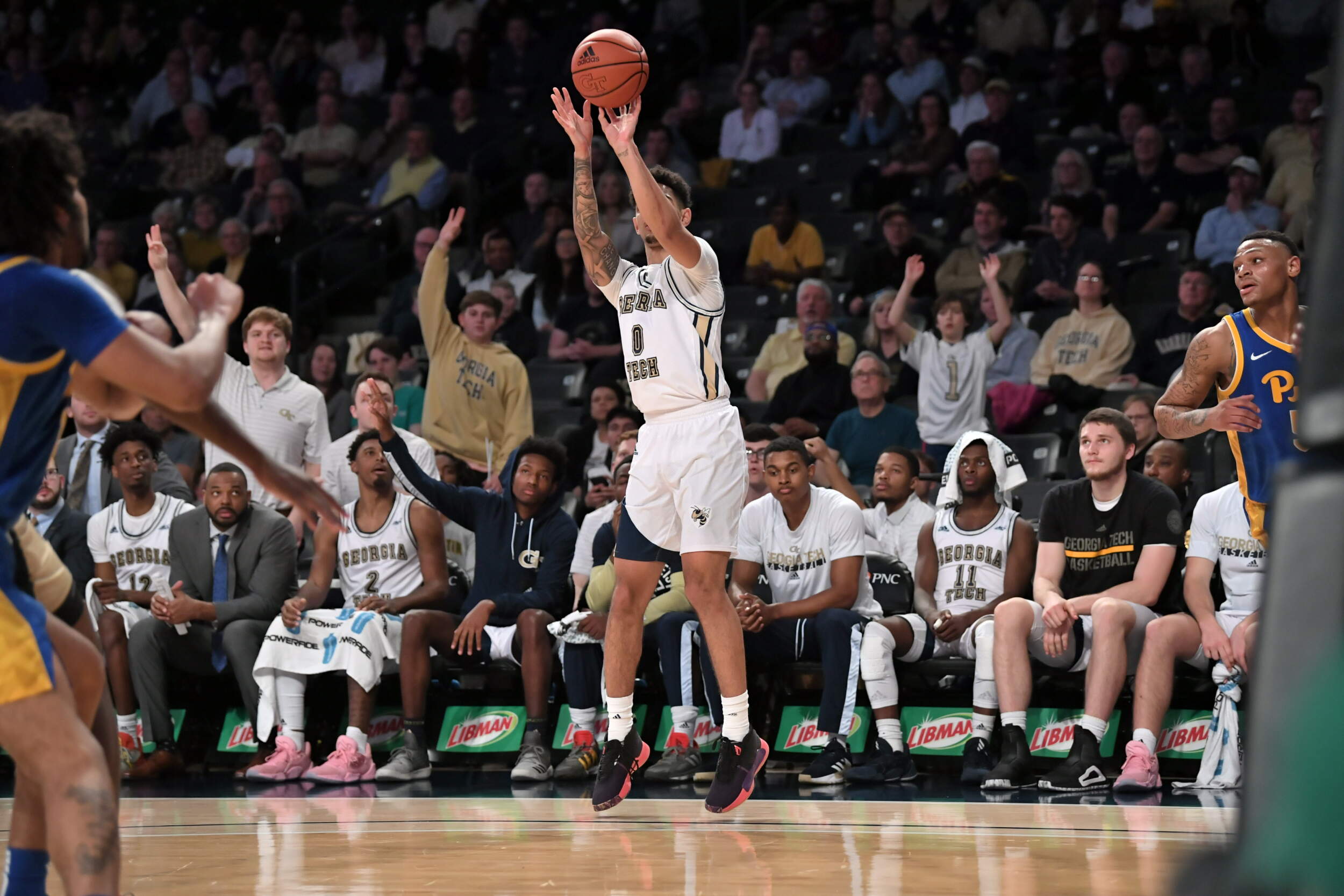 Michael Devoe has made a three in nine straight games and has hit 44.4 percent of them against the ACC. (photo by Danny Karnik)

Perhaps that’s why Michael Devoe’s three-point shooting has also felt understated this year.  With three more threes against Pittsburgh, the sophomore from Orlando, Fla., enters the season finale shooting 42.9 percent (51-of-119) from beyond the arc.  He’s on pace for the best three-point percentage by a Yellow Jacket with at least 100 attempts on the season since Anthony Morrow in 2007-08 (81-of-181, 44.8%).

Devoe and the Yellow Jackets will face a defense Friday that coerces a lot of three-point attempts.  In ACC play, Clemson forces 43.3 percent of opponents’ shots to come from three, the second-highest percentage in the league.  Part of that is due to the way the Tigers “dig” on dribble-penetration, which results in clogged paints and hard recoveries on shooters.

Over their last six games, Devoe and Jose Alvarado have shot a combined 41.0 percent from three.  Their marksmanship may come in handy Friday night.

At last the story can be told: as he revealed on last week’s “Georgia Tech Basketball Report,” Devoe says he wears #0 in honor of Minnesota Timberwolves guard D’Angelo Russell, who played in the same AAU program as him.  Russell also starred at Montverde Academy in Montverde, Fla., where Devoe finished up his career.

Josh Pastner tried to warn you.

Simms, though, didn’t score for the rest of the game, and Tech pulled away to win 68-59.  As they stretched out their lead, the Jackets did a better job denying slips on screens, which Clemson used to break them down in the first half.  Pastner also praised Bubba Parham’s work on freshman point guard Al-Amir Dawes (4-10 FG) and Devoe’s work on 6-5 John Newman III (1-7 FG).

Thanks to that on-ball defense, the Tigers couldn’t put the Jackets in rotation and make the whip and swing passes that often lead to their three-pointers.  Clemson entered the game scoring the highest percentage of its points off three-pointers in the ACC.  Check out what they did against Tech:

Head coach Brad Brownell said his team “was soft offensively” in a 70-58 loss to Virginia Tech Wednesday.  Can the Yellow Jackets force the Tigers into taking tough two’s and win the 50-50 balls that helped them at McCamish? 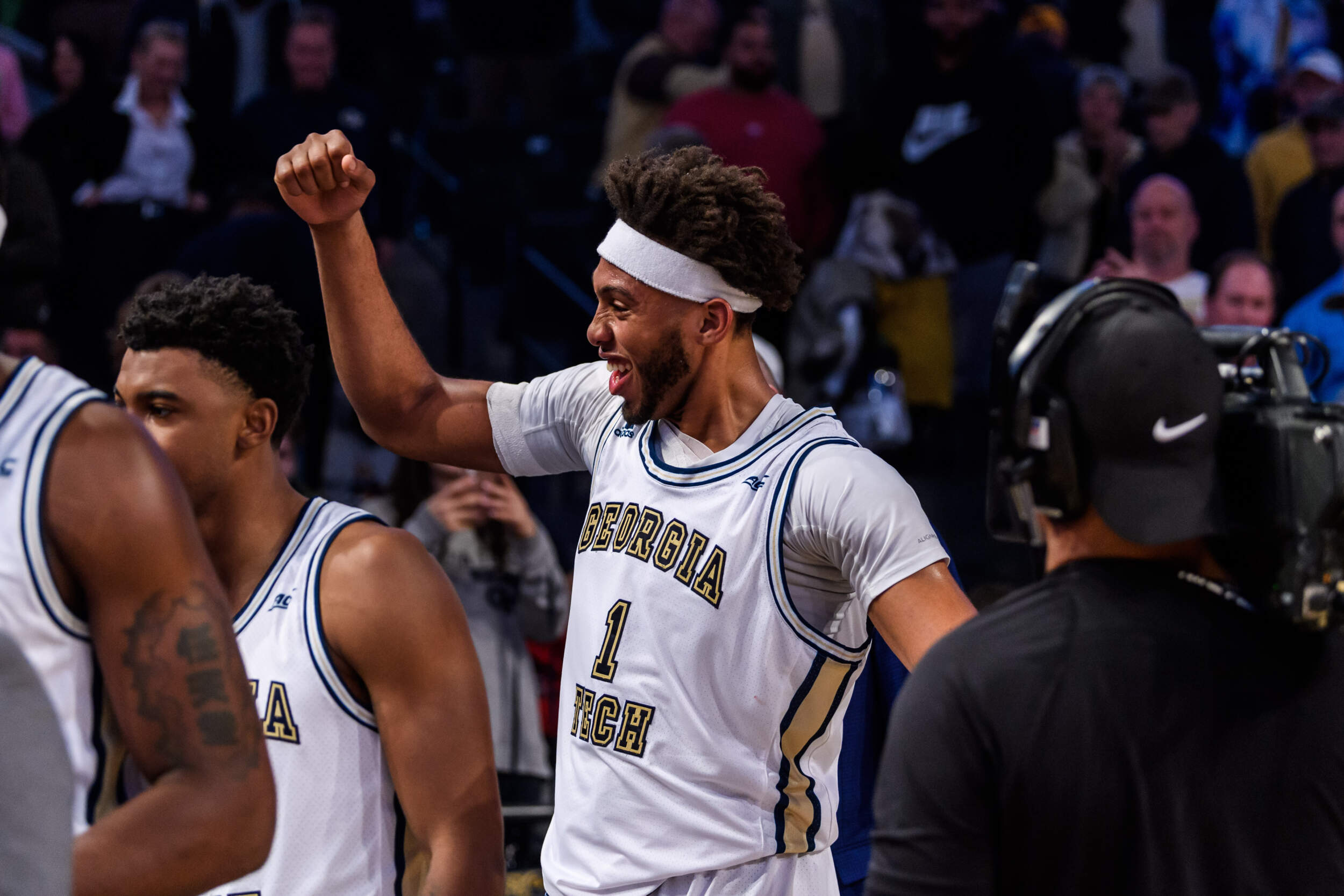 James Banks III scored only two points against Pittsburgh, but had 10 rebounds, four blocked shots and four steals to post a plus/minus rating of plus-16. (photo by Danny Karnik)

Thanks to some condensed scheduling, Tech and Clemson play twice over the final four games of the regular season.  If that feels like an unusually late time of year for the Yellow Jackets and Tigers to meet, you’re not wrong.  Their game at McCamish marked the latest in a season that Georgia Tech and Clemson have met for the first time since…

The teams have played twice in a season every year since Tech joined the ACC in 1979-80.

Josh Pastner had aquatic animals on his mind when discussing his frontcourt against Clemson.

“They’re not a great shot-blocking team.  We’ve got to be able to get ducks and seals,” Pastner said in our pregame interview last week.

The results were mixed:  James Banks attempted only four field goals but had 10 rebounds, 4 blocks, and 4 steals and finished with a team-best +16 plus-minus.  Wright, coming off a career-high 33 points against Syracuse, needed 12 shots to reach 10 points.  With Clemson playing Simms at the “5,” Banks and Wright figure to have a height advantage most of the night.  How efficiently can they score around multiple smaller defenders Friday night?

Also, something you may have missed last month: before he joined the post-game handshake line, Banks intercepted Clemson grad transfer Tevin Mack (12.1 ppg) and gave him an embrace.  The two were teammates at the University of Texas during the 2016-17 season.

Now that we’re prepared, we hope you are as well.  Join us for pregame coverage starting at 6:30 p.m. ET on the Georgia Tech Sports Network from Learfield IMG College as well as our TuneIn and GT Gameday apps.  It’s been a pleasure taking you inside our charts this season.  Let’s close it out with one last win.