Inside the Chart - Georgia Tech vs. Clemson

He sensed the indecision in that imperceptible way only point guards can.

Jose Alvarado crow-hopped behind a screen from James Banks and saw NC State’s defenders caught at an awkward angle.  Their uncertainty may have only lasted a split second, but Alvarado knew to pounce.  The junior lowered his shoulder and drove the right side of the lane, getting a half-step on his defender Markell Johnson.  His layup missed, but it had the collateral effect of forcing center D.J. Funderburk to come over and challenge the shot.  That allowed Banks to have an uncontested look at two tip-ins in front of the rim, the second falling gently through the net.

Remarkably, Georgia Tech (13-14, 7-9 ACC) hasn’t trailed at McCamish Pavilion since.  With wire-to-wire wins over Morehouse, Virginia Tech and Louisville, Tech has led for the last 122 minutes and 41 seconds at home, a span of more than two hours.  With a three-game homestand looming, it could serve as a powerful springboard as the Jackets look to break from the pack in the ACC standings.  It could also be a much-needed antidote against Clemson (14-12, 8-8 ACC), which has won three straight games by an average of 17.6 points.  The Tigers shot 68.9 percent in a blowout win over Boston College Saturday, a game in which they never trailed either.

Enjoy the top five notes from my chart as the Yellow Jackets work the late shift to try to stop a five-game losing streak against the Tigers (9 p.m. ET, Georgia Tech Sports Network from Learfield IMG College):

Jose Alvarado has made a three-point field goal in 14 straight games. (photo by Chuck Wainwright)

It seems counterintuitive for a team that attempts the highest volume of threes in ACC play.  But according to Josh Pastner, Clemson’s success from long range hinges on its “5” man.

At 6-8 and 240 pounds, Aamir Simms doesn’t have the size of a typical ACC center, but the junior has earned first-team All-“Hard Guard” status from Tech’s head coach.  Simms leads Clemson in scoring (13.3), rebounding (7.2) and three-point percentage (40.3) while also leading the Tigers in blocks (20) and ranking second in steals (27).  Clemson uses him all over the floor, drawing out opposing bigs in a manner similar to Notre Dame’s John Mooney.  He’s deft at both pick-and-rolls and pick-and-pops, and can also post up on undersized defenders.

With Simms the focal point, opponents often get caught in rotation if they over-help on Clemson’s screens.  That frees the floor for players like grad transfer Tevin Mack (12.3 ppg), an undersized but athletic “4”, freshman point guard Al-Amir Dawes (8.6 ppg), and emerging swingman John Newman III (9.8 ppg).  Unlike Syracuse, which scores most of its three-pointers off the dribble, almost 90 percent of Clemson’s threes are assisted according to Synergy.  The Tigers also run some Princeton-style action through the elbow like the kind Georgia Tech ran earlier in the year.

But as Pastner sees it, it all comes back to Simms.  How do the Jackets defend him?  And more importantly, who do they defend him with?  Those decisions could lay the groundwork for Tech’s whole defensive performance Tuesday:

Your push-meets-shove statistic of the night:

In its last four games, Clemson has made 44.4 percent of its three-pointers against Tech (33 of 72).

In its last four ACC home games, Georgia Tech has only allowed 19.7-percent three-point shooting (16 of 81). 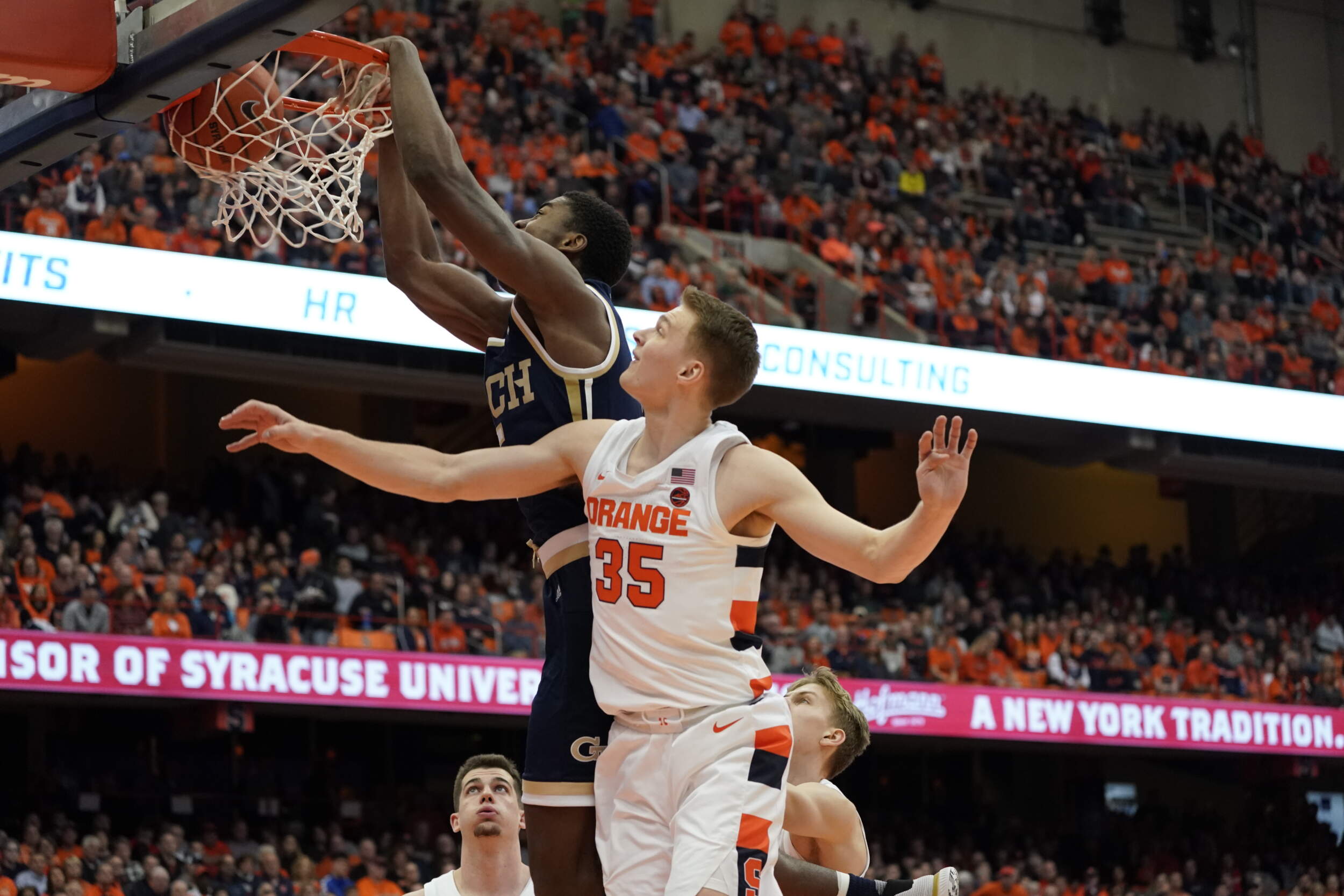 After a 4-point performance against Florida State, Jose Alvarado didn’t shy from the accountability.

Alvarado may not lack for opportunities Tuesday.  In addition to attempting the highest rate of threes in the ACC (47.7 percent), Clemson forces the second-highest three-point rate in ACC play – 43.7 percent of opponents’ field goal attempts come from beyond the arc.

Pastner attributes it to the way the Tigers “dig,” meaning the ball-side help defender takes a step into the driving lane to ward off penetration before recovering to his man.  That allows the Tigers, who rarely give up transition baskets, to play in gaps and congest driving lanes.  Opponents often have to settle for threes, unable to dynamite their way into the paint.

Volume three-point shooting isn’t the Yellow Jackets’ forte.  Can Alvarado, Michael Devoe and Jordan Usher beat the digs and get consistent paint touches?  Usher will look to rebound from a 1-for-8 night against Syracuse; Devoe will look to bounce back from a scoreless second half against the Orange.  More than that, Pastner wants to see his guards grab more 50-50 balls and defensive rebounds than they did versus Syracuse.

Want another illustration of the improbability of Moses Wright’s stat line against Syracuse?

On Saturday, he scored 33 points against the Orange.

As a freshman, Wright had 34 points total in ACC play.

His bounciness around the rim could be needed Tuesday.  Defensive rebounds don’t come easily against the Tigers:  Clemson ranks third in the ACC in defensive rebounding percentage in conference play (24.3 percent).

Clemson grad transfer Curran Scott gives the Tigers another deep-range threat off the bench, shooting 44.4 percent from three in ACC play.  Scott arrived at Clemson via Tulsa, though the Edmond, Okla., native began his career at the University of Charlotte.

Yes, the Oklahoma native was recruited to Charlotte by the most famous Oklahoman to roam The Flats, Enid’s Mark Price.

Now that we’re prepared, we hope you are as well.  Join us for pregame coverage at 8:30 p.m. ET on the Georgia Tech Sports Network from Learfield IMG College as well as our TuneIn and GT Gameday apps.  See you at McCamish.  –AD–