Inside the Chart - Georgia Tech vs. Boston College

As Georgia Tech learned this week, there’s no solace in a near-upset.

The Yellow Jackets battled fiercely with No. 2 Duke, but turnovers and missed shots down the stretch spoiled Tech’s chances at a seismic ACC win.  Near-upsets sometimes lead to a letdown the next game.  Or sometimes that frustration elevates them into an even more determined effort the next time out.

That’s the fork in the road facing Georgia Tech (7-8, 2-3 ACC) as it dives into its next game against the surprise second place team in the ACC, the Boston College Eagles (9-6, 3-1 ACC).  Enjoy the top notes from my chart in preparation for Saturday’s matchup in Chestnut Hill (6 p.m. ET, Georgia Tech Sports Network from Learfield IMG College):

Had they beaten Duke, the Jackets would have upstaged BC for the most head-turning win in ACC play this week.  On Tuesday Boston College upset defending national champion Virginia 60-53, outscoring the Cavaliers 15-3 over the final 5:25.  Even more impressive:  the Eagles did it without leading scorer Derryck Thornton (ankle) and starting center Nik Popovic (back), who hasn’t played since early December.  Their 0.95 points per possession was the highest allowed this year by Virginia, which led the nation in defensive efficiency.

Josh Pastner praised BC head coach Jim Christian as one of the best offensive minds in the country, but the Eagles’ unlikely ascent has been fueled by their defense.  Boston College ranks 13th in the nation in steal percentage, getting a steal on 12.7% of their defensive possessions.  Georgia Tech has faced two teams this year with a higher steal percentage, Arkansas and Florida State; the Jackets committed a combined 44 turnovers in those games.

Without Popovic, the Eagles switch one through five, take charges and play aggressively with their hands when ball handlers get around screens.  At his press conference Friday, Pastner repeatedly called Saturday’s contest “a guard’s game.”  On top of scoring 41 points, Jose Alvarado and Michael Devoe only had one turnover in 89 minutes in Tech’s win over BC last year.  Can they be strong in their stride-stops and give the Yellow Jackets a disciplined performance Saturday? 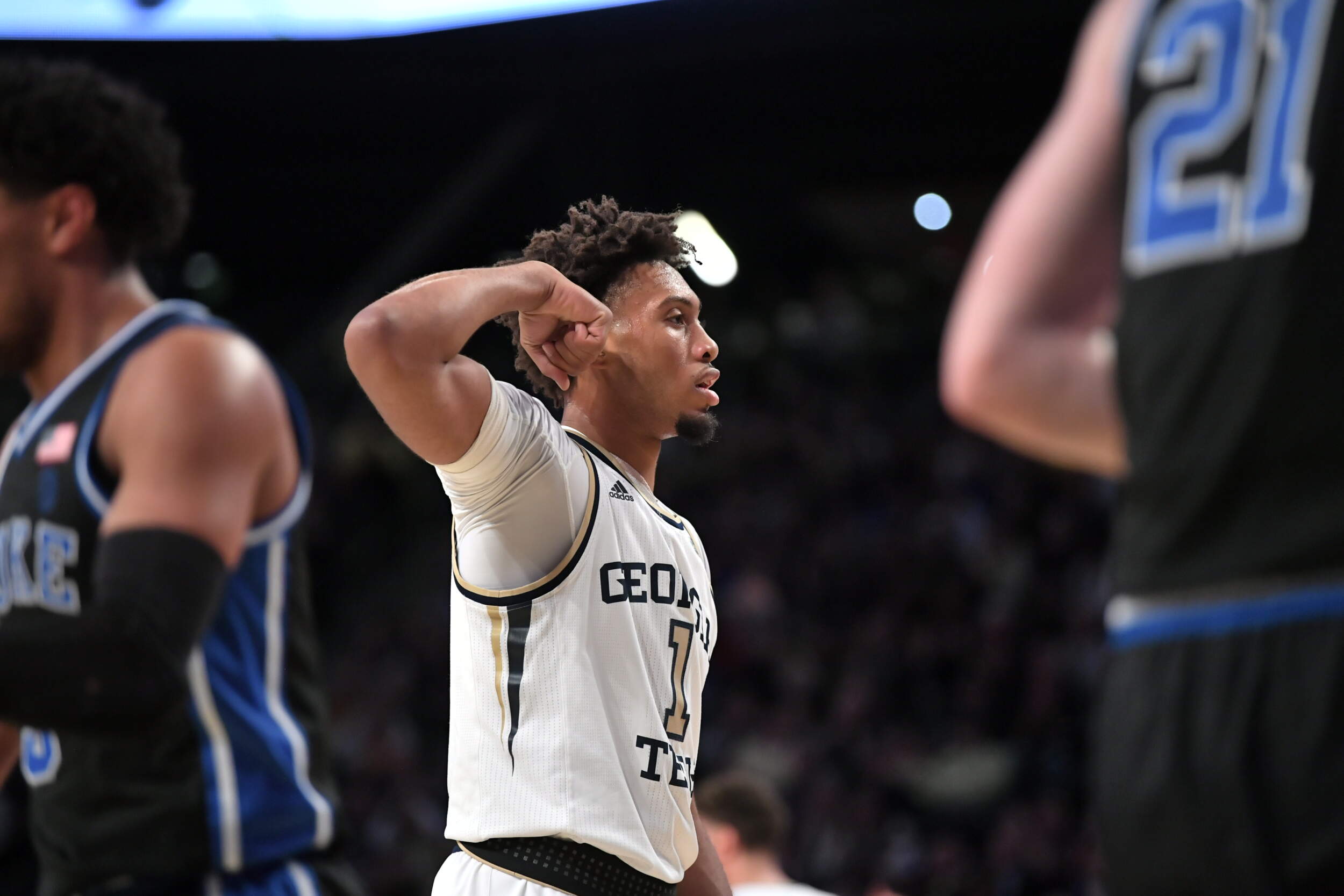 Defensive rebounding, which can help activate Georgia Tech’s transition offense, may be the bigger key Saturday.

The Yellow Jackets may not have to contend with the 6-11 Popovic, who remains out indefinitely with back spasms.  Cue the exaggerated telenovela exhale:  Popovic has had career highs in points in consecutive seasons against the Jackets, scoring 20 against Tech in the 2018 ACC Tournament and 24 in an overtime loss last March.

The Jackets, though, will still have to deal with another beguiling forward in multi-tool Steffon Mitchell (6.9 ppg, 8.6 rpg), one of the more unsung players in the ACC.  Mitchell acts almost as a point-forward in the Eagles’ offense, a face-up “4-man” who’s both a rugged rebounder and gifted passer from the post.  He’s also a deflection machine: how many 6-7, 220-pound players lead their conference in steals like Mitchell (2.4 per game)?  He may not be the Eagles’ flashiest player, but he’s arguably their most valuable.  Pay attention to how Georgia Tech defends him Saturday. 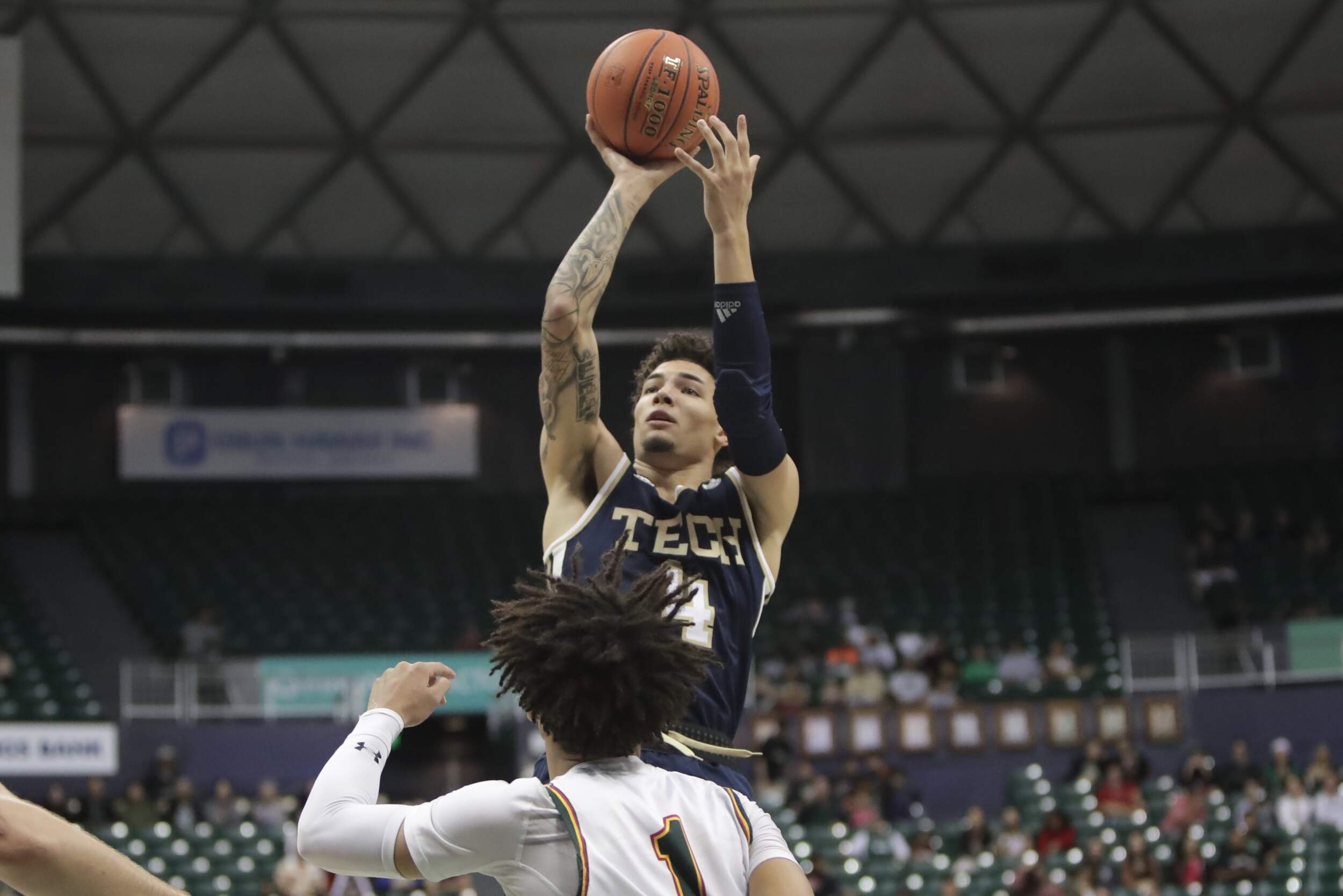 After playing his freshman season at Duke, Derryck Thornton repatriated to the ACC this offseason, joining Boston College as a grad transfer following the departure of Ky Bowman to the NBA Draft.  The senior currently leads the Eagles in scoring (13.4) and assists (3.4).  Along with agile freshman Jay Heath, who led BC with 17 points against Virginia, the Eagles have an efficient, re-tooled backcourt.

Between his ACC stints, Thornton played two seasons at Southern Cal, where he was teammates with Georgia Tech’s Jordan Usher.  Fun fact: last year Thornton missed a non-conference game against Cal State-Bakersfield with a sprained ankle.  Usher scored a career-high 22 points in his absence.

Worth noting:  Georgia Tech has shot 50 percent or better in each of its last two games against Boston College.

Now that we’re prepared, we hope you are as well.  Join us for pregame coverage starting at 5:30 p.m. ET on the Georgia Tech Sports Network from Learfield IMG College.  Gas stations, you’ve been warned.  See you in Chestnut Hill.