The postgame handshake line has been eliminated this year, sacrificed in the name of COVID, but Jose Alvarado and Mike Krzyzewski still sought each other out in the aftermath of Georgia Tech’s 75-68 loss to Duke at Cameron Indoor Stadium Tuesday.  The senior guard and Hall of Fame coach, both fierce competitors, needed to exchange their respects, if only for a fleeting moment, before going their separate ways.

Krzyzewski’s side of the chat involved a quick question.

Sadly, he wasn’t referring to a certain “Inside The Chart” author.  It turns out Alvarado, who finished with 26 points, five assists and three steals across 40 gallant minutes against the Blue Devils, played AAU ball for Krzyzewski’s nephew. Andy Borman, a former Duke walk-on, coached Alvarado and junior Khalid Moore on the New York Rens.

As Georgia Tech (7-4, 3-3 ACC) looks to rebound from a disappointing loss to the Blue Devils, the respect for Alvarado has continued to multiply across the ACC – and as of Tuesday, the Krzyzewski family tree.  In his last five conference games, the Brooklyn native has posted some ACC Player of the Year-worthy numbers:

Alas, his lowest offensive rating of the season came against Georgia Tech’s next opponent.  On December 15 in Tallahassee, Alvarado scored a season-low seven points while dishing out one assist in a 74-61 loss to No. 15 Florida State.  The Seminoles (10-2, 6-1 ACC) have won five straight by an average margin of 18.6 points.  Aside from – and possibly including – No. 8 Virginia, there may not be a hotter team in the ACC.

Then again, there may not be a hotter player in the ACC than Tech’s tenacious senior guard. 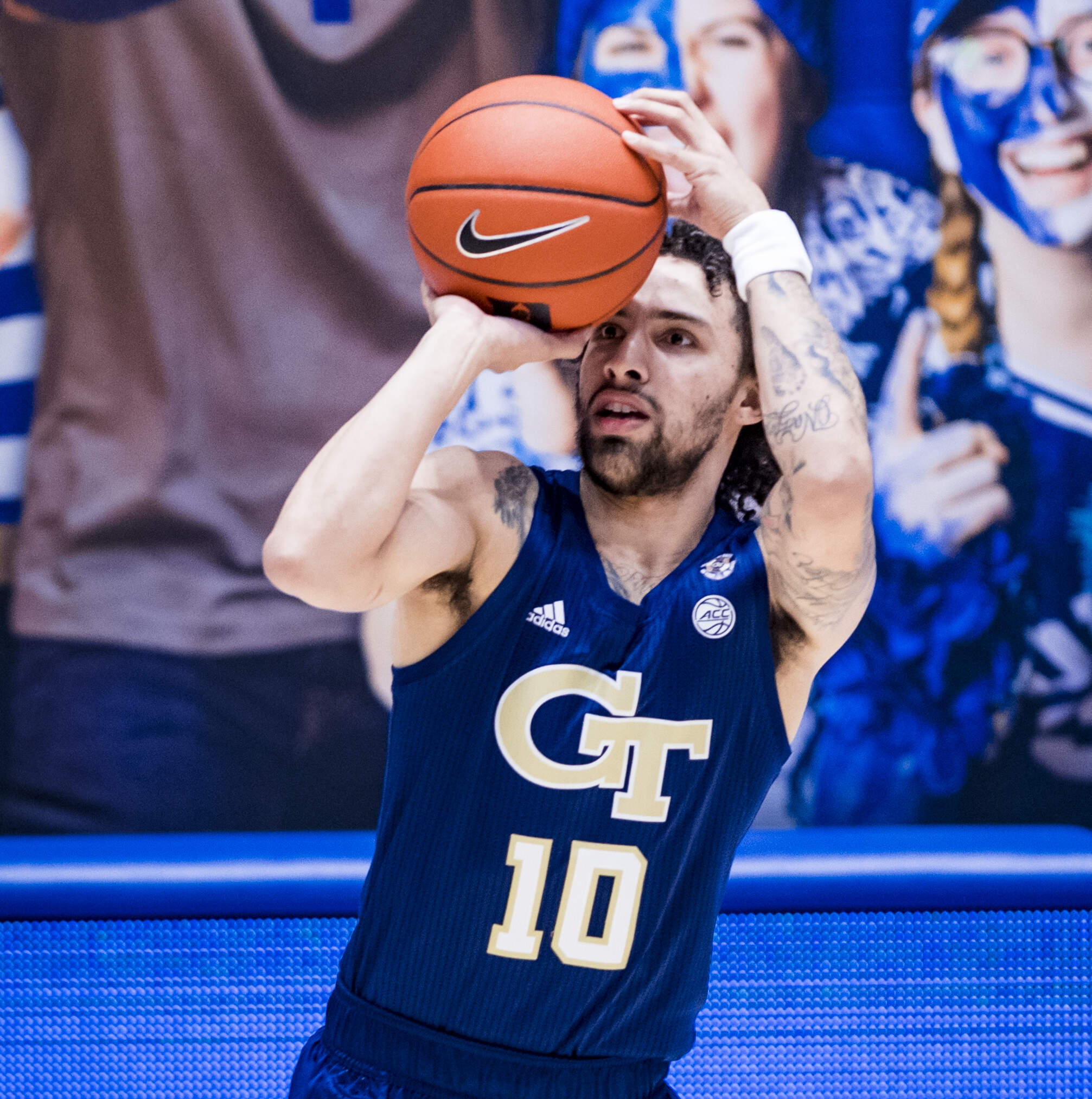 In its first meeting with FSU, Georgia Tech trailed by 16 with 13 minutes to go before launching a spirited, 15-0 run over the next 3:02.  The Yellow Jackets could draw no closer, but Josh Pastner doesn’t look at anything over the last 9:58 as the difference to the game.  Rather, he points to Tech’s nine first-half turnovers as the thing that did them in.

The Seminoles, as has become their habit under head coach Leonard Hamilton, try to smother teams with their length, depth and agility.  They swarm dribble penetration (they lead the ACC in 2pt. FG% defense in conference play).  They deny and play up the line, making it a chore for teams to get into their offense.  They also blitz the high post, a tactic they used often on Tech’s Moses Wright.

In spite of that, Pastner said his team got the looks it wanted against Florida State; it simply couldn’t cash in on them (the Jackets shot 20 percent from three against the Seminoles, their second-lowest percentage of the season).  Worth noting for Saturday:  FSU primarily played 6-6 Anthony Polite, a fluid, long-armed lefty, on Alvarado in their man-to-man.  He’s missed Florida State’s last three games with an injury.

Because of their aggressiveness swarming from the help side, Tech should have three-point opportunities on Saturday.  Florida State and Tech rank 1-2 in the ACC in three-point percentage in conference play.  Can Tech avoid lulls and cash in on threes more consistently than they did in Tallahassee?

Who else may be primed for a bounce-back Saturday?  Pay attention to Michael Devoe for two reasons.  The junior has strung together some solid performances against FSU lately, and his shooting splits have been decidedly McCamish-friendly:

Oddly, Devoe shot 47.5 percent from three in road/neutral games last year, compared to 41 percent at home.  At 6-5, he’s well-equipped to get his shot off over FSU’s length. 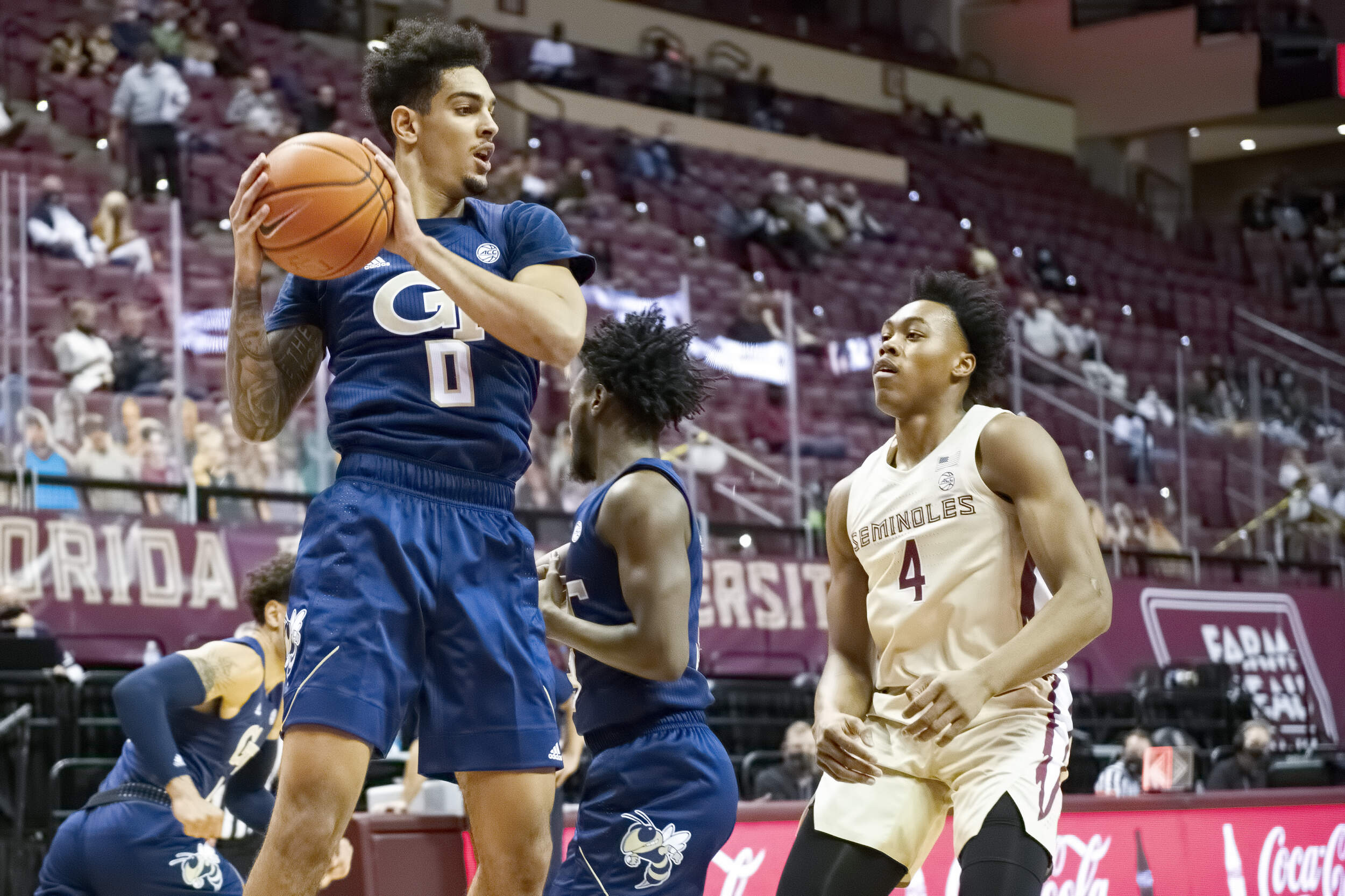 Last year Florida State played 6-8 freshman Patrick Williams, an eventual lottery pick who wore No. 4, as its sixth man.  The Seminoles have now repeated the formula with 6-9 freshman Scottie Barnes, another future lottery pick who wears No. 4 partly in tribute to Williams.  Barnes has come off the bench for the past three games as he works back from an ankle injury.

Barnes was still in the starting lineup when he scored a team-high 16 points against Tech last month.  His swooping, one-handed dunk stopped Tech’s 15-0 run and stabilized the Seminoles’ offense down the stretch.  Like Duke’s Jalen Johnson, Barnes is an intuitive passer, has handles that belie his size, and can long-stride into the lane and finish with a soft touch.  The Seminoles have also gotten a lift from 6-4 senior RayQuan Evans (11.2 ppg ACC, 2nd team), who missed the first Georgia Tech game.

There’s no one focal point in the Seminoles’ ball-screen continuity offense.  Don’t take that as a weakness:  Florida State has shot 52.8 percent during its five-game ACC win streak.  Despite cutting the deficit to one in the second half, Tech labored through its worst defensive rating of the season against FSU last month.  Among the keys Saturday: win 50-50 balls, particularly on defensive rebounds; build a wall in transition; and not “open the gate” on FSU’s dribble-drives (the Seminoles like to reject ball screens).

It may have been overshadowed by the losses, but in consecutive games Moses Wright has set career highs in blocks (5 vs. Virginia) and assists (6 vs. Duke).  He also set an ACC career high in rebounds (14 vs. Duke).

Florida State leads the nation in Average Height (79.2 inches per rotation player), which can often engulf undersized “5” men.  Can the senior find the angles while working from the high and low post against the Seminoles’ exhausting length?  And with so much size scaring away potential layups, can Georgia Tech get its pull-up and floater game reactivated?  They were only 7-of-22 on paint shots outside the restricted area against Virginia and Duke.

As he mentioned on the Georgia Tech Basketball Report, Jordan Usher may have fallen for some subliminal advertising as a kid.  The senior, who began his career at Southern Cal, said his Mom put a 2004 Georgia Tech Final Four basketball in his room growing up.  Usher said his Mom, who played basketball for one year at the University of Florida, had always secretly hoped her son would attend Tech.